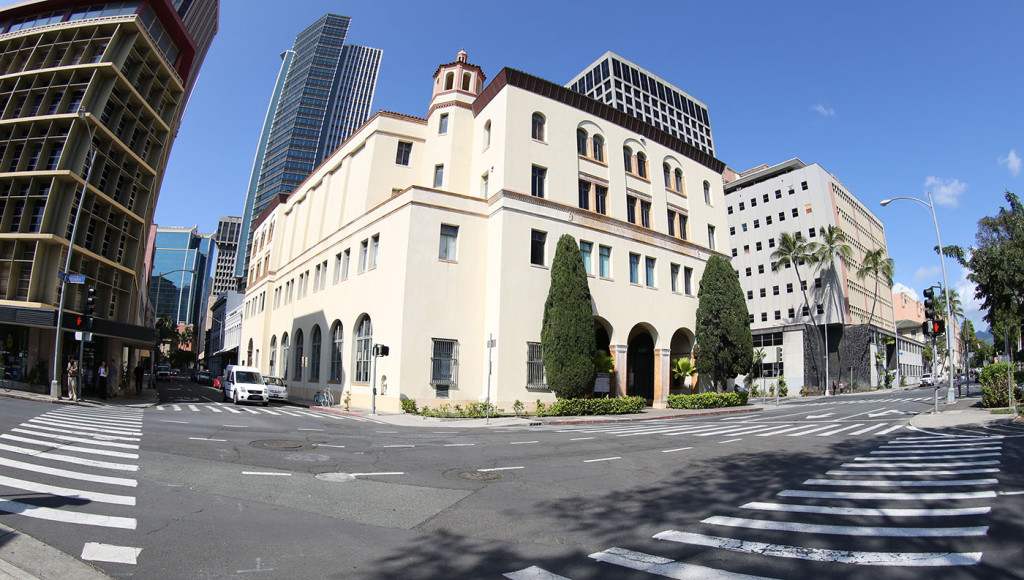 The federal government's takeover of Hawaii proved extremely fortuitous for Hawaiian Electric. So was the involvement of leading local families.
By Eric Pape / July 6, 2016
Scroll to Read

Turn-of-the-century Honolulu was a booming place.

Hawaii’s business and political leaders were looking across the Pacific and hoping to attract hordes of travelers to the shimmering beaches of Waikiki, an area some envisioned as a new Southern California.

Hawaiian Electric Co. was crucial to that vision. In 1901, soon after it laid wires to Waikiki, the first grand hotel in the islands, the Moana, opened its doors with 75 rooms. The first electric-powered elevator in the islands was among its many perks.

In those early years, HECO was developing unique expertise as it set up and began to maintain a fast-growing power system in and around one of the most remote island cities on earth.

Company engineers were laying the first building blocks of the infrastructure that would remain in place for decades. That meant getting to know local homes, the right pathways for moving power around the island and how electricity should be managed between the sea and the Koolau mountains.

It was also the company’s first taste of a natural monopoly on the power system that it still holds today. The exclusive 10-year franchise from the Hawaii government that HECO was awarded in 1893 gave the company an enormous head start in the energy sector at a particularly crucial time.

When the Moana Hotel opened in 1901 it offered a hint of the tourism economy that Hawaiian Electric would help energize for generations. (Historic photo courtesy of JLB Press) Move the red arrow to the right to change the picture from past to present.

In 1898, the U.S. annexed Hawaii and made it a territory. Federal resources began flowing to the islands, creating more momentum for development.

HECO began to network in Washington, D.C., forging political connections that would only grow stronger and more significant over the next century.

In those early years, Hawaiian Electric’s temporary franchise insulated it from direct competitors in the electricity market.

But it was an era when trusts and monopolies were generating great suspicion in the United States. And even in isolated Hawaii, critics began to blame a lack of competition for problems that HECO’s customers were experiencing.

“That arrant monopoly, the Hawaiian Electric Company, gave another instance last night of its utter disregard of the rights of the people and of its patrons by keeping them without light for a period of one hour and one-half,” a Dec. 22, 1900, article in the Honolulu Republican newspaper proclaimed.

“If this were a country where fierce electrical storms raged there would be some excuse for this condition of affairs but as it is there is no excuse excepting an indifference to the public demands,” the author wrote.

“With an exclusive franchise, such as that possessed by the Hawaiian Electric Company, there is all the more reason why it should be provided with duplicate machinery and ready at all times to furnish light and power to its patrons no matter what might happen.”

Hope resided, the writer argued, in the fact that HECO’s exclusive franchise would expire a few years later.

“Fortunately,” the author added, “there will be other electric companies in Honolulu ere many more months.’”

The fact that its exclusive grip on Honolulu’s electricity market was set to expire in 1904 loomed large for HECO. The company knew it would need the approval of federal authorities to retain any sort of dominant position.

So the company reached out to its friends in Washington, arguing that its decade of exclusive experience building an electricity network in Honolulu should give it the right to continue on without the threat of competition.

As it turned out, Congress agreed and gave HECO another franchise to provide electric service to Honolulu — as long as the company provided it to everyone. The government also required HECO to lower its rates, implement a sliding rate scale and install electric meters.

In exchange, Congress made the deal never-ending.

From a business perspective, that was great news. The company could start planning for the future.

Soon after, in 1905, HECO switched from coal to oil to generate most of its power as a cost-saving measure. (Ironically, coal is now the cheapest way that Hawaiian Electric generates electricity.) The cost to ratepayers was a big issue in an era when electricity was quickly evolving from a luxury into a necessity for residents.

Even in the early 1900s, customers were complaining that Hawaiian Electric was becoming too big for its britches — so influential, so powerful and so unconstrained that it seemed to be disregarding the public interest.

In 1905, one local electrician captured that particular public sentiment when he criticized HECO’s efforts to take control of the Nuuanu Government Electric Light Station. A takeover “would give the Hawaiian Electric Company a monopoly which might become a dangerous one for the community,” an article in the Evening Bulletin reported.

But in Hawaii at the start of the 20th century, it made sense for a company to have an effective monopoly on providing power. That was the only way a small-but-growing company could afford to build the expensive facilities and infrastructure needed to reach deep into the islands.

“In a small island market, if you’re smart, monopolistic competition is the way you want to go,” said David Heenan, a former CEO of Theo H. Davies and Co., one of Hawaii’s iconic Big Five companies, and the former dean of the University of Hawaii College of Business.

Then — as now — there were big infrastructure demands on remote islands with small populations that pursued development. But there were limited resources to invest in core infrastructure. The result was that a single company often came to dominate, whether it was in freight transportation or electricity.

Robbie Alm — a former HECO executive who is now an unpaid advisor to Gov. David Ige — observed that Hawaii, as a result of its limited population and resources, often can only afford to build infrastructure once. He pointed to Oahu’s highways as one example and the Honolulu rail project as another.

That applied in many ways to the development of the power supply system, he said, including the construction of the islands’ large power plants. It will likely be a factor in how the utility manages the increasing use of renewable energy in the coming decades.

The area around the McCandless building — the tall, dark construction shown here on Bethel Street — has transformed over the decades. (Courtesy of JLB Press)

By 1907, HECO was providing power to 2,500 homes and businesses, and 40,789 electric lights. (Fast forward a century to 2016; HECO now services 302,958 residential and business customers, thousands of electric cars and countless lights just on Oahu.)

But more than 100 years ago, demand threatened to exceed supply. So the company installed its first turbine generator, helping ramp up to 24-hour service for its customers.

Hawaiian Electric, though, was barreling toward big changes.

By that time, John A. McCandless and his brothers, part of a well-known family of ranchers, businessmen and politicians, were running HECO and prices continued to rise.

The power company began offering flat rates, which had risen to $1 for every 16-candle power lamp used before midnight. Night owls, who used electricity later than that, paid an additional 25 cent supplement for each lamp.

To figure out who was using electricity in the wee hours, HECO sent out a man on horseback or in a buggy to monitor customers’ homes late into the night.

Much like today, anger over prices ultimately helped lead to change — and competition.

Even in the early 1900s, Hawaii Gas was a business and political rival of Hawaiian Electric. Gas executives like W. R. Castle blasted HECO for what they insisted was price gouging.

The power company defended itself by citing recent rate cuts and arguing that prices were based on mainland models.

But dissatisfaction paved the way for the creation of another HECO nemesis – the Hawaii Public Utilities Commission, a regulatory body that was envisioned to, among other things, help limit the power company’s natural monopoly, particularly when it came to rate-making.

The commission finally was given life by territorial lawmakers in 1913 and in many ways is still the same regulatory body, charged with considering and approving rate increases.

But in 1913, faced with an uncertain new regulatory environment, key shareholders saw the writing on the wall and decided to cash out.

John McCandless and his brothers sold their majority stake of 2,388 shares in Hawaiian Electric for more than $500,000, which was a fortune at the time, and resigned their positions on the power company’s board of directors.

The influential Cooke and Atherton families took over running the utility. Richard and Clarence Cooke and Frank Atherton slipped into top executive positions. They would be widely credited with bringing long-term stability to HECO’s board. Their involvement also marked the beginning of a significant upgrade of the planning, management, investment and value of the company.

One of the first things they did was ask the new PUC for permission to change HECO’s rate structure in order to bring prices down. The commission agreed and Hawaiian Electric sharply reduced both residential rates and the minimum monthly service fee. Some prices were cut in half.

It some ways, it appeared to be a win-win situation. The new ownership ran the business in a more efficient and strategic way, especially by being responsive to customers’ and regulators’ concerns about high prices — and they were rewarded with larger profits.

But the takeover by the Athertons and the Cookes also gave powerful island families another advantage. Hawaii’s biggest businesses could suddenly call on members of their own families — relatives they often co-invested with — to make decisions that would benefit their mutual business interests.

In her book, “Sovereign Sugar,” Carol MacLennan examined the handful of intermarried families that long dominated Hawaii’s plantation era and their impact on the economy of Hawaii.

Richard Cooke, for instance, was president of Hawaiian Electric, but he was also on the board of C. Brewer & Co., Castle & Cooke, Bank of Hawaii and various trust companies. His interests and their interests were the same — for a very long time.

Cooke was the board secretary for Hawaiian Electric between 1913 and 1920, and HECO’s president from 1920 until 1941. He was replaced by his brother Clarence, who had been secretary and then vice president of the company, according to MacLennan.

HECO’s vice president was Frank Cooke Atherton, who joined the company in 1907 and stayed for 36 years. Related to both families, Atherton was also the vice president of Castle & Cooke, and in later years on the board of Bank of Hawaii, Hawaiian Pineapple Co., International Trust Co. and even the Honolulu Star-Bulletin, among others.

Even after World War II, the family remained closely linked to HECO; J. B. Atherton took a seat on the board that he held into the 1950s, according to MacLennan’s research.

Hawaiian Electric seemed solidly in the arms of Hawaii’s elite families and the powerful institutions that controlled the state on the eve of World War I.