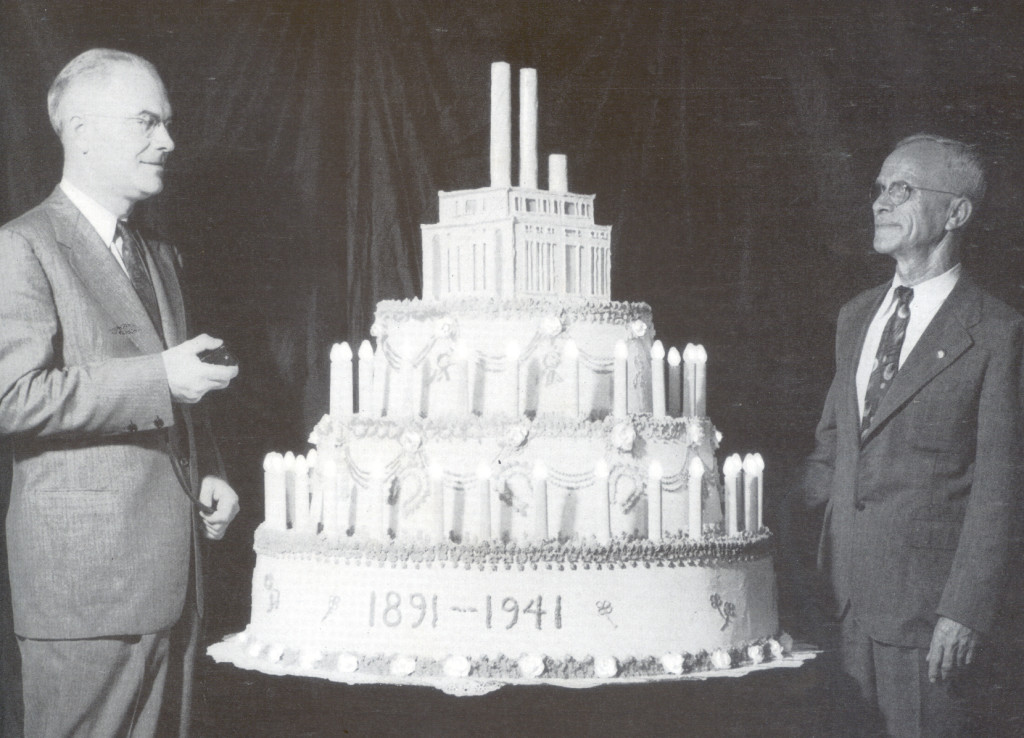 How HECO Helped Pull Hawaii Through The Tough Times

Black Tuesday marked the start of the Great Depression that turned parts of the country into an economic and physical dustbowl. The nation’s money supply constricted and by 1932, 13 million Americans had lost their jobs.

The crash that sent investors and speculators leaping from high-rise buildings reached all the way to the American territory of Hawaii.

With declining demand for sugar and pineapples, many plantation owners concluded they didn’t have money to pay their laborers. There were large-scale job cuts for the first time in decades.

The growing visitor industry suffered an enormous jolt as well with a decline of more than 15 percent annually in 1930 and 1931 and a further fall of 34 percent the following year.

All of the downward trends had a large impact on workers. Hawaii didn’t officially track unemployment numbers when 25 percent of Americans were without work or on jobs programs in 1933. But as late as 1936, after the situation had improved markedly, 12.4 percent of Honolulu’s work force was still in need of a job.

Electricity had become a core component of economic activity by the time the Great Depression kicked in. So the breadth of economic decline quickly became apparent at Hawaiian Electric Co. despite the still-growing population and the ever-broadening array of ways to consume electricity.

Demand for power suddenly lagged in 1930, marking the first time in Hawaiian Electric’s history that it generated fewer kilowatt-hours than the previous year. It was the beginning of uneven times in the islands as the economy sputtered.

A New Deal For Hawaii And The Country

In 1933, President Franklin D. Roosevelt swept into office and pushed through his ambitious public works programs designed to create an enormous number of jobs throughout the country.

Roosevelt’s New Deal, which aimed to lift the country out of an unprecedented crisis, included measures for America’s territories overseas, especially Hawaii, which was already a key national security and defense outpost.

In July 1934, Roosevelt became the first president to visit Hawaii. A crowd of about 60,000 was on hand to greet him when he arrived aboard the USS Houston for a four-day visit that was part of a month-long tour of other U.S. territories. Although he stayed at the Royal Hawaiian, the president got in lots of fishing, including off the Big Island and Molokai, according to historic logs of the cruise and other accounts.

On July 27, 1934, after lunch at Pearl Harbor with the Navy commandant, Roosevelt stopped at Ala Moana Park, another iconic Oahu landmark that took shape under the federal economic recovery plan. He dedicated the east gateway, not coincidentally named the Roosevelt Portal.

“I am very very glad to take part in the dedication of this park,” Roosevelt told the spectators gathered just yards from the beach, “and I know that it will be of great service and a great pleasure to the people of Honolulu for many, many generations to come.”

That evening the president hosted a dinner at the Royal Hawaiian for local dignitaries. The guest list included Territorial Gov. Joseph Poindexter, a number of military commanders and at least two members of the Atherton family, who for decades had been helping to run Hawaiian Electric.

They were likely grateful guests. Roosevelt’s public works programs provided much needed business for HECO and other companies on Oahu. The utility was soon back on the road to growth.

A growing HECO was a sign that the economy was, slowly, starting to stir again.

In 1936, the company — and the battered Hawaii economy — got another boost from a surge in Army and Navy projects as the U.S. eyed Japan’s buildup in Asia.

Average residential electric consumption began to increase again that year, and HECO took to holding events beneath the arches on the ground floor of its Richards Street headquarters where it presented exciting new electric gadgets.

Tourism was also ramping up again as air travel came into its own. While wealthy passengers for years had been able to visit the islands on large luxury cruise ships, 1939 saw the inaugural flight of Boeing’s California Clipper from San Francisco to Honolulu. A 15-hour flight that carried 25 passengers presaged a transformation in the tourism industry from a small business that served the elite to a visitors gateway for the middle class.

But Hawaii’s saving economic grace could be heard most clearly in the drumbeat of war. Japanese military movements in Asia in the 1930s were a prelude to a huge increase in the U.S. military presence in the islands. And the military was becoming an increasingly significant consumer of electricity.

The sharp spike in demand for power in the mid-1930s spurred Hawaiian Electric to build a large and powerful new power plant.

Aware that the Alakea power plant was being overworked, construction began in 1937 on the Waiau Power Plant on the edge of Pearl Harbor.

The site was selected because it had “good foundation conditions, satisfactory water for boiler-feed and condensing purposes, and the possibility of fuel oil ships delivering oil directly into a large storage tank at the proposed power plant.”

A year later, the plant was providing reliable energy to the growing power grid, including to Windward Oahu.

In the late 1930s, the military decided to upgrade and dredge Pearl Harbor. The monthly energy requirements of one contractor doing dredging work exceeded 4 million kilowatt-hours per month, according to a Public Utilities Commission report from the time.

Hawaiian Electric’s importance to the growth and development of Hawaii may never have been more significant.

“The industrial, economic, and social life of these islands has improved to such an extent in the last forty-odd years that reasonably adequate public utility electric service is now obtainable throughout the entire Territory, especially on the Island of Oahu where it reaches practically every inhabited section,” declared the commission’s 1939 Report On The Affairs Of The Hawaiian Electric Co.

By then, HECO was serving 97 percent of the population of Oahu despite the many topographical and logistical challenges. Plant efficiency was increasing, production costs were coming down and rates were falling, the report concluded.

The giant dessert was an impressive piece of work, like a large multi-level wedding cake. But instead of figurines of a happy couple topping it off, its upper layers consisted of a lifelike replica of one of the company’s power plants.

And then the war finally came to the islands.

‘This Plant Is Under Enemy Attack’

“The bullets went through the plant but too high to do any damage to either the machinery or the operating crew,” according to a detailed Hawaiian Electric history of the Waiau plant filed with the Library of Congress.

“The HECO employees on duty at Waiau Power Plant that morning shut down and then restarted the plant three times, as waves of attacking planes flew overhead. The shut downs were undertaken to minimize damage that hits would inflict on pressurized equipment. During lulls, it was assumed the attack was over and the equipment was powered back up to provide power for recovery efforts.”

An account cited in the 1991 book “Hawaii: The Electric Century” highlighted how vulnerable the plant was. “I saw a corporal trying to down the Japanese planes with his revolver,” then-HECO staffer Manuel Lemes said. “This looked very silly, but he was trusting to luck that he would hit a Japanese between the eyes.”

Lemes also explained that on the morning of the attack, after diligently limiting the danger of the attacks to the plant, he wrote in the company log book: “This plant is under enemy attack—Secured everything.”

Thirteen Hawaiian Electric employees, including Lemes, later received an award for valor under adverse circumstances from the Edison Electric Institute in New York.

Despite the scale of the aerial barrage on Pearl Harbor, none of the Japanese bombs struck Waiau. And, somewhat remarkably, there was no significant damage to the 3-year-old power plant, just hundreds of yards away from the shipyard where Navy vessels exploded.

The attack also failed to damage HECO’s economic advancement to any great extent. The subsequent war years of martial law, curfews and strict nighttime blackouts did nothing to slow the company’s growth. In fact, the bombing of Pearl Harbor didn’t just mark the sudden transformation of Honolulu where sandbags, beach barbed wire and trenches became the norm; it marked a transformation in Hawaii’s relationship to electricity.

For one, it brought an even larger scale investment in the territory’s electrical infrastructure. The federal government quickly spent what was then a whopping $300,000 to overcome the striking vulnerability of HECO’s main power plants. The walls of the Waiau plant, for one, were barely an inch thick.

So the government invested in heavy steel and concrete reinforcement to better shelter the island’s power plant infrastructure in case of follow-up attacks.

A round-the-clock war mobilization brought a tremendous need for more electricity. And residential use soared too as the military population skyrocketed from about 28,000 in 1940 to 378,000 in 1944. The overall population of the islands grew to 858,000. Everyone needed homes, food and power.

On the home front, Hawaiian Electric’s Home Services Department was instructing housewives on how to prepare food efficiently given the need to conserve electricity in the name of the war effort.

And in a time when school children were obliged to carry gas masks to school, Hawaiian Electric mobilized, too, completing a 35,000-kilowatt generating unit at Honolulu Harbor that came on line in 1944. And the company ran a pair of new 44,000-volt lines to a substation that served military bases.

During the most active days of the war effort, the company provided more than 1 million kilowatt-hours of electricity every day.

That may seem like small potatoes for Hawaiian Electric today — the company’s operations on Oahu, the Big Island and Maui sold nearly 9 billion kilowatt-hours of energy in 2015 — but in the much less electrified 1940s, that was a remarkable level.

Intriguingly, organized labor, which had successfully unionized on many parts of the mainland during the Great Depression, only started to take root at Hawaiian Electric during the war.

According to “Hawaii: The Electric Century,” the HECO employee and union activist John Hall explained, “In the old days we hardly got paid for overtime. We’d work until about 9 or 10 at night. We often didn’t have any lunch. I believe that if union and management could work together it would be to the benefit of everyone.”

Hall later described the formation of a union inside the company as being among the most significant things he had ever done.

But relations between the company and the union remained strained. Critics complained that HECO was more interested in its stockholders than its customers or its employees, and that rates were, once again, too high.

In 1943 prominent union figures sought radical change. They called on Honolulu Mayor Lester Petrie to take actions that might allow the city to take control of Hawaiian Electric. Public ownership would be better for the people, they said, rates would come down and working conditions would be better.

HECO President Leslie Hicks resisted those efforts, highlighting the company’s success in the face of economic hard times and then war. Hicks insisted that the company was taking a smaller profit than was permitted by regulators.

Those who wanted a power company owned by the people, he said, “exhibit the boldness of pure ignorance.”

In fact, HECO officials would later report that over the course of the war the company’s sales soared sixfold, while its annual income jumped from $5.3 million to $9.3 million.

By the end of the war, Hawaiian Electric and the state’s economy were humming along. But as always, a big transition was looming.

Next: HECO grows stronger than ever as Hawaii figures out life after the deadliest war in history.