The Vatican has exiled Archibishop Anthony Apuron from Guam after concluding a secret trial involving allegations of financial mismanagement and sexual abuse of multiple boys.

A five-person tribunal decided to strip Apuron of his office and prohibit him from living in the U.S. territory.

The Vatican announced the verdict in a press release Friday but did not specify exactly what the longtime church leader was found guilty of. 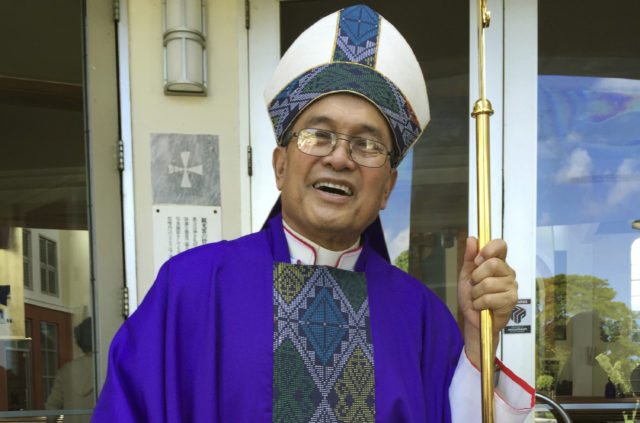 Apuron has served as archbishop of the Archdiocese of Agana on Guam since 1986, and was considered the most powerful man on Guam by many until his suspension in 2016 following public accusations of sexual abuse.

The allegations roiled Guam’s tight-knit, majority-Catholic community and sparked legislation that led to more than 100 sexual abuse lawsuits against the church, as documented in a Civil Beat special report last October, “A Faith Betrayed.”

Apuron is appealing the Vatican’s decision, he said in a statement sent to the news media by his attorney. “God is my witness; I am innocent and I look forward to proving my innocence in the appeals process,” Apuron said.

The Associated Press reported that Apuron’s sentence is much lighter than those given to other high-ranking church officials found guilty of charges related to child sexual abuse.

“It amounts to an early retirement anywhere in the world but Guam,” the AP reported. “Apuron is one of the highest-ranking churchmen to be convicted by a Vatican sex abuse tribunal, and his rank as archbishop may have played a role in his seemingly light sentence.”

‘It Was Just A Matter Of Time’

In January, one of Apuron’s nephews filed a lawsuit saying that the archbishop raped him in the bathroom of the chancery when he was a teenager. 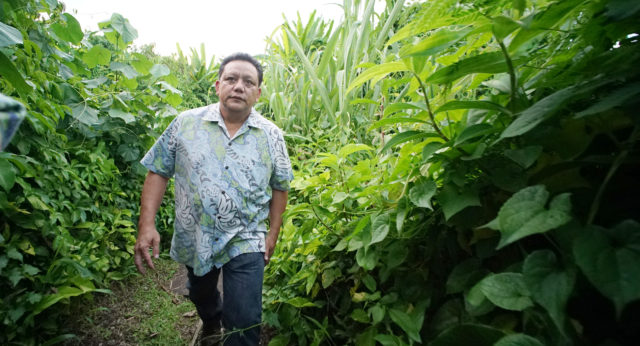 Roland Sondia walks the path between his home and the Agat church last fall.

Reached by phone Friday afternoon — which is Saturday morning on Guam — Sondia said he was relieved by the Vatican verdict but not surprised.

“That’s what we wanted, we wanted our voices heard, we wanted the Vatican to hear us and we wanted them to take action,” Sondia said. “I knew it wasn’t going to be immediate. It was just a matter of time.”

Sondia was speaking from his house in Agat, a village in southern Guam. It’s just a few blocks away from the church and rectory where he says Apuron sexually abused him years ago. It’s the same home that he says he ran to after escaping from Apuron as a teenager.

The last couple of years have been hard, Sondia said. He feels the stares when he goes out in public, and even though many people come up to him and say they support him, it’s uncomfortable to know that everyone knows what happened to him.

Sondia says he’s been trying to keep a low profile and spend time with his family. He’s also been going to counseling, and continues to pray and go to church.

He still gets emotional when he talks about it.

“I don’t know that that will ever stop,” he said.

‘He Is Still Archbishop’

The accusations against Apuron came after years of growing dissatisfaction within Guam’s church.

The island has been a U.S. territory for over a century, but prior to that was a Spanish colony for centuries. The church is ingrained in local culture, and for decades Apuron wielded an outsized level of power and influence.

But Apuron’s power began to crack after his embrace of the Neocatechumenal Way, a branch of the church that works to evangelize lapsed Catholics. Many within the church began to question Apuron’s financial decisions and his support for the Way.

A group of Apuron’s opponents sought out former altar boys like Sondia and persuaded them to go public with their allegations of sex abuse.

Their accusations rocked the church, sparked more allegations and ultimately prompted lawmakers to pass a law allowing people to sue the church for sexual abuse.

Attorney David Lujan represents more than 100 plaintiffs against the Archdiocese of Agana on Guam and says at least 160 lawsuits have been filed in total. He estimates he represents about 112 plaintiffs — there are so many he couldn’t remember the exact number when reached by phone.

Lujan says he expects all of the cases to go into mediation in June and that there’s a status conference scheduled for Tuesday.  The Archdiocese of Agana has said it wants to settle the cases.

Tim Rohr, a member of the Catholic church on Guam who has been a longtime critic of Apuron, is one of the people who helped encourage Sondia and others to confront the archbishop. He said he’s also relieved by the verdict, but warns it’s not over yet.

“The sentence is suspended until the appeal is finalized,” Rohr said. “He is still Archbishop of Agana.”

A Hawaii Doctor’s Journey Toward Embracing Medical Aid In Dying

Tom Yamachika: Why Is OHA Resisting The State Auditor?