VATICAN CITY (AP) — The Vatican has upheld its conviction of Guam’s ousted archbishop for sexually abusing minors, exiled him from the Pacific island and barred him from presenting himself as a bishop.

But it stopped short of defrocking him in a decision that again raised questions about whether the Vatican was truly embracing a “zero tolerance” policy for sex abuse, since it allowed Archbishop Anthony Apuron to remain in the ministry.

The Vatican announced the decision against the 73-year-old Apuron on Thursday, saying a Vatican appeals tribunal had reached the verdict Feb. 9. It cannot be appealed. The announcement ends a chapter that has convulsed the remote U.S. Pacific island territory, after some 200 people came forward accusing Catholic priests of raping and molesting them over decades.

Victims and their advocates denounced the sentence as inadequate, given the accusations against Apuron. The ousted bishop continued to maintain his innocence in a lengthy statement Thursday and declared the decision to exile him from Guam “analogous to a death sentence.” 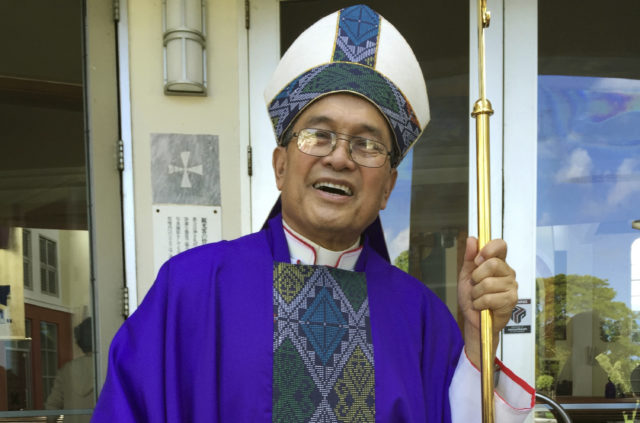 His replacement as archbishop of Agana, Michael Byrnes, hailed the verdict as a necessary closure to a “long and painful period for our church.”

“The victims, survivors and their families who have suffered greatly can have some measure of solace that justice has been rendered in the church’s tribunal process,” Byrnes said.

Despite the Vatican’s judgment, Apuron cannot be criminally charged as the offenses took place as long as 30 to 40 years ago, beyond the statute of limitations.

Pope Francis had named a temporary administrator for Guam in 2016 after Apuron was accused by former altar boys of sexually abusing them when he was a priest. Dozens of cases involving other priests on the island have since come to light, and the archdiocese was facing over $100 million in civil lawsuits when it filed for bankruptcy in January.

In Thursday’s decision, the Vatican confirmed Apuron’s original 2018 conviction and the original sentence, which removed Apuron from office and prohibited him from living on Guam in perpetuity. In an additional penalty, the Vatican said he is prohibited for life from using the insignia of a bishop.

Without an office or the trappings of a bishop, he is essentially demoted to the status of a priest, said canon lawyer the Rev. Davide Cito.

“It seems de facto he is being suspended from episcopal ministry,” said the Rev. Robert Gahl, moral theologian at the Pontifical Holy Cross University.

Victims and their advocates said the absence of a defrocking showed the Vatican wasn’t serious about cracking down on abusers.

“Not removed from clerical state, not removed from ministry. What more do we need to see to know that the pope and his curia intend to reneg on promises of zero tolerance,” tweeted Marie Collins, an Irish survivor who resigned in frustration from Pope Francis’ sex abuse advisory commission in 2017.

“Why is he still a priest?” she asked.

“This is a man who inflicted incalculable harm on the faithful of Guam,” she said in a statement. “He sexually assaulted children and enabled many other priests to rape and molest children too.”

While other clergy who have been convicted of sex abuse have faced punishments as severe as defrocking, not all of them are removed, and the Vatican under Francis has often resorted to lesser penalties that allow the men to remain as priests but under restrictions.

Apuron is a member of the Franciscans’ Capuchin religious order. Many religious orders prefer to keep their convicted priests in the priesthood, so superiors can more closely monitor them and restrict their activity to prevent them from abusing as laymen. It wasn’t clear what, if any restrictions, Apuron’s order had placed on him.

In a statement, Apuron said he was pleased that he remained a priest and archbishop, albeit without insignia. He insisted on his innocence, and as many convicted predator priests have done, said he would offer his suffering to God and to “those who have plotted for my removal.”

“I lose my homeland, my family, my church, my people, even my language, and I remain alone in complete humiliation, old and in failing health,” Apuron said, vowing to be vindicated before God.

The accusations against Apuron also involved grave financial problems in the archdiocese and the purchase of a valuable property by Apuron for a diocesan seminary that he turned over to a controversial Catholic movement.

A lay group that agitated for Apuron’s removal, “Concerned Catholics of Guam,” had pushed for an investigation into the archdiocesan seminary, which Apuron opened in 1999 and moved to an 18-acre (seven-hectare) property thanks to a $2 million anonymous donation.

A Vatican-backed inquiry found the property’s control had effectively been transferred to Neocatechumenal Way administrators without Vatican approval.

Why Is This New Super PAC Spending Big Bucks On Maui Council Races?

Hawaii Is Seeing A Boom In Military-Backed Mortgages

Instead Of Furloughs, Tax Those Who Can Afford It