How Did A Long-Discussed Beach Park Project Sneak Up On Waimanalo? - Honolulu Civil Beat 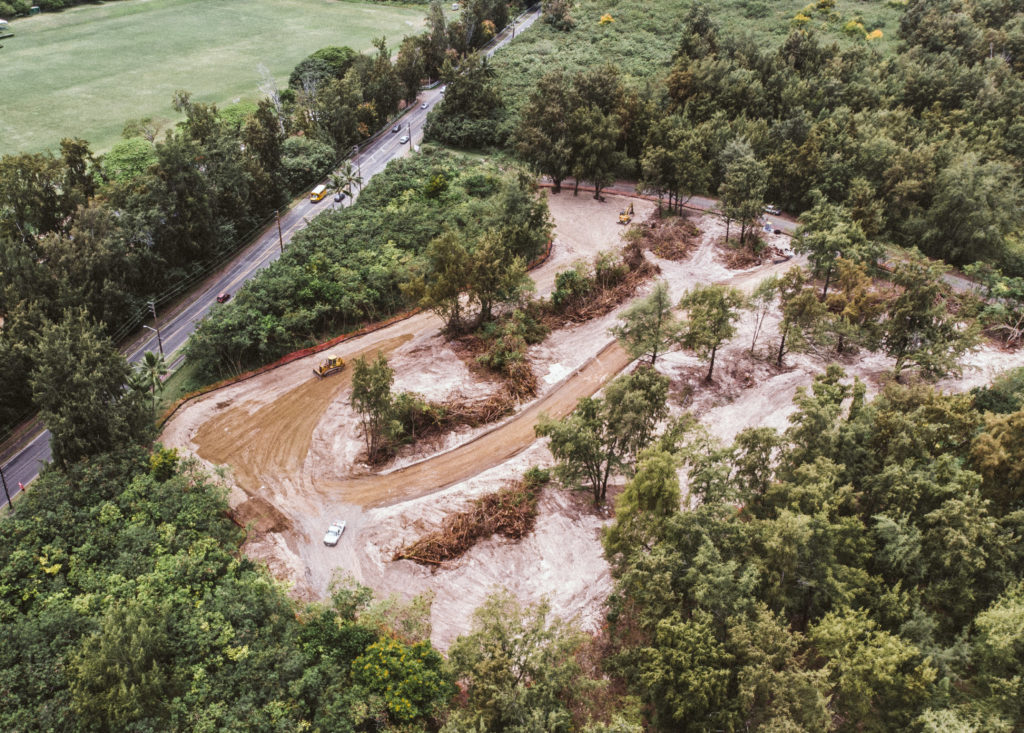 How Did A Long-Discussed Beach Park Project Sneak Up On Waimanalo?

Times have changed since the redevelopment of Sherwood Forest was first discussed. These days, many residents just want to hang onto what they already have.

A major redevelopment of Waimanalo Bay Beach Park has caught residents by surprise, even though it has been talked about for years.

Community outrage has been simmering over the city’s ongoing removal of trees and other foliage from the area better known as Sherwood Forest to build the first phase of a regional ball field complex and parking lot.

At a Waimanalo Neighborhood Board meeting Monday night attended by more than 200 people, speaker after speaker rose to criticize the work now underway at the well-loved park and asked who knew it was going to happen.

Many said they didn’t have a clue until they saw the bulldozers plowing through trees and vegetation at the site.

Waimanalo resident Kapua Harris, who spoke despairingly of the “desecration and devastation going on” at the park, turned to the audience and asked for a show of hands of who knew about the project before construction began.

Only eight to 10 people raised their hands.

The widespread lack of awareness seems odd on the face of it. Park improvement projects are often heralded with public fanfare, signs and coming-soon announcements that allow elected officials to take credit for bringing new amenities to their constituents.

In this case the full project involves a $32 million plan to build a regional sports center, including a Little League diamond, a full-size baseball field, two additional fields that could be used for rugby or soccer and up to 470 parking stalls. Phase 1 includes one ball field, a playground and 11 parking stalls, at a cost of $1.42 million.

The project was discussed at Waimanalo Neighborhood Board meetings in January, February, March and April, but only one resident, Jody Green, raised any concerns.

Several years ago the board began meeting in a large, air-conditioned National Guard facility inside the gates at Bellows Air Force Station, which made the location less accessible for community residents and may have contributed to a lack of awareness of the project.

A review of the paper trail, interviews with participants and statements made at the board meeting shows that a multi-step planning procedure began about a decade ago, although it involved relatively few people.

According to the environmental assessment prepared for the city, employees of the consulting firm PBR Hawaii attended a handful of neighborhood board meetings where the plan was discussed, and held four poorly attended community advisory group meetings in 2010 and 2011 to discuss a wide range of options for the site.

They asked community members for their thoughts, but fewer than 30 people participated, according to the meeting minutes.

And from there, almost everything is in dispute. Memories have grown hazy. People who said they were there and participated in the process don’t always appear in the records of the meetings. Others who were identified as present can barely remember being there.

And some people who supported the project now oppose it.

Public perceptions in Waimanalo have changed in the past decade, according to more than a dozen residents interviewed recently.

Many said they are souring on tourism as visitor numbers climb. They described the growing pressures they feel as the cost of living rises, maintenance of city recreational facilities erodes and traffic gets worse. They are eager to protect what they have, including Sherwood Forest.

Meanwhile, as the years have passed some of the children of ball field advocates have grown up and moved away.

Hawaii is notorious for the slow pace of construction projects, with approvals required from many agencies. In this case, the nine years it took to go from paper-pushing to bulldozing meant that much of the original support for the project evaporated while the city bureaucracy, prodded along by City Councilman Ikaika Anderson, who represents Waimanalo, continued to push it forward.

In the face of popular opposition, Anderson backpedaled last week and asked Mayor Kirk Caldwell to delay the project to protect the habitat of the Hawaiian hoary bat, an endangered species native to the islands. Caldwell refused, insisting that the project needed to proceed for the city to avoid losing money on it.

“Construction is still ongoing for the Phase 1 project,” said Nathan Serota, spokesman for the city Department of Parks and Recreation, in an email. He conceded that outreach could have been better to let the community know the work was about to begin.

“We do try to publicize city projects as much as possible, and there is always room for improvement when it comes to communication,” Serota said.

In an interview last week, Anderson, who was just elected council chairman, played down his role in shepherding the project.

“Yes, I delivered the funding,” but community members drove the process, he said.

“Looking back, the neighborhood board and the planning group arrived at the consensus that the ball fields were necessary,” Anderson said. “That’s the process. I respect it.”

Long-time board members have defended that process.

At the meeting Monday, Mabel Spencer, a board member until 2007, described the early planning as reaching back to Anderson’s council predecessor, Barbara Marshall, who died in 2009. Anderson, then an aide to Marshall, was elected to replace her in a special election later that year.

Spencer said that 15 people were named to a committee to consider improvements at the park and worked together to seek city funding.

“It took a lot of work, a lot of meetings with the city,” Spencer said.

Karin O’Mahony shot this video of the redevelopment work May 14:

Another longtime board member, Andrew Jamila, said he also participated closely in the community decision-making process, though he added he ended up opposing the plan to build the ball fields.

“I went to every meeting … and it was done fairly,” Jamila said. “It wasn’t rushed.”

But while Spencer and Jamila both attended board meetings at the time, they are not listed as attendees at the planning meetings, according to PBR’s minutes, which were printed in the environmental assessment.

Two other officials who have publicly minimized their roles attended at least two of the meetings.

Waimanalo Neighborhood Board Chairman Wilfred Kekoa Ho, who said at Monday’s meeting that the board played only a small role in the project, participated in two of the community meetings.

State Rep. Chris Lee, who represents Kailua and Waimanalo, said he went to the meetings out of personal interest, not in an official capacity. He said he remembered a map and people talking about what could be included in the project, but couldn’t remember much else.

“It was one of several hundred meetings that happen each year,” Lee said. “It was so long ago.”

Evolution Of A Plan

The community’s wish list underwent a notable metamorphosis during the process. At the first planning meeting, participants said they wanted “a park for community events, education and gathering with more camping, picnicking, trails and covered pavilions,” the consultants noted, adding that they were looking to build “connectedness with the land.”

They didn’t hear much about ball fields at that time, according to the minutes.

“From the attendee list, it was noticed that of all the sports organization representatives that were invited, only a few attended the meeting,” according to the minutes.

At the second meeting, conflict was beginning to arise between those who wanted to keep the park as it was, and others who wanted extensive redevelopment.

Bob Loy, who was director of environmental programs at the Outdoor Circle and also president of the Waimanalo Beach Lots Association, began fighting more extensive development at the beach park early in the process, writing letters and contacting officials asking them to proceed with caution. He said this week from North Carolina, where he now lives, that sports field development at Sherwood Forest would be a mistake.

“I believe it will virtually destroy one of the most beautiful and iconic places on all Oahu,” Loy said.

Ball field proponents and sports enthusiasts became more active within the group as time wore on. Sam and Stephanie Pintz, residents of Waimanalo Beach Lots, wrote to the consultants to dispute Loy’s letters and say that they believed that residents in their neighborhood supported ball fields at the site.

“Our impression is that an open hearing would overwhelmingly show that the broader Waimanalo community supports athletic field development as part of a multi-use strategy for Waimanalo Bay Park,” they wrote, appending a list of other Waimanalo residents they said agreed with them, including their neighbors, Geoff and Page Chang.

Ray Takegawa, volunteer regional commissioner of the Kailua/Waimanalo American Youth Soccer Organization, also urged PBR to include ball fields in the project: “If we can get this built, it will be a great addition for everyone!” he said in an email.

Some sports fans still want the ball fields built. At the meeting Monday, three coaches supported the ball fields. Many other speakers, including those whose families are active in sports, said that existing fields in Waimanalo could be renovated and repaired more cheaply than building new fields.

Contacted for comment, Geoff Chang said he had only a slight recollection of a letter that mentioned his name, and that at the time he was a soccer coach with two daughters active in the sport. But he recoiled at being associated with the project now.

“That was before we had the major traffic we have,” he said. “Our feeling now is how can you think of opening new parks when you can’t maintain what you have?”

And his wife Page Chang said in an email Saturday that she never supported the project and had never seen the letter that stated she and her husband were supporters.

Stephanie Pintz said in another email that she and her husband now believe the project should be halted.

Takegawa’s successor at the soccer organization said her group no longer supports the plan.

“Times have changed,” wrote Andrea Farleigh in an email. “At this time, the current board is supportive of fixing the fields we have. The other problem with Waimanalo currently is the traffic. Our families do not want to drive there for training.”

Another participant who has changed her mind is Jody Green, who said she originally became involved with the hope that recycled water would be used to irrigate the fields. At the time she thought adding more park and ball field amenities would reduce the chances the land would be sold off for a resort development.

“That was then, this is now,” she told the audience Monday.