Both Oahu men were over 65 years old and had other health conditions. The first had traveled to Las Vegas in March and had been hospitalized since early April. The other was believed to have caught the virus in the community and was hospitalized more recently, according to the Hawaii COVID-19 Joint Information Center.

“While the death rate from coronavirus in Hawaii is among the lowest in the nation, the tragic passing of these men today emphasizes the need for social distancing, staying home when sick, washing hands and other measures to protect everyone and prevent serious illness, hospitalizations, and deaths,” Gov. David Ige said in a statement. 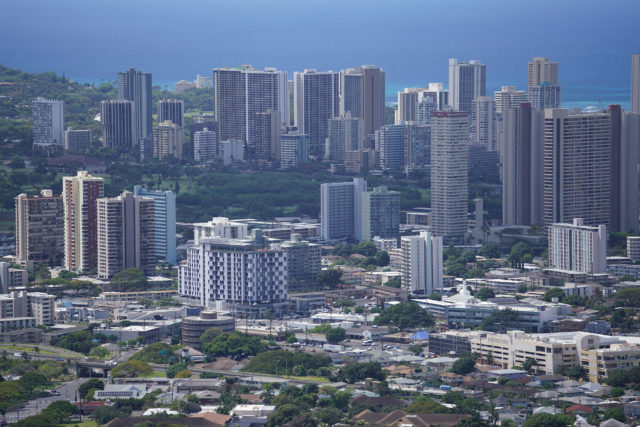 The majority of Hawaii’s COVID-19 cases are concentrated on Oahu.

The total number of cases documented by the Department of Health reached 601 on Friday and included five new cases verified within the past day.

According to the Hawaii COVID-19 Joint Information Center, 27,152 people have been tested for the virus to date. About 138 active cases are currently being monitored by the health department. The rest confirmed to be infected have recovered — eight more people were reported to have recovered on Friday, taking the state’s recovery count to 463 people. People qualify to be released from isolation if at least a week has passed since their symptoms began and at least three days have passed since they had a fever.

Daily case counts fluctuate depending on the diagnostic processing time for specimens collected by clinics and laboratories. Some illnesses that began as many as 10 days ago may have yet to be reported. The median delay time between a patient’s swab sample and the test result report date is three days, according to DOH. The health department receives electronic reports of positive cases and initiates its investigation from there.

The infection count on Oahu rose by three to 392 on Friday. Two more people had recovered as of Friday in Honolulu County. About 85% of Oahu patients, or 339 people, have recovered in Honolulu County to date. The state health department’s hospitalization count for Oahu remained at 53 people for the second day in a row.

On Maui, the infection count rose by one confirmed case to 113. Five new recoveries were reported on Friday for Maui. Approximately 65 Maui patients have recovered enough to be released from isolation to date. A dozen people are currently in the hospital on Maui for COVID-19 related care. 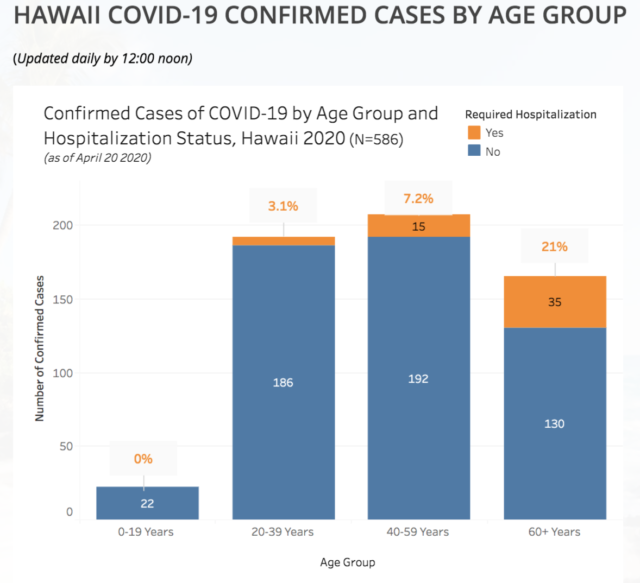 The largest proportion of hospitalizations for COVID-19 have been among people older than 60.

On the Big Island, one more COVID-19 case was announced by the health department, taking its infection count to 69. Hawaii County reported its first hospitalization this week.

Kona Community Hospital officials said Thursday that an adult patient with no travel history was admitted on Wednesday and had tested positive for the virus. The patient is in stable condition and is being cared for in an airborne isolation room, spokeswoman Judy Donovan said.

No one in Hawaii County has died because of the coronavirus, the health department reports. As of Friday, one more person was reported to have recovered, and was counted among the 40 released from recovery on the Big Island. 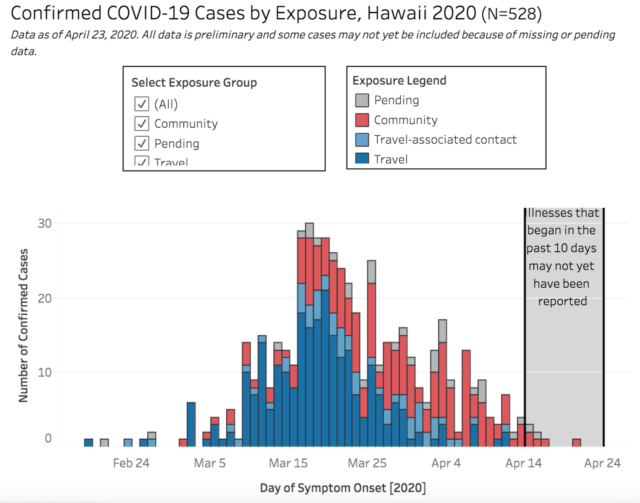 Recent data from the health department show that the proportion of Hawaii’s coronavirus infections caught among the community have increasingly outnumbered those attributed to travel.

Kauai’s COVID-19 case count remains at 21, where it has stayed for nearly two weeks. Nineteen people have reportedly recovered and only one Kauai patient has been hospitalized. No one has died in Kauai County to date.

Six other Hawaii residents have been diagnosed outside of the state.

Why Is This New Super PAC Spending Big Bucks On Maui Council Races?

Hawaii Is Seeing A Boom In Military-Backed Mortgages

Instead Of Furloughs, Tax Those Who Can Afford It