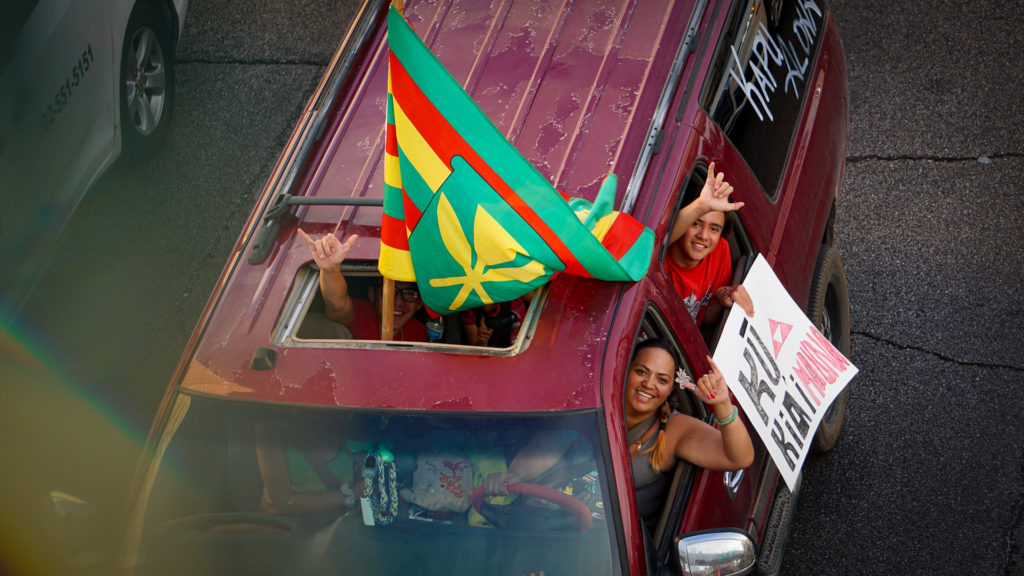 A few months ago we asked Native Hawaiian readers outside of Hawaii to tell us why they left the islands. Here’s what they had to say.

When Aukai Arkus gets homesick for Hawaii — a fairly frequent occurrence in his adopted state of North Carolina — he cooks.

Sometimes Arkus roasts kalua pork in the oven or makes lau lau, but he also makes a lot of foods that are from Hawaii, if not Native Hawaiian. Spam fried rice. Loco mocos. Kimchi fried rice.

While he cooks, Arkus listens to radio shows from Hawaii.

“I actually talk to the radio when they’re talking,” Arkus says. “I talk and I speak in pidgin and it makes me feel like I’m back home a little bit.”

Arkus is one of the nearly 300 Native Hawaiians living outside of Hawaii who have written to Civil Beat or shared their stories with us in the past two months.

Civil Beat put out a call for listener stories in May when we launched a special podcast series about the Hawaiian diaspora.

The series explored stories of Hawaiians who have left in the past — from Hawaiians who fought in the American Civil War to Hawaiians who helped shape American blues and country music. And it took a hard look at why Hawaiians are leaving today. You can read the full series and listen to all six episodes here.

The response has been overwhelming — both the number of people wanting to share their stories, but also the number of listeners who say the series has sparked long-overdue conversations for them about their identity and what it means to be Native Hawaiian at home and abroad.

Many listeners shared stories of hardship.

Arkus left Hawaii in 2015 because he was working three jobs and still couldn’t afford his own apartment. A veteran who struggles with PTSD, Arkus didn’t feel like having roommates was an option.

Joy Enos wrote that being deaf makes it hard to find a good job in Hawaii — compounding challenges with the state’s notoriously high cost of living. She’s found a bigger deaf community in Austin, Texas, but still wants to return and grow old in Hawaii.

Cynthia Driver and her husband sold their home in Waimanalo and moved to Las Vegas in 2016 to retire in a place with a lower cost of living. Her husband died a few months ago, and now she’s longing to come home. She’s on the waitlist for land from the Department of Hawaiian Home Lands.

We also heard stories of hope and creativity. Many listeners have found unique ways of staying connected to the islands.

Kahealani Naki plants lo’i in her yard in Ludowici, Georgia, to teach her children how they are connected to the aina — wherever they are.

When Lono Kollars is having a hard day in California, he takes the advice of an aunt who told him: “You go down to the ocean. You take off your shoes. You go put your feet in the ocean and you can feel home — all the way from California. Why? Because your ancestors went on the ocean and they went everywhere.”

Here are more stories from the diaspora.

Dana Lum left Hawaii in 1998 to build a better life with her husband and three children. They went first to Las Vegas, then moved for work a few times before settling in Arizona.

Vegas was an easy first move. They had family there, and because of how big the Hawaiian community in Las Vegas is, Lum says it felt a lot like Hawaii. Every time they’ve moved, Lum has found a hula halau to join and she still feels very connected to Hawaii.

She had a strong sense of Hawaiian identity before she left the islands. It’s harder, she thinks, for her children — especially her youngest, who was only 9 months old when they left.

Her family has been talking a lot about the Black Lives Matter movement lately and started having more conversations about their ethnicity and race relations both on the mainland and in Hawaii.

Today, Lum writes, her children are showing more of an interest in their history and Hawaiian ancestry. The Offshore stories about Hawaiians leaving the islands centuries ago, have sparked a conversation about the long legacy of travel from the islands and how her family’s story fits into that.

“My daughter said maybe it’s kind of part of who we are as a people,” Lum says. “We’re voyagers.”

Megahn Chun was 15 years old when she moved to Las Vegas in 1999. Her parents were working multiple jobs and they realized all their work would never be enough to thrive.

“The struggle was apparent,” Chun said. “They told us that we’re going to start over, but I don’t even remember moving. Maybe because it was too painful.”

She’s spent most of her life outside Hawaii, moving from Las Vegas to New York and currently Abu Dhabi. She will finally be moving back to Hawaii in a couple of weeks and even though she’s excited, she also has some hesitation.

“I ask myself what are my expectations in moving back,” Chun explained. “There’s this fear of rejection by my people. I don’t want to be othered. I am actually the same.”

She’s also worried for her husband, who is from Mexico.

Their vision is to start a family in Hawaii and learn more about Hawaii’s history and her own genealogy. She signed up for Ancestry.com right after one of our Talk Story sessions online in the hopes of making connections after being away for so long.

“I want to learn these things so that I can help other people and pass it on because that’s how we keep building our community.”

Click on the buttons on the map to see reader submissions from Native Hawaiians who have left the islands.
‘I Belong To Hawaii’

Aukai Arkus was living in a one-bedroom apartment in Palolo when he realized that he had to leave Hawaii.

Arkus was working three jobs, but still had a hard time paying rent. The former Marine was battling alcoholism and struggled with PTSD from deployments to Iraq and Afghanistan, which made it hard to take a roommate. It had been so long since he’d been able to go free diving in the ocean, that he felt like he was drying out – though he lived on an island surrounded by water.

“I couldn’t enjoy getting in the water. I couldn’t go for a sunrise hike. I didn’t have time,” he says. “I stopped playing music … I held my ukulele and if felt foreign, like my fingers lost where they were supposed to go.”

Arkus took a job abroad doing private security. Then made his way to North Carolina to be near family.

Arkus has done well in North Carolina. He met a girl. Worked his way from working security at a club to becoming an executive chef at a local restaurant. Now he’s working to start his own business.

But his life in North Carolina is temporary.

“There is no doubt that I will one day return for good,” Arkus wrote to Civil Beat. “It was where the roots of my family bore the gift of my life. It is where I wish to do the same for my future children. I belong to Hawaii, and to die anywhere else would be to deny the land what it rightfully owns.”

A ‘Citizen Of The World’

Kimo Kippen has decades of working in the hospitality industry under his belt. He is a consultant now, but worked for years as an executive at major resort corporations like Marriott and Hilton.

“I travel 200,000 miles a year for work but I find a strong connection to home through my work,” Kippen says.

His mission, he says, is to become a citizen of the world. Being from Hawaii, surrounded by diverse communities, has allowed him to see the world in an “open and loving way.”

He urges other Hawaiians to stay connected no matter where they are. Once, he even saw someone dancing hula on the beach near his home on the Baltic Sea.

‘I Don’t See Any Opportunity’

Andrew Wong moved to Ohio in 2015 to get a degree at the University of Dayton. He now lives in Utah, working in the financial industry. Moving frequently across the U.S., Wong tries to find Hawaiians or Hawaii locals in every new city.

“Anybody you meet from Hawaii, you instantly know them. You can ask them questions and it’s just easier to be friends.”

Wong doesn’t plan to move back to Hawaii anytime soon, as he says he “always tries to go where the greatest opportunity lies.”

“My mission is to try to get back to Hawaii and change the community, but right now, I don’t see any opportunity based on the cost of living.”

As a young Hawaiian abroad, he is already thinking about his future family and the ways living on the mainland will affect his parents.

“My parents love Hawaii. They still live there and they will never leave. But if I stay here and have kids, will that force them to leave Hawaii to be grandparents? That’s the question that’s looming.”

‘Something To Be Learned’

Dane Ku Blake moved to Minnesota in 2016 to pursue a bachelor’s degree in anthropology. Before he left, he got a kakau uhi – traditional Hawaiian tattoo – to remind him of his family and roots while he traveled abroad.

While he was away, he realized there was a bigger community of Hawaiians in Minnesota than he originally thought. Having unofficial potlucks at friend’s houses, grinding on chicken katsu, allowed him to feel connected to home.

He plans on staying in Minnesota to further his education and said the Offshore podcast revealed diaspora stories to him.

“I’m actually interested in these kinds of stories that you are telling,” Blake said. “There is something to be learned about Hawaiians and other indigenous peoples abroad and their connections to land.”

He says his “grand scheme master plan” is to come home. He knows Hawaii will be here when he’s ready.

Sally-Jo Keala-o-Anuenue Bowman moved to Minnesota in 1958 to study journalism. She knew she wanted to be a writer and journalism wasn’t a major at the University of Hawaii at the time.

Bowman says she met several students from Hawaii who made her feel comfortable, but she was the only Native Hawaiian student there at the time. Most people she met at university couldn’t even place Hawaii on a map, let alone knew what a Native Hawaiian was.

There’s a lot Bowman didn’t know about what it meant to be Native Hawaiian herself. When she attended Kamehameha schools, a classmate asked what her Hawaiian name was, and she was incredibly embarrassed to tell the classmate that her parents had not given her a Hawaiian name. The classmate offered her “Keala-o-Anuenue” as a name.

When Bowman was in her 40s, she started feeling what she has dubbed the “call of ancestral memory.” She wanted to rediscover what it meant to be Hawaiian. And she did it through journalism.

Bowman started pitching articles about Hawaiian topics that she wanted to learn about. She went on to write magazine articles about Native Hawaiian issues for several decades, using that as an opportunity to explore Hawaiian heritage for herself.

“Doing this work connected me to many Hawaiians, and some of them became friends I still have,” she says.