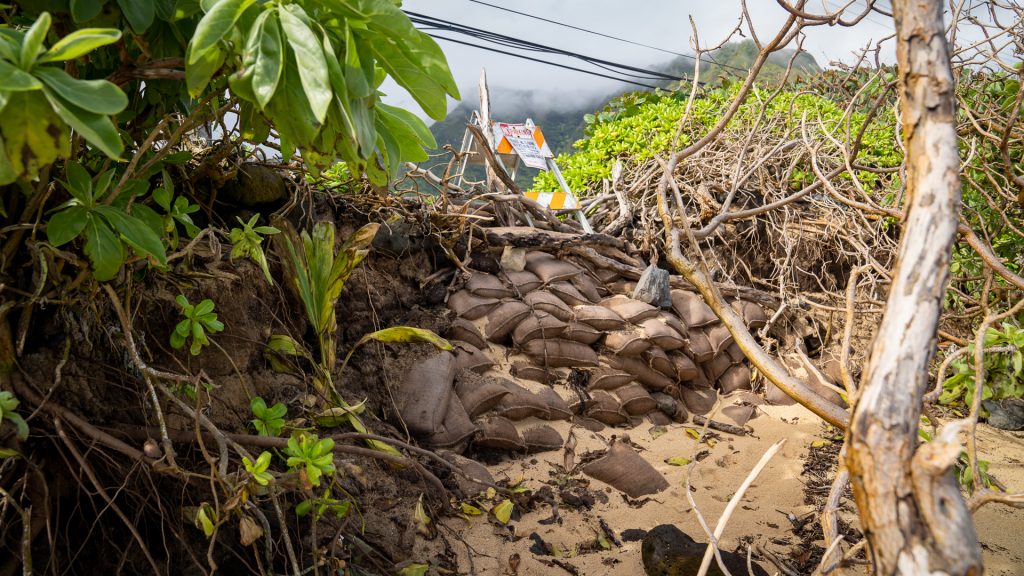 Climate change is threatening iwi kupuna from mauka to makai. Experts say the tools exist to come up with a solution but it will require political will.

Kamuela Kalai and Ian Masterson were sitting on a Kaaawa beach in January when they saw what looked like a little bamboo stick jutting out of the sand. The two were just talking story when they noticed it was actually a bone.

The pair followed the protocol of calling the police, and then the state Division of Conservation and Resources Enforcement, when finding iwi kupuna, or ancestral bones. It took a couple of hours before a state official could check it out. But Kalai knew then that it wouldn’t be the last time she’d have to call.

“We had no idea what was behind it, but we know that if you see one little fragment, there is probably going to be a lot more,” Kalai said.

Just a couple months later, hammering waves exposed a skull. Kalai and a group of friends committed to protecting the iwi kupuna and placed 300 sandbags to hold the shoreline in place and prevent more bones from being unveiled.

“We tried to make a barricade but … the water washed them all away,” Kalai said.

Recent heavy rains and winter’s high surf have cultural preservation experts and community members saying it’s time to consider climate change when protecting iwi kupuna. As more iwi have become uncovered by washed away shorelines and sea level rise, some are calling for more proactive management of these sacred and culturally significant sites.

‘Who Wants To Be Washed Out Of Their Grave?’

Kalai has been an active community member with burial preservation since 2010 after being named a descendant of iwi kupuna found in the discovery of over 700 remains in the basement of Honolulu’s Kawaiahao Church. Almost twelve years later, her family and other descendants are still waiting for word back on a joint burial treatment plan from the church.

She moved to Kaaawa from Honolulu about a year ago and got involved with preservation efforts there after three sets of baby bones were found at a beach minutes away from her home. Kalai asked Masterson, who is a longtime resident and archaeologist from the area, to show her different spots where bones have been found. She wanted to ask them for forgiveness for what’s happening to them.

“Who wants to be washed out of their grave?” Kalai said. “There is no stopping the ocean, but there can be better coastal management.”

In a study led by Haunani Kane in 2012, a University of Hawaii team of scientists looked at northern Oahu shorelines to see which areas were threatened by chronic erosion. Using historic photos to determine shoreline change rates, they found that a number of sites with burials and cultural artifacts were in erosion hazard zones.

They concluded that “managers can use the data provided in this study to rank the vulnerability of threatened cultural features and begin developing protocol to best manage and preserve the assets.”

Chip Fletcher, a leading climate change expert and associate dean at the School of Ocean and Earth Science and Technology at University of Hawaii Manoa, said sea level rise will continue to happen for centuries to come, so making plans to relocate or manage the sites needs to happen sooner rather than later.

“If you identify the locations of these places and overlay our shoreline change modeling, you can project when erosion will threaten individual sites as early as 2030,” he said in a recent interview with Civil Beat.

A 2018 state study found that sea level rise would cost at least $19 billion in flooded land and infrastructure. With a prediction of 3.2 feet of global sea level rise by year 2100, the researchers identified nearly 550 cultural sites across the state that would be flooded.

“It’s not extremely difficult. All the tools already exist,” Fletcher said. “It’s just a matter of putting together the erosion projections with the cultural locations and deciding what the rescue plan is.”

The real challenge has been making that more of a priority for the state.

“Our kupuna could not have known how much our islands would change,” said Kai Markell, a compliance enforcement manager for the Office of Hawaiian Affairs.

Markell has spent over 20 years in burial preservation and used to work for the State Historic Preservation Division back in the 1990s. He knows firsthand that malama iwi kupuna — or taking care of these burials — is strenuous work.

Markell says that to start better management, sites need to be recognized appropriately. Burials revealed by coastal erosion are usually treated as “inadvertent discoveries” as they come up, even though there have been multiple discoveries over the years in the same area.

It’s not just coastal burials. Skye Razon-Olds, who leads preservation and education efforts at Kanaka Climbers, says that discoveries mauka are more common in the last couple of years due to landslides.

“When the weather changes, our environment changes because our basalt is so sensitive,” she said.

As Hawaii experiences more periods of short, heavy rainfall — one of the effects of a changing climate — the high surface runoff increases the likelihood of landslides, scientists say.

Finding iwi kupuna happens often, and back in the ’80s and ’90s, almost daily. Whether by developments’ archeological studies or accidental discoveries by hikers and beachgoers, all findings are first reported to the police to start the process of determining the age of a find.

If remains are found to be 50 years or older, they are handled by SHPD and the burial councils.

Hawaii has five burial councils to help determine permanent placement for previously identified sites. This means keeping the iwi where they are found or moving them somewhere else in the same ahupuaa, or land division. The councils can recommend preservation plans and assist with finding lineal (genealogically proven) or cultural (location proven) descendants.

But the process can also involve multiple state departments and organizations depending on where burials are found. If they are uncovered during road work, the Department of Transportation gets involved. If they’re found on private property, the landowners are included. All of this collaboration means reporting, placement and recognition of the sites can take years.

Kalai spent most of this year urging SHPD to address the Kaaawa erosion, but has not heard back from them about any mitigation plans.

“Iwi are on the lowest rung of the state’s priorities. They don’t have enough people or enough resources to do this, so ultimately the kuleana falls on us,” Kalai said.

SHPD has been under great criticism for decades after a 2002 audit found the department had failed on multiple fronts to protect historic sites and artifacts, from untimely and inconsistent archeological reviews to its inability to ensure the safekeeping of artifacts.

First, call 911 to contact the police. They will have to determine if the remains are under 50 years old or involved in a missing persons or homicide case.

To register a known burial for protection, submit this form.

This step-by-step instruction can help you to file for lineal or cultural descendancy of burials in Hawaii.

SHPD questioned the merit of the audit and said generally that it would need more resources or would have to divert resources from other programming to adhere to the audit’s suggestions.

A DLNR spokesperson said no one was available from SHPD for an interview this week.

“The biggest threat to iwi kupuna is the lack of political will and financial resources to truly care, manage and protect Hawaiian burials pursuant to the law,” Markell said.

In January, burial council leadership laid out numerous grievances with the department, claiming SHPD was not supportive enough of their efforts and criticizing it for not filling vacancies and training council members. Though they are chosen by the governor, several seats on multiple islands have been unfilled for years.

“The same complaints the burial councils have in 2021 are the same ones they had in 1998,” Markell said.

Kamana‘o Mills, chair of the Oahu Island Burial Council, said he hopes that with more information, he and his fellow council members will be better equipped to assist DLNR and SHPD in taking care of burial sites.

The council wants to know what it takes to move a road or reduce eroding sands to make a plan that best serves iwi kupuna.

“We get limited information, but we want to be part of the solution,” Mills said. “It’s beyond iwi kupuna; now it’s a public health and safety issue.”

A Symbol Of Someone’s Humanity

Besides the physical work of investigating sites, studying bones and getting the known areas registered and marked, preservation of iwi kupuna is also spiritual work. Markell was inspired by his kupuna when early in his career, his own moe uhane, or dream, made him realize this wasn’t your typical 9-to-5 job.

“It encompasses your Hawaiian spirituality and identity in one of the most secretive aspects of our culture,” Markell said.

Native Hawaiians believed bones held a person’s mana and where they were buried was often kept secret within families. But with time and the introduction of Christianity in Hawaii, families lost that knowledge.

The location of a burial is also considered sacred because it signifies that person’s connection to the land and the place they lived. Often, those locations are not disclosed to prevent grave robbing or desecration. With respect to iwi found on coastlines, Kalai and the others are on the fence about ocean burials.

“Some people say that if Kanaloa wants to take the iwi, let the ocean take them,” Kalai said. “But if they weren’t buried in the ocean, they should stay in the aina.”

How bones are thought of and the significance of place has changed. Markell believes this is why there is a growing detachment between people and historic sites. Locals feel nostalgic when longtime eateries close, but what about heiau and iwi? What do people value now?

This is the kind of responsibility that people like Markell and Kalai want to see others take on as climate change further threatens ancient burials. In a job that feels like everyone’s kuleana, how do they teach people to care about historic cultural sites? Markell says that people first have to look at bones as a symbol of someone’s humanity.

“Bones represent a human life and you cannot underestimate the value of that human life, no matter who they are and who they mean to somebody else,” Markell said.