Faceless corporations, political action committees and ordinary citizens have poured $2.77 million into the race to represent urban Oahu in Congress for the next two years.

Seven Democrats and two Republicans are vying for the open seat this fall. Combined, they have spent just over $2 million of the total amount raised over the past year.

On Saturday, barring a storm-related postponement of the primary, voters will pick which candidate from each party will advance to the general election on Nov. 4. With early walk-in voting and mail-in absentee ballots underway since mid-July, many have already made their choice. 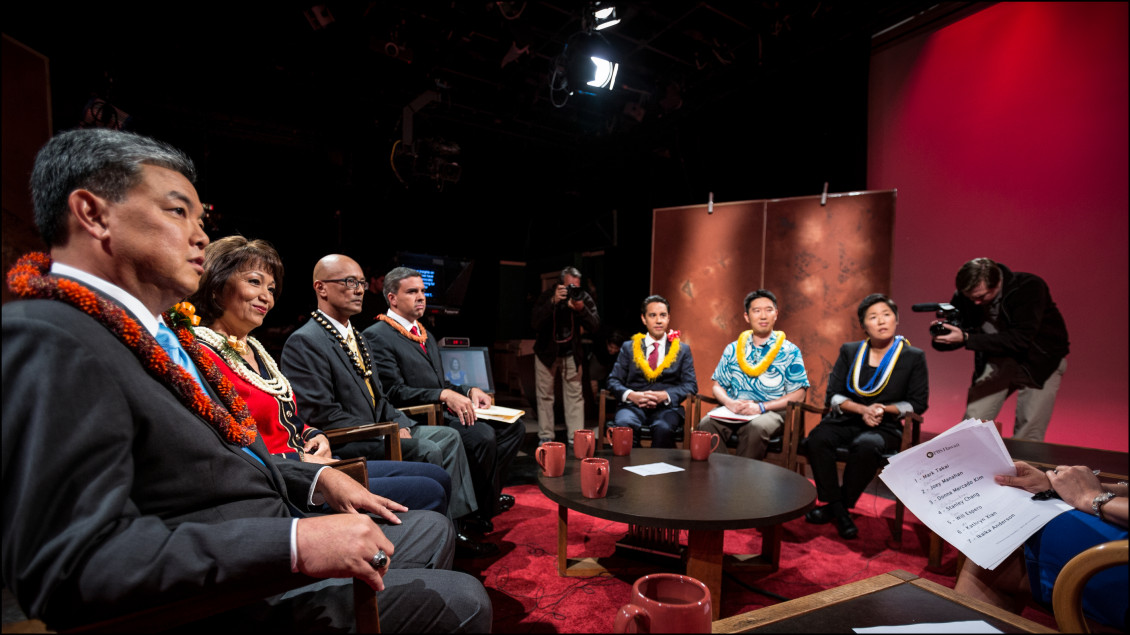 The seven Democratic candidates for the 1st Congressional District get their debate instructions moments before airtime in the PBS Hawaii studio, July 10, 2014.

But that hasn’t stopped the top candidates — Republican Charles Djou and Democrats Mark Takai, Donna Mercado Kim and Stanley Chang — from collecting thousands of dollars in last-minute donations over the past two weeks.

Civil Beat’s most recent poll, conducted late last month, gave Takai a 7 percent lead over Kim, with Chang trailing her by 8 percent. The Republican race was not polled as Djou is expected to easily defeat his primary opponent, Allan Levene.

Takai, a member of the state House, has added $16,100 to his campaign war chest in the last two weeks, according to Federal Elections Commission reports. More than half of that amount came from mainland donors, including $1,000 from Warner Bros. Senior Vice President Howard Welinsky on July 29 and $2,600 from California-based Penisula PAC on July 27.

Kim, the state Senate president, has received $5,600 in late contributions, also mostly from mainland groups. Texas-based Cherrywood Properties President Ralph Gray donated $1,000 on July 28 and, like Takai, she received $2,600 from the Peninsula PAC.

Djou, who had the most cash on hand last reporting period, has raised another $27,300 since July 20.

Former Gov. Linda Lingle, who now lists her profession as a visiting professor in California, gave Djou $2,500 on July 28. Honolulu businessman Richard Pentecost donated $5,200 on July 29. And the Continuing A Majority Party Action Committee, based in Michigan, gave him $1,000.

Candidates canceled some fundraising events in Hawaii that were scheduled later this week in light of Hurricane Iselle, which was forecast to hit the Big Island on Thursday afternoon and then pass over Maui and Oahu as a weaker tropical storm that night and Friday.

Visit the FEC’s website here to see how much money each candidate has raised and spent this election.

Water From Contaminated Red Hill Well Will Be Treated, Discharged Into Halawa Stream

Neal Milner: Enough With The Meddling In UH’s Choice Of A Football Coach