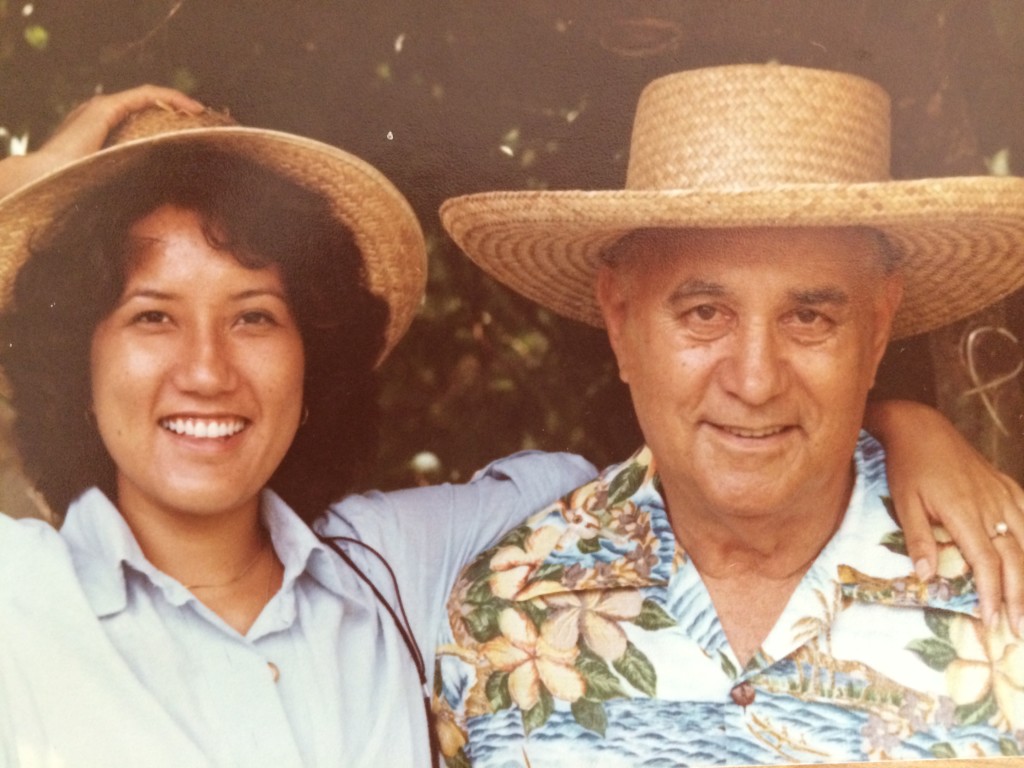 No matter where we are in the world, my husband says my internal clock is permanently set to Hawaii time.

No matter where I am, or for how long, my own rhythms struggle against the prevailing thrum of the place. I’m up too late, or too early, and generally out of sync with the meeting times or mealtimes. In Hawaii, though, I feel naturally in sync with the flow of its sun.

It’s a clock or also, perhaps, a compass.

So maybe it isn’t entirely surprising that, when driving through the Central Valley of California, where my work in water policy often takes me, I find my thoughts returning to a Maui of my father’s time. It is the Maui of my visits during my grade-school years.

In the dry fields beside the endless highways in California, I see the plantation dust that my grandmother’s broom swept daily from the concrete floors of their home in Kahului; I smell the familiar acrid tinge of industrial food production baking into the pounding heat. The farthest recognizable horizon in the Central Valley is agriculture — as it once was for Hawaii.

When I sit in the trailer with the field hands as they take a break from the bend-and-toss of melon harvesting, I see my great-aunties and uncles smeared with the red dirt of the pineapple fields. I didn’t expect to see my late uncle Bill talking story with the paniolos crowding the long picnic tables of the local restaurants in Los Banos, California. And there is keiki-me walking the rickety wooden sidewalks of old mining towns that look like our plantation towns.

I hear the creaking of great-grandma’s rocking chair and smell sweet bread from her wood-burning oven drifting through her upcountry Maui home, wrapping around the sigh of her words:

We don’t get to eat the food we grow and harvest; it all gets shipped away.

The produce in the stores is all wilted and junk.

Our wells are running dry; they are taking our water.

Auwe, this drought seems like it will never end.

Oahu gets all the attention; all we get is their air pollution.

It’s a familiar refrain, whether in the kitchens of Kula, the homes of East Porterville, or the office walls in Fresno. Substitute the Bay Area for Oahu, but the story is the same. It comes from the shared sensibility of people who live in the distant shadows of a big city, their livelihoods tied to servicing the world’s pleasure. The strain of it shows in their cautious and quick appraisal of any stranger: do you really understand us or are you just passing through?

There is more Hawaii in California than California realizes, but that’s the way California is. In the glorious way that Italians adopt the culinary gifts of other cultures, effortlessly make it into their own elegant mash up of a pasta dish, California quickly incorporates the traits of whoever comes here and suddenly – it’s Californian. Surfing. Slippahs. Shaka. A certain kind of struggle on tremulous, shifting ground. We, on the Pacific Rim, are at our own edge, always.

I paddle with an outrigger canoe club. It’s a hardy team that struggles through long drives and dense traffic jams to get to the beach. It is a kind of traffic that people in Hawaii probably wouldn’t bother with. It is Los Angeles’ epic car congestion and this waterfront club is in the decidedly less appealing waters of Marina Del Rey on the edge of a sprawling metropolis.

We often push off in a dense coastal fog on water that is cold and flat. The team is a typical California mix in that everyone is from everywhere: the East Coast, the Middle East, the Far East, and the far north or far-flung south. Only a few of us have Hawaiian blood; but a spirit of Hawaii runs in everyone’s veins.

My father grew up on the Puunene plantation, my mother on the graceful slopes of Manoa. After they met at the University of Hawaii and married, my father joined the Army and off we went to travel the world.

I was born in Honolulu, but my first memories are of Berlin, then Augusta, Georgia. I walked to my fourth-grade school through the snows of Omaha, Nebraska. We were nomadic my whole young life up to the point when in 1965 we walked off the deck of the S.S. Lurline in Honolulu harbor and into the arms of our large extended family.

That was when I discovered what home meant.

First thing, my Maui grandpa made a big luau for us. He dug the pit for the imu in the backyard of his Kahului home, between the clotheslines and beside the strawberry papaya trees. My north star for home is the memory of his strong hands on that shovel.

Grandpa always had his shoulder to the wheel of ohana.

If you were lucky enough to have a grandpa like mine, you would know what I mean by this. He had a deep belief in ohana — the extended circle of family and friends — and he joyfully undertook to build it day by day, memory by memory, tradition by tradition.

Those of us on the mainland get homesick for many things, and the list can be very long. Some of mine: the scent of plumeria warming on your shoulders; the taste of the ocean mist inside the curl of a wave; malasadas from Leonard’s bakery; the true meaning of Aloha; and family.

It all has to do with four key concepts that may be indigenous to Hawaii: Aloha; Pono; Malama; Ohana. If you don’t know them already, Google will help you decipher dictionary meanings, but spending enough time in Hawaii allows for a much deeper understanding.

If geography is destiny, what does it mean to be not only from, but of, Hawaii? It means that no matter where in the world you are, latitude 21 north, longitude 157 west is your magnet — and those four concepts are your compass points.

I use them to guide my way through the Central Valley water woes. It is the worst drought in a century and the tectonic political rifts are on course toward a high magnitude collision.

I can’t think of anything better to use as guideposts than what I learned by being of Hawaii.

How local are you? If you have a story about diversity, race, ethnicity and/or what local identity means to you in the islands, feel free to share it. To do so, click on the red pencil button to share it through Connections, or drop a note to epape@civilbeat.com.