END_OF_DOCUMENT_TOKEN_TO_BE_REPLACED

Hawaii Democrats Work To Flip The US Senate, Retain The House

Tulsi Gabbard Is Refocusing Her Military Career In California

Our DC Delegation At Home: Cooking, Yardwork, Surfing And Politics

Tulsi Gabbard Still Has More Than $500,000 In Presidential Cash

Chad Blair: Voters Deserve To Know What Tulsi Gabbard’s Up To

Another Presidential Primary, Another Last Place Finish For Tulsi Gabbard

Still No Political Love For Tulsi Gabbard On Super Tuesday

Gabbard Continues To Struggle As Nevadans Vote For Sanders

No Aloha For Tulsi Gabbard In Iowa Presidential Caucus

Case Takes His Time To Make A Historic Decision On Impeachment

White Nationalists Try To Claim Aloha Spirit As Their Own

Tulsi Gabbard Won’t Run For Re-Election To US House

Tulsi Gabbard: ‘Blood Of The Kurds’ On Trump’s Hands

Rep. Gabbard Plays Up Military Service But Says Little About It

How Tulsi Gabbard Got Back On The National Debate Stage

Why Is Tulsi Gabbard Paying This Obscure Consultant Big Bucks?

Politicians Weigh In On TMT Protests As Standoff Continues

Gabbard Has Missed Nearly A Quarter Of House Votes This Year

Gabbard Sticks To Her Talking Points In First Presidential Debate

Chad Blair: Today Is Not The Day For Tulsi Gabbard’s Political Memoir

Chad Blair: Why, Tulsi, Why?

Gabbard Greeted In Iowa By Friendly Crowds And Fierce Weather

Tulsi Gabbard On Running For President: ‘We Must Fight For The Soul Of Our Country’

Gabbard’s Claims Of ‘Religious Bigotry’ Draw Cheers From The Right

9 Things To Know About Tulsi Gabbard

Gabbard Apologizes In Video For Past Statements On Gay Rights

Tulsi Gabbard Running For President In 2020

Tulsi Gabbard’s Race To The Top

Tulsi Gabbard For President? ‘I Am Seriously Considering It’

Tulsi Gabbard In Vermont: Protect Our Resources From Those ‘Driven By Greed’

Is This The Beginning Of Tulsi Gabbard’s Bid For President?

Where Does Tulsi Gabbard Fit In The New House Democratic Majority?

Gabbard Spending A Lot Of Campaign Cash, But Not All Of It In Hawaii

Gabbard’s Climate Stance Gets Her Listed As A Presidential Contender

How Tulsi Gabbard’s Fight Against War Is Affecting Hawaii

Tulsi Gabbard Is Writing A Book

How Tulsi Gabbard Is Turning Her National Profile Into Campaign Cash

Tulsi Gabbard’s Record On Gun Control Is A Moving Target

How Tulsi Gabbard Wound Up Blacklisted By Azerbaijan

Pulling Out Of Climate Accord Will Hit Hawaii Hard, Officials Say

Gabbard Focuses On North Korea Amid Questions About Syria

Under Fire In DC, Gabbard Is Still A Hit On The Big Island

Gabbard Skeptical That Syria Was Behind Chemical Attack

Gabbard Met Assad Twice For A Total Of Two Hours

Petition Calls for Gabbard’s Removal From Key US House Posts

Gabbard Crossed The Line With Secret Trip To Syria

Gabbard To Pay Back Costs Of Her Trip To Syria

Tulsi Gabbard Talks With Trump About Syria And Terrorism

Hawaii Hasn’t Been This Short On Congressional Clout In Awhile

Hawaii GOP Chair Denounces His Own Party’s US House Nominee

Gabbard Not Yet Backing Clinton

Gabbard A Leader Of Progressives?

‘Chaos’ In US House Floor Vote

Schatz Has $3M In Campaign Cash

Tulsi, Danny And Bernie In Brooklyn

Hawaii Gets Another Superdelegate For Democratic Convention

Gabbard Promoted to Major at Punchbowl

Pod Squad: What’s Up With Rep. Tulsi Gabbard These Days?

No Political Pedigree: Can Gabbard’s Top Advisor Succeed in D.C.?

Tulsi Gabbard Emails Thoughts on D.C. and Why She Wants 2nd Term

An Open Letter to Tulsi Gabbard

Report Cards for Hawaii’s D.C. Delegates: How’d They Do?

Faith in Politics: Hinduism Pays Off for Hawaii’s Tulsi Gabbard

Going Back To School With Tulsi Gabbard

May I Speak With the Candidate, Please?

Gabbard: Would Be First Female Combat Veteran Elected to Congress

Hannemann and Gabbard Race For The Cash

Could Hawaii’s 2nd District Go From Most Liberal to Most Conservative?

The Story of Mufi Hannemann and Tulsi Gabbard

What You Won’t Learn From Honolulu Council Financial Disclosure Forms

Turbin Ups the Ante In Council Race, Loans Himself 136K In October 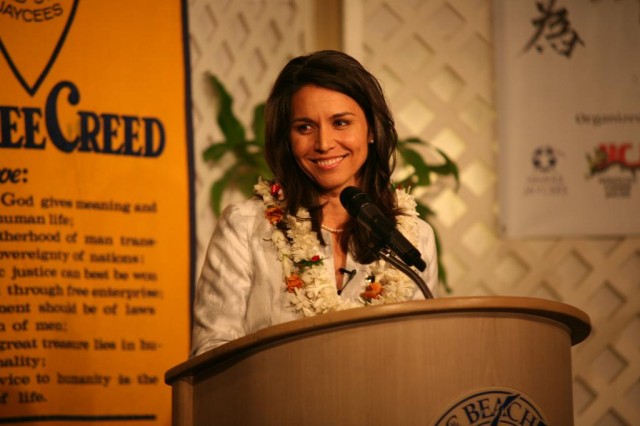