For Four Generations, Teaching Has Been 'The Family Business' - Honolulu Civil Beat 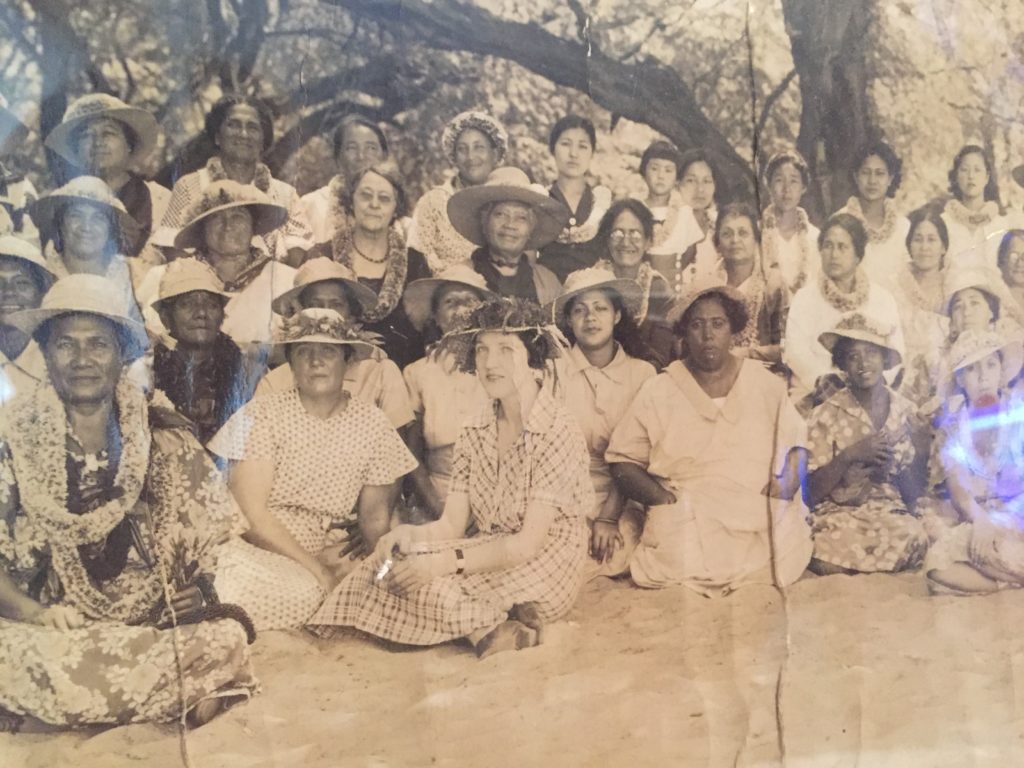 For Four Generations, Teaching Has Been ‘The Family Business’

In 1921, Ethel Day was recruited from Illinois to teach in Honolulu. She would be the first in a line of Hawaii school teachers that spans nearly a century.

It was a move befitting an announcement in the local paper: Ethel Day, “one of Peoria’s brilliant young women,” would be leaving the small Illinois town that was home to teach math at a high school 4,500 miles and an ocean away — in Honolulu.

The travel time alone was remarkable: the 12-day journey would begin with a six-day train ride from Illinois to San Francisco, followed by six days by boat to Hawaii via the S.S. Buckeye State.

“Miss Day expects to be in Honolulu several years,” the article stated. An accompanying portrait in the newspaper reflects the soft features of a newly minted college graduate barely 22 years of age, the woman’s gaze fixed straight into the lens as a small smile dances across her face.

Little did Ethel Day know when she began her voyage from the mainland on Aug. 13, 1921 that she would spend the rest of her life in the islands as a public school teacher.

Now, nearly a century later, Day’s descendants still call Hawaii home — and they’ve followed in her footsteps. Her great-grandsons are both teachers at public schools in Hawaii, the fourth generation of Hawaii teachers in their family.

“The family story was that the Hawaii (Department of Education), much as they do now, was on the mainland recruiting teachers,” said Shane Albritton, a social studies teacher at public charter school The School For Examining Essential Questions of Sustainability, or SEEQS, of Day’s interest in Hawaii in the first place.

“Her classmate in college got all excited about the idea and convinced my great-grandma to do it,” he said. “And then at the last minute, her friend got cold feet and said ‘no, I can’t move that far away.’”

Census reports from 1930 and 1940 reveal where Ethel Day was living in Hawaii and later, her salary as principal of Honokaa School on Big Island. (click to expand).

So Day made the move on her own.

The first-year teacher taught math in Honolulu and met and married her first husband, a mainlander from Alabama, with whom she had a daughter. Day then moved to the Big Island, where she continued to teach, becoming principal of Honokaa School, which was started in 1889 to serve children of the Hamakua coast sugar cane communities and Parker Ranch cattle ranch workers.

A Legacy Made In The Classroom

Albritton, 37, whose mother’s mother’s mother is Day, was born on Oahu and raised on Maui. His path to becoming a public school teacher — his younger brother, Thomas, also teaches English at Prince David Kawananakoa Middle in Honolulu — follows a long line of family tradition, so much so he jokes it’s “the family business.”

His grandmother, Mary Helen King (Day’s only child with her first husband) was also a teacher, as was King’s husband, Garner Hall Ivey, a civil engineer turned executive at Alexander & Baldwin and the former wrestling coach at Maui’s Baldwin High.

So was Shane’s father, Terrence Albritton — a native Californian who once broke the world record in the shot put as a UH Manoa transfer student — and later served as a strength coach and physical education teacher at St. Anthony School of Maui.

Shane Albritton, who was schooled on Maui, eventually graduating from the same St. Anthony High School where his father taught, started his teaching career as a substitute at Baldwin High. The wrestling room there bears a plaque dedicated to Ivey, a beloved figure in the community, whose death in 2012 drew well over 500 people to the funeral.

The day Shane received his Baldwin High T-shirt as a substitute, he made a joke to the office staff about the pangs of betrayal he felt wearing a rival school’s shirt as a St. Anthony High graduate.

“But my grandpa would be happy I’m wearing this shirt, “ he told office staff. “‘Why, who’s your grandpa?’” they asked. When he told them, they exclaimed in shock, “‘What, Coach Ivey is your grandpa?’”

“Before that, I was another sub, coming in and out. After that, they felt more of a connection to me,” he said.

So devoted was his grandpa to Baldwin High, Albritton laughs, his house was painted in its school colors: maroon and baby blue.

Mainland teacher recruits feed a big portion of the public school teacher pipeline in Hawaii. The Hawaii Department of Education has hired slightly more than 1,100 new teachers on average at the start of each new school year during the last five years, according to the most recent employment report.

Nearly one-fifth of all new teachers are not originally Hawaii residents, DOE figures show, and it sets up a kind of teacher churn the state is trying to curb by focusing on retention.

This chart shows average teacher pay in 1940 around the country (click to expand). Ethel Day’s annual salary of $2,400 as principal of a Big Island school was higher than what she would have been making as a teacher in her hometown of Peoria, Ill.

The top reason after retirement for leaving the profession is moving out of Hawaii, including 411 teachers alone at the end of the 2016-17 school year, according to DOE data.

It’s a reality that many young, first-time teachers come to Hawaii only to leave after a few years, due to the high cost of living or wanting to be physically closer to the communities in which they grew up. The DOE has tried to improve teacher retention by investing in long-term substitutes or education assistants with a more permanent attachment to the islands or seeking out retired military personnel to feed the teacher pipeline.

Shane Albritton is ingrained in the local culture because his family dates back several generations here.

“Local haole,” he describes himself, while acknowledging: “It’s kind of an oxymoron when you put those two things together.”

Feeling a connection to place is important as a teacher, some might say. Albritton said his grandmother, Mary Helen King, didn’t have the easiest experience with her students — born in the islands, she attended Punahou as a boarding student and briefly taught public elementary on Maui after teaching at an American school in Guam.

Trisha Roy, a Maui native who teaches digital media at Baldwin High and who met Albritton when they were both teachers there, said she’s known plenty of mainland teachers who are able to strike a connection even if they’re not from here.

“When it comes to teaching, you just got to assimilate and try to understand the culture,” she said. “You just kind of have to be vulnerable in that sense.”

Recently honored as Charter School Teacher of the Year — which is based on the nomination of one’s principal and teacher colleagues — Shane Albritton graduated with a B.A. in English at Stony Brook University in New York and earned his post-baccalaureate certificate in secondary education at UH Manoa in 2016.

His teaching methodology at SEEQS — a public charter school serving grades 6 to 8 housed on the grounds of Kaimuki High School that emphasizes project-based learning — is rooted in the idea of students taking on roles as historical figures they’re learning about to feel more of a connection to the subject matter.

On a recent Thursday morning, inside a large tent that serves as a SEEQS classroom, Albritton led a discussion about Kamehameha I’s effort to conquer the islands in his class, “Playing A Role In Hawaii’s History.”

“How does history remember Kamehameha? Why do we remember him as Kamehameha the Great? What does the word legacy mean?” he asked, tossing a furry “community ball” to students, seated in circular fashion around the room, who raised their hand to respond.

Fanning himself with a small straw fan to keep cool in the early November heat, Albritton occasionally turned to a microphone from a portable karaoke machine to be heard over the noise of delivery trucks from a nearby back parking lot.

“A lot of (history learning) feels arbitrary and unnecessary. There’s no cultural buy-in, but if you are (assigned) that (historical person), you have a real vested interest,” Albritton said later of his class’ role-play structure. “It’s to cultivate cultural empathy.”

He eschews textbooks and assigns his students mainly primary sources to read.

Kids’ faces lit up when asked during a break what they thought about the class.

“You really need a lot of logic, so that helps,” said sixth-grader Kaya Kovach, age 10.

“It’s not a class where you just sit and put your head down,” said her classmate, Eleu Lukey, 12, also a sixth-grader.

Albritton wasn’t a good student by his own admission. In secondary school, his report card would usually reflect all Cs, he said, often accompanied by such comments from teachers as “Shane is very intelligent but he doesn’t do his homework.”

After heading to the U.S. Merchant Marine Academy in New York after high school on a football scholarship, Albritton stayed for one year, returned to Hawaii, worked in hotel security and attended Maui Community College. There he encountered a political science instructor who he says was influential on his later career path.

He’s also worked as a tour guide on Maui and traveled all over, teaching English to adults abroad, including Spain, Brazil and Portugal, where he realized his love of teaching.

When Albritton first entered the Hawaii school system as a substitute, he was asked to teach classes outside his primary subject area, including special education psychology and Health Careers Pathways.

That experience provided a valuable window into effective classrooms: “If kids know you don’t know the topic, they’re not going to buy in as much,” he said. “A lot of teaching has to do with community building.”

After teaching at Baldwin High for three years, Albritton eventually moved to Oahu, and heard about SEEQS, a public charter school founded in 2013, while doing his case studies during his teacher training at UH.

He said living in Hawaii on a teacher’s salary is challenging, noting that his share of rent is close to 50 percent of his monthly take home pay.

In Ethel Day’s era, teacher housing was provided on the Big Island. Her annual income of $2,400 was on the high range compared with other professionals, according to 1940 census data.

Albritton’s own unconventional path to teaching, continuing in the family tradition, has given him a broad perspective on what “success” means for his students.

“What I advocate for them is to really think about what makes them happy and what kind of a fulfilling life looks like, and to pursue that,” he said.

“What success looks like for me in the classroom is based much more on connections they can make and things they can learn and apply to their understanding of the world and real life, rather than doing something for a grade.”