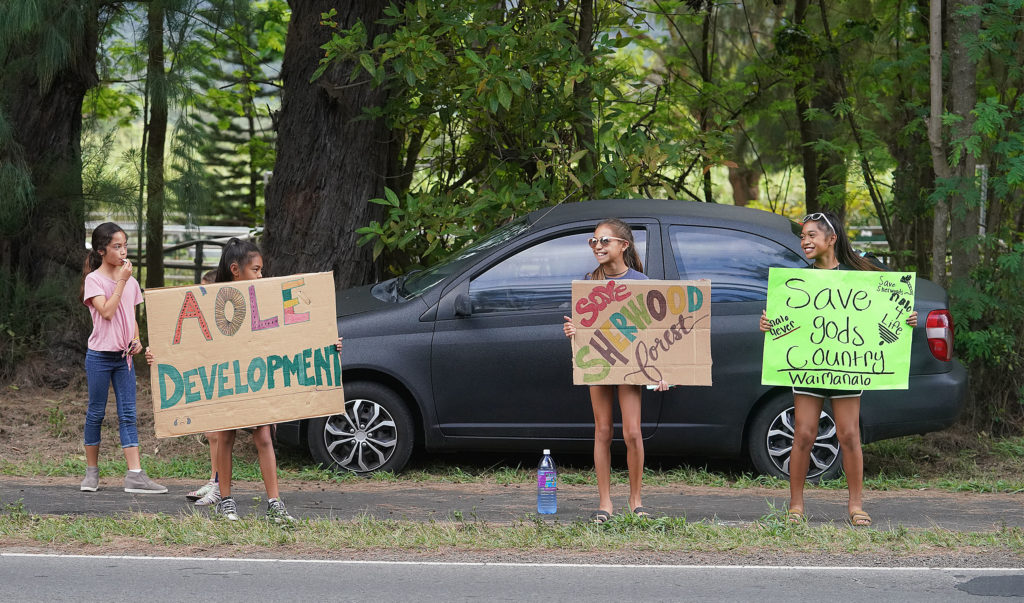 Honolulu’s $32 million plan to clear out part of Waimanalo Bay Beach Park for new ball fields and parking has run into furious opposition.

A city plan to convert much of Waimanalo Bay Beach Park into a regional sports complex continues to generate opposition, with groups of protesters mobilizing along busy Kalanianaole Highway every day in sign-waving protests, drawing honks of support from passing motorists.

The placards share their raw emotions with messages such as “When Is Enough Enough?” “Save Sherwood Forest,” and “Malama Waimanalo.”

More than 10,000 people have now signed an online petition asking Honolulu Mayor Kirk Caldwell to stop construction at the 75-acre park, located on land near Bellows Air Force Station that is known as Sherwood Forest.

Under consideration for more than a decade, the $32 million project would redevelop a rural, heavily treed, old-fashioned park into a sports center with a Little League diamond, a full-size baseball field, two additional fields that could be used for rugby or soccer and up to 470 parking stalls.

The beach frontage would be unaffected, although the entry to the park would be much different.

Phase 1, now underway, includes one ball field, a playground and 11 parking stalls, at a cost of $1.42 million. The construction work, clearly visible from the highway, began around April 19.

It surprised a number of Waimanalo residents to see bulldozers at the popular recreation site removing trees and bushes and hauling the debris away.

Some of them are outraged.

“There was a fire got lit in the community,” said Kukana Kama-Toth, a fifth-generation resident who serves on the Waimanalo Neighborhood Board.

Opponents said they are not just angry about the clearing of a beloved site but also about the wisdom of spending city money to build a new complex when sports fields and other facilities decay through lack of maintenance and homeless Waimanalo residents live in tents at nearby Waimanalo Beach Park.

“I love Sherwood’s. This is the beach we go to, the meet-up,” said Gracelyn Martin, a young mother who lives in Waimanalo, standing by the road waving a protest sign. “I feel like there is so much more to work on than this.”

Mafatu Krainer, another lifelong Waimanalo resident, pounded out his emotions on a 4-foot Tahitian drum.

“Everybody is getting a little bit fed up,” Krainer said. “It’s one thing after another.”

The residents say they wonder who knew about the project and when.

Kama-Toth said she first heard a bit about the project in 2015 but it seemed like a long shot and she didn’t take much note of it at the time. Now she said she believes that proponents purposely kept it under the radar.

“There was not enough transparency, and a lack of public communication,” Kama-Toth said. “As far as the community being in the know, it just didn’t happen.”

Councilman Anderson Was A Prime Supporter

City Councilman Ikaika Anderson, who lives in Waimanalo, was the project’s proponent, according to Andrew Pereira, a spokesman for Mayor Kirk Caldwell.

At first Anderson was proud to proclaim his sponsorship, taking credit for a project he told KHON TV that he had worked on since 2007.

“This project is important because it provides our keiki with much-needed ball field space for organizational as well as recreational sports,” he told KHON.

This week Anderson did not respond to requests for comment. In a letter to Caldwell released Friday, Anderson asked for the project to be halted because the infrastructure work had caused “misperceptions” about the effect on wildlife and the endangered Hawaiian hoary bat, the opeapea.

In a statement issued within a half-hour of the release of Anderson’s letter, Caldwell announced he would not stop the work because it would cost the city $300,000 if it canceled the contract.

At a meeting Wednesday, Anderson is expected to be named chairman of the City Council. Opponents say they plan to attend the meeting to protest Anderson’s actions.

“We will take our plight to Honolulu Hale when Ikaika becomes chair,” said Kalani Kalima, a lifelong Waimanalo resident and one of the leaders of the opposition.

A review of the environmental assessment for the project suggests there was more public participation in the process than some people now recall. The project was discussed at Waimanalo board meetings in 2010 and 2011 and three community meetings.

Nevertheless, as the years passed fewer people were around who remembered much about the project.

‘I Don’t Know How It Went South’

Wilson Kekoa Ho, chairman of the Waimanalo Neighborhood Board, who picked the 15 community representatives who participated in the project planning, sounded stunned by the backlash during a brief telephone interview Monday.

“I don’t feel comfortable talking about it,” he said. “We worked on it for almost 10 years. We made a lot of progress on the work. I don’t know how it went south.”

Jody Green, a long-time Waimanalo resident, had participated in some of the planning meetings for the park in 2010 and 2011, but said she was shocked last month when she learned from homeless people living at Waimanalo Bay Beach Park that they were told they needed to move because the construction equipment was on its way.

“Kailua is done, Lanikai is done, the last little bit is us,” she recalled thinking to herself.

Trying to figure out a way to get the word out to as many people as possible, she went to the annual concert April 20 at Waimanalo Beach Park that celebrates the life of local musician Gabby Pahinui, a Waimanalo resident who died in 1980, and asked to make a public announcement. That’s when the word began to spread in the Hawaiian community, she said, and people began to mobilize.

Kalima and Kama-Toth collaborated in organizing a community meeting at the Waimanalo public library April 26. Anderson was asked to attend and though he was pressed to back down on the project, he stood up for it.

“He made it very clear he wouldn’t halt anything — he supported it,” Kama-Toth said.

She said that the fight in Waimanalo over the Sherwood ball fields reflects frustration not just with that project but also with the city’s failure to take care of the things it is responsible for maintaining.

When the ceiling of the gymnasium at Waimanalo District Park began corroding in 2016, the children in the neighborhood were shut out for two years while the city got around to making repairs. The roof is still in disrepair.

The soil at the community’s existing ball fields is unstable but no one seems to be trying to find a solution, she said, leaving those fields underused.

“All the facilities our community members utilize are going to shit,” said Kama-Toth. “The simple things that other communities have we don’t, but they want to give us a new park, instead of investing money where it is needed the most.”