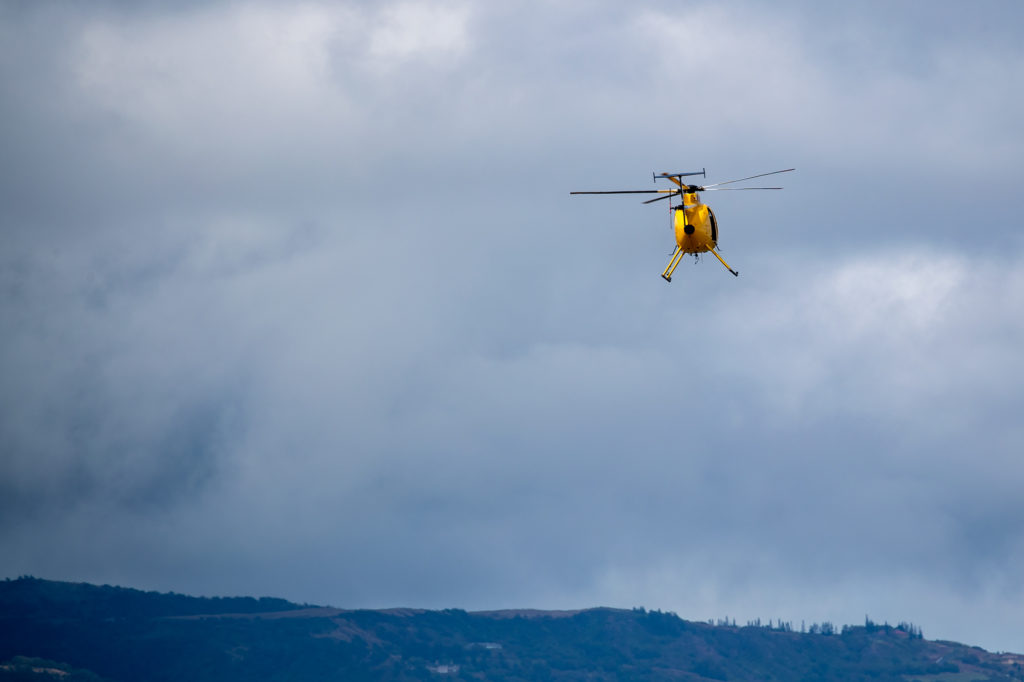 Recommendations for Hawaii have been stalled by the bureaucratic tug of war for decades. Yet crashes continue.

In 2004, a tour helicopter operated by Bali Hai Helicopters flew straight into a cliff near Kalaheo, Kauai, where the weather can change on a dime. All five people aboard perished.

Much like the most recent fatal tour crash on Kauai in December, the pilot of that Bell 206 JetRanger chopper was on his last flight of the day. He had logged nearly eight hours in the cockpit with hardly any rest.

After investigating the Bali Hai crash, the National Transportation Safety Board issued recommendations it hoped would make those tour flights safer. It called for stronger maintenance inspection and pilot training standards — the pilot had been flying over Kauai’s rugged terrain for less than two months. The agency also advocated for stronger rules on pilot breaks.

The Federal Aviation Administration did take some action, but not to an extent the NTSB considered sufficient. To this day, the NTSB considers those FAA responses on the Bali Hai crash “unacceptable actions.”

It’s just one flashpoint in a decades-long tug of war between the two agencies over how best to safeguard the country’s air tours and skydiving flights.

Scenic Hawaii and its more than $100 million air tour industry often lie at the center of the debate.

In fact, the NTSB has spent more than 30 years voicing concerns over what it views as lax and uneven oversight. Those calls have often been rebuffed, however, by the FAA and the general aviation industry, which worries that smaller tour operators will go out of business if the standards grow too rigid.

“When the NTSB does their work … they do not have to consider the financial consequences of what they’re recommending,” said John Goglia, an NTSB board member from 1995 to 2004.

The FAA does have to consider those impacts, however, and “it’s a formidable obstacle to overcome,” he added. “There’s a lot of people who think the FAA should not be considering that.”

The FAA said in a statement that it shares a common goal to promote air safety, but “the agencies sometimes have different views on the most appropriate course of action.”

Those differences have played themselves out after almost every major Hawaii air tour crash like a broken record.

After the Bali Hai crash, the NTSB pointed to one of its previous calls for stronger oversight nearly 10 years earlier, saying this “serves to illustrate the very scenario the Board’s recommendation sought to prevent.”

Now, it’s happening again. In the past year, Hawaii has seen a spate of tour and skydiving crashes that have left 21 people dead. Meanwhile, a recent whistleblower complaint alleges cozy ties between local helicopter companies and FAA regulators.

“The public should be concerned that they haven’t addressed those issues,” Goglia said of the unresolved recommendations from 2007.

“All that needs to be mandated. Every one of those factors we have seen in accidents over and over again.”

Historically, the NTSB has issued 138 recommendations aimed at making air tours safer. It considers the FAA’s response to 29 of those unacceptable, including several that stem from Hawaii crashes.

All tour helicopters flying over water should have inflatable floats so passengers have more time to ditch in a water crash, the NTSB subsequently recommended. In response, the FAA required many, but not all tour helicopters to include those floats. That response remains “unacceptable,” per the NTSB.

Pilots need better training to emphasize it’s OK to turn around when the weather turns sour, Goglia said. “If we were to eliminate all the weather-related risks from these … the accident rate would be considerably different,” he said.

Meanwhile, the board has spent decades urging the FAA to put all helicopter and airplane tours, plus skydiving flights, under the same strict set of standards.

A loophole allows some of those commercial flights to operate under weaker standards of maintenance, training and oversight even if customers aren’t aware of the difference.

“People assume that because the FAA approves it, they have the same level of safety as any other commercial operator. They don’t,” Goglia said.

The NTSB’s calls to fix that date back at least to 1986, after a tour helicopter and tour airplane collided over the Grand Canyon, killing all 25 people on board those aircraft. Eight years later, when two Hawaii helicopters crashed on the same day, the NTSB renewed that call. Three people drowned in one of those crashes, off Kauai’s Na Pali Coast.

Rep. Ed Case, who’s spent much of his return to Congress scrutinizing the air tour industry, looks to close that loophole in his Safe and Quiet Skies Act. But the nation’s general aviation lobby opposes that change.

“We have to ensure that the regulation is in check and it’s being done for the right reasons,” said Melissa McCaffery, western-pacific regional manager for the Aircraft Owners and Pilots Association. “I think in Hawaii over-regulating the air tour industry is not going to solve the problem.”

The advocacy group represents 1,300 members in the Aloha State.

General aviation is “incredibly safe,” McCaffery said, “so I’m just a strong believer that we can’t make blanket statements about each individual accident.” Lawmakers generally lack the technical expertise to dictate how to respond, she added.

Instead, McCaffery proposed enacting reforms through the new Hawaii Air Noise and Safety Task Force, a group formed in January that’s comprised of aviation stakeholders, including the AOPA, plus state legislators and officials.

“I think in Hawaii over-regulating the air tour industry is not going to solve the problem.” Melissa McCaffery, Aircraft Owners and Pilots Association

No community groups are listed as members, but McCaffery said they plan to involve the public in outreach meetings.

The association’s political action committee holds some sway in Washington, D.C. It spent nearly $2 million in lobbying and more than $400,000 in political contributions in 2019, according to the government accountability website OpenSecrets.org.

“We donate to people that we think could help with making aviation better,” McCaffery said.

Goglia, meanwhile, said he doubts that Case’s bill would pass in an election year.

Putting The FAA ‘On Notice’

In Hawaii, 30 air tour companies operate under the more stringent standards — “Code of Federal Regulations Part 135,” according to the FAA. They’re costlier to comply with, but the tour companies that do so get more flexibility in their operations in return.

Another 18 companies, however, are authorized to operate in the islands under what’s known as “Part 91” instead, according to the FAA. They’re the loosest possible set of standards, NTSB officials say. Typically, they’re meant for general aviation flights. Anyone who wants to fly commercially under them needs special permission from the FAA.

“People assume that because the FAA approves it, they have the same level of safety as any other commercial operator. They don’t.” — John Goglia, former National Transportation Safety Board member

Tours operating under Part 135 undergo more frequent, rigorous aircraft maintenance and pilot training, officials say. Part 91, meanwhile, involves less frequent oversight. Under 91, “you very rarely see the FAA visit you,” Goglia said. “They might come over and talk to you, but they’re not going to come knocking on your door.”

All skydiving flights, including the crash at Dillingham Airfield that killed 11 people, follow Part 91.

It’s still not clear what caused that crash in June, moments after takeoff. Still, when NTSB board member Jennifer Homendy arrived in Honolulu in its aftermath, she swiftly called out the FAA for not holding those flights to higher standards.

“There is an inherent risk to parachuting … but paying passengers should be able to count on an airworthy plane, an adequately trained pilot, a safe operator and adequate federal oversight of those operations,” Homendy told media gathered at the Ala Moana Hotel.

“Are we trying to put the FAA on notice on this? Yes,” she said.

In 2008 NTSB issued a lengthy report detailing its concerns over inadequate maintenance, pilot training and federal inspections in skydiving flights.

Since then, there have been at least an additional 81 skydiving flight accidents and 30 deaths recorded across the U.S., including the 11 people who perished in the Beechcraft King Air plane crash at Dillingham.

To be sure, Hawaii air tour crashes have occurred under the stricter standards — not just the weaker ones.

But that tour company, Novictor, had its Part 91 privileges revoked months prior to the crash based on the “company’s accident history and lack of verifiable safety measures,” according to the whistleblower report made public in January. The Kailua crash killed all three people aboard.

The 2004 Bali Hai crash, meanwhile, operated under Part 91. So did a 2016 chopper tour that crashed into Pearl Harbor and killed a 16-year-old boy.

“My knee-jerk (reaction) is, oh yeah, everyone should be 135,” said Calvin Dorn, CEO of Paradise Helicopters. “For me, Part 91 is a little too lax.”

But Dorn also suggested that new operators be allowed to operate under Part 91 for an initial period to get their business going.

“If a new guy wants to start out and he has to wait a year to get a 135 … he’s probably out of business already,” Dorn said recently. “We do want to have some avenue by which they can go through” to succeed.

Ray Smith operates Air Ventures, an airplane tour company on Kauai, under Part 91. The designation prohibits his planes from flying 25 miles past their departure point. They must also take off and land at the same place.

He said he’s got plenty of incentive to maintain his operation to the highest possible standard.

“I never want to have to explain to a family why we had an airplane go down,” Smith said. “I’ve got to make damn sure these airplanes get back. Right now, I can’t think of anything that we do different if we were either one” — Part 91 or 135.

“The FAA doesn’t have the resources to be a policeman. They rely on me to keep my company as good as I can,” Smith said. “They have time to look at their ‘problem children’ and they don’t have time to spend time with the people they’re comfortable with.”

It wouldn’t make sense under Air Ventures’ business to operate under Part 135, Smith added. The move would require spending thousands of dollars on new flight instruments, plus different inspections for every 50 and 100 hours in flight. It would be cost-prohibitive, Smith said.

“I know how expensive maintenance can be,” he said. “If you start pushing the requirements so hard then there would be people not flying when the airship is … reliable.”

Indeed, Goglia said the stricter standards add tens of thousands of dollars in additional costs annually to an air tour company. They would also make those operations safer, he added.

“Is it safe? It probably is safe. Is it as safe as it could be? I doubt it,” said Goglia, who co-hosts a podcast on aviation safety, “Flight Safety Detectives.”