The 'Mauka Shift' Could Solve Rail's Utility Woes. Why Did It Happen So Late? - Honolulu Civil Beat 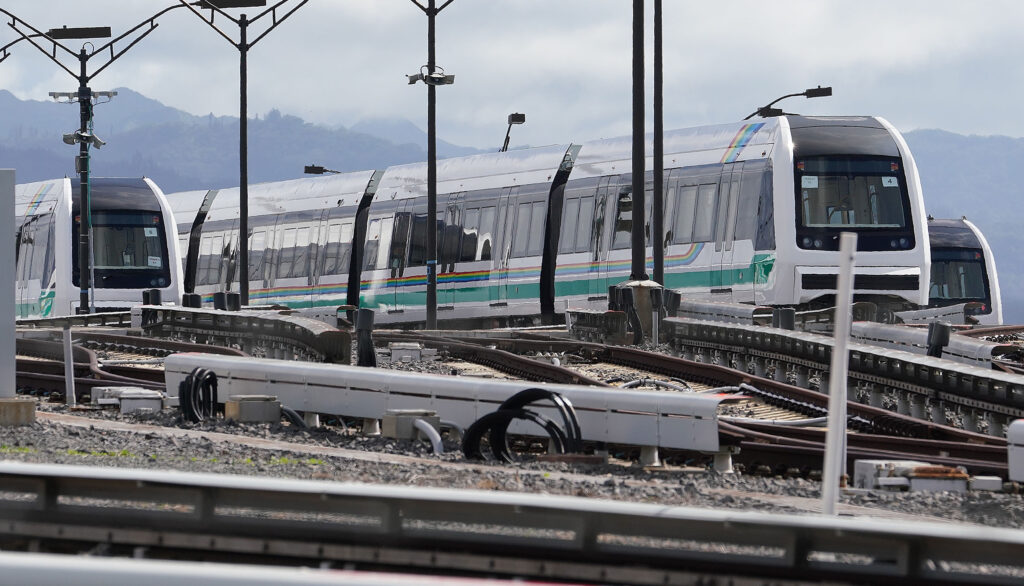 HART’s inability to relocate utilities along Dillingham is central to rail’s latest staggering cost spikes. Now, the agency says it finally has a “good plan.”

Utility relocation along Dillingham Boulevard has vexed rail officials for years. They still haven’t finished the full designs or gotten the proper approvals to do the work, even though it’s been known for decades that the crowded Kalihi corridor would pose huge challenges to any rail line.

The consequences of that failure have been severe.

In fact, the two private teams that competed last year to finish rail each added about half of a billion dollars to their bids to cover the risks and uncertainties surrounding utility relocation, according to the Honolulu Authority for Rapid Transportation. Those high prices helped cancel the procurement, and the cancellation, in turn, threatens to sink Honolulu rail’s last four miles and eight stations altogether.

Regardless, HART is proceeding with a strategy that its new leaders believe will finally solve the Dillingham puzzle.

They call it “the mauka shift,” and it would slightly realign the elevated guideway inland just east of the Kapalama Canal. In doing so, they hope to avoid relocating some of the major high-voltage Hawaiian Electric Co. power lines that hang overhead and some of the lines that run down the center of the road.


The plan is still in the early stages but it’s actually not a new idea. HART looked at the mauka shift two years ago under its previous executive director, Andrew Robbins, who left the project in December when the agency’s board opted not to renew his contract. (“Mauka” is the Hawaiian word for inland or towards the mountains.)

Robbins and his team scrapped the mauka shift in 2019, fearing it might prompt lengthy environmental reviews and cause further delays to a project that at that time was already six years behind schedule.

Now that the schedule has been blown up again — and the full rail line might not be ready to ride until 2031 — the mauka shift is back on the table.

“We are pursuing the mauka shift. This is as far as we’ve gotten,” Lori Kahikina, HART’s interim executive director, said in an interview last week.

The catch is that the city would need to acquire more property on the mauka side of Dillingham. HART said it’s still determining which parcels it would need, but the agency has said that the University of Hawaii and Kamehameha Schools would be the primary landowners affected.

As the guideway crosses the canal, it would veer from the middle of Dillingham to the mauka side of the road. That shift would leave the edge of the guideway approximately 12 feet away from some of the Honolulu Community College buildings that front Dillingham, according to Kahikina and HART’s chief operating officer, Rick Keene.

“They have a right to be concerned for vibration and noise,” Kahikina said of UH, which runs the campus there. HART recently accompanied UH officials to inspect stations already built on Oahu’s west side, where trains have been running, to get a feel for the impact on HCC.

Similar concerns over rail noise and vibrations along Dillingham prompted a lengthy legal battle between HART and the Blood Bank of Hawaii. So far, UH has “been working closely with us,” Kahikina said. “They’ve been wonderful.”

The university did not respond to a request for comment.

Meanwhile, Kamehameha Schools said in an emailed statement that “we continue to work with HART on its evaluation of a proposed mauka shift and its potential impact on our properties and surrounding community.”

It’s not clear why the city and its consultants failed to employ the mauka shift strategy years earlier — especially when they knew how difficult cramming all the utilities under the road would be.

The crowded utility corridor in Kalihi was identified as far back as the late 1980s and early 1990s as a major obstacle to building a rail line into town, according to Robbins, who worked on earlier attempts to build a rail system.

WSP did not respond to a request for comment.

“Unfortunately, we can’t speak to the decisions that were made prior to us,” said Kahikina, who became HART’s interim director in January.  “We don’t know what was behind the decision making.”

Nathaniel “Nate” Meddings, HART’s new project director, said right-of-way acquisitions for large transit projects such as rail need to demonstrate as few impacts to the surrounding businesses and community as possible, and that could have played a role in determining the initial, more limited property takings along Dillingham.

Meanwhile, the final design work for the Dillingham utility sputtered and stalled for years before HART landed on the mauka shift. The local rail agency has canceled the contract procurement to build the remaining line to Ala Moana three times since 2015, largely thanks to repeated funding shortages. Amid those cancellations, the utility relocation designs being done by international design and engineering firm AECOM advanced but were never fully completed.

By 2018, HART realized that it needed to catch up on the utility work. The agency awarded a $400 million contract to local firm Nan Inc. to relocate the 40 miles or so of utilities that it estimates run along rail’s remaining four miles, including Dillingham.

The contract went out even though the full designs weren’t ready.

Nan initially wasn’t given much to do as HART spent months examining potential ways to cut down on the utility work and save on costs. By 2019 it was clear the agency wasn’t moving fast enough, and that it would need to take more traffic space on Dillingham and work almost around the clock to catch up.

Kirk Caldwell, then Honolulu’s mayor, implored HART’s board to “make sure you’re on HART’s ass” to pick up the pace.

The progress finally accelerated in March 2020, when traffic on Dillingham was reduced to two lanes between Middle and Mokauea streets, allowing Nan crews to work faster just as the COVID-19 pandemic hit.

But the progress stalled about a month later when heads of several city departments involved in the utility work expressed misgivings about the designs and HART’s requested variances on clearances between the lines.

Among those department heads was Kahikina, who worked as the city’s Environmental Services Department director.

When HART moved earlier this year under Kahikina to cancel Nan’s contract, the agency estimated less than 8% of the utility work had been done. Nan, meanwhile, had incurred nearly $100 million in costs.

Robbins and his team at HART worried specifically that taking more property along Dillingham for the mauka shift might trigger the need for a supplemental environmental impact statement under federal law. A supplemental EIS could take one year to 18 months to complete, Kahikina said last week.

She and other HART leaders say they’re now optimistic that a supplemental EIS won’t be required, but they’re still waiting for final confirmation from the city’s Corporation Counsel. They are, however, expecting the mauka shift would still trigger a smaller environmental review called a “post record-of-decision.”

Kahikina said she wasn’t sure how long it would take to get that. Still, she was confident that HART would have the time, now that rail’s schedule has been pushed back as many as five years, to 2031, and its total estimated budget has risen to $12.4 billion.

“It’s a really good idea,” Kahikina told the City Council at a recent hearing, making brief comments about the mauka shift. “We vetted it. It’s going to work. I’d like to stay the course.”