Houseless Not Homeless: It's All About The Choices You Make - Honolulu Civil Beat 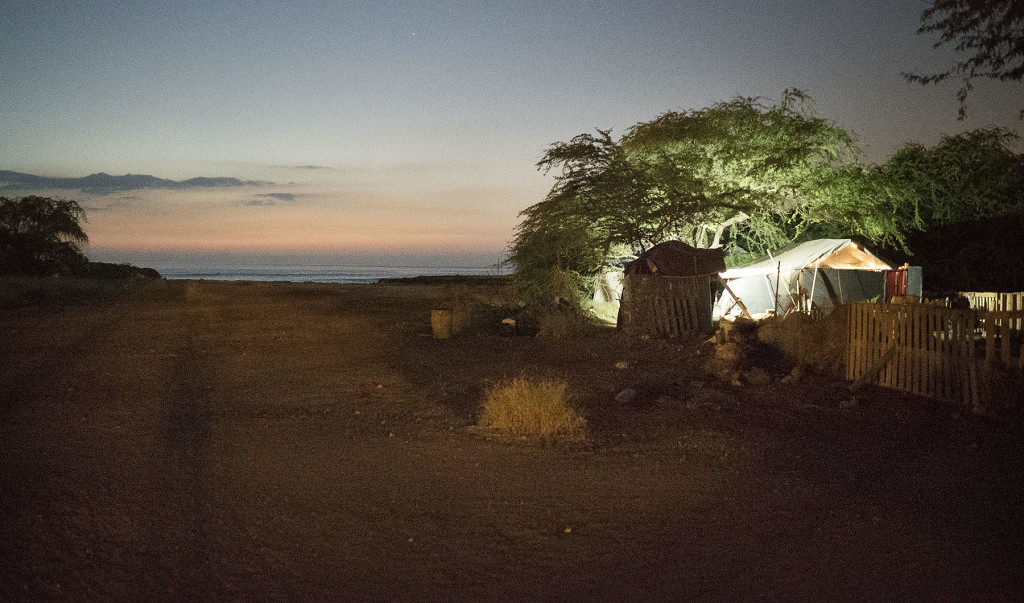 Houseless Not Homeless: It’s All About The Choices You Make

The truth is that people who are so inclined will make a home wherever they live. And some will even build a community.
By Jessica Terrell / November 16, 2015
Scroll to Read
Sunset at The Harbor on the Waianae coast.

It was impossible not to think about my parents the first time I drove to the homeless camp at the Waianae Boat Harbor and watched an old man push a makeshift cart filled with junk across a dusty parking lot.

My parents were largely homeless by choice — raising their children on the road and eking out a living playing music on the streets because they wanted to live a free and adventurous life. As we roamed from one side of North America to the other we lived in cars, vans, tents and a series of ramshackle-looking houseboats fashioned together from material pulled out of dumpsters.

So many things in The Harbor reminded me of scenes from my own childhood: The teenage girl filling water jugs at a faucet by the dumpster, the grungy shirtless men milling about, the stray dogs, the man on the bicycle with his garbage bags of recycling.

On that first visit, I felt frightened walking down the little path behind the tennis courts. The path was lined with tall grass and underbrush, and it seemed as though anything or anyone could be hiding there.

It made me think about how vulnerable people are, living out in the open, and how scary it must have been for my mother, at times, to try to keep us safe.

Journalists want to tell great stories, to dig beneath the surface and show things as they really are.

But as someone who was once homeless — or “without a fixed abode,” as my mother preferred to say — my need to get to know The Harbor community was motivated by something far more personal.

I know there is more to being homeless than most people get to witness: The hardships and humiliations. The triumphs. The inner strength and resourcefulness people tap when they need to. The simple pleasures they find joy in.

I know I still carry emotional scars from my experiences. I won’t forget hiding from teenagers throwing rocks at a place that I considered my home, but others just viewed as floating garbage. I recognize the pain and humiliation in these kids who call The Harbor their home, but also the pride with which they defend it when some outsider puts it down.

I also know that I had an abandoned pier in lower Manhattan as my own personal playground for a year — an experience not even the rich families who live in Tribeca today could give to their children.

And I suspect that not many rich kids, even in Hawaii, have homes so close to the water or a connection to the land so raw as do the kids in The Harbor. Surely there must be something they gain from that, too.

The children in The Harbor are not living in an ideal situation, not by any stretch of the imagination. But I suspect that not all their problems would be solved by having a roof over their heads. Their parents would still do drugs and would still ignore them; they would still be angry, start smoking and drinking early, and mess up at school.

I found that what’s different in The Harbor, what makes it unique, is that there is a community of people trying to fill in the gaps for these kids. Not social workers, not teachers, but surrogate aunties and uncles who form a large extended family. It’s a troubled and often dysfunctional family; but it’s a family just the same.

In the past few months, I’ve spent hundreds of hours in The Harbor.

It can be a dirty and scary place at first, when you don’t know people there. Sitting on a filthy couch covered by a stained sheet is horrifying, until you see it as Shina’s couch or Paula’s. Until your discomfort is transformed by your connection to the person.

I sat in people’s makeshift homes because they offered me shelter from the rain. I talked story over jugs of iced coffee that I brought with me each morning, and spent a sleepless night in a tent inside a gutted makeshift shack. I laughed when teens in the camp played pranks on me, and cried as I walked away from a 1-year-old child playing barefoot in the dirt, his arms and legs covered with scabs and bug bites.

And I spent a lot of time thinking about the choices people make,  just as my parents had made choices about what they thought was best for our family.

For some, The Harbor is better than a homeless shelter that would separate mothers from their teenage sons. Others prefer it to being a burden on their families, to leaving behind their dogs, or to trying to quit a drug like meth.

A very few people view The Harbor the way my parents saw the open road: a chance to live a free life without the constraints of bills or a job.

In Waianae, those who feel they have no other choice but to live in The Harbor are among the very worst off in the camp.

The idea that we were choosing to be homeless was a sort of protective cloak that my siblings and I wrapped ourselves in. We weren’t like the homeless people who slept on pieces of cardboard on the sidewalk without shoes, we told ourselves, or the children we met during our adventures whose parents seemed not just homeless but hopeless.

That sense of empowerment was an emotional resource for us, a valuable tool I thought of often, while sitting in a camping chair and talking in the hot afternoon sun with families in The Harbor.

Life in The Harbor is a story about resources.

Food, water, electricity, a place to go to the bathroom — these are some of the most obvious resources that people in The Harbor struggle to hang on to.

But there are other resources, too, perhaps not as apparent but important just the same.

The Harbor is a community surprisingly rich in resources.