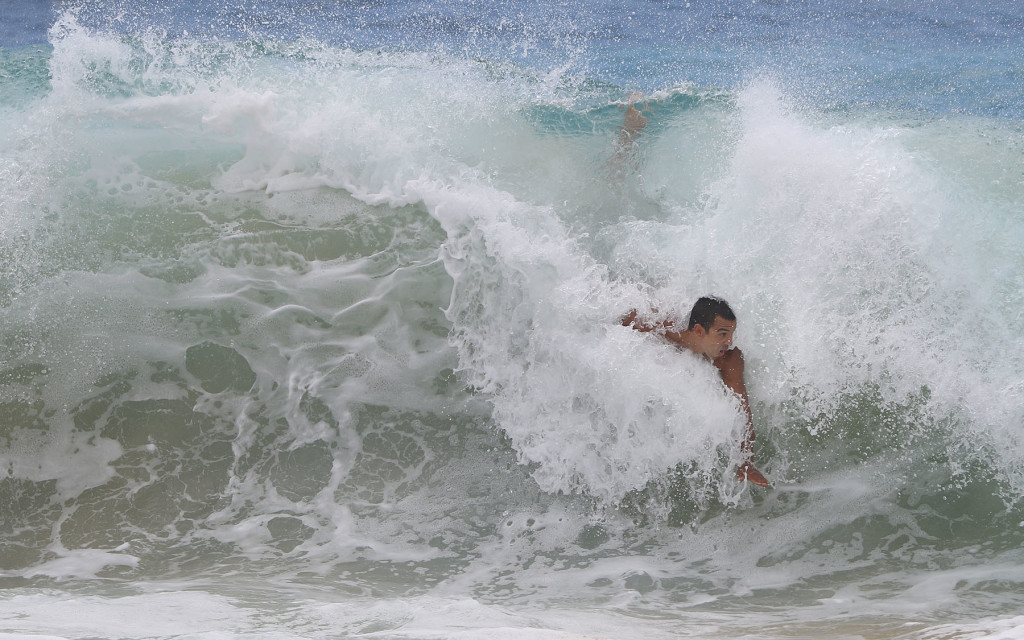 ‘Bigger And Stronger Waves’ Are Perilous For Visitors

In the middle of the Pacific Ocean, Hawaii's unique topography, currents, winds and other conditions often catch tourists off guard.
By Nathan Eagle

/ January 11, 2016
Scroll to Read
A body surfer is enveloped by the crashing shore break at Sandy Beach on Oahu. Photo by Cory Lum/Civil Beat

Sitting on a beach. Watching the waves break. Life is good.

The view in Hawaii might not be all that different from other beaches around the world, but Hawaii waters are distinct — something that may not be evident until you enter them.

The way the surf pounds and rip currents pull can be deceiving, experts say. Visitors who are unfamiliar with Hawaii’s unique ocean conditions take risks without even realizing it.

Chip Fletcher, associate dean at the University of Hawaii’s School of Ocean and Earth Science and Technology, says there are “too many” tragic stories of tourists dying in Hawaii.

These websites contain important information that can keep you safe.

• Hawaii Beach Safety: Updates every 15 minutes with ocean conditions at beaches around the state, current surf and wind reports and the latest hazards and warnings.

• Kauai Explorer: Good information about beaches and trails on the Garden Isle including safety tips.

• Hawaii Department of Land and Natural Resources: Safety advice based on the activity, from snorkeling to body surfing, plus information about staying safe in the outdoors while hiking.

• Visitor Aloha Society of Hawaii: Helps visitors who have suffered a tragedy, including crime victims.

“These families get an image in their head, an attitude in their head that this is a lovely, peaceful and therefore safe setting — so we lure them right down to the water’s edge with this fantasy.”

In Fletcher’s hypothetical yet all-too-real scenario, a family gets up one morning at their hotel in Waikiki and goes to the famous Hanauma Bay on the east side of Oahu. But it’s Tuesday and the snorkeling mecca is closed — or maybe it’s a different day and the parking lot is full.

The next beach heading north around the curving highway is Sandy Beach Park, which Fletcher says is arguably the most dangerous beach in Hawaii.

“The kids are whiny, they just want to get there,” he said. “So they take a quick look. If there happens to be a lull, they don’t look at it again and run right into the water.”

“Various versions of that story happen at beaches everywhere here.”

The Hawaiian archipelago is the most isolated land mass in the world. Unlike California or the eastern coast of the United States, there’s no continental shelf to dissipate wave energy before it reaches the shore, he said.

The water can be 2,000 feet deep less than a quarter-mile offshore in Hawaii.

“This allows for very strong ocean wave energy much closer than you would find on a continent,” Fletcher said.

As an island state, Hawaii also has waves approaching from all directions. The general rule-of-thumb is that the surf is bigger in the winter on the north shores and in the summer on the south shores, but there are exceptions — storms and winds that change conditions.

“So on any one particular beach you can get several different types of waves depending on what time of year it is and what the conditions are,” Fletcher said.

At Sandy’s on Oahu or Hapuna on the Big Island, where there’s little in the way of a shallow reef offshore, waves break directly on the beach.

“It doesn’t take a very large wave to become a potentially fatal situation if it’s breaking right on the beach,” Fletcher said. “And anyone can wander down to the water’s edge.”

When the waves are crashing farther offshore, it takes some skill to reach them.

“There’s a natural filtering process in terms of who’s exposed to the waves that are breaking,” he said. “If waves are breaking right on the beach, like at Sandy’s, it can expose anyone to like a pile-driver effect of picking up the human body and slamming it down on the beach, especially head-first.”

Cary Kayama, who has been working in the field of ocean safety for the past 21 years on Maui and is now the county’s ocean safety supervisor, said the on-shore topography and other conditions set Hawaii apart.

“We’re in the middle of the Pacific Ocean,” he said. “In California, the beaches kind of slope gradually and are wider. You can walk 30 feet out and be in waist-deep water.”

“In Hawaii, it drops off really quickly and that has an effect on the waves,” he said. “They’re bigger and stronger, and there’s a stronger rip current. The topography of the land makes a difference, plus we’re prone to the trade winds and some currents.”

Further complicating non-residents’ understanding of Hawaii’s waters are the lulls between waves, which can range between 30 seconds and 15 minutes.

The swells also affect rip currents, not just shore breaks. Rip currents aren’t unique to Hawaii, but their power can be.

In California, rip currents might not be in the same place each day because they’re often formed by sand bars. They’ll change with low and high tides, making it a challenge to predict where they’ll be ahead of time, Fletcher said.

That type of rip current exists in Hawaii, too, at places like Kailua Beach, he said, but there are also rip currents in the islands flowing through channels in the reef.

These topographically fixed rip currents are easier to locate, but the strength of the water flowing through the rocks can be harder to predict.

“Those can be especially strong, especially if the channel is deep and focused,” Fletcher said, noting as an example the right side of Pipeline on the north shore on Oahu. “It can flow like the Mississippi River and can be impossible to handle other than to just go with the flow.”

His recommendation? Go to beaches with lifeguards, and ask them about where it’s safe to be in the water. Also, check hawaiibeachsafety.com for local conditions.