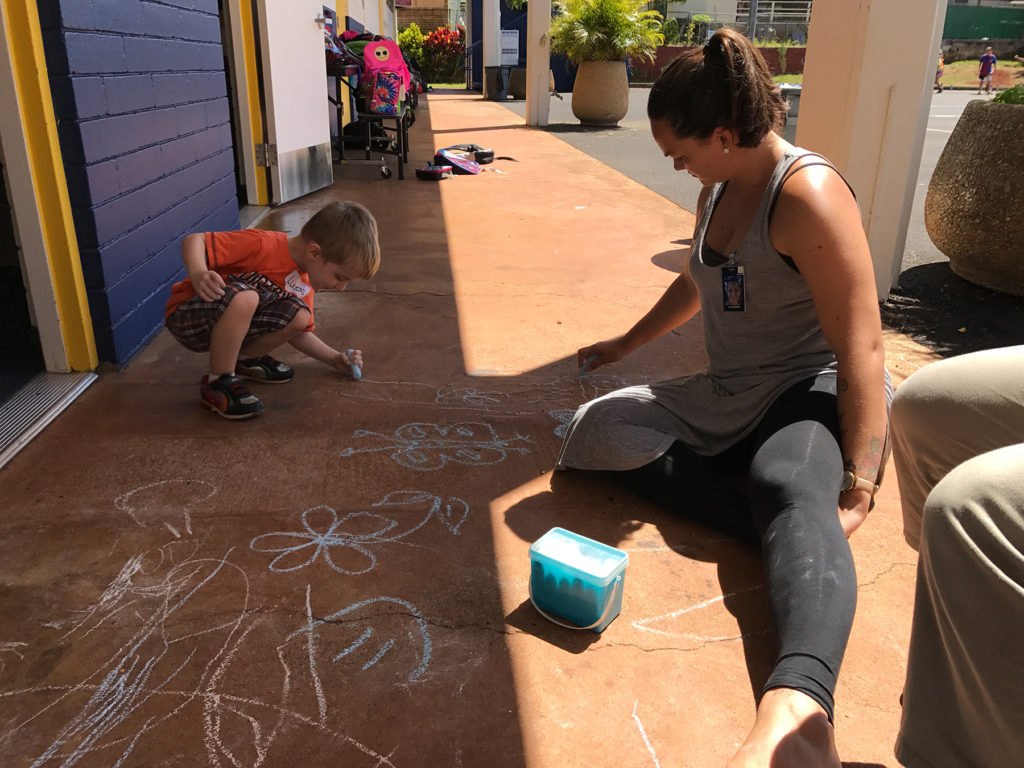 On Campus: We’re Taking A Fresh Look At Education In Hawaii

In August, 14 teachers and 311 students in Wahiawa embarked on an exciting and  challenging adventure: launching a brand new school.

Kamalani Academy, one of two new charter schools approved by the state in 2016, opened its doors Aug. 7. It was a big day for parents, for Civil Beat — and we hope for our readers.

News organizations often spend time covering the outcomes of classroom reform efforts, but it’s rare for reporters to have both the time and the unfettered access they need to follow big education initiatives from the beginning.

That’s what we’re doing this year at Kamalani Academy, through a podcast series we’re calling “On Campus.”

This education podcast is part of an ongoing effort to make audio reporting a bigger part of what we do in the newsroom.

For the last four months, Civil Beat reporters have been spending a lot of time in central Oahu getting to know teachers and parents at Kamalani Academy. They were there when school founders did the final walkthrough of the campus with construction crews, when teachers reported for their first paid day of work, and when parents dropped their kids off for the first time.

Hawaii’s public school system has made some big strides in the last decade, but it still has a pretty poor reputation. The state struggles with high teacher turnover, outdated classroom facilities and meeting the needs of special education students. This year, the publication Edweek gave Hawaii a grade of D+ for educational achievement.

These challenges have created a big demand for alternatives, including private schools and charter schools. That’s what Kuuipo Laumatia, a Native Hawaiian mother of 10, found when she started pitching her idea for a new charter school to local families.

When Laumatia told parents she was going to create a school where learning would be individualized and fun, where kids would learn about Hawaiian culture and teachers would use art and music to teach core subjects like science and math, a lot of parents immediately said, “Where do I sign up?”

Kamalani opened with an enrollment of 311 students. Another 200 children were on a waiting list.

A banner hangs at the Kamalani Academy school site during construction.

Charter schools are public schools. They are funded with taxpayer money, and they have to abide by academic and financial standards set by the state and federal departments of education.

But they also operate with a lot more autonomy than traditional public schools. That freedom is supposed to pay dividends for all taxpayers — not just charter school parents.

Charters, at least in Hawaii, were meant to serve as laboratories for innovation. Places where teachers and administrators can experiment and take risks, create new programs that, if successful, could then be replicated at other public schools to improve the entire system.

It hasn’t always worked out that way. Charter schools in Hawaii often operate in a silo, and have limited support from the Department of Education.

So this year at Civil Beat, we’re going to try and take on a school project in the original spirit of the charter school law. We’re going to spend a lot of time in the education “lab” at Kamalani. See what works and what doesn’t as Kamalani staff try out some pretty bold ideas. And then we’re going to see how those experiments relate to what’s happening in public school classrooms across the state.

Kuuipo Laumatia waves at the crowd at Kamalani Academy’s open house. The mother of 10 is a founder of the new charter school in Wahiawa.

The founders of Kamalani Academy have big plans for their school, and see a need for arts-integration schools with a focus on local culture in other states and countries. Laumatia envisions a Kamalani Academy one day in Nevada, a state with a large community of Native Hawaiians. Perhaps even someday there might be a Kamalani Academy in New Zealand, says Laumatia, who is part-Maori.

Many challenges stand in their way. Hawaii charter schools face a number of hurdles, including a lack of facility funding that many charter school leaders say is crippling. And it’s no easy task developing a robust and safe campus climate with all new teachers and students.

What does it take to build something like this from the ground up?

Civil Beat will be tagging along with Kamalani staff on their journey, posting periodical podcasts throughout the school year. Check our On Campus page for updates.

We will be there to chronicle the school’s succcesses, but we’re also going to examine the struggles they will undoubtedly face in their first year.

We hope you’ll join us.

Listen to the first episode of On Campus below, or download it in on iTunes.