How Do You Make Bike Commuting Work On Oahu? Start At 4:30 a.m. - Honolulu Civil Beat 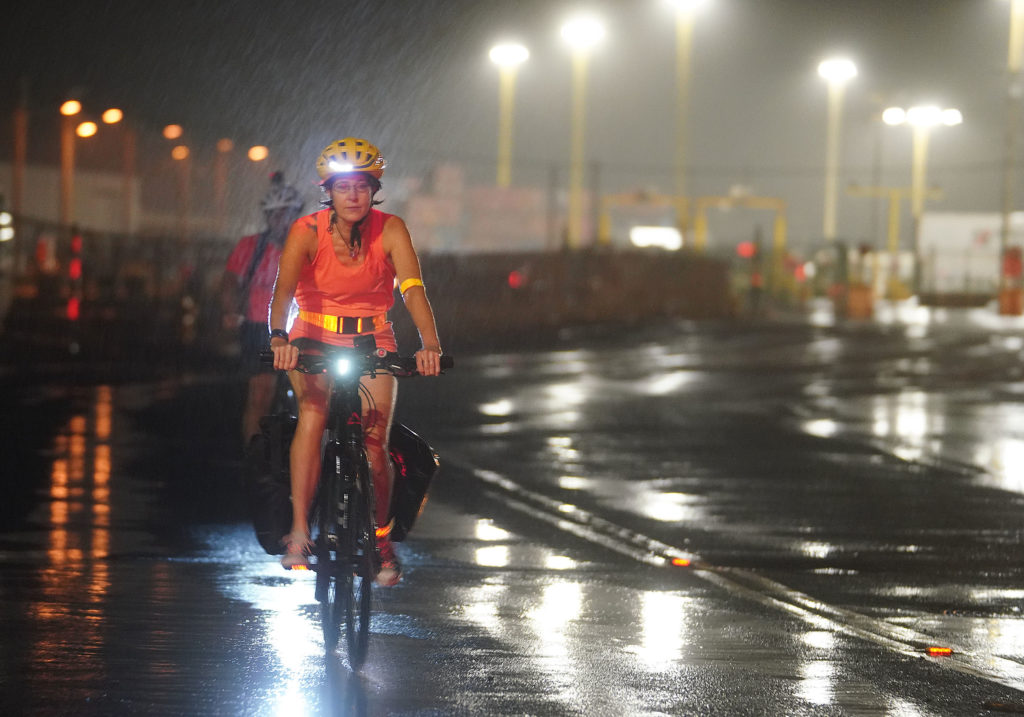 “Honestly, if I can do this anybody can,” longtime local cyclist and cancer survivor Lynn Bailey says of traversing Oahu’s bustling street and highway grid.

At an hour when you hear more roosters crowing than engines revving, Bailey sets out on a 16-mile trek from her home near Punchbowl to her office atop Waimano Home Road in Pearl City.

Before she leaves, there’s a choice: Hybrid or mountain bike?

Bailey’s near daily bicycle commute — a route that zags and winds past imposing highway entrances, over lonely bike paths and up steep neighborhood slopes — is one she’s gradually perfected over about two decades of urban biking on Oahu.

She knows just about every crack, divot, bump and pothole to dodge as she pedals Honolulu’s gritty, worn streets in the predawn darkness.

She makes this bike commute — approximately 90 minutes both ways — about three times a week.

To the average driver it may sound like an insane level of discipline and dedication. But to Bailey and other local bike commuters, it makes total sense. It’s freedom.

“Honestly, if I can do this, anybody can,” Bailey, 49, says after making the commute to her Department of Health office on a recent morning. “You just have to want it.”

When, say, a crane hits a freeway overpass sparking a massive carmageddon, Bailey and her cycling compatriots can still get around the island. When a flat tire or some other mechanical trouble hits, she can usually fix it on the fly and keep going. (If not, she’ll grab the bus.)

The commute keeps her active as she gets older. It gives her more time outdoors. It helps the environment. It cuts down on car expenses  — the gas and repairs, among others.

It even helped get her back to normal, she said, after a yearlong battle against cancer in 2017 that required chemotherapy and radiation.

And for those of us in our cars, that’s one less driver in a metal box to contend with on the H-1 Freeway — or Farrington, or Nimitz or Kamehameha.

Yes, she’s been hit by cars — six times since 2003, when she started bike commuting on Oahu. Each time, she’s been fortunate to walk away with bumps and bruises.

“I’ve learned from every one,” Bailey tells me as we cycle to her office. She quips that every time she got hit she added another light reflector to her rig.

Often, turning cars that didn’t see her despite the precautions she takes to be visible were the culprits. At least one mishap was due to her own impatience, Bailey says. She tried to let a tour trolley pass her on Waialae Avenue but then started pedaling too early. As the road narrowed, the trolley moved over and squeezed Bailey off the road, throwing her from her bike.

Still, her sense is there’s an inordinate level of fear among Oahu’s residents to commute by bike, often by those who’ve never tried it.

“My advice is, if you’re not comfortable with something, well, try something once and if it doesn’t work out try it a different way.”

Gradually, with some trial and error, you might find a bike trip to work as part of your regular routine.

Bailey has been biking this particular route since early 2018, shortly after her DOH offices moved from Kakaako to Pearl City, lengthening her commute by more than 14 miles.

At first she took the bus most of the way, gradually adding more miles on until she was conditioned to do the whole thing.

To start, she coasts down Ward Avenue to Ilalo Street near the John A. Burns School of Medicine.  Then she pedals ewa — first across Ilalo, then Ala Moana Boulevard past downtown; then Nimitz Highway approaching the airport.

Throughout the ride she relies on some of Oahu’s busiest roads. What’s key is that Bailey bikes those roads when there’s hardly any traffic.

“Different roads have a different personality at different times of day — even different days of the week,” she says while en route.

Oahu’s best bike routes are largely a function of the time of day. DOH allows Bailey to adjust her schedule, and she typically starts riding to work around 4:30 a.m. for a safer commute.

The trade-off, of course, is that it happens to still be dark during many of these hours, too. But Bailey stays well-lit during her rides, wearing bright clothes and flashing lights to stay visible to passing cars. Safety trumps the nerdy fashion.

From Nimitz, Bailey zigs and zags to Middle Street. A right on Waiakamilo Road, a quick left onto Kalani Street around the KGMB building, then a right on Puuhale Road, then left onto Dillingham Boulevard.

Dillingham becomes Kamehameha. A few blocks later, at Middle, Bailey is confronted with a daunting set of highway entrances.

When the light turns green, she heads into this maze of highway entrances but at the last second swiftly cuts to the right, onto a bike path hidden off to the side.

It’s the unmarked start of the Nimitz Viaduct bike path, which takes her past the airport and then to the Bougainville bike path.

She’ll bike through the rain or the heat. It’s not the rain that’s the worst, she said, but rather the clouds of gnats that form the day after the storm. On those days she wears a bandana over her face.

From Bougainville Drive, Bailey turns left onto Salt Lake Boulevard and she coasts past Aloha Stadium. At the boulevard’s end she merges onto Kamehameha — which at that point has the definite feel of pedaling on a fast-moving open highway.

As I trailed Bailey last week on my own bike this was the one spot that felt dicey.

After a couple of blocks on the highway she takes the first left turn into a driveway near the Pearl Harbor Bike Path entrance.

From what I can tell, that bend around Aloha Stadium remains one of the key missing links in Oahu’s island-wide bike route.

Years ago, Bailey said, there was a path that moved cyclists more safely and comfortably from the Pearl Harbor visitors area to the Pearl Harbor Bike Path but the Navy erected a fence blocking access.

In any case, she manages to get to the Pearl Harbor Bike Path and pedal to Blaisdell Park. By that point she’s traveled about 13 miles and one hour.

Then, the real fun begins.

The last three-mile leg of Bailey’s commute is a nearly 500-foot climb through residential Pearl City. First she ascends Kaahumanu Street, crossing over the H-1 Freeway. Then, she cuts through Waiau, making her way toward Waimano Home Road as the neighborhood streets gets steeper. She crosses gulches, parks, homes, Momilani Elementary School and Pearl City High School.

Local residents along the way wave to her and she waves back, like they’re neighbors. If she was in a car she’d probably just be another passer-by.

Finally, she arrives at her DOH office and a guard waves her through the gate.

Not many of her co-workers know just how far she bikes; others see her climbing Waimano and think she must live in the neighborhood, she said.

Once at work, Bailey’s able to rinse off in the emergency response office’s decontamination shower. Other colleagues who exercise before work sometimes rinse off there too, she said. She pulls her gear from two panniers bags fixed to the back of her bike. The bags are a recent upgrade, she says. Previously, she would stuff a backpack into a dry bag and bungee it to the bike.

The shower is a huge advantage. It highlights a key impediment to others who might otherwise give bike-commuting a try if they had a convenient place to clean up for work.

She’s not a triathlete. She’s not a fitness guru. Instead, she’s just another resident on Oahu who has managed to incorporate biking into her routine thanks to some patience, persistence and joy.

She passes other cyclists coming from different areas on the island’s roads every day.  In the last five years or so she’s noticed a measurable change in drivers’ attitudes toward bicyclists on the road.

“Even though this is a much longer commute, I have miles and miles of bike paths and bike lanes that help make me feel safer, and keep me out of the way of the traffic so I’m not slowing them down and they’re not getting frustrated.”

“But, it’s also beautiful,” she added.

Lynn Bailey is not Oahu’s typical commuter. Maybe one day, she could be.

We need your help.

We need those of you who value our journalism to support it.

There is no better time to support our nonprofit newsroom.