Denby Fawcett: Sad To Watch The Turmoil At The Star-Advertiser - Honolulu Civil Beat

Denby Fawcett: Sad To Watch The Turmoil At The Star-Advertiser

The Star-Advertiser’s plan to cut 30 newsroom staff may turn out to be a negotiating ploy, but it’s “shocking” news to the journalists who were on the layoff list. 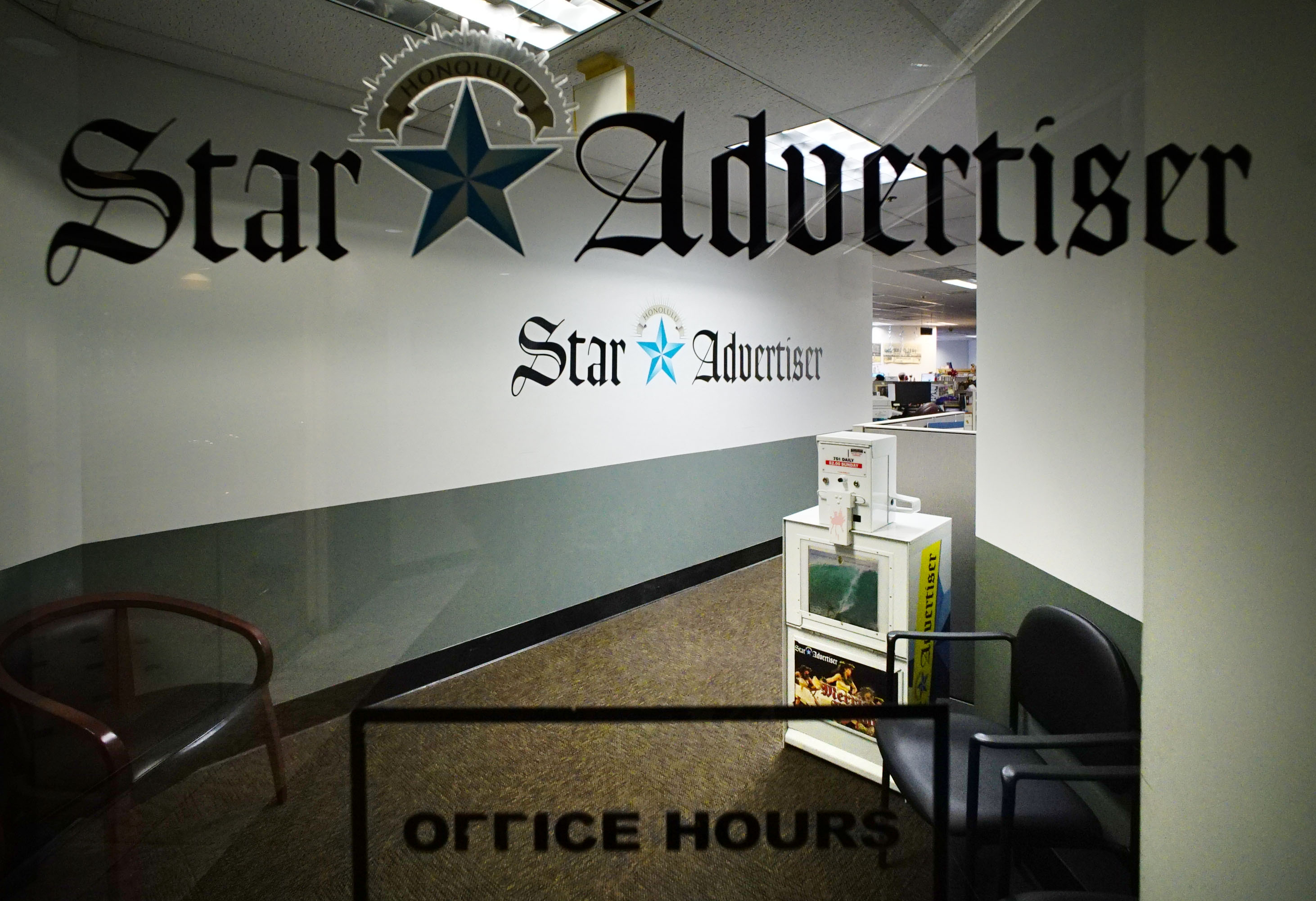 Knowing that the Honolulu Star-Advertiser has sent layoff notices to half its staff is deeply worrisome.

I am saddened for the 31 editorial staffers now concerned about how they will pay their mortgages and support their children, as well as for the community that might soon have fewer news reporters to provide accurate information during one of the wildest times for breaking news in recent history.

As a former employee of both the Honolulu Star-Bulletin and the Honolulu Advertiser, I also feel personally upset to witness the newsroom staffers being thrown topsy-turvy.

Even though I do not work for a traditional newspaper now, it is difficult to watch the turmoil.

Star-Advertiser president and publisher Dennis Francis said in a phone conversation Saturday that he expects talks to resume with the editorial employees’ union to avoid layoffs. “My hope is we will not have to go that route,” he said.

That’s my hope, too.

News reporting jobs enrich the lives of people like myself lucky enough to find the work.

The Star-Bulletin employed me when I was 16 to write a column for and about teenagers. My pay was 50 cents a column inch, about $5 a column.

Although I was the most insignificant player in the Star-Bulletin newsroom, I was glad to find a place early on where I fit in among hard working, fun people driven by an honorable purpose.

‘All I Ever Wanted’ Was A Newspaper Job

That modest start led in the years after to almost everything good that happened in my life, including getting hired by the Honolulu Advertiser when I was 24 years old for the opportunity of a lifetime to cover the Vietnam War.

The local newsrooms were where skilled journalists patiently taught us the trade, also where I made some of my best friends and met my husband of 50 years, Bob Jones.

Michael Tsai, who has worked as a reporter at the paper for almost 20 years, most recently on a temporary contract, was among those getting a layoff notice.

“Most of my life all I ever wanted was work at a newspaper. I was blessed to be able to do so for as long as I did,” he said.

Tsai is among the lucky ones on the layoff list because he has a full time job as an assistant professor of English at Kapiolani Community College.

When I worked as a print reporter we never made much money but we always looked forward to pay raises instead of pay cuts.

Since the pandemic, staffers at the paper have endured what amount to 20% pay cuts by their agreement to work four days a week instead of five.

Management has taken 10% pay cuts, according to Francis.

Star-Advertiser management may have issued the current layoff notices as a negotiating tool to pressure employees to accept deeper pay cuts as the paper tries to make up for economic losses during the pandemic.

But to those who were informed by email Thursday to expect to be out of work June 29, the message was taken seriously. According to reporter Dan Nakaso, the news was “shocking.”

Health reporter Kristen Consillio, who has been writing multiple stories each day during the COVID-19 pandemic, called it “a sad time.”

“I am preparing to be laid off. I don’t see any way out of this. The ship is officially sinking,” she said.

Nakaso and Consillio are among 15 out of 34 reporters who got layoff notices based on seniority. The notices hit a wide swath of the editorial staff, included columnists Lee Cataluna and Christine Donnelly and reporter Mindy Pennybacker, as well as copy editors, photographers, clerks and graphic designers.

“The night I found out about my layoff I immediately began looking for jobs online. What else are you supposed to do? Nobody is telling me the layoffs are not official. I have responsibilities to my family,” Nakaso said.

“This was appalling,” said Michael Applegate, executive representative of the Pacific Media Workers’ Guild, the union that represents the paper’s employees.

“If the layoff notices were not serious, what an awful way to treat your employees.”

In our phone conversation, publisher Francis said, “The talks with the guild are still ongoing. I am hopeful. Layoffs are certainly something I do not want to do.”

Oahu Publications, which runs the Star-Advertiser, is owned by Black Press, a Canadian company. It informed the guild Friday that it wants to resume negotiations but it did not set a date.

“I don’t know many businesses that could sustain a loss like that and the scary part of that projection is we just don’t know.  When you have 240,000 people out of work, that is a great reduction in spending power,” he said.

Newspapers’ primary source of revenue is from advertising, which has been plummeting as businesses over the years have found alternative ways to advertise on the internet such as Facebook, websites and other venues. Now with the COVID-19 business shutdowns there is very little to advertise.

The paper has been helped by eight weeks of funding through the CARES Act Paycheck Protection Program, but that federal assistance is running out.

Francis says among the possible savings measures the paper is seeking are temporarily continuing the four-day work week for employees, holding off until next year the employees’ negotiated 1% pay raise — supposed to take effect in May — and furloughs, or a combination of such cuts.

“Obviously I don’t want to negotiate in public,” he said.

Nakaso, who is a member of the union’s bargaining team, said after a guild meeting Sunday, “We have got a plan, a financial plan we want to present to the company that will come at great financial cost to our members. But our goal is to save jobs.

We want to continue what we do which is providing great journalism.”

Union executive Applegate says it is an evolving, fluid situation but she remains hopeful.

And Francis said, “Absolutely, unequivocally, the Honolulu Star-Advertiser will remain a print paper with six editions a week.” The paper ended its Saturday print edition May 9 and is now only available on Saturdays online.

As someone who still loves to read a newspaper with morning coffee, I was glad to hear at least one positive note. 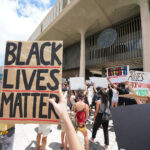 A Demand To End Anti-Black Racism

I think the single biggest failure of the SA is it's content. Local news stories are shallow and superficial at best, rarely in depth information is provided or learned. All national or global stories are grabbed off AP wires services like NYT. As a conservative I really have no desire to read the SA that not only 'leans' politically left, but their editors push their bias with a bulldozer at their readers. Its nauseating. I can take the politics, but just trying to glean general news and information concerning events here in Hawaii seems challenging each day. I review their daily online, clinging to a print edition seems like a costly waste. Those who demand a wasteful print paper daily should pay a handsome price for it. However, their digital version desperately needs help, too. The auto refreshing of the online paper is a painful distraction when reading. Needs a LOT of work and improvement. I subscribe to WSJ online. The SA should use that as a model.

The Honolulu Star-Advertiser could try and help their situation by marketing their services/paper.  I have never seen an ad for the paper.  They are not trying to sell their benefits to new readers.  They have many benefits to offer the mobile news crowd.

I still receive the Star Advertiser daily (well, 6 days/wk since they shut down Saturdays), and they've really cut back on the number of sections and the paper has gotten a whole lot thinner - probably no surprise that they don't need as many staff given the far fewer articles being published.  The paper used to do these big, investigative pieces that were interesting and newsworthy - but that's long gone.  My heart goes out to all those who may be laid off however, to be honest, the level of journalism and objectivity in their articles have really declined over the years which has probably contributed to the run-off in subscribers and advertising.