Denby Fawcett: Her Son Survived COVID-19. His Struggles Are Far From Over - Honolulu Civil Beat

Denby Fawcett: Her Son Survived COVID-19. His Struggles Are Far From Over

The mother of a young man who survived COVID-19 is worried that people in Hawaii are ignoring the seriousness of the pandemic. 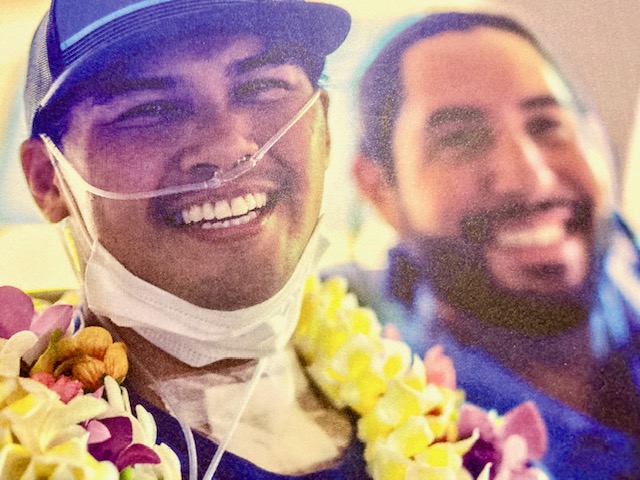 On Saturday, Hawaii announced a record 73 new COVID-19 cases, with 64 cases reported Sunday. A number of the afflicted were reported to be younger to middle-aged people who appeared to have contracted the disease while attending parties and socializing at bars.

“COVID-19 is not a party. People need to treat this virus seriously. It is agony for any family,” says Peggy Torda-Saballa.

She wants people to know that even after a person is released from the hospital there can be lifelong medical damage.

“You don’t just recover and go home and everything is fine,” she said.

Peggy’s son is Lee-Jacob “Coby” Torda, the Waikiki bartender who contracted COVID-19 in March, apparently while at his job mixing drinks in a popular tourist bar.

He was released from Kaiser Permanente Moanalua Medical Center on May 29 and is recovering in the family’s Ewa Beach home, burdened by numerous lingering after effects of the disease.

Peggy says Coby will have to be on oxygen for up to two years. His lungs were scarred by the disease. Dr. Donald Helman, his pulmonologist, told them Coby’s lungs will operate at only 80% of their former capacity.

She says he has lost muscle tone as well as his sense of smell and taste and has memory problems. He is also prone to coughing spasms.

Putting A Face On COVID-19

Coby for a while was the only coronavirus victim many Hawaii residents knew by name. He put a human face on a disease that most residents followed in news reports based on the Department of Health’s daily tally of cases and deaths — a statistical report with few personal details.

I emailed back and forth each day with my daughter, who is living in Canberra, Australia, discussing the COVID-19 struggle of “the bartender” who became “our bartender” and then after we found out his name from a news report, “Coby.” We prayed for him. Even though we didn’t know him, we sent a note to the hospital.

We weren’t the only ones concerned about Coby. More than 300 people sent him letters from as far away as New York and Brazil.

Coby defied a key stereotype proffered in the early days of the pandemic — that the coronavirus was a life-threatening disease that sickened and killed primarily elderly people and the medically frail already battling other medical conditions.

Coby was 37, a fit athlete, a hiker, a mountain climber who worked out daily at a gym. Devoid of medical issues, he was the picture of health.

Yet he was hospitalized for 69 days, most of the time on a ventilator.

From the beginning, it looked bad. When his mother was allowed in to see him for a few minutes in the intensive care unit right after he was admitted to the hospital, he was sedated and intubated, a sight that left her deeply shaken and fearful for his life.

“It was like I was looking at a corpse. It just broke my heart,” she said.

He is the youngest of her six children.

Peggy, a 71-year-old nurse, got the coronavirus herself as did Coby’s husband, Scotty Staples. But she said both of them were asymptomatic and never felt sick. She said all that happened to her was she lost her sense of taste and smell, which now is slowly returning.

This is another reason why she wishes more people were cautious.

“You can get the virus, feel like you have nothing wrong with you and go out and infect many other people,” she said.

And you never know how severely the disease will affect you.

Coby’s condition worsened after he got pneumonia and acute respiratory distress syndrome. The medications were not working. A priest was called to deliver the last rites to Coby in isolation in the ICU — the other horror of COVID-19: a patient must go through it alone.

Peggy and Coby’s husband finally got to see him but only on the day before he was to be released, more than two months after he had been admitted.

He could barely speak but he let them know he wanted yogurt. He had lost 80 pounds, going from 240 pounds to 160. He was hungry and talked about Popeye’s chicken sandwiches and bowls of Vietnamese pho.

“I didn’t think he was going to make it,” Peggy said. “It was a miracle. The doctors said he probably survived because of his age and his very strong physical condition when he got sick.”

Peggy also believes his condition was perhaps eased by family members’ phone calls to him every day to say “good morning” and “good night.” Even though he was in a deep coma, maybe he heard us, she said.

“If the coronavirus has not hit your family, you don’t know how severe it can be,” Peggy said. “It hit us very hard. I hope people will absorb what I am saying and be careful. I don’t want people to suffer like we did.” 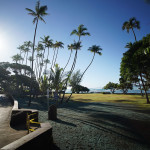 Thanks so much to Coby and family for sharing their story with the public. I hope this knowledge will influence many to take this virus seriously and practice mask wearing, proper hygiene and physical distancing to slow the spread of this devastating and potentially deadly virus. I wish you a complete recovery, Coby!

I'm so grateful for this follow up story on Coby. It's wonderful to hear him and his mom, Peggy, had braved the storm and are embarking on the path to health.

Such a beautiful story amid all the ugliness of the state of our world. Wishing Coby a swift recovery.