Many folks are angry at Hawaii’s governor over his handling of the coronavirus pandemic. But booting him from office is not that easy. 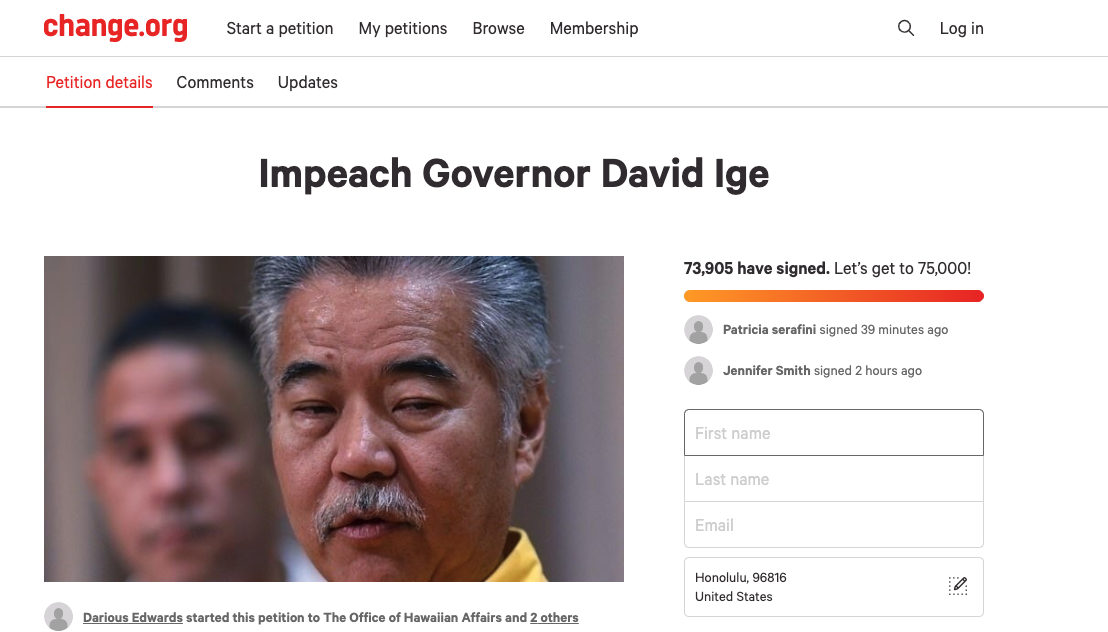 Gov. David Ige saw his health and public safety directors announce their departures Monday, the fourth and fifth department heads to leave the administration this year.

The official reason was “retirement,” but most folks think it was really because of mounting criticism of how Bruce Anderson and Nolan Espinda mishandled the state’s response to the coronavirus.

While it’s unclear just how much of a groundswell there is for kicking Ige out of office, comments in the news and on social media show that some are clamoring for a change at the top.

“None of the current economic meltdown would be happening if not for the clown-show bungling of Ige,” a reader posted on a Civil Beat story Wednesday. “This is a crisis directly borne out of his management style, his lack of vision, his inability to admit error, change his mind, or even to act decisively in a timely manner. A shocking display of outright ineptitude.”

Another reader emailed Civil Beat Tuesday, stating, “At the beginning of the COVID crisis, I thought that the Governor took the appropriate steps to protect our citizens from the spread, even with some of our hands tied by Federal guidelines. Once we reopened, he failed to continue to protect Hawaii.”

This reader blamed Ige for his failure to mass test, contact trace and protect state employees.

I wrote in this very space just three months ago that a number of the state’s top leaders lamented that Hawaii lacked “strong, decisive leadership” when it is needed most. And that’s when the number of COVID-19 cases hovered around 620 and the death count was 17.

On Wednesday the daily new case load was 339 — there have now been 8,991 cases in all — with another death raising that tally to 75.

Please Resign along with the rest of your cabinet. We are done being told our jobs do not matter. We do not want to continue with the lock down. pic.twitter.com/GD1YLTrLmY

But is it even possible that the governor — who has more than two years remaining in his second and final term — could be removed from office?

Yes, it is possible. Ige could resign, of course. That seems unlikely.

And Hawaii does not allow referendum and recall initiatives at the state level, so citizens cannot take him down on their own.

But the Hawaii Constitution does allow for impeachment, which would be similar to how it’s conducted at the federal level, as we saw within the past year regarding President Donald Trump.

The state House of Representatives “has the sole power” of impeachment of the governor and lieutenant governor, while the state Senate has the “sole power” to try an impeachment, which would feature the chief justice presiding.

The challenge with that approach is that Ige, a Democrat, would be judged by a Legislature that is run by the same party. The Senate would require a two-thirds vote, and there are mixed feelings in both chambers about whether the party wants to see Josh Green get a promotion.

The Hawaii Constitution also does not spell out the causes for an impeachment conviction, instead saying that cause “may be provided by law.” There is nothing said about treason or bribery or “other high Crimes and Misdemeanors,” as is spelled out in the U.S. Constitution.

State Sen. Les Ihara, a Democrat, introduced bills in 2013 and 2018 that proposed these reasons for impeachment:

• treason, bribery, or other high crimes and misdemeanors;
• misfeasance, malfeasance, or nonfeasance; or
• moral turpitude.

Neither bill targeted the sitting incumbents at the time, and both died quickly. But the legislation would have covered travel and attendance compensation for witnesses and court reporters.

Asked for comment about calls for his resignation or impeachment, the governor said this in an emailed statement Wednesday: “These are unprecedented times that have challenged communities and government leaders across the nation and the world. The response to the COVID-19 pandemic is complex with no easy answers. Leaders are having to make unpopular decisions to protect public health, because that is the foundation for healthy communities and a healthy economy.”

He added, “We know that any decision and action will be criticized. During this critical time, we must work together to fight the virus. And while we welcome constructive criticism, we will continue to make decisions in the best interests of Hawaii.”

No governor of Hawaii has been impeached, but Jack Burns resigned for health reasons in 1973.

Nationally, Ballotpedia says there are only 16 cases of a vote to remove a governor. Of those, nine were removed.

The last governor to be impeached and removed was Rod Blagojevich of Illinois, a Democrat accused — among others things — of trying to sell Barack Obama’s Senate seat when he was elected president in 2008. Trump commuted his sentence in February.

Before that, Republican Evan Mecham of Arizona was convicted and removed from office in 1988 “for misuse of state funds and his inflammatory racial opinions” but later acquitted of all charges during criminal proceedings.

The National Conference of State Legislatures calls impeachment relatively rare, although all state constitutions except Oregon’s include an impeachment doctrine. Impeachment is regarded as a power “to be used only in extreme cases,” and people “frequently resign” before the impeachment proceedings begin or are completed.

The most prominent recall of a governor took place in California in 2003, when Gray Davis was voted out of office in “a rare do-over,” the Los Angeles Times reported in 2013.  It was due to “an anti-government, anti-establishment convulsion unlike any ever seen.”

The last governor to resign from office was Robert Bentley of Alabama, who resigned in 2017 following a political scandal and arrest.

What Are The Chances?

I talked to one akamai leader at the Legislature who said it seemed unlikely that Ige would be impeached. In order for that to happen, this person said, legislators would need to see strong support from the public.

The efforts in that regard seem minor, at least as of right now.

There is an Impeach Governor Ige twitter hashtag that has only six followers. A Facebook page, Impeach David Ige, has about 500 followers.

There is also an Impeach Governor David Ige petition at change.org that has attracted about 74,000 signatures. But it was actually launched last year, when it was claimed that Ige was not “upholding the laws that protect the Hawaiian people, Hawaiian sacred land and the laws protecting Mauna Kea.”

There is also a moveon.org petition that has just 62 signatures. A Robert G. posted on it two weeks ago, “Worst governor ever. His illegal quarantine through 7/31/2020 is killing the (state) economy, while he collects money in lives in a castle. What a tyrant.”

That petition appears to have been launched last year, too, and is mostly focused on Native Hawaiian rights. It also mistakenly states that Attorney General Donald Chin should be impeached along with Ige, even though his name is Doug Chin and he hasn’t been in office since 2018.

Honolulu Mayor Kirk Caldwell is also under fire for his leadership during the pandemic, but he is in the last year of his final term. Either Rick Blangiardi or Keith Amemiya will take the reins come January.

And then it will be the new mayor’s time in the viral hot seat. 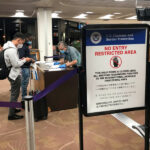 Why We Should Set The Bar High On Testing Visitors

In general yes, however, that would mean the Senate and House have the spine to do it, which they don't. I bet if we had a Republican Governor, they would have already impeached.

David is a genuinely nice guy with whom I've had some contact since the 1990s. That is to say, I like him personally. I must add though that I think he's been terribly out of his depth as Governor and clearly, not suited for a job that requires decisive decision-making and the communicative talents to reassure the people of Hawaii and explain the rationale behind the decisions.

I don't think he will be impeached.  Not sure anyone would be any better.  What specifically would he be impeached for?  For opening up too soon?  May have been a bad decision but impeachable?  How many at the time opposed him?  I don't remember anyone.