Chad Blair: How One Maui Resident Is Working To Help Ballots Arrive In Time

The #LeaveRoomForBallots campaign urges folks to mail their ballot in early and to minimize postal service in October. 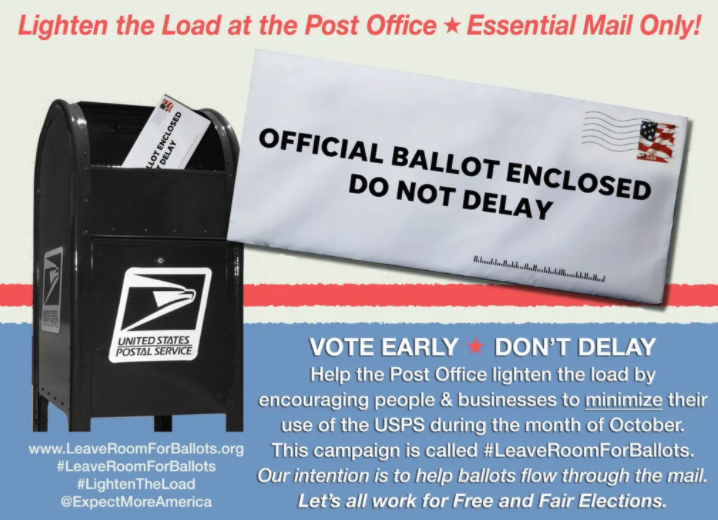 Maury King of Wailuku has an idea on how to ensure that mail-in ballots get mailed in.

His #LeaveRoomForBallots campaign asks people and businesses to #LightenTheLoad — another of King’s social media hashtags — of the U.S. Postal Service next month.

If you don’t need to place a big order from Amazon in October, for example, don’t. Do it this month or after Election Day on Nov. 3.

The purpose is to “leave room” in the mail system for “ballots to move smoothly,” as a press release advises.

“The concept is to ask people to ease up on anything nonessential for the month of October,” King told me recently. “Do your ordering online ahead of time, and don’t send out Christmas cards earlier.”

He added, “And if you know anyone who works for a big company, ask them to contact our campaign or ask them to do their next bulk mailing after the election. That would be awesome.”

The possibility that a mail-in ballot might not arrive to state and county elections offices in time to be counted is real. President Trump has been calling voting by mail a bad system that will result in fraud and rig the election, even though Trump is pushing a false argument and he himself votes by mail.

Experts do say that voting by mail is more vulnerable than voting in person, however. Ballot harvesting — collecting absentee ballots and filling them out in favor of a certain candidate — or voting twice — by mail and in person — does happen.

But the incidents have been few and are often detected by election officials.

Still, NPR reports that around 37% of Americans cited in a recent survey “say they plan to cast their ballots by mail this year.”

Absentee ballots for the November election were mailed out to North Carolina voters earlier this month, and voters in about two dozen other states will begin receiving their ballots later this month.

In Hawaii, some ballots could arrive in mail boxes as early as Oct. 8 or 9, well ahead of the state’s original plan to get the ballots in the mail by Oct. 16. Elections officials recommend voters mail their ballots back no later than Oct. 27. After that, it’s best to drop the ballot off at a voter service center or deposit box.

There is also the matter of the pandemic.

“Because of the coronavirus pandemic a record number of Americans are expected to cast their ballots by mail this year,” says NPR.

And then there is Postmaster General Louis DeJoy, a Trump donor and appointee who has come under harsh criticism — such as from U.S. Rep. Ed Case — for making “a direct and coordinated attack on the USPS,” as Case put it last month.

Under pressure, DeJoy said he would hold off on making more major changes to the postal system until after the election, but many Democrats fear damage has already been done by disrupting delivery.

Asked about Trump’s view on voting by mail, King called it shocking and inappropriate for the president to “do what looks like sabotaging the election and making it not fair, and trying to discourage people from voting. It’s been proven that voter fraud is ridiculously low and penalties for it are harsh.”

He continued: “This will make a big mess of Election Day. It’s scary.”

King, 70, grew up in Los Angeles and later lived in Seattle. He has spent the last 13 years on Maui, which included work in real estate.

But King has also been active in his community in other ways. He is a former board member of Maui Tomorrow, an environmental watchdog.

He also founded South Maui Sustainability, which is focused on education, growing food and producing energy locally. King’s work with that group, he said, “morphed” into Grow Some Good, a school garden program.

He also penned a letter to the Maui News last year to boost legal cannabis: “C’mon, lawmakers. You know it’s coming. Let’s get it done in 2020. And please, structure things horizontally. I’m a cannabis voter. Where do you stand?”

For the #LeaveRoomforBallots campaign, King has spent a couple of thousand dollars, which included asking Taryn Kama of Go Get it Gal and Go Get it Media to help with PR. That’s how I learned about King’s work.

“Please ‘Like’ our campaign (on social media), and if you want to help, contact any bulk mailers you know and ask them to participate by scheduling their mailings to avoid this critical time period,” Kama’s press release states.

Friends of King’s helped out with graphic design and web work. And King has reached out to Bill Maher, who recently pitched a similar idea on his show. (No word yet from Maher.)

“I had the idea first, but I am happy to have the word get out there,” said King. 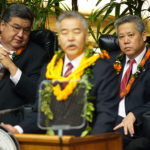 Dear Saiki And Kouchi: Please Help Save Hawaii From Ige

I love this action!  Also tired of the singular "vote" message, I have been contacting universities in crucial states (AZ, PA, WI, MI, FL, NC), asking them to encourage their students to make plans early as to how they'll vote (mail-in/? in--person?)  I've just shared this story with several organizations working toward free and fair elections. Mahalo nui 'ia 'olua.

Part two of two . . .Are you aware the USPS only may invest in U.S. Treasuries, which deliver paltry annual returns. A U.S Postal Service Inspector General study made it clear that this investment strategy all but ensures the agency will default on these obligations to its workers and the taxpayers will have to bail them out.Most federal pension dollars are invested much more broadly. The USPS should be authorized to invest some of the more than $40 billion in its retiree health benefits fund in index funds. With the stock market so low, this plan â which has support from some on the right as well as one of the postal unions â could produce huge financial returns if enacted quickly. Legislation already exists to make this happen, and it can be cut and pasted into the rescue package.Call / write your legislators to inspire them to act on existing legislation. Specifically:  H.R.2382 â 116th Congress (2019-2020). Passed the House on 02/05/2020

Part one of two . . . Balancing this concept with the notion that post election, how might we (as consumer) step-up our support to help the USPS remain open?  Less or no revenues coming in for a couple months must be off-set with significant increase in revenues.  Remember, pre-purchased - "Forever" stamps are actually a USPS liability.  When I purchase a 100 "forever" stamps with a face-value of .55¢ - when postage increases to .60¢ - USPS then 'eats' .05¢.Best way to help USPS!  Change the law requiring the USPS to fund its retiree health benefits fund, which has a $70 billion shortfall.