Denby Fawcett: Adults Hijacked Halloween Decades Ago. This Year The Kids Will Get It Back - Honolulu Civil Beat

Denby Fawcett: Adults Hijacked Halloween Decades Ago. This Year The Kids Will Get It Back

A return to simple family pleasures has been one of the few bright lights of the pandemic. 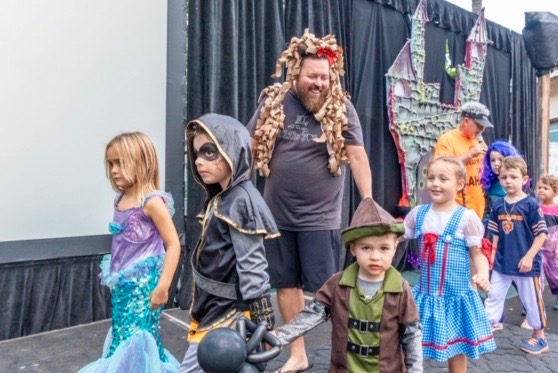 The upheaval of the pandemic has delivered an unexpected gift: the return of Halloween to children.

Adults stole Halloween years ago, turning it into a boozy bacchanal.

But this year with bars closed indefinitely and Mayor Kirk Caldwell urging police to show up in force to clamp down on revelers, it won’t be much fun for grownups who want to prance around in public in costumes.

The safety recommendations for Halloween are for adults to entertain their children at home with old-fashioned activities like scavenger hunts, or to chauffeur them to costume parades or through community-sponsored haunted mazes in parking lots where everyone stays in their car.

Adults are encouraged to serve their families this year instead of carousing in streets filled with police deployed to arrest them.

For sure, the events this year are different than the exciting Halloweens I remember as a child, when we dressed up and went out in the dark pretty much by ourselves except for a few adult chaperones. But it still seems fun.

Most of the big, splashy Halloween events that drew adults out to party in the past such as the Hallowballoo Music and Arts Festival in Chinatown and Halloween in Lahaina have been cancelled because of the pandemic’s social distancing requirements.

Mayor Caldwell also wants celebrants to keep out of Waikiki, where grown ups have been massing for years to swan down Kalakaua Avenue, ogling each other’s costumes and slipping into bars for cocktails.

Diamond Head Theatre, which used to rent hundreds of its costumes to adults for Halloween and other dress up events, has closed its costume shop to the public because of the pandemic.

She says costume rentals brought in extra revenue to the theater but less lately as adults turned to online shopping for costumes or buying them from Goodwill.

Adult costume purchases for Halloween have become a big business. The National Retail Federation said last year Americans spent $3.2 billion on costumes for themselves and their children.

That included $29 million spent for Halloween costumes for their pets; the most popular costume for cats and dogs was a pumpkin, followed by dressing them as hot dogs and super heroes.

The retail federation says there still will be big spending this Halloween — an expected $8.05 billion — despite the pandemic, but it will be mostly for home decorations, greeting cards and candy.

I can’t remember exactly when adults stole Halloween from children.  It seemed to have happened gradually.

National Public Radio jokingly refers to the holiday hijacking as “the adulteration of Halloween.”

My parents liked to have costume parties for their friends on occasions, but their parties were cheerful events out on the lawn by the ocean rather than Mardi Gras-like celebrations on packed public streets with more than 20,000 adult strangers such as I once experienced at Lahaina’s Halloween on Front Street.

In 2008, Lahaina’s Hawaiian cultural groups got so fed up with drunken behavior and skimpy costumes worn by revelers for the Front Street Halloween that they successfully urged the county to deny the organizers a permit.

That was extreme but nothing as dramatic as in 1978 when Mayor Frank Fasi cancelled Halloween because of heavy flooding — to the dismay of thousands of children ready to go out in the rain in their costumes.

Fasi declared that Halloween instead would be on Nov. 1, which sparked a fight between him and then Gov. George Ariyoshi, who said Fasi had exceeded his authority.

In Lahaina, Halloween on Front Street did not resume after the shutdown until 2011 when the town’s businesses begged for a return of the $3 million in revenue the event had generated from room rentals, bar and restaurant sales and retail shopping.

Lahaina businessman Sne Patel says since then it has gradually become more of a family-keiki affair.

“We have worked hard over the last five years in shifting Halloween in Lahaina to a family event focusing on children and art installations throughout the streets,” he said in a phone call.

Patel is president of the Lahaina Town Action Committee, the nonprofit that organizes the Halloween event.

This year Lahaina’s child-centered Halloween will feature a drive through costume parade in the Outlets of Maui parking lot where actors will appear at stations dressed as spooky creatures and children will receive goodie bags of candy.

Maui will also host a drive through Halloween in the parking lot of Keopuolani Regional Park in Kahului.

On Oahu, there are contactless Halloween celebrations planned for kids including the trunk-and-treat drive-thru at Aloha Stadium and a drive through event hosted at the Pumpkin Patch at Waimanalo Country Farms.

My friends have their own ideas for safe events for their children and grandchildren including Halloween candy hunts at their homes and gardens like Easter egg hunts and Pumpkin piñata bashing and socially distanced costume contests.

It is going to be different. But nothing is the same anymore.

And for many, a return to simple family pleasures like picnics, fishing at the beach and home dinners have been one of the few bright lights of the pandemic. 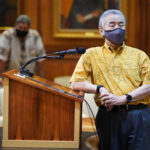 Tom Yamachika: Someone Listened To My Howl In The Woods

Reading the headline of the article was, to me, more interesting in than the article over all. I always believed that holidays are for all ages and never left anyone out. In my opinion, Halloween is meant for everyone, for the kids running up and down the street, to the young adults at parties. This year was different. Parties where canceled and large get togethers where not tolerated. I feel this year the kids did have the best Halloween out of everyone. One thing that I hope is not true about the article is that this is a forever thing. People hopefully will throw parties and get togethers are not the thing of the past. If we never allow the big parties and the get togethers I feel like costume stores, restraints and bars will suffer. I feel as though if we keep thinking that this pandemic is a forever thing we will never move forward. Yes, it might take a few year to get back to what was normal but we still have to look for the bright side of things. I feel as though once a vaccine comes out Halloween, Christmas, Easter, Thanksgiving, etc will all go back to the way it was. Overall I think that Halloween is meant for everyone, and that we need to fight for what we call "normal".

This article made me realize that Halloween is different for children compared to adults. For older people, may go out and party on Halloween. They go to a bar or a festival where they can dance and drink. However for kids, their Halloween is them dressing up and going trick or treating around the block. But the idea of Halloween is the same; it's a day where everyone can dress up and have fun. I like how many are finding different ways to celebrate Halloween during the pandemic. Although for me it didn't feel like Halloween this year, it really helped keep the Halloween spirit alive for many people.