House leaders need to hear Senate Bill 132, which would prohibit sales of avobenzone and octocrylene.

Cindi Punihaole is a kamaaina of Hawaii Island and the director of the Kahaluu Bay Education Center, a program of The Kohala Center. Her resource management practices are driven by the unwritten social codes reinforced by her ancestors called pono practices.  Punihaole was recently recognized as a Reef Hero by the advocacy group Dear Ocean.

Ted Bohlen is an advocate on the climate crisis, coral reef, and other environmental issues. He served for 40 years as an environmental attorney representing the states of Hawaii and Massachusetts.

Lisa Bishop is president of Friends of Hanauma Bay and leads the Hawaii Coral Reef Stakeholders Hui, which advocates for improved stewardship of Hawaii’s coral reefs.

There is another big sunscreen issue in Hawaii, and this one needs immediate action.

Although two harmful chemical sunscreens have already been banned in the state, there is strong scientific evidence that two more are harmful to both human health and coral reefs. In fact, mounting research suggests that these two chemicals, avobenzone and octocrylene, are life-threatening to Hawaii’s reefs and are bad for people, including our keiki.

Neither the coral reefs nor the children can speak up to protect themselves from these toxic chemicals. But some people have: a group of 50 organizations, businesses, individuals, and eminent scientists, representing more than 1,000 constituents and concerned citizens, submitted testimony and evidence supporting a bill to ban these harmful chemicals in Hawaii.

The evidence against avobenzone and octocrylene was so strong that Senate Bill 132 passed the Hawaii Senate and one House Committee unanimously. Unanimously.

The dangers of sunscreen chemicals are well recognized around the world. They are reef toxins that irreversibly interfere with the life cycles of Hawaii’s marine life including corals, algae, fish, shellfish, sea urchins, and marine mammals.

Avobenzone can cause hormone disruptions and has been shown to be toxic to marine plants. Octocrylene is a chemical pollutant prevalent in coastal environments, and it has been found in Hawaii’s coral reefs. Research shows that it collects in coral tissues and reduces their resistance to coral bleaching.

Octocrylene is a “hormone disruptor” that’s been shown to cause deformities in the brains and reproductive organs of developing fish, possibly threatening entire populations. It’s also been found in the fish and shellfish that we eat. Octocrylene affects thyroid function and delays testicular development and causes problems with female reproductive organs. It also degrades into a chemical called benzophenone that can cause cancers.

The Environmental Protection Agency, Center for Disease Control, American Cancer Society, World Health Organization, as well as hundreds of scientists and dermatologists, have reported that certain chemical sunscreens are harmful to many forms of life — including humans — and have not been shown to decrease skin cancer.

The FDA does not recognize avobenzone and octocrylene as safe and effective for use in sunscreens. Knowing what we know, why would we want to apply sunscreens containing octocrylene or avobenzone on our keiki?

There are alternative sunscreens on the market today that ARE approved by the FDA as safe and effective: zinc oxide and titanium dioxide offer better skin protection with less environmental harm. Even better for human health and the environment is to avoid the sun between 10 a.m. and 3 p.m. and/or to wear a broad-brimmed hat and covering clothing.

Our reefs are in crisis now and are truly at risk of being lost forever.

Sunscreens containing octocrylene and avobenzone should be banned from sale in Hawaii based on the Precautionary Principle alone. This states that “the burden of proof for potentially harmful actions by industry or government rests on the assurance of safety” and that any scientific uncertainty must favor prevention.

In other words, our elected officials shouldn’t use the excuse of “not enough evidence yet” to postpone hearing SB 132, especially when they’ve been presented with the risk of serious and irreversible harm based on scientific findings from around the world.

If you believe that the Hawaii House should at least allow hearings on this bill, let your voice be heard. Contact your government officials. Don’t be ignored.

Please email the Speaker of the House, Representative Scott K. Saiki (repsaiki@Capitol.hawaii.gov) or call his office (808-586-6100). Ask him to allow hearings to determine if these toxic sunscreen chemicals, octocrylene and avobenzone, should be allowed in products being sold in Hawaii.

Please also email Rep. Aaron Ling Johanson (repjohanson@Capitol.hawaii.gov) or call his office (808-586-9470). Ask him to explain why the CPC failed to schedule a hearing for SB 132.

We can’t just wait for another legislative session to come around. Our reefs are in crisis now and are truly at risk of being lost forever. 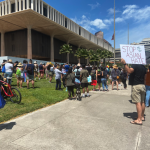 Cindi Punihaole is a kamaaina of Hawaii Island and the director of the Kahaluu Bay Education Center, a program of The Kohala Center. Her resource management practices are driven by the unwritten social codes reinforced by her ancestors called pono practices.  Punihaole was recently recognized as a Reef Hero by the advocacy group Dear Ocean.

Ted Bohlen is an advocate on the climate crisis, coral reef, and other environmental issues. He served for 40 years as an environmental attorney representing the states of Hawaii and Massachusetts.

Lisa Bishop is president of Friends of Hanauma Bay and leads the Hawaii Coral Reef Stakeholders Hui, which advocates for improved stewardship of Hawaii’s coral reefs.

MEDICAL FACTS: 100s of publications show organic UV Filters  pollute humans, the fetus, wildlife, the global water supply, and coral. They bathe every cell in your unborn or young childâs body - even brain. ALL behave like, estrogens, pesticides and DDT, etc. OXYBENZONE was patented as a herbicide by Monsanto in 1951. Most are linked in humans and wildlife to birth defects, hormonal and reproductive disorders, infertility, obesity, certain cancers and MORE. My duty is "First Do No Harm" for patients and family. Industry and their sycophants ignore the Precautionary Principle and imperil the planet. Either choose to err on the cautionary side or take the risk of polluting your progeny. I choose not to and advise prudent parents to do the same. Why - only risks - no benefit - no evidence these petrochemical sunscreens prevent skin cancer - Silva et al (2018), and even dermatologists are waking up to the fact- Waldman & Grant-Kels (2019). No surprise - never designed to do so - only to prevent sunburn - mostly a UVB action. Zinc oxide and other UVA filters can prevent skin cancer with little risk - never enter your childâs body. Benefit no Risk- for humans, the coral and the planet.

All I know is Hawaii's surrounding reefs have looked a lot better during this pandemic with the sharp decline in tourism.  Anything that can help maintain this is a no brainer.

I'm disappointed that this piece has only two links to back up its claims. One link is far too narrowly focused on octocrylene and fish development. The other far too broadly encompasses too many sunscreen chemicals - including the ones the article itself promotes as safe: zinc oxide and titanium dioxide.Avobenzone & octocrylene have not been shown to be harmful to humans.Per Harvard Medical School's "Keep using sunscreen while FDA updates recommendations on safety of sunscreen ingredients":