Football plays on nostalgia and hope, but two proposals for a new stadium have yet to show that they're good ideas -- or feasible. 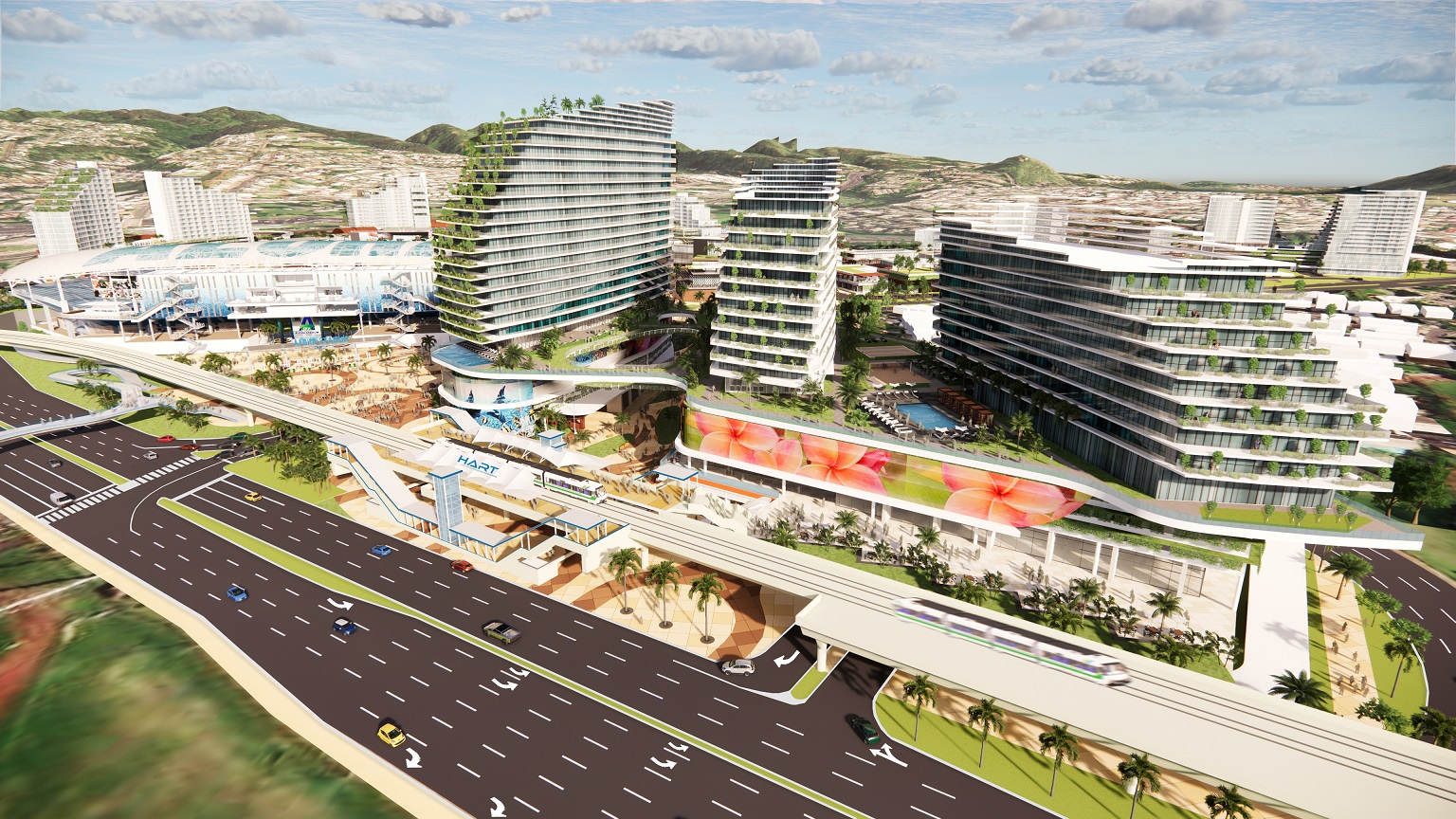 Here’s one of my own favorite Aloha Stadium memories. It happened over 30 years ago at the Saturday Swap Meet.

We were getting rid of a bunch of stuff from our attic. About an hour into the sale, a slight, old woman stopped to look at the electric Dutch oven we were selling.

“How much?” she asked in a soft voice.

“I don’t know,” I said. I thought that was the end of it. Hey, it’s a swap meet. Either walk away or pay the buck and take your chances.

Instead, she picked up the oven and made a “follow me” gesture with her finger as she headed to a side door of the stadium. I had no idea, but she knew exactly where she was going — to an electrical outlet a few yards past the entrance.

She plugged it in. Nothing happened. “No,” she said, handing back the oven, which I threw away a little while later.

Odd memory, not about UH’s Sugar Bowl team or Colt and Timmy quarterbacking the run and shoot.

But then again, when the fatally bruised and never repaired stadium closed its doors to fans for good, the Aloha Swap Meet was the last thing standing. Still is.

Stadium memories generate a lot of emotion and nostalgia, which in turn generates cool ideas like a new stadium. But cool ideas are not the same as good ideas.

Cool ideas are deceptive. They lead people to ignore realities. Don’t worry about it. It’ll work out. We can deal with the details later. The idea is so way cool.

The way you deal with cool ideas’ hype is to ask questions, the answers to which determine whether a really cool idea is a really good idea.

Let’s ask those questions about two competing cool ideas about building a new stadium. One, let’s call it the Entertainment District, has already begun to get at least a little traction even though it for sure has not yet moved from a cool idea to a good one.

The other is the recent proposal that three of our former governors have made to build the stadium on UH’s Manoa campus instead of on the old site in Halawa. The Aloha site, they say, should be used entirely for housing.

After all, the Legislature’s plan for a Halawa entertainment district, along with housing and a stadium still seems like smoke and mirrors. The state is awaiting bids in a two-fold process that has modified its previous fiscal assumptions.

Visions have been envisioned. Grand proposals have been grandly proposed. Developers and visionaries have been invited to develop and envision. Optimism fills the air.

We are really on to something. Trust us. Yeah, right.

But I want to focus on the governors’ proposal for a couple of reasons. It has a no-bullshit quality about it. It is an obvious attempt to put the brakes on that other overly cool plan. And the governors’ new plan seems to be popular.

So, the new plan is a cool idea that’s potentially a good idea — potentially, which means for now we need to ask some questions about it before we can decide.

Let’s get the most skeptical question out of the way.

Can the state really accomplish anything as major as this?

Rail has made us into government-constructophobes. Rightly so.

Now, UH did do a masterful job getting its tiny new jewel of a football stadium built on short notice in, by state construction standards, a nanosecond. But believe me because I’ve lived through it, that is not the way things typically go at UH.

At UH, projects show up on the drawing board, get approval, then disappear. They begin after long last, then stop. There’s a deferred maintenance list about as costly as Joe Biden’s first-draft infrastructure bill. I am not blaming the university. Most of these problems are outside UH’s control.

Keep in mind that the on-budget, on-time construction of UH’s new mini football stadium was essentially a workaround. A new stadium would more likely be a work as usual: a work in non-progress.

Tough question, right? If you think the answer is no, then that’s it. That’s the deal breaker.

If your answer is yes, then move on to the following questions.

Assume the former governors’ proposal has promise. Can these ex-leaders get enough support to overcome a Legislature and governor who have alternative plans?

The answer is, how the heck would this happen? Truthfully, I don’t know. More importantly, neither do the governors. They may still be influential citizens, but they are just private citizens.

Can it really be built on the Manoa campus? The governors propose a stadium of 25,000 or so seats but that’s all the public knows so far.

We need to know logistics — how a stadium this size would fit, and what, if anything would have to be destroyed to build it.

When it comes to UH athletics, fans as well as politicians often have scales of optimism over their eyes. UH ends up as collateral damage in this hopefulness attack.

When the ex-leaders say the stadium should be at UH, what exactly do they mean? Who will be responsible for building it? Where will the money come from?

These questions are particularly pertinent because of the pervasive and irresponsible idea that UH athletics, particularly football, is a university endeavor.

It’s not. If UH football depended on UH students to attend, the games could be played on the playground next to Kawananoka Intermediate.

UH football is a community team that gets money from student fees but includes few students who go to the games.

Consequently, UH should receive greater subsidies in return for offering these services to the community. Quit pretending that UH athletics is losing money because the athletic department has not trimmed enough fat.

Aloha Stadium operated with far too little input from UH. Putting a new stadium on campus could change this, but it could also be the same old dump-on-UH only in a different venue.

Final question: Will fans fill the stadium again? The only accurate answer now is, “We’ll see.”

Did you know that the swap meet was consistently the Aloha Stadium Authority’s biggest money maker?

Try to imagine folks selling Dutch ovens near the entrance of those behemoth, big time, 100,000-plus stadiums in Ann Arbor or Columbus.

Try to imagine a slight, portable-oven-carrying octogenarian marching past the security guards looking for a plug.

What about the new “Entertainment District”? Would a swap meet be part of that?

Sen. Glenn Wakai, a leading entertainment district booster, says no. Why collect a measly $5 million a year from the swap meet, he says, when we can get $50 million from other revenue sources.

Another person who spoke to Hawaii News Now was more sympathetic, sort of. “It would be terrible (to get rid of it) because it is a way for income for a lot of families that come here to sell things to make money to provide for their family.”

“So,” he continued, “I think that would be the junk part of upgrading the stadium.”

Junk part? It doesn’t sound like that guy is going to be taking the missus to the swap meet to sell rickety Dutch ovens any time soon.

The bigger point for now, though, is that we citizens should assume both stadium plans may be junk — portable cookers that might not work. At least until we get better answers to key questions.

We need an outlet. 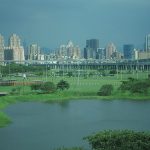 I've always thought that for the price tag of where rail is today, the state could have moved the entire UH campus to West Oahu and built a new stadium where students and the public could use it.  The entire campus would be able to be a planned community with housing, new student buildings and as a bonus much of the traffic affiliated with students getting into town would be reversed, or eliminated along with the fantasy of rail needing to get to Manoa.  Maybe that thinking it too out of the box for our politico leaders, but calling Halawa an "entertainment district" is even more out of a fallacy.  What entertainment does the state envision?  Aside from sparse UH football games, are they expecting major concerts or events to be booked in Hawaii, which is not only remote, but expensive?  Looking at the track record of the convention center and mis management of the Blaisedell, can the city or state run such a district profitably?  It appears that the public is being led down the same fantasy path promised with the train, a lot of talk with little results, all while costing taxpayers multiple times the cost and time to complete.  That is a standard state project.

Seems that tailgating is out at Manoa, and I see no plans for it at the new venue !It is an outlet for most of us !

Ching Stadium has a capacity of 9,000. If you can find a way to build up around it to increase it to 25,000, thatâs great, go and do that. Otherwise, do not take any scarce land for a large and expensive building used only a handful of times a year when there isnât enough room for affordable residential housing, classrooms, research facilities, and other things that make a university, yâknow, a university.For the record, I think Ching can be built out to add another 16,000 seats, give or take. Keep UH football and UH, let game-goers park in the existing parking structure or nearby on campus (as they already do with basketball), and make sure The Rail goes to UH Manoa sooner rather than later.And one other thing, the lesson to learn is not that we shouldnât do large construction projects because The Rail had cost overruns; we need to figure precisely out what reasons caused it to happen and implement measures to make sure it doesnât again. Because even if you hate The Rail, the same thing will happen when your beloved Interstate H4 is put in (thatâs what you wanted instead of The Rail, right?).