Chad Blair: Here's Why Honolulu Is Looking Greener Than Ever - Honolulu Civil Beat

Chad Blair: Here's Why Honolulu Is Looking Greener Than Ever 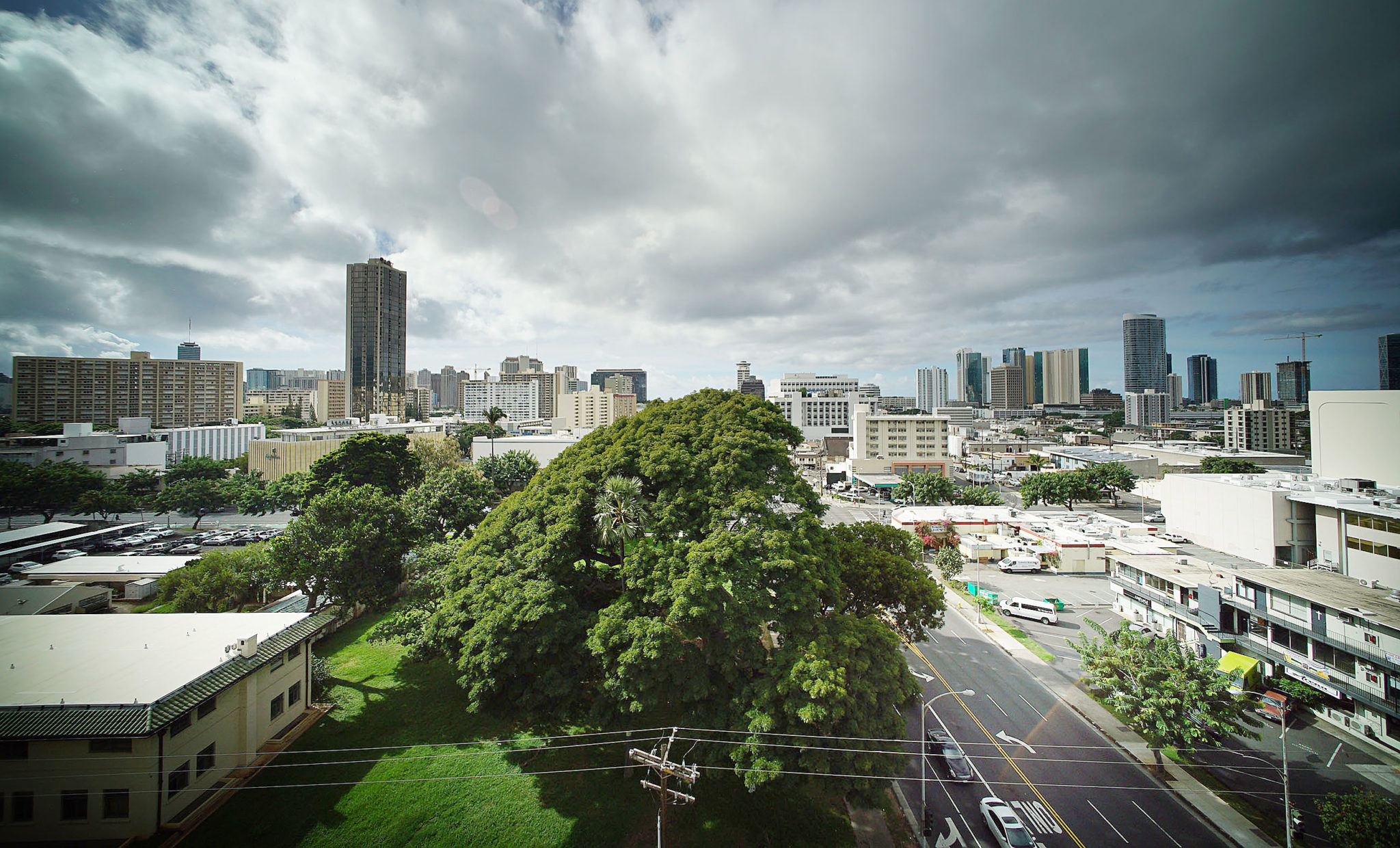 Are you noticing, like I am, that our city and county are looking more leafy? And I am not just referring to all the recent rain that has left our streets and yards littered with debris.

Rather, while Honolulu has long benefited from a sizable tree population that helps to break up the beige of many duplexes and high rises, recent efforts from the government, private and nonprofit sectors are making for even greener-looking communities.

It’s a good trend that promises a better home and planet. That idea needs to be more widely embraced as tree advocates seek to grow an urban tree canopy. As the nonprofit Trees For Honolulu’s Future says, Honolulu’s canopy covers just 20% of the city, lagging well behind other cities nationally.

More on that in a moment. Let’s first give shoutouts to state and county officials who have embarked on tree planting and protection efforts.

“Forest carbon projects withdraw carbon dioxide (CO2), the greenhouse gas largely responsible for global climate change, and stores it in trees or other biomass. The actions planned until the end of this decade will contribute to our net-negative carbon goal.” Suzanne Case, chair of the Department of Land and Natural Resources, said in a press release.

Case pointed out that in 2017 Hawaii forests sequestered 2.69 metric tons of carbon dioxide. The new initiative is linked to the campaign by a group called 1t.org, whose goal is to plant 1 trillion trees globally by 2030. It’s part of the World Economic Forum’s efforts to accelerate nature-based solutions set up to support the United Nations’ Decade on Ecosystem Restoration 2021-2030.

The DLNR has expressed its devotion to trees in other ways, too. In early November it held its fifth-annual Ohia Love Festival, which celebrates the state’s endemic trees. It coincided with Arbor Day — Nov. 6 — when DLNR’s Division of Forestry and Wildlife distributed thousands of trees for free.

The adoptions were made possible through partnerships on Oahu with Trees for Honolulu’s Future, the Malama Learning Center and Ke Kula Nui O Waimanalo; on Maui with the Maui Nui Botanical Gardens; and on Kauai with the Garden Island Resource Conservation and Development.

Trees do more than just improve air and water quality. They also impact the health and well-being of communities.

On a personal note, I can testify that spending 20 minutes or so a day viewing the giant ulu and mango trees in my Manoa yard reduce my blood pressure and help me get through another day of the never-ending pandemic.

“Before people arrived, almost all the Hawaiian Islands were covered in native forest and shrublands,” a press release explained. “Oahu has now lost over 80% of its original native forest.”

Native vegetation, the DLNR explained, absorbs rain and cloud moisture and moves it quickly into the ground like a “giant living sponge.”

The City and County of Honolulu is also in the tree-planting business.

In October, the Department of Parks and Recreation’s Division of Urban Forestry planted 44 street trees — tulipwood, white tecoma, geometry and silver trumpet — in the Downtown-Chinatown area.

“Looking long range, planting a tree is one of the best things we can do to profoundly benefit future generations,” Blangiardi said in a press release. “It’s especially important to get our keiki involved in this process, so the kids can grow along with the trees and have an innate appreciation for the many environmental, economic, and psychological benefits trees provide.”

The press release added that trees reduce ground temperatures by up to 9 degrees, minimize energy costs up to 25% by shading buildings and absorb traffic sounds by 40%.

That same month the city’s Department of Parks and Recreation’s Division of Urban Forestry announced a new partnership with the School for Examining Essential Questions of Sustainability to plant and care for native plants and trees at Liliuokalani Botanical Garden downtown.

The plants included many native and “canoe” ground cover — referring to plants introduced by Native Hawaiians centuries ago — and shrubs and trees: mao, ilima, pia, pau o hiiaka and more.

But efforts clearly have kicked up. Mahi Pono — the Maui-based farming company — said in November that it had reached a milestone of planting 1 million trees within its Central Maui farm where sugarcane was once harvested.

Mayor Mike Victorino was among those on hand for a celebration of citrus plants — lime, lemon, tangelo, mandarin and grapefruit — along with coffee, avocado, papaya and even windbreak plants like panax, hau and milo. The 1 millionth plant was ulu, a type of breadfruit and staple food crop in the greater Pacific.

In the meantime, the nonprofit ReTree Hawaii, also known as La Hooulu Paemoku, was formed three years ago to educate people about the climate crisis and to encourage the planting of trees to help mitigate against it.

That goal shifted into high gear throughout November, where plantings were planned on all islands except for Niihau. It was the second year in a row that ReTree Hawaii had spearheaded such a campaign.

“People are more aware of the climate crisis and that something needs to be done,” chief organizer Rob Weltman told me, adding that ReTree relies on government grants-in-aid for its work.

He said that the Covid-19 crisis has had the unexpected benefit of getting more folks to garden at home: “They have the satisfaction of planting something and seeing it grow.”

Dan Dinell, president of Trees for Honolulu’s Future, welcomes the increased focus on trees but cautions against getting too optimistic.

“I think the challenge at the government level is that we still have departments working at cross purposes,” he told me. “And what I mean by that is that there might be a tree removal by Department X and a tree planting by Department Y.”

His point is that, taken in isolation, the actions may make sense but effectively amount to canceling each other out.

Dinell — whose nonprofit counts among its board of directors University of Hawaii Manoa arborist Roxanne Adams, former City Councilwoman Ann Kobayashi and executive director of The Outdoor Circle Winston Welch — also advises that the selection and siting of the tree be seen as just a first step.

“Once that is done, the really essential follow through is the care of the tree — and that is an ongoing challenge,” he said. “It’s pretty easy to get people excited to plant but less so to do the weeding and pruning that a tree needs to grow up and be safe and healthy and long-lasting.” 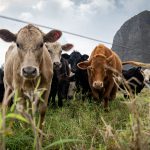 Hawaii Is Beefing Up Its Potential To Produce More Meat Locally

Important that reforestation happen, both urban and rural, for the multitude of benefits noted.  All the more important when we see the terrible forest management practices in places like Southeast Asia, Brazil, and Canada.  If you haven't seen it before, look up the Tree Man of India... incredible story.

Man pumping CO2 back into the atmosphere - has helped to green the earth even pretty much ending famine in India for example - according to the data.  No surprising.  According to a Canadian university study today's plants peak health at 1,000 to 2,000 ppm, we're still well below that.  The earth's has been in a very long running CO2 starvation event until we reversed it.

When I come over from Kauai, I love seeing the trees in Hono and it reduces my stress of seeing all that traffic, all those high rises, apartments, houses, and businesses.