Denby Fawcett: Is Everything Fair Game Now For Vandals In Chinatown?

Broken windows at the police station and many Chinatown businesses signal increasing disorder in the historic downtown neighborhood. 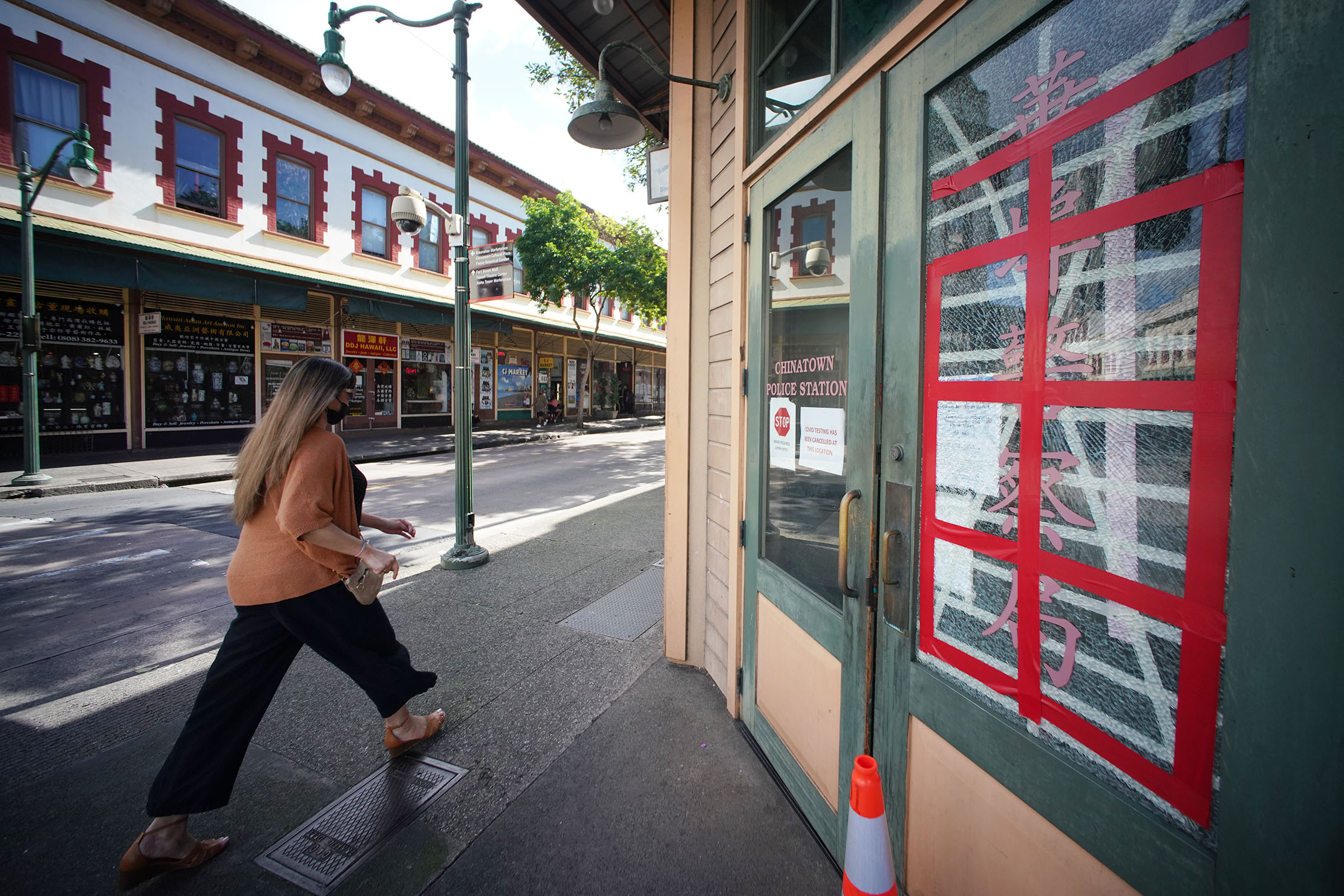 “There are too many broken windows,” says Chinatown boutique owner Roberta Oaks.

Oaks lists the shops and service providers in her immediate Nuuanu Street neighborhood where suspected vandals have shattered glass windows in the last two months.

The most surprising example I saw when walking through Chinatown Wednesday was the vandalized window on the front door of the Honolulu Police Department’s Chinatown substation.

HPD’s shattered window  — now held together with strips of red tape — is a highly visible symbol of the disorder that continues to distress residents living or working in Chinatown.

Criminologist Janet Davidson — a Chaminade University professor and a Chinatown resident — says the police station’s shattered front window shows how lawless it has become. She says it sends a powerful message to others who might be watching that everything is fair game.

And if you are a Chinatown business owner you have to wonder: when someone is brazen or crazy enough to break the window of the police station, could your storefront be next?

A 40-year-old woman was arrested at the scene at 8:40 p.m. on January 8 and charged with criminal property damage for allegedly shattering the police station’s window, according to acting HPD Maj. Calvin Sung.

In an email, Sung says the woman received medical treatment for cuts to her hand and that no police officers were injured.

According to Sung, the Chinatown police substation has been vandalized before. He says last year culprits spray-painted the outside walls of the station with graffiti.

Property damage in Chinatown has increased 20% in the last two years, Sung says, with 443 cases of criminal property damage, including windows and store fronts, in the Downtown-Chinatown area. That’s up from 2020, when there were 371 cases.

But he says the number of cases in 2020 was atypically low due to Covid-19 emergency restrictions that kept people out of public spaces.

Looking at the shattered glass panel at the police station made me think of the broken windows theory  popular with law enforcement officials in the 1980’s and 1990’s.

The theory says visible signs of lawlessness — such as untended piles of garbage, graffiti and vandalized windows — create an environment of disorder and neglect that encourages more crime. It suggests that if the low level criminals are arrested and convicted, and visual order is restored, crime will be reduced.

But recently, critics have discredited the broken windows theory, pointing to overzealous police who have misused it to arrest disproportionate numbers of poor people and minorities for low-level crimes with no resulting decrease in overall crime.

Maybe the visual disorder in Chinatown is just that, disorder, instead of a prompter to more serious crimes. But it is a frustrating and terrible reality for many Chinatown businesses.

Chad Hiyakumoto, owner of APB Skateshop on the corner of  River and North King streets, says the windows of his skateboard shop have been broken by vandals more than 12 times since March 29, 2019.

Currently six windows are broken and have not been repaired by the landlord. Some have remained broken for more than a year. A few of the windows have been busted multiple times by different culprits.

Most of the attacks recorded on his security tape appear to be by angry people who have no intention of entering the store, he says. But on three occasions people have managed to break in to steal merchandise. Police have arrested only two of the thieves.

“I am at my wit’s end. I don’t know what to do,” Hiyakumoto said in a phone call Sunday.

“We need help. Something needs to be done. We are getting broken into. We are getting windows smashed. It is making owning a business down here very difficult. This is the worst I have ever seen it.”

Hiyakumoto has been in the skateboard business in Chinatown for 20 years.

The store has been attacked two times so far this month. On January 4 the store’s security camera videotaped a well-dressed man drinking a beverage then going around the corner to wait until nobody was around and coming back with a hammer to break the window.

The most recent attack was on Friday with security tape showing a young man with a machete in the early morning hours smashing one of the store windows.

Vandals have used everything from skateboards to fire extinguishers to wrenches to break the glass.

Hiyakumoto says when the window-breaking started three years ago the property owner repaired the damaged windows. But after so many different glass breaks, she found it cheaper to cover up the damaged windows with plywood while seeking a more permanent solution.

The building’s property manager, Robert Cooper, said instead of continually trying to repair the glass, they are looking for a protective window covering such as metal bars to try to stop the vandalism for good.

Common signs of disorder in Chinatown are the dirty streets, graffiti and broken windows. There is also the sad sight of stores that have not yet been attacked but are proactively boarded up with plywood for protection in case vandals target them next.

Cindy Yokoyama says a vandal whacked a metal bar through the front window of her jewelry store on Nov. 20. The store, Ginger13 at 22 S. Pauahi St., is now partially covered with plywood while she waits for replacement glass that’s delayed by the current shipping backlog on the West Coast.

Yokoyama says replacement glass and its installation will cost about $7,000. She says police officers came when the window was broken but she has not heard from them since.

“It’s terrible. With our businesses getting attacked more has to be done,” she said.

Customers can enter Yokoyama’s store now but only after ringing a buzzer on the front door to be let in.

The same day Yokoyama’s store was vandalized, Mark Merriam, the owner of AlohaGraphics on Hotel Street, says his business was hit by a rock-throwing vandal whom he chased to the Chinatown police substation where officers arrested him.

Court records show the suspect, Clinton Hill, was found guilty of criminal property damage in December and is scheduled to be back in court for a restitution hearing February 3.

But business owner Merriam says he doesn’t expect to get any restitution because Hill appears to have no means of support.

“We need help. Something needs to be done.” — APB Skateshop owner Chad Hiyakumoto

Merriam has been in business in Chinatown for 25 years and says has no plans to leave despite having his windows broken four different times in the last two years.

He says an empty commercial space next to him that used to be a Love’s Bakery outlet also was vandalized in November and another vacant space where Walgreen’s used to be on Hotel Street had its window cracked.

“I want Chinatown to be a vibrant place with not as many vacant properties and more people coming to walk around again. If more people were out shopping and eating in restaurants it would make it difficult for vandals to break windows,” he said.

But with the uncertainties of the pandemic, not many entrepreneurs are eagerly jumping in to start new businesses in Chinatown, especially in its current degraded condition.

Shay Haas, the co-owner of Black Cat Tattoo on Hotel and Nuuanu, says the shop’s window was maliciously smashed in November. The large glass pane is not fixed yet and glistens in the sun looking like a spider web with multiple lines of cracked glass.

Tattoo artist Haas says it is frustrating because it’s going to cost $2,500 to replace the window and yet the man who broke the glass is still out on the street.

HomeStreet’s Chinatown branch also had two of its front  windows on Hotel Street smashed. They are sealed off by plywood.

I guess the most worrisome part of this wave of vandalism is that the trashing of Chinatown has persisted for so long that some residents and government officials seem to be looking at the disorder as normal.

“Chinatown is such a rich historic venue. It’s a shame to see it become a neglected community,” says criminologist Davidson. 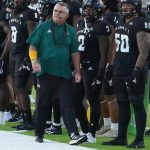 "If more people were out shopping and eating in restaurants, it would make it difficult for vandals to be breaking windows." This is known as' Eyes on the street", and it works in other cities. With residential units above commercial spaces below catering to their residents daily needs, people can easily walk a couple of blocks to pick up daily necessities. Fresh baked breakfast items, fresh vegetables every day, and so on. When redesigning Downtown, this style of living was proposed as a safer way to design the urban core. Instead, Honolulu created this vandal problem, and needs police to squash the chaos. It's another variant of the homeless sweeps---taking a problem that was created, and not solving it, but continually chasing your tail "trying" to get a handle on it. Creating Eyes on the Street is a solution to this vandalism problem as well as the housing problem. Will Hawaii proactively move to solve this crisis, or continue to chase its tail?

The River of life mission on Pauahi st is unfortunately a beacon for chronic alcoholics/drug users, so it basically becomes a catalyst for a very painful numbers game of how many vagrants Chinatown will absorb.

Ever consider the natural balance, the flow of all there is, good and bad, working cosmically together, one part fills the next? What happens when one part is removed? In nature, as we see with climate change where the over flow ends up is unknowable until it happens. What happened two years ago ? Was there a resource taken away from the poorest in our community? A resource that unknown to everyone else fed and provided for them, gave them independence. You know these people who we consider have no initiative. They are independent as can. Surviving in an alternate economy that's existed forever. We stopped putting our bulky rubbish out on the street. Remember these are people who have no money. Consider the value of that resource to the poor. Consider the value of the poor using up our lazy discards in this time of climate change, a laissez faire gov't program, doesn't cost a dime.Those piles had more worth than we knew to those no one thinks about. How are they to provide for themselves. They have to steal, rob and suffer trying to get what they need, not even knowing why. We complain about criminals yet we make them. Go figure.