The pandemic has kept the people’s house off-limits to much of the public for almost two years. That must end. 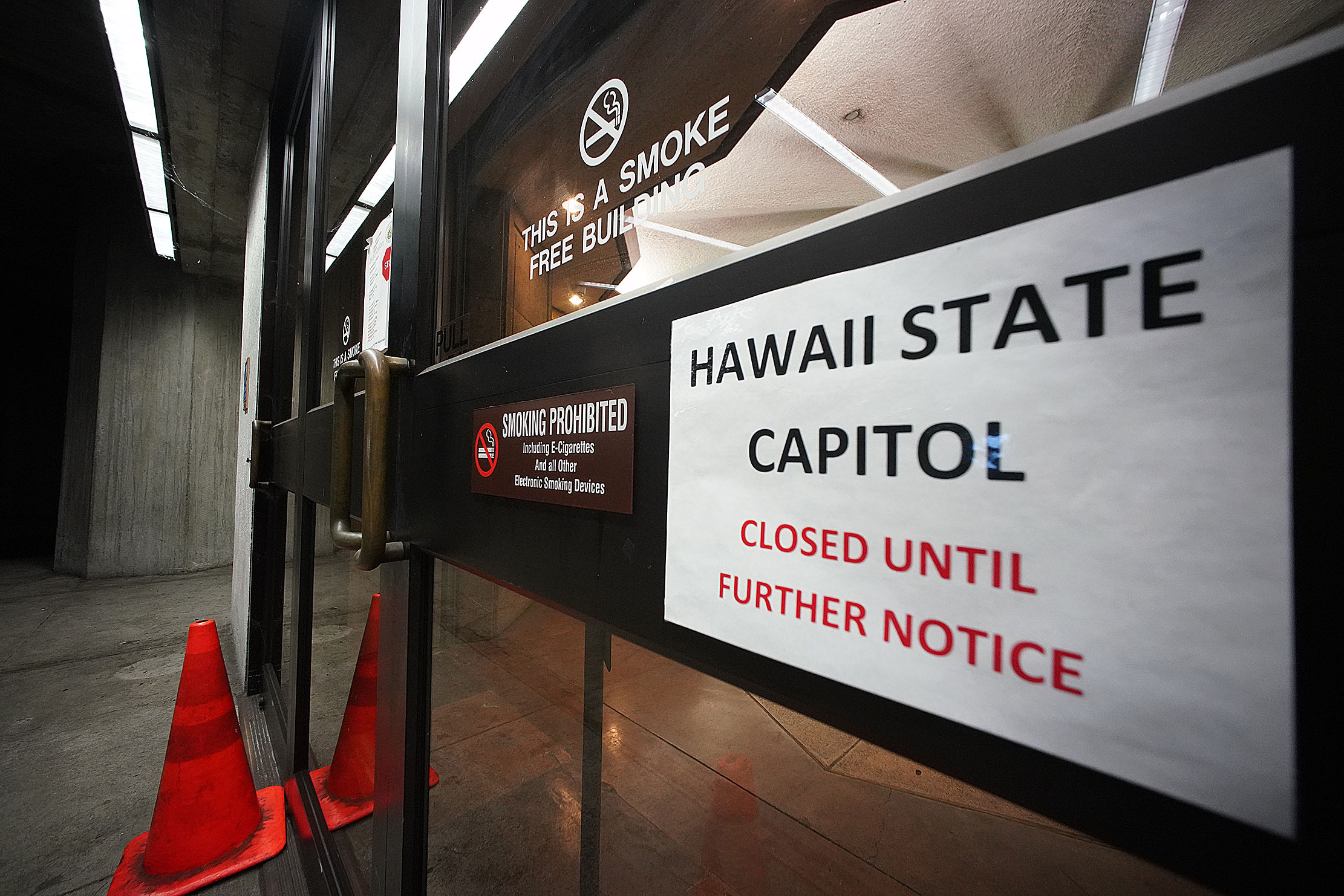 The Hawaii Legislature began holding informational briefings last week, hearing about the latest economic forecasts, budget requests from state agencies, proposed legislation and the woes of the University of Hawaii football team and its coach.

If January 2022 was like most Januaries in Hawaii, the State Capitol on Beretania Street in Honolulu would be bustling with visitors — including the media — to watch in person as elected representatives deliberate over laws, taxes, policies, politics and more. Opening day is Jan. 19, and the governor’s state of the state address is five days later.

But, ever since March 19, 2020, when state Sen. Clarence Nishihara tested positive for Covid-19 after a return to the islands from Las Vegas, the Capitol has been largely off-limits to the public and media — even as Capitol denizens continued doing the people’s business inside the people’s building.

On Wednesday Senate and House leaders said the closure would continue indefinitely due to the recent rise in Covid cases.

The pandemic remains a serious public health and safety crisis, but, after almost two years of living under a coronavirus cloud, Hawaii has managed to return to a degree of normalcy. Social distancing protocols, testing and vaccinations have allowed the public to again enjoy restaurants, bars, theaters, stores and transportation.

Such is not the case at the Hawaii State Capitol, where public notices for public hearings advise interested citizens to watch them via livestream. The broadcasts can easily be accessed online, and the Legislature is to be commended for this new level of openness. In the pre-pandemic period, not all hearings and briefings were broadcast or archived for future viewing.

But the livestreaming also underscores the frustration for those watching them. We can see our lawmakers and their staff seated physically apart and donning masks and sometimes face shields. The same goes for people invited to testify, unless they are speaking remotely.

While no place is immune, the State Capitol adheres to safety protocols to prevent the spread of Covid. Proof of vaccination or a recent negative test is required to enter the building. Face masks must be worn at all times, and proper social distancing must be maintained while indoors.

Some of the advice from Capitol security is just good sense: “If you have a cold, runny nose, sore throat, muscle aches or fever, please do not come into the facility,” a sign reads on the glass-door entrance in the basement. “Contact a medical facility or your physician.”

The Room Where It Happened

If the Capitol, which by its very design is partly an open-air facility, can be made safe for legislators, employees and invited guests, why can’t others attend?

Watching a streamed hearing is not the same as being in the conference rooms, seeing who else is in the room and who is talking to whom, seeing and hearing who is engaged in conversation in the hallways and by the railings overlooking the Rotunda, and observing who is entering the offices of senators and representatives or headed to the fifth floor to visit the governor’s administration.

The public and media also are not able to visit the invaluable Public Access Room on the fourth floor or the Legislative Reference Bureau library on the chamber level, even though they too are open and staffed. You can reach them by phone, email and social media, however.

The frustration over a double standard on who gets in and who does not is only compounded by the fact that some Hawaii lawmakers hosted in-person meetings with lobbyists, business and community leaders and government officials just days after the Capitol was shuttered. It’s government by selective appointment, and it has continued.

And in case you are wondering about the tall wooden barriers that nearly circle the building — the Rotunda is still open on both the Father Damien and Queen Liliuokalani statue sides — they were initially erected to protect the public from the $3.15 million construction on damaged metal “tiles” that are suspended above the reflecting pools from the ground and second floors.

But Tony Benabese, special assistant to the comptroller for the Department of Accounting and General Services, said in an email last week that the work was completed Dec. 17.

“DAGS was requested by the Legislature to keep the barriers in place,” Benabese said. “The barriers continue to provide protection for the drained pool with the added benefit of increased security for the State Capitol.”

Security is important, especially after the Jan. 6, 2021, insurrection at the U.S. Capitol. Rightly so, the Department of Public Safety has an office and sheriff’s deputies working from the chamber level.

But it could give the appearance that the high barriers are there to discourage the public from going to the Capitol, almost as if to protect the lawmakers from the people who put them in office.

This is wrong, and many recognize it as such.

Sandy Ma, executive director of the pro-democracy group Common Cause Hawaii, noted that restrictions have been lifted for commercial facilities with proper safety measures in place. Public schools also have resumed in-person instruction despite concerns about the recent omicron-driven spike.

“While Common Cause Hawaii understands the need for public safety during these pandemic times, the public must be able to access the seat of government in our democratic society,” Ma said. “On Oahu the only restriction to curb Covid-19 transmission is a 50% capacity limit for indoor events over 1,000 people.”

“It seems that if otherwise life may return to normal, with even our keiki back in school, our elected leaders should be able to allow the public to participate in our democracy in person,” she added. “It would be our choice if we decided to participate remotely, which must be an option provided to the public upon reopening of the Capitol.”

The Oregon And California Models

Other states have reopened their legislative bodies.

Oregon, a state of 4.2 million people with a Capitol in Salem where 30 senators and 60 representatives convene, also closed its Capitol to the public in March 2020, implemented protocols and went virtual with meetings.

But a Capitol operations safety plan released in January 2021 was led by “a core team of nonpartisan Capitol staff, which included members of the Oregon Capitol Club and the Capitol Press Association, as well as a bipartisan group of legislators and staff members. The goals of the core team were to develop a plan that complies with public health directives and guidelines while maximizing opportunities for public engagement.”

While access to the Capitol remained restricted, members of the press were welcomed with only a few limitations while in House and Senate chambers. By July the Oregon Capitol expanded entry to include the public.

Senate President Peter Courtney and House Speaker Tina Kotek said in a press release that they were “excited to expand entry to the Capitol to include members of the public.”

Johnmartin Sherman-Lewis, communications director for the Senate President’s Office, said new details will be released this month on how the session will operate when it opens Feb. 1.

In California, one of the states hardest hit by Covid with a population of 39 million, the California State Assembly and the State Capitol in Sacramento are currently open to the public with restrictions in place.

Members of the press who wish to access the 80-member Assembly chamber must show proof of a negative Covid-19 test in order to be admitted, said Katie Talbot, deputy director of communications for Assembly Speaker Anthony Rendon.

Talbot said that the Assembly went on legislative recess during portions of the 2020 session in response to the pandemic. And the California Capitol was closed to the public for tours, sightseeing and other non-legislative business from March 2020 to June 2021.

However, “throughout the pandemic, any Assembly legislative proceedings such as floor session and committee hearings have remained open to the public, with Covid-19 safety protocols in place to ensure social distancing,” she said via email.

Niesha Fritz, director of communications for the California Senate President Pro Tempore Toni Atkins, confirmed the same applies to her chamber. She emailed a statement attributed to the Office of the Secretary of the 40-member Senate.

Hawaii House Speaker Scott Saiki and Senate President Ron Kouchi should move to reopen the Capitol as soon as feasible. They should also tear down the barrier walls.

And they might well want to consider what Gov. John A. Burns, at the dedication of the Capitol on March 15, 1969, had to say:

“It is by means of the striking architecture of this new structure that Hawaii cries out to the nations of the Pacific and of the world, this message: We welcome all visitors to our island home. We invite all to watch our legislative deliberations, to study our administrative affairs, to see the examples of racial brotherhood in our rich cultures … E komo mai! Come in! The house is yours!” 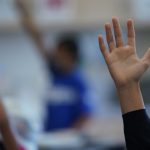 6,000 new cases today. This op-Ed is looking more and more out of touch every day.And again I say itâs not the everyday members of the public thatâs spending their days at the Capitol. Itâs a small group of people that are really plugged in.

The legislature has greatly expanded the public's access to observe proceedings and testify at hearings.  Due to technological advances this can happen remotely and in real time via platforms such as youtube and zoom. In-person communication is nice but to just open the building so that anyone, including visitors from the cruise ship parked at Aloha Tower, can wander around is not advisable. In addition to the legislators, there are hundreds of support staff who often are the first to interact with whomever walks in the door and the impact on staff should be considered.

If politician don't want to open building to public, tear it down.  Keep the basement and put in  40' trailers for politicians to work in or since they like open air just put up party tents in the basement for them.