From Fishermen To Rugby Players, Climate Change Has Become A Fact Of Life In Fiji - Honolulu Civil Beat 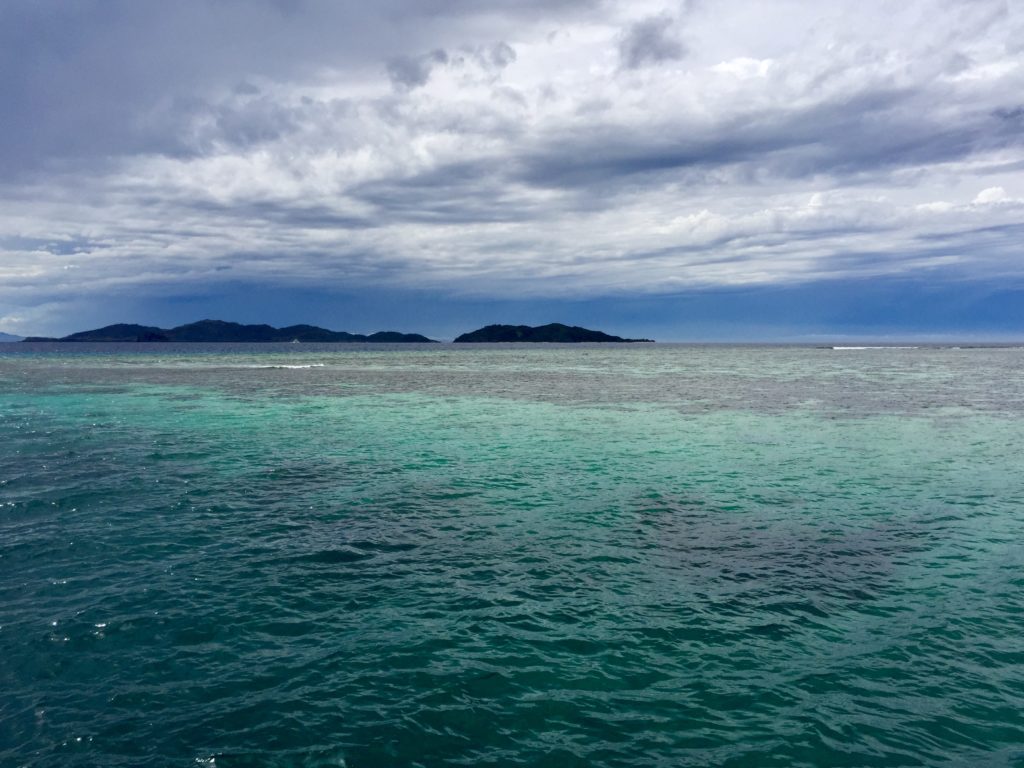 From Fishermen To Rugby Players, Climate Change Has Become A Fact Of Life In Fiji

The Pacific island nation was the first to relocate a community due to the effects of a warming planet. The struggle continues as families learn to adapt.

By Next Generation Radio, Claire Caulfield / February 17, 2022
Scroll to Read

When Shahadat Ali was learning how to fish, he was taught to put the smaller fish back into the ocean. But the quality, size and amount of fish have decreased so dramatically that he now has to keep every fish that swims into his net.

“Times are hard — it’s a struggle,” said Ali, who lives on the outskirts of Nasinu, the most populous town on the island of Viti Levu in Fiji.

Ali’s 72-year-old uncle, Iqbal Shah, has been fishing since he was a teenager and has seen the ocean he loves change drastically over his lifetime.

Ali and Shaw are just two of the approximately 1 million people in Fiji struggling to make a living, maintain traditions and fight injustice in an ever-warming world.

After years of flooding and coastal erosion, the village of Vunidogoloa completely relocated in 2014. It was the first community in the Pacific to relocate due to climate change. Three other villages in Fiji have followed suit, and more than 80 coastal communities are planning to move to higher ground in the coming years.

The average high temperature in the islands has risen by almost 3 degrees Fahrenheit since 1950. Farmland and drinking water aquifers are being tainted by saltwater intrusion and ocean acidification is killing coral reefs that support fisheries.

Viti Levu, Fiji’s most populous island with a population of about 600,000 people, is spending about $52 million per year to combat rising tides. Stronger El Niño patterns trigger more frequent and intense tropical cyclones, which bring death, destruction and disease.

“Climate change is actually an existential crisis for a lot of small islands because it’s leading to, in some places, a complete loss of land and a cultural loss as well,” said Amanda Bertana, an environmental sociologist with extensive experience in Fiji.

Bertana said it’s important to understand that the Fijian word for land, vanua, encompasses one’s relationship to the land and pays homage to the fact that ancestors are buried in the land.

“It’s about this relationship you have with the past and to lose that … it’s traumatizing,” she said.

Adding to the trauma is the injustice of climate change. Fiji is one of the smallest contributors to global carbon emissions, and yet, according to the United Nations, it faces some of the most devastating consequences.

Laisiasa Waqamoce’s farm was completely flooded in January when a Category 1 cyclone hit the islands.

About half of Fiji’s population practices some sort of small-scale agriculture, from pure subsistence farming to backyard gardening.

Waqamoce and his wife grow cassava, taro, eggplant and cabbage on a 3-acre farm in Vuniniudrovu, in central Fiji. They sell their vegetables on the roadside of a neighboring town and they usually make about $90 a week.

But the flooding causes them to to lose out on as much as $20 per week.

“We cannot be transporting crops by raft every time,” he said.

Listen“Sometimes, it makes me not want to continue with schooling again, because it’s really messed up my progress.” -Elia Komaitoga

For people like 22-year-old Elia Komaitoga, who are trying to balance both farming and higher education, any setback is frustrating.

Komaitoga is working toward a degree at the University of the South Pacific, where he’s majoring in economics and human resource management. He lives about an hour away and helps his family grow taro and cassava.

The recent cyclone in January took down power lines and flooded roads. One person died and more than 4,000 people had to evacuate their homes. The stress and added work on the farm really set Komaitoga back.

“When you are in school and you’re really focused, you’re progressing well with readings and assignments and quizzes and activities and all of a sudden, some really big cyclone comes and then you’re stuck at home for a few days and it really, really stunts your progress,” he said.

The 2022 cyclone reminded Komaitoga of 2016, when Cyclone Winston made landfall. It was the most intense tropical cyclone on record in the southern hemisphere, and killed at least 44 people across the region.

The Fijian word for cyclone, na cagilaba, means “the wind that kills.” For Sunia Digova Lesivou, this isn’t theoretical.

"Most of the nights when I slept… I used to dream about what happened. Even now, after 48 (years) sometimes I can still feel it."
— Sunia Digova Lesivou

When he was 11 years old, Sunia Digova Lesivou survived a cyclone that killed his 3-year-old brother. The recent cyclone that hit Fiji in January reminds him that climate change will bring even stronger storms.

Lesivou was 11 years old in 1973 when a cyclone hit Fiji. He was on a boat with his mother and 3-year-old brother at the time, traveling to the capital Suva so Lesivou could attend school.

He remembers the sky going dark and an eerie quiet overtaking everything. Then, the rain and the wind started. In the storm, their wooden boat split in half, and Lesivou was knocked unconscious.

When he came to, he was pinned underneath the boat and had to struggle to swim to the surface. He swam alone for hours, using a kerosene drum, then a sack of coconuts as a flotation device, before seeing his mother.

“After about three hours, I met my mother who was swimming and carrying my dead brother,” he said. “She was trying her best to carry him, to bury him on land rather than leaving the body to be buried in the sea.”

Every time there’s a cyclone, Lesivou relives these memories. And the former teacher is saddened to think about the next generation experiencing similar traumas as climate change brings more intense storms to the islands.

Maraia Manafau’s family has a close relationship with the fisheries of Fiji. The 24-year-old is descended from a lineage known as “people of the water,” originating from the outer islands. Her parents both sold fish, her uncle was a deep-sea diver and she’s been selling fish in Suva, Fiji for over a decade.

Her young son wants to carry on the family tradition, which worries Manafau because her family has seen firsthand how climate change is impacting the local fish population.

“Fish nowadays are getting smaller,” she said. “So whatever he wants in life, we’ll just have to prepare for that.”

Viliame Tunidau also thinks about what life will be like in Fiji for the next generation.

The 23-year-old grew up playing rugby with his brothers and cooling off in the Sigatoka river.

He’s still playing rugby, in fact he’s a professional and plays for the Coastline Roos, but that same river is unrecognizable.

“Due to flooding and raining … now it’s deep and it’s muddy,” he said. “There has been a big change in our environment.”

Climate change is also taking a toll on Tunidau’s health as he struggles to train in the ever-rising temperatures.

“I always get dehydrated,” he said. “I almost vomited during training.”

When it does rain, the storms are far more intense and his team has had to cancel many practices and games due to floods and storms. It’s frustrating because Tunidau has worked hard to make a professional team and he doesn’t know how many more seasons he can play.

But above all, he’s worried about the next generation.

“I feel sad and disappointed seeing kids nowadays, they don’t get to experience the things we had when we were kids like spending the days outdoors, going swimming, enjoying the day out in the sun, playing touch rugby,” he said. “Now they have to stay indoors because of the climate change.”

Edward Rakaseta can relate. His happiest childhood memories are at his mother’s family home in Rakiraki, a coastal district on the island of Viti Levu. He remembers playing on the beach with his cousins and eating lolo buns on the porch.

“It’s the type of house where as soon as you set foot through the main door, everyone knows you’re home,” the 25-year-old science student at the University of the South Pacific said.

But the landscape is already shifting as the sea level rises and the coast erodes.

“There were movements in the area that changed and morphed a lot of the marina into something that was different from what we remember as being home,” he said. “At one point, we saw that the rock formation had actually crumbled down and fallen into the sea.”

It’s worrying because generations of his mother’s family are buried on the property. If they’re forced to move, he’ll lose that physical connection to his family.

“It’s especially sad because I wouldn’t be able to show my kids where their grandma came from,” he said. “That type of tie is something important to me and to a lot of people in the country.”

Despite the pain and anxiety, people in Fiji aren’t giving up hope.

“There is only one thing climate change has taught me – we should not give up, we just have to move forward,” said Laisiasa Waqamoce, the vegetable farmer in Vuniniudrovu.

Elia Komaitoga, the student whose education was delayed by the recent cyclone, said that working together to rebuild farms after strong storms and talking about the impact of climate change on their lives has brought his family closer together.

“The effects, in my opinion, will make my family and myself stronger, to be smarter, to adapt, adapt faster and much better to the current changing weather conditions,” he said.

The project was directed by NextGenRadio and sponsored by the University of the South Pacific, the East-West Center and the Institute for War & Peace Reporting, with in-kind support from Honolulu Civil Beat, the Honolulu Star-Advertiser and KUAM in Guam.