The emergency exemption allowing sidewalk dining has expired but the city wants to bring it back and make it permanent. 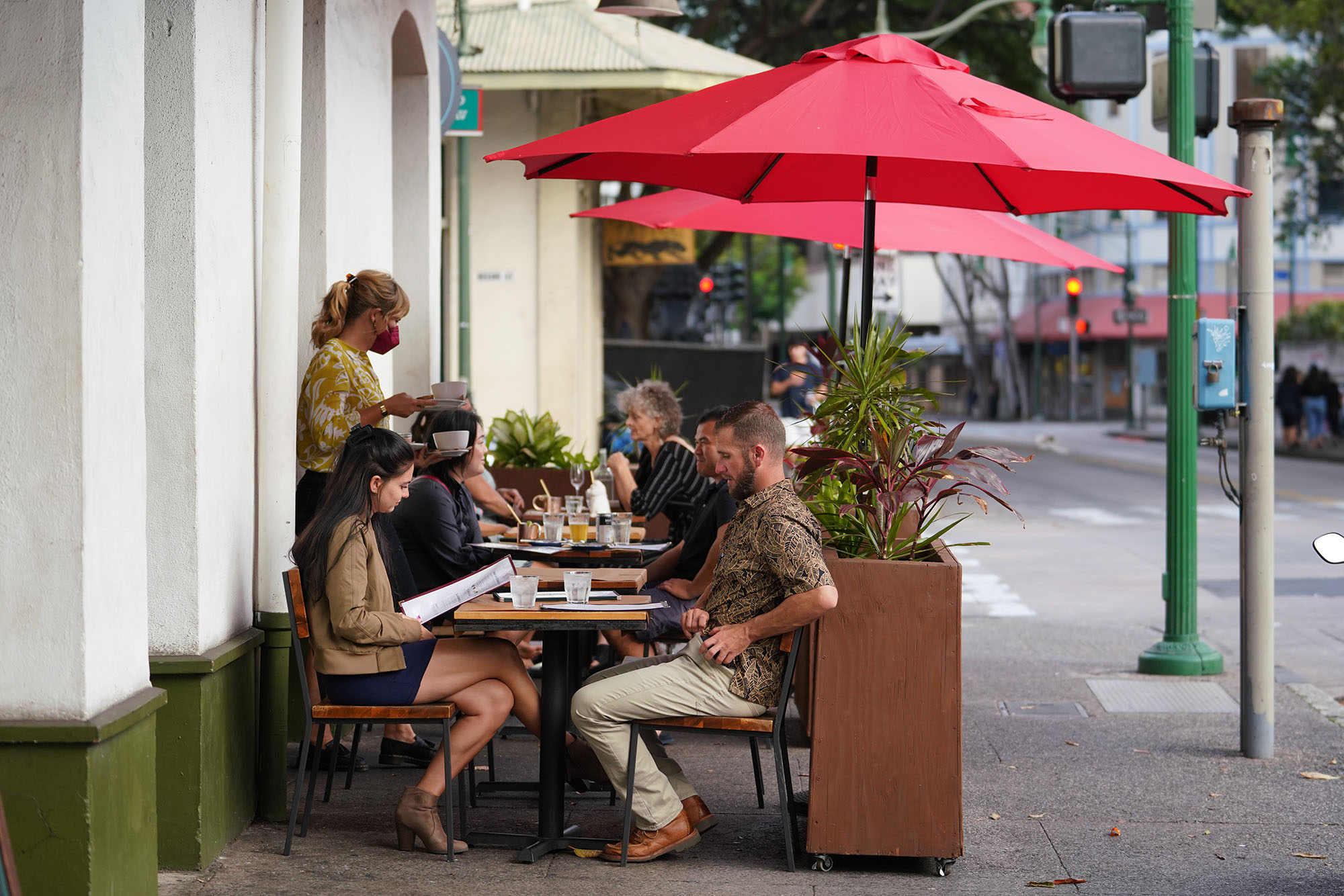 One of the few good things to happen during the pandemic was Honolulu’s suspension of normal rules to allow restaurants to place tables on public sidewalks.

Then-Mayor Kirk Caldwell granted the exemption in an emergency order in May 2020.

Like many others, I have been grateful for the new opportunities to dine outside in the same fun way we have for many years at sidewalk cafes in Europe and other U.S. cities. Hawaii with its yearlong balmy climate is a perfect place for street-side dining.

I wish sidewalk service could be a permanent feature but the emergency exemption expired on March 5, when Mayor Rick Blangiardi terminated all the provisions in the Safe Oahu Response Plan including the temporary permission for sidewalk dining.

Blangiardi says he is in strong support of allowing sidewalk food and drink service to continue.

“We are going to put our sights on making sure this happens,” he said. “Having restaurants succeed is an important part of our recovery from the pandemic. Dining out is not just for tourists but it is also part of the fabric of local life.”

Blangiardi says to allow sidewalk dining in the future will require law and rule changes but he will do what’s needed to get it done.

The end of the exemption seemed to take many restaurateurs and city officials by surprise.

Restaurant owner Robert Yamazaki says he was taken aback when two Honolulu Liquor Commission inspectors visited his Yakitori Hachibei restaurant on North Hotel Street at 9:30 p.m. on March 17 to issue an official warning, saying he was in violation of the law prohibiting the consumption of alcohol on public property.

Yamazaki said there was no warning from the city or the liquor commission to let him and other restaurant owners know the emergency exemption relating to restaurants had expired.

He said when he called the liquor commission, the person with whom he spoke seemed unaware of the change.

Chuck Bussler, of the nearby restaurant Fete, said he also was caught off guard when Yamazaki told him what had happened.

Bussler and his wife Robbyne Maii are co-owners of Fete, on the corner of Nuuanu and Hotel Streets. She is a finalist this year for the James Beard Award for best chef, which in the cooking world is like getting nominated for an Oscar.

Bussler says Fete’s six outside tables have made some customers feel safe and others feel happy to be able to enjoy the Chinatown street ambience. And the income also helped Bussler and his wife survive the financial uncertainty of the pandemic.

Yamazaki says restaurants should have been given a heads up.

“There was no chance for restaurants to prepare, no time to allow us to adjust in order to comply,” Yamazaki said. “It is difficult to stop service immediately. I already have advanced reservations for outdoor tables going far forward.”

Yamazaki hopes the city will find a way to make it possible for sidewalk dining to become permanent, but if it has to end, he says restaurants should be given a four-month grace period to phase out their sidewalk operations.

Honolulu Managing Director Mike Formby wrote in a text, “With great weather year round, we simply should find a way to give restaurants/patrons this option.”

But he says there are many challenges, such as the Americans with Disabilities Act requirements to guarantee access for people with disabilities on existing narrow sidewalks and making sure outdoor tables do not impede pedestrians trying to walk down the sidewalks.

Formby says while the city tries to find a solution, restaurants will have to comply with existing laws on the books, which means restaurant dining will have to stop on public property.

City Planning and Permitting Director Dean Uchida said in a statement: “The DPP and other city agencies will be working with the City Council and the Hawaii Restaurant Association to address current ordinances to make this happen as quickly as we can.”

Liquor Commission Administrator Franklin Don Pacarro Jr. says that 18 restaurants started serving alcohol on public sidewalk tables under the emergency exemption. But only 11 of them applied to the liquor commission for the required permit application to do it.

He says the restaurants still serving alcohol on the sidewalks are in violation of city ordinances and a state law that prohibits alcohol consumption on public property.

For the time being, Pacarro says the liquor commission will issue warnings rather than citations but after the restaurants have been put on legal notice, they can expect to be cited if they continue to provide alcohol service at sidewalk tables.

Honolulu City Council member Carol Fukunaga says she has been urging the city for almost a year to come up with a fix to make sidewalk dining permanent.

In the meantime, she thinks the city should offer a short term solution to allow the sidewalk food and drink operations to continue while the various city departments, council members and state lawmakers enact laws and make rule changes to allow the restaurants to serve sidewalk meals permanently.

Fukunaga says restaurants should not be penalized just when they are trying to get their feet back on the ground and are additionally burdened with staffing shortages, supply problems and some customers still worried about catching the virus.

“This comes at a most unfortunate time,” she wrote.

Ave Kwok, vice chairman of the Hawaii Restaurant Association, said, “Letʻs not close sidewalk dining now when the virus is still here with a new variant taking hold here and still other variants on the horizon.”

Any big change in government regulation can take a long time but allowing sidewalk dining to continue is a change that is worth pursuing. 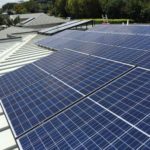 The 2 restaurants in this article are possibly not the best example of what outdoor dining can/should be, primarily because of the width of the sidewalk and area that they are in. More power to Fete and Yakitori for being able to pull this off with the amount of crazy, riff raff and homeless in the area, that you would think we be disruptive to a dining experience. A more apropos venue would be in Kaka'ako where new construction has allowed for very wide sidewalks, cleaner streets and available space. We need more outdoor dining. It's part of unique experience found all over Europe and in most US cities. If Hawaii wants to have that experience the city will not only need to allow it, but put in the infrastructure to make it happen.

One place that outdoor dining could be enhanced is Waikiki, where we could permanently close one lane of Kalakaua, do some serious landscaping, and create a long mall for dining. Tourists would love it, and this would bring locals to the game also. There is always lip service about enhancing the visitor experience, but what has ever been done?Granted there are not many lanes for traffic we can convert in this crowded city, but it would work on Kalakaua, as it has all over the world. There is always initial opposition from the motor vehicle crowd but when implemented, these conversions always work and then we wonder, why didn't we do this years ago?

I think the no outdoor dining thing went back to Fasi's regime because I remember Bart Cahoon, the owner of Waikiki's Buzz's Steakhouse (where Trump Tower is now) wanted to put a lanai in front. Roy Kelly told him to "just do it" and they did. It's a stupid rule. Chart House, Yard House and lots of others have done their best but it's just a crazy old reg that needs a hasty revision. Even restaurants in very cold weather places open up outdoor dining as soon as it's possible. We are very behind the times. Agree that there are loads of of other weird venues that the inspectors could spend their time and effort. Don't harrass the tax paying venues.