The candidate for Hawaii lieutenant governor talks of “a deep respect for those who came before me.” 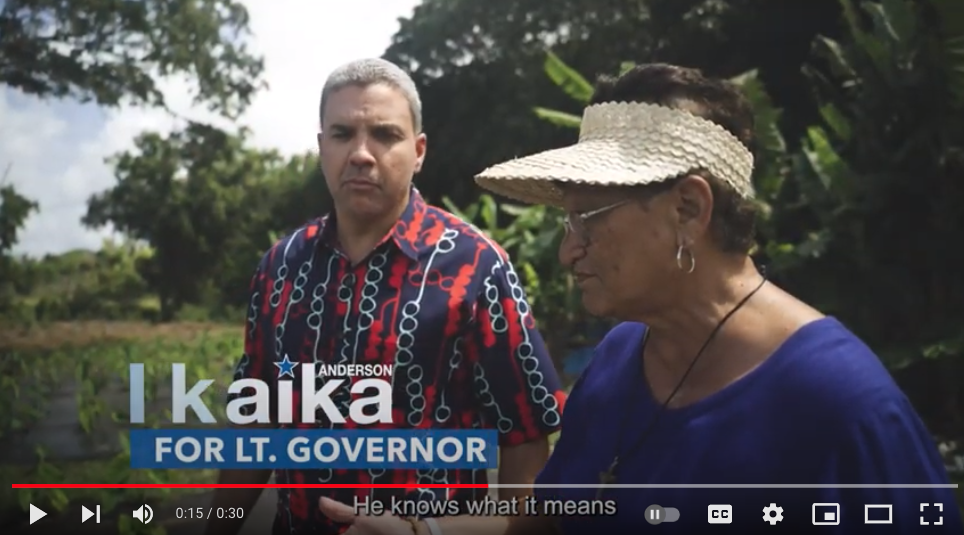 The lieutenant governor candidate’s 30-second spot is titled “Protecting Hawaii,” and it features supporters praising Anderson’s sincerity, his public service, his values and his “good heart.”

While the ad features young and middle-aged people, it is especially focused on older adults. Aunty Helen (no last name) says in the commercial, “He knows what it means to take care of kupunas. I tell everybody that we need to have him as lieutenant governor.”

In a press release late last month introducing the clip, Anderson explained that it aired during the Merrie Monarch Festival, in addition to the TV shows listed above.

“Like a halau to their revered Kumu Hula, I hold the responsibility and honor of the office I seek with a deep respect for those who came before me, mentoring and guiding the path of my journey today,” said Anderson.

It is always smart politics to appeal to kupuna, especially in a state that has a large population of Social Security and Medicare-age residents. Anderson also is the only Native Hawaiian among the top four Democrats running in the Aug. 13 primary.

Ancestry is not necessarily destiny in Hawaii politics, but it can be a factor in a voter’s decision-making. And ohana is central to most everyone in the islands.

Anderson, a Windward Oahu resident, received a lot of media attention when he unexpectedly resigned from his position as Honolulu City Council chairman in September 2020, saying he needed to take care of his grandparents.

A few days later, however, it was revealed that he had been hired part time by Local 630, the plasterers and cement masons union.

Anderson’s final term was up that fall anyway, but some wondered whether he had been less than truthful about his intentions.

But he continues to push the message that he is “a father, caregiver, and public servant” with more than two decades working for the City Council and as a clerk at the Hawaii Legislature. In terms of government service, Anderson rivals opponent Rep. Sylvia Luke, who is in her 10th term at the Legislature.

Anderson’s ad — a good one — will help to distinguish him as Hawaii turns its attention to the approaching primary. But he is playing catchup to Luke, who has run four ads since March, with the most recent extolling her influence as chair of the House Finance Committee.

One of the 30-second TV ads, slugged “Hawaii Restaurant Card,” opens with owners and employees of several local restaurants and bars giving props to Luke for helping distribute 150,000 plastic cards that utilized federal Covid relief funds. The cards generated $52 million that was spent in local establishments, according to the ad.

It’s a compelling clip in that it shows en elected official actually getting something done — albeit with help from D.C.

Luke’s latest ad is titled “The Right Lieutenant Governor,” and it packs a punch from the opening narration: “Sylvia Luke understands that the right lieutenant governor should be a partner to the governor, a link to the Legislature, and a channel to our communities.”

The ad, which will begin airing later this week, shows Luke in action on the House floor and meeting with constituents as a narrator boasts of Luke’s record on housing, public school teachers and technology.

“As our lieutenant governor, she’ll collaborate to put these programs into action,” the narrator intones.

Unsaid is the widely known fact that Lt. Gov. Josh Green and Gov. David Ige do not appear to be partners in much of anything, though Ige tapped Green, who is a medical doctor, to help with Hawaii’s response to the Covid-19 pandemic. Voters like to see a governor and LG work together.

It also plays up Luke’s legislative experience. Ige himself was the Senate Ways and Means chair and a legislative veteran. But since being elevated to the fifth floor offices of the Capitol, his working relationship has not always been smooth with the lawmakers below.

Why are TV ads so important? Because people watch them — in Luke’s case, that includes the restaurant card clip running on Hawaii News Now, “NCIS Los Angeles” and “American Song Contest.”

And that’s why how much money a candidate raises is important, too. Luke led in the fundraising battle earlier this year, followed by Anderson. The next series of campaign finance reports this summer will likely reflect big spending on ad producers and consultants.

The other top Democrats in the LG field are Keith Amemiya, who ran unsuccessfully for Honolulu mayor in 2020 and is best known for his work in high school sports; and Sherry Menor-McNamara, the president and CEO of the Chamber of Commerce Hawaii. Former state Sen. Jill Tokuda is said to be leaving the LG contest to run for Congress.

Amemiya does feature a 16-second spot on his website, but unless you are checking out his website or YouTube, you may not see it. He has in particular made fighting corruption a top campaign theme.

Menor-McNamara has a spot on her website, too. Running 2 minutes in length, it’s a fine introduction to the first-time politician. I did not know she went to public school in Hilo, for example.

She also says it’s time to end “the political bickering” and restore trust as images of the Capitol pass on the screen. But it’s unclear how many people will see it if it isn’t being broadcast into their living rooms. 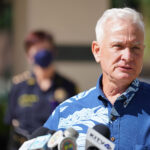 Kirk Caldwell Drops Out Of Race For Hawaii Governor

Hawaii politicians always talk about their how they are local, born and raised here, love the âaina, have large extended families, love to surf, had a hard scramble youthâ¦. Rarely do they actually talk about issues and their stance on those issues. When you go to their websites you see the rehash of the "attributes" listed above but nothing of substance. Sign waving does not mean people are qualified for public office.

I'd vote for Luke for Gov over any of the current candidates.

Just a question someone could answer for me. Is Ikaika related to Andy Anderson who was active in about the 80's.