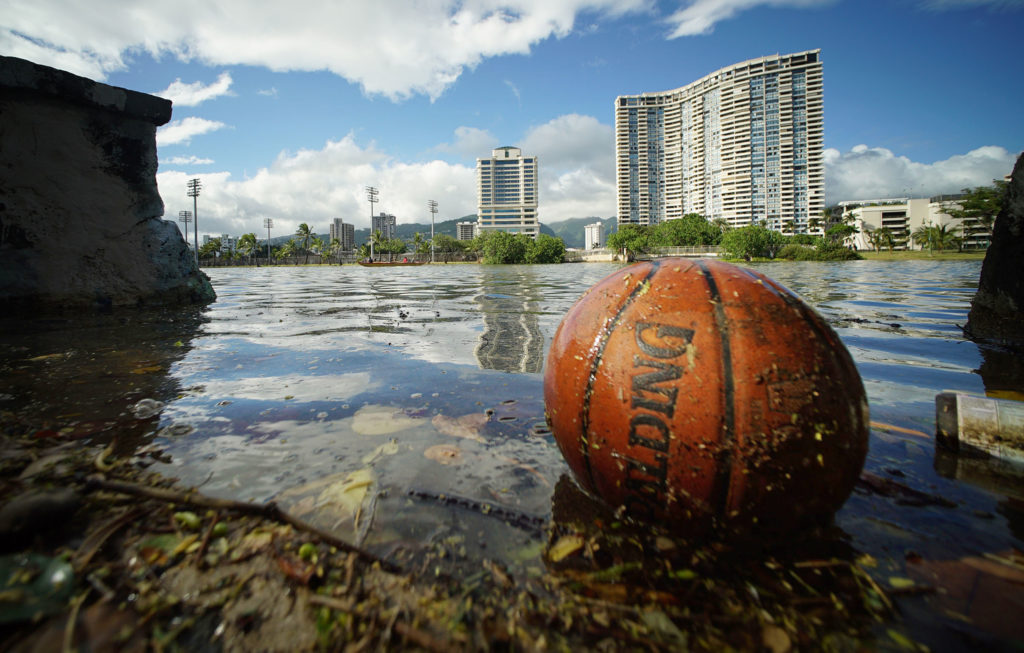 Congress has authorized $345 million to strengthen the aging canal to protect against flooding in Waikiki and nearby neighborhoods.

In the 1920s, developers led by businessman Walter Dillingham carved a 1.5-mile channel across the Waikiki landscape, draining the wetlands that had supported taro farming there for generations.

At the time, the goal was to replace those wetlands with a neighborhood that evoked coastal Southern California.

What ultimately sprung up instead, as chronicled in a 2013 Civil Beat special report, was a dense skyline of towering hotels and condominiums, high-end boutiques, souvenir shops and congested streets. Waikiki took off. Today, the millions of visitors drawn there each year form the cornerstone of the state’s tourism economy.

But the Ala Wai Canal also left one of the island’s most crowded destinations dangerously susceptible to flooding.

The low-lying wetlands that once absorbed the heavy rain waters that rush down Oahu’s steep mountain slopes and out of its eastern valleys are gone.

In their place lies an unfinished man-made canal — one that’s incapable of handling the full force of swift-moving flood waters from the Makiki, Manoa and Palolo watersheds in a severe storm, including a hurricane.

When Hurricane Lane approached, “lucky for us, the rain didn’t transpire here,” said Michael Wyatt, chief of the civil and public works branch at the U.S. Army Corps of Engineers in Honolulu. Nonetheless, “It is notoriously difficult to predict where that rain is actually going to land.”

The Ala Wai was originally supposed to have at least two outlets to the ocean: its existing mouth at the boat harbor and a second one that flowed all the way to Kaimana Beach.

Now, thanks to the Ala Wai, a severe storm could leave much of Waikiki and its surrounding neighborhoods underwater.

“When the water hits that valley floor, for better or for worse, that’s where all our development is,” Wyatt said.

The Corps of Engineers estimates that each year the popular tourist hub, along with its 54,000 residents and nearly 80,000 daily visitors, faces a 1 percent chance of a major flood that would cause $1.14 billion in damage to more than 3,000 structures. In July, Congress dedicated $345 million to fortify the canal and the streams that now feed it.

Local and federal officials hope that funding will finally address a potentially fatal engineering mistake committed almost a century ago. But the project will still take at least four years to complete.

Board of Water Supply crews knew the water was coming and started siphoning water out a reservoir near the base of the valley ahead of time. Despite that work, the waters rose worrisomely close to breaching an earthen dam there — about 1.5 feet shy of the spillway.

Fire department crews eventually doubled BWS’ efforts to drain more water and avert a breach. Had that happened, some 10,000 people in the waters’ path to the harbor would have been evacuated.