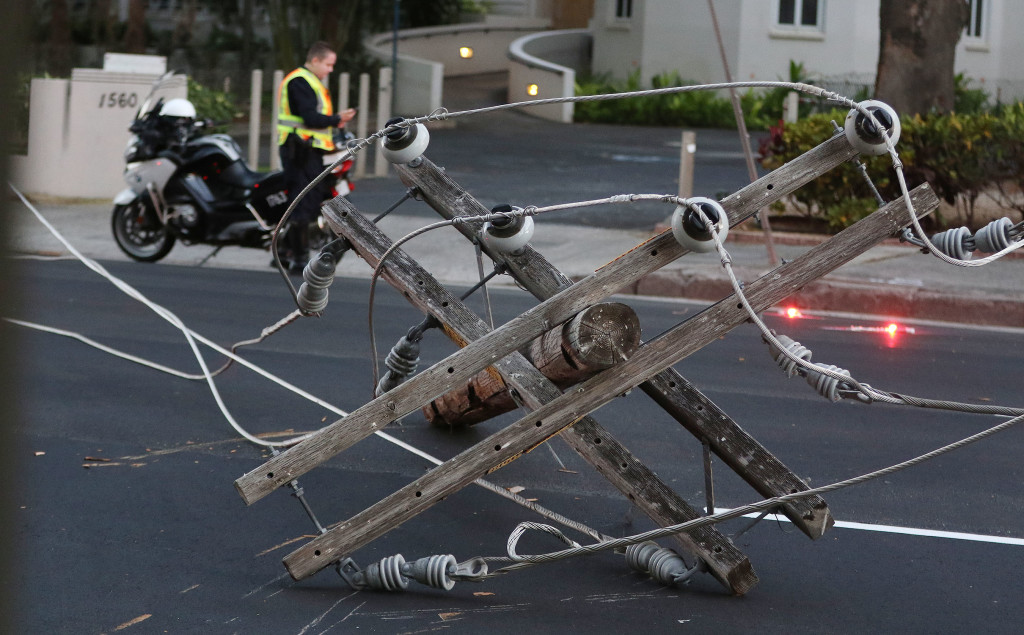 Maintaining electricity in the wake of a major storm is also key to keeping the water supply flowing.

Oahu’s sprawling electrical grid — the 3,000 miles of lines that deliver power to local homes, stores, fuel and water pumps — is in better shape than Puerto Rico’s was when Hurricane Maria pummeled that Caribbean island.

Still, the two islands’ grids share a similar, fragile design, in which most power is generated on one end of the island, then sent across rugged terrain to heavily populated cities and towns on the other side.

That disjointed layout helped leave parts of the Caribbean island without power for nearly a year after Maria struck.

“We’re just like Puerto Rico,” said Kyle Datta, a general partner at the Honolulu-based social investment fund Ulupono Initiative. “We’re not designed yet for turning the lights back on gracefully.”

If Oahu suffered a direct hit from a hurricane, it’s hard to say how long the island’s communities would be left in the dark. However, it won’t be comparable to the extended outages that plagued Puerto Rico, HECO officials say.

HECO would draw on its mutual-assistance agreements with mainland utilities, which would send their own crews and equipment to help restore power to Oahu.

Of course, that plan depends on Honolulu Harbor being open to get the equipment on-island. The roadways need to be accessible to move workers around Oahu. The water system must be working to operate the power plants. And the water system needs electricity for its well pumps to operate.

“All of those pieces work in sync with each other,” says Scott Seu, HECO’s vice president for public affairs. “You can plan for certain scenarios. Guaranteed you probably haven’t thought of all the different twists that will be thrown at you.”

Seu points to a more specific weakness in Oahu’s grid beyond its overall design — one that worries him even more. There’s no electricity generated on the Windward side.

The gap leaves the Windward region and parts of East Oahu especially vulnerable to an extended outage after a major storm.

“You can plan for certain scenarios. Guaranteed you probably haven’t thought of all the different twists that will be thrown at you.” — Scott Seu, HECO vice-president.

If any lines or towers fail along that arduous path, it could leave thousands of people without power, indefinitely.

The issue clearly weighed on HECO President Alan Oshima as Hurricane Lane bore down on Oahu.

“On this island, I’m more concerned about the trans-Koolau transmission lines,” he said during an Aug. 24 briefing at a state emergency bunker inside the Diamond Head crater.

It’s “an area that we really need to think about,” Seu added during a subsequent interview.

HECO still needs to make sure all the Windward fire and police stations, the wastewater treatment plants, the clinics and other critical facilities have backup power generation.

Islandwide, the utility wants to help create “community enclaves” — isolated spots that are specially hooked up in advance for backup power generation. In an outage, nearby residents could head to these spots — say, a shopping plaza — for access to electricity, groceries, fuel and ATMs.

For Hawaii, however, such enclaves are still conceptual. “We are not far” along in identifying where those Oahu enclaves would be, Seu said.

In the long term, fixing Oahu’s grid weaknesses will also require big changes to the grid itself.

The grid will always rely on transmission lines. Still, as the state moves toward its 100 percent renewable energy goal, the grid can simultaneously be made more durable, allowing HECO to restore power more quickly, officials say.

Smaller, renewable energy substations, such as the new 50-megawatt biofuel plant at Schofield Barracks, could replace the larger-coal-fired plants clustered in West Oahu.

These emerging smaller plants and microgrids could pop up in different, strategic parts of Oahu. If the grid fails, they could stand up on their own — like independent cells or islands — and send power to the nearby area.

“You have to have places on the grid that have strong enough back-up power to regenerate,” Ulupono’s Datta said.

Further, it would require community buy-in on any new sites, because even the smaller renewable plants will leave their footprint on an area.

Electricity also powers the pumps that supply about 145 million gallons of fresh water every day across Oahu, at 79 well stations.

If the island loses its electrical grid, the Board of Water Supply estimates it could supply about 30 percent of that capacity, using seven mobile generators.

The limited water would only be accessible in several places, however. Residents in St. Louis Heights, for example, would have to venture out of the mountains to the Kalihi pump station. Elderly and residents with disabilities could have trouble reaching the designated water areas without help.

Hawaii’s emergency officials recommend households keep a 14-day supply of water, with at least one gallon of water a day per person, in case a hurricane strikes.

“This is the reason why — because we depend entirely on Hawaiian Electric power,” BWS Manager and Chief Engineer Ernie Lau told Civil Beat. “And we know the Hawaiian Electric grid is going to suffer damage, either at the transmission-distribution system or the generation facilities, which are in vulnerable areas along the coastline.”

Haleiwa, Waialua and Waianae would be especially isolated, with no BWS generators set to immediately deploy near there. The agency would likely send water tankers to the region, but their capacity is limited.

Currently, the agency’s mobile generators only have fuel to last about a day, but BWS officials say they’re working with the Hawaii Emergency Management Agency on a refueling plan to keep those generators going.

Oahu’s water officials are also counting on parts of the grid to be eventually restored so it can re-deploy their generators to other sites, namely the North Shore.

They aim to buy an eighth generator soon and eventually more after that, but the costs are a challenge. Each of these large generators costs from $200,000 to $300,000. The agency already has its hands full repairing the island’s water pipes, which are nearly a century old.