Tom Yamachika: Is There A Future For Unemployment Insurance?

Tom Yamachika: Is There A Future For Unemployment Insurance?

Because of COVID-19, a tremendous strain has been placed on Hawaii’s fund and it is dwindling rapidly. 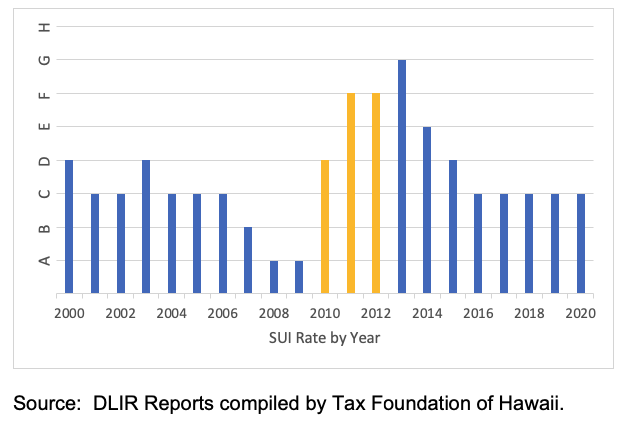 Multiple readers have asked about unemployment insurance and how it is going to fare after the pandemic.

This will give you an idea of how the system works.

State unemployment insurance is largely funded by employers. Most employers are charged a tax that depends on two things: the overall health of the fund into which SUI tax is collected, and the claims history of the employer.

So, an employer with a long history of chargeable claims, for example, will pay more than others. Also, if there is lots of money built up in the fund, then the tax rate goes down for everyone.

The health of the fund determines the proper tax rate schedule. The schedules are named after a letter of the alphabet, with A the least costly schedule and H the most expensive.

The fund health is measured at the end of the year, and that measurement is used to set the rate for the following year. Here is a chart of the SUI rate schedule for the past 20 years:

Although the Great Recession of 2008 and related events caused the fund to run out of money and we needed to borrow around $180 million from Uncle Sam, employers were not subjected to the dreaded Schedule H because our lawmakers passed special legislation to control the SUI rates and override the normal formulas for the years 2010 through 2012 (the orange bars in the diagram).

What can we expect once the year ends?

Lately, the volume of unemployment claims has been so great that the authorities set up a processing center at the Hawaii Convention Center.

Our fund started off the year at nearly $600 million but has been draining rapidly. A news release dated July 2 said that the Department of Labor and Industrial Relations already has paid out $1.85 billion in benefits.

Fortunately, federally funded benefits such as the extra $600 per week paid to those on unemployment are not charged to employers because that money does not come from our fund.

Our fund started off the year at nearly $600 million but has been draining rapidly.

The state’s budget bill, Senate Bill 126, section 38, appropriates federal CARES Act money to fund an additional weekly unemployment benefit of $100 per week once the federal $600 per week runs out. Those benefits will not affect the SUI fund either and should not count against employers for the same reason.

Nevertheless, with an unemployment rate peaking at 23.8% in April, a tremendous strain has been placed on the fund. There will be a spike in SUI rates next year unless our government does something to prevent it, as it did for the years 2010‑12.

Is our government simply going to wait around for the automatic increases to take effect from the beginning of 2021? Some businesses might not survive another hit at that time.

Perhaps some thought should be given sooner rather than later to the impact of elevated SUI rates. 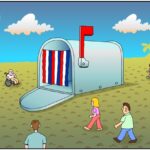 John Pritchett: The Ballot Box In 2020

With due respect to the author and other commenters, I disagree in that I think no one is thinking about how to truly reform or reinvent our social safety net for a wider range of plausible 21st-century pandemic and post-pandemic future scenarios, ranging from business as usual "continued growth" to mostly low-wage job growth and possible "jobless" growth, as well as various possible forms of "STEEP" stagnation, decline, collapse, and more transformational restructuring scenarios.Regarding unemployment insurance in particular, I think a more resilient and adaptable foundation for a reinvented safety net should be universal basic income and universal health care for all, both based on citizenship, rather than employment.I think both will be more cost-efficient for taxpayers and businesses, and will stimulate more entrepreneurship and job creation than anything else we could do, IMO, and would not expect government to somehow get better at diversifying the economy.

The return of the Hawaii economy is currently not predictable because it is dependent on economies that are currently pandemically challenged, and the supplies we need to reopen safely are being gobbled up by those economies. I expect our economy to be crushed to the bedrock before there is a chance to build back up, mostly because I think the length scale to get control of this virus will be at least next summer at the earliest.  So, how do you want the rules set up for the rebuild? If you make it too expensive, as with the unemployment insurance, then only the big chains have a chance because no-one else will have the capital. Now is the time to get this straight, because once the economy gets even worse than it is now no one is going to care about local vs. big chain because desperation makes vultures of us all.

"federally funded benefits such as the extra $600 per week"Has SUI and social service welfare merged?Since the US Gov. can can tap into an infinite supply of credit from the Central Bank, which has been enabling the gov. for 30 years to spend more than it makes on revenue to the tune of over a trillion a year and rising with increased deficit budgets, SUI is pocket change for the FED.Considering that the US Central Bank has been giving credit at 0% to financial institutions both domestic and foreign, with the realization that debt doesn't matter to the US Gov. and the world is stuck with the US dollar for international commerce, why not increase the unemployment bonus to $2000 a week for Americans in need?