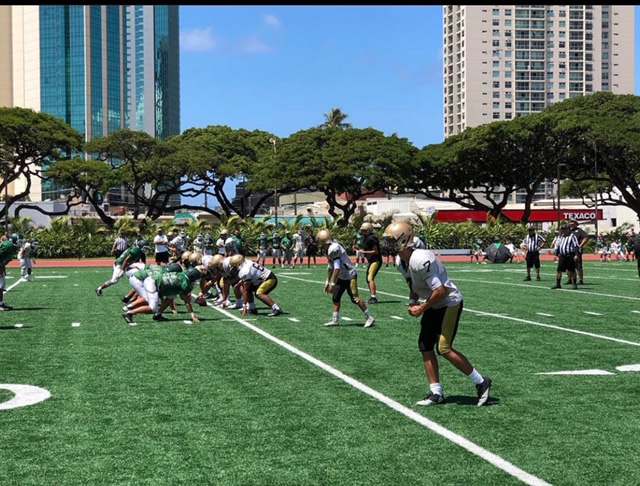 There will come a time post-pandemic when high school football teams once again will play before cheering crowds in stadiums.

And when that time comes one of the saddest football teams will be the McKinley High School Tigers.

That’s because football players at McKinley with its new $5 million football field cannot play games on the expensive artificial turf — largely because of complaints going back more than a decade from residents in nearby luxury condos and also some foot-dragging by the Department of Education.

The football field is part of McKinley’s $121 million new athletic complex, but instead of being the centerpiece filled with cheering crowds at home games, the field is used only for football practice.

“We have the most expensive practice field in the country,” McKinley principal Ron Okamura says.

McKinley’s football field can’t be used for games because it has no lights or bleachers.

Soon after planning for the athletic complex began in 2008, the DOE caved in to complaints from residents of nearby luxury condominiums who said they would be bothered by the cheering noises, band music and bright lights if McKinley got a field with lights.

Hence no lights or bleachers. The issue returned to the table in 2017 when the DOE began a new environmental assessment — this time to seriously address instead of backing away from the impact of lights, bleachers and night football games on the surrounding community.

UPDATE: The Ala Moana-Kakaako Neighborhood Board on Monday discussed the pros and cons of McKinley’s wish to construct 5,000 seat bleachers and lights on the school’s football field, but it took no position.

Residents of the nearby Moana Pacific, Pacifica Honolulu and 909 Kapiolani condominiums say if there are night games at McKinley, then besides glare from the lighting and noise, there also will be traffic jams, illegal parking and strangers walking through the neighborhood.

A Moana Pacifica resident wrote in an email: “Not only the bright stadium lights but the noise will be horrendous. Even during the afternoons when the marching band used to practice pre-pandemic the sound carried and it was as if they were playing in my apartment. All units have double-paned glass but even that couldn’t keep out the sound.”

Principal Okamura says nearby residents should be more realistic: “When you buy property close to a high school you should expect there are going to be changes and activities might be noisy.”

McKinley athletic director Bob Morikuni says, “There has to be some give and take here. It’s not like football games at McKinley will be year round and inconvenience everybody for the rest of their lives.”

Hawaii’s football seasons traditionally are from August through October and only into November if a school makes it into the playoffs.

Nearby resident Valerie Umeda also feels there should be some give and take and suggests a compromise of having bleachers but no night games.

House Speaker Scott Saiki lives in one of the condos that would be impacted if McKinley built a football stadium. Saiki says if there are stadium lights, he hopes the school will opt for the least intrusive ones.

Eighteen other Oahu public high schools have bleachers and lights to enable their players to host home games attended by their families and fellow students to cheer them on.

Only McKinley, Kaimuki and Kalani high schools lack their own football stadiums with lights and spectator seating.

McKinley senior Lincoln Naki says this is unfair. He will graduate in June without ever playing a game on his school’s field — only scrimmages.

For high schoolers, home games build pride and attract more supporters from campus as well as families and alumni. Schools can charge admission at home games.

“We should be able to have what all the other schools in the state have. There is something grand about having a home game on your own campus,” says Naki.

Currently the only spectator sports at the McKinley football field are soccer matches with parents and students sitting on beach chairs they haul to the school. Or they watch the soccer games by standing up by the fences.

Former McKinley athletic director Neal Takamori says the problem began when the new football field was being planned around 2008.

He says in an abundance of caution, the DOE advised McKinley to exclude football field lights and bleachers from its environmental assessment in 2011 to avoid the opposition the DOE anticipated from the neighboring condominiums.

Takamori says, “Anyway, here we are almost 10 years later with no lights, no football stadium.”

He says he regrets not standing up for the students then and insisting that the field lights and bleachers be addressed in the environmental assessment.

“In hindsight, we did the students a disservice. The kids in this school really deserve to have a facility of their own and not to have to travel to other schools every time they play a game,” he said.

Takamori retired last year after 40 years as a teacher, coach and athletic director.

The second environmental assessment started in 2017 and has lingered at the DOE until now.

DOE Assistant Superintendent Randall Tanaka says the draft of this environmental assessment will be completed next month for internal review and then be available for public review.

The Legislature and the governor have already allocated $3.2 million for the design and construction of lights and bleachers for the McKinley field.

House Speaker Saiki says now much of that money will go to paying for the environmental assessment.

The delay in resolving issues with the community has made the football stadium project more expensive.

Tanaka, in charge of operations and maintenance for the DOE, inherited the football field fiasco when appointed deputy superintendent in January.

He is eager to see the issue with the neighbors resolved and the students of the distinguished school get their stadium.

Tanaka jokes, “McKinley has been there since the day after the birth of Jesus.”

It is the oldest public high school on Oahu, known initially as the English Day School when it was established in the basement of a church on Fort Street in 1865.

After moving to three other places, the school ended up at its present location on King and Pensacola Streets in 1923.

Many of McKinley’s Spanish-colonial style revival buildings are on the National Register of Historic Places. It is one of the most beautiful schools in Hawaii.

Interestingly, many of the neighbors in the condominiums who are against stadium seating and lights currently enjoy unobstructed views in the crowded Kapiolani Boulevard area because of McKinley’s large, grassy football field, and some also exercise on the field.

Tanaka says once the environmental assessment is reviewed and accepted, it will take at least another two years for McKinley’s stadium to be a reality.

McKinley offensive lineman Naki says it will be too late for him but it will be good for future students.

“I just hope some senior will finally be able to play his heart out at a home game at McKinley under bright lights, energized by his parents, students and alumni yelling their lungs out to support the team,” he said. 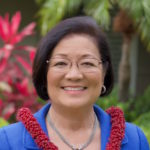 Your Vote Is Safe — And Vitally Important To Our Democracy

It seem that the condos owners are saying, "I got mine, you don't get yours"  I guess when they bought their condo they lost their Aloha.  Being said the DOE need to step up to the plate and complete MHS football field!  When you build a football field, you know there will be night games!  Just have all night game end at 10PM just like the Shell.Nuff Said!

Hello condo owners, if you don't like urban city noise, please move out to the country.  Oh, they will probably complain about the loud crickets at night.

NIMBYsm and entitlement at its finest. You buy a condo or house near a school, expect noise, traffic and Friday night lights. Having said that, I think our stadiums can do a better job of pointing the stadium lights down. Many spill light up which is a waste of energy and contributes to light pollution.