A mother tired of asking the city to protect children on a dangerous road in a school zone has found her own way to bring about change. 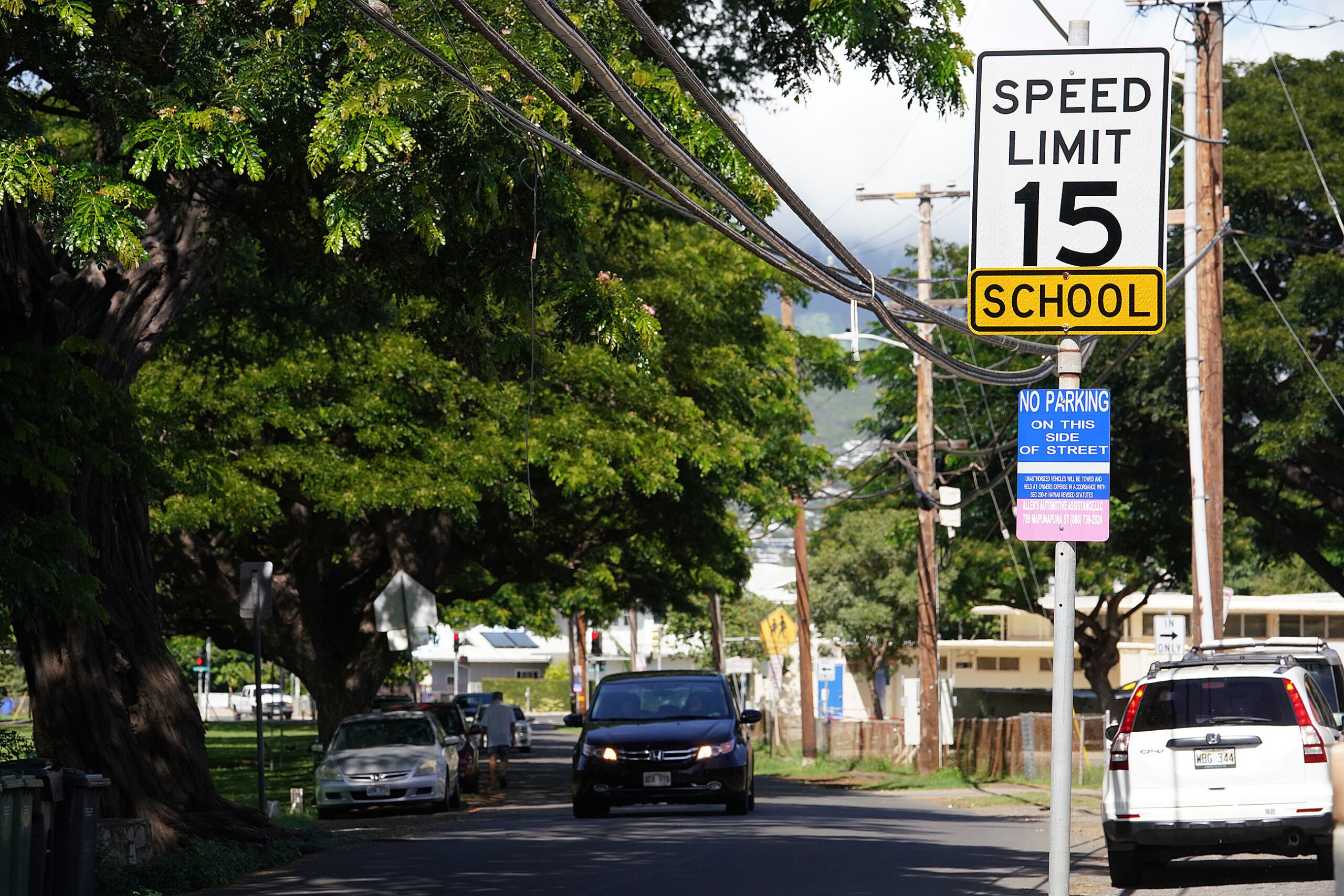 What can a person do when the city refuses to make a dangerous road safe for children walking to school? One answer is to buy the title to the road and impose your own safety rules.

That’s what Diamond Head resident Mary Moriarty Jones did after what she describes as five years of frustration, trying to get the city to reduce speeding and install sidewalks on a section of Leahi Avenue owned by The King Lunalilo Trust.

She is now imposing her own rules on the road and that’s getting some people who use it upset.

“All I wanted to do was to be able to walk my kids to school without fearing for their lives,” says Jones.

Jones, a Native Hawaiian, says she was surprised by the perils of Leahi Avenue when her daughter entered kindergarten at Waikiki Elementary School five years ago and she began to walk her to school, dodging cars along the narrow avenue.

Leahi Avenue alongside the school was once a quiet back street off Kapiolani Park but over the years drivers in a hurry turned it into a shortcut for speeding.

Bruce Heinman, who often walks the street with his wife Dede, calls it “a beautiful street with a hazardous configuration.”

“It is a threat to pedestrians and local animals. I would hate to see one of them squished under a tire,” Heinman says.

The dirt shoulders of the road are often impassable for walkers because they are blocked by parked cars.

Other shoulders are difficult to navigate because they are dotted with boulders to keep people from parking or dominated by bushy landscaping a few abutting homeowners have illegally extended out to the road.

And there are no sidewalks except on one short block behind the city’s Paki Hale.

“In the impassable places, pedestrians have to walk out into the street,” says Jones.

Jones finally gave up walking and started driving her daughter and son to Waikiki Elementary even though the school is only four blocks away from her house. She was worried they might get hurt.

City officials told Jones they couldn’t help her because the section of Leahi Avenue she wanted improved was private property — one of the hundreds of private roads the city declines to take over because of liability concerns and also because many roads do not meet city code.

Jones persevered by taking a petition to her neighborhood board, hoping to get the city to pay attention. She says she met with the board off and on over four years with the board forming a subcommittee to address the issue.

“She is the most tenacious person I have ever met,” says Diamond Head Neighborhood Board member Linda Wong.

When Tommy Waters was elected to the council, he agreed to intercede but he says he also got nowhere with the city.

“It was just a mess because the city would not take ownership. There was nobody to turn to for help,” says Jones.

“I hit a roadblock when one day I had a brilliant idea: to form a group to take over the road,” she says.

She appealed to Lunalilo Trust to give fee simple ownership of the road to a limited liability company she founded this February called Safe Leahi LLC.

Lunalilo Trust manages the estate of William Charles Lunalilo, the sixth monarch of the Kingdom of Hawaii.

Lunalilo once owned an estimated 400,000 acres of land spread out on five Hawaiian islands — valuable property including Kapahulu, Diamond Head and the lots where the International Marketplace now sits.

Lunalilo’s will stipulated that all of his land be sold to create a home for “poor, destitute and infirm people of Hawaiian blood, giving preference to old people.” That home now cares for up to 42 residents on a 5-acre campus at the foot of Koko Head Crater in Hawaii Kai.

Diane Paloma, the executive director, says Lunalilo Trust was unaware it owned Leahi Aveune until Jones brought it to their attention with documents and maps she had researched at the Bureau of Conveyances and the State Archives.

Lunalilo Trust then implored the city to take over Leahi Avenue but the city said it would do so only if the trust improved the road to the city’s standards. The trust said it lacks funds to do that.

Last month, the King Lunalilo Trust transferred ownership to Jones’s company for $10 — a standard legal fee — in a quitclaim deed to give Jones’ control over Leahi Avenue from Noela Street to Monsarrat Avenue.

Paloma said it was a difficult decision for the trust because the road was the last remaining piece of Lunalilo’s once vast original estate.

“Our biggest concern was for the kids walking to school on the road with no sidewalks,” Paloma says. “If a child got injured on the road it could pose a liability and that was a risk the trust would not be able to survive.”

Paloma said retaining Leahi Avenue also offered nothing to enhance the mission of the trust since it could not close the road to put up another care home.

In the deed, Lunalilo Trust requires that Safe Leahi must keep the road open for pedestrians and vehicles with no toll fees, and that any fees charged on the road for parking or for other reasons can be used only to maintain and operate the road, not for profit.

Jones also must relinquish ownership of the road to the city if the city ever wants to take it over.

Since taking over ownership, Jones has erected her own traffic signs to reduce the speed limit on Leahi Avenue from 25 to 15 miles per hour and installed other signs to warn drivers to move their parked cars off the shoulders.

Jones’ tow away signs have angered some residents in the apartment buildings on adjacent Pualei Circle, many of whom park their cars on Leahi.

Curtis Chee says Jones failed to give residents on Pualei Circle enough warning about her intentions.

“People just went out one day and saw two women putting up new traffic signs reducing the speed limit and signaling tow away zones,” he says.

“I am getting a lot of negative reaction. It would have been better if she provided more transparency about what she is doing. She should have tried first to built relations with the community,” says Chee.

Chee is president of the association of apartment owners at The Gregg Apartments on Pualei Circle.

He says parking is a big issue on Pualei Circle because many owners of units in the 12 apartment buildings on the circle have only one assigned parking stall yet they own two vehicles and have to park some of them on Leahi Avenue.

Jessica Gasiorek who lives on Pualei Circle says she is grateful for what Jones is trying to do.

She walks her 18-month-old daughter in a stroller to day care every morning and home again. She says she worries when she has to edge the stroller out into the road where there is no sidewalk.

“It is not as though there is a steel wall protecting my daughter in the stroller from speeding cars on the narrow road. It is really unsafe,” she says.

Residents are expected to testify Thursday at a meeting of the Diamond Head, Kapahulu, St. Louis Heights Neighborhood Board.

Jones said she expected pushback. “Change is hard. There is resistance to many of the things I want to do.”

She says she intends to charge fees for parking on the makai side of Leahi Avenue to pay for insurance and repairs she is now responsible for on the street.

Her goal is to raise enough money from parking fees to eventually construct a sidewalk.

In the meantime, she says she intends to clear all parked cars off the road as well as require abutting homeowners to remove all the landscaping and rocks they have placed on the shoulder to clear a safe path on which pedestrians and strollers can pass.

Council member Waters says he is still trying to get the city to take over Leahi Avenue by pointing out that the city has two facilities abutting the road, Paki Hale and the city’s water safety office. And he sees the need to protect school children.

He also said he is considering pitching the idea of getting the Kapiolani Park Trust to take over the section of the road that abuts the park.

“It is really a shame,” Waters says. “We should not have to have our kids walk in the middle of  the road.” 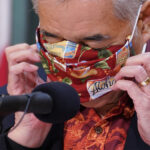 Lee Cataluna: Who Will Enforce A Statewide Mask Mandate? Us? Again?

YES! Let's get some speed bumps out there too!

Who will enforce the reduced speed limit?  It is private property now so HPD can't do it.  Their jurisdiction for moving/traffic violations is limited to enforcement on City and County and State roads and only official signage can give proper notification of such posted speed limits.  Suppose she could hire a private security agency similar to what malls do.  As to towing cars on her property, she does have the right to do so if they are parked on her property (would like to find out how much of the shoulder of the road she owns though).As to people saying she is protected from liability because she set up a LLC, the first negligent homicide case (death involving cars) that occurs here will definitely put that to the test.  Wonder if we will see a story along the lines of "Family of Student Run Over on Unsafe Road Stymied by Landowner."

How can speed limits be enforced?