Danny De Gracia: More People Are Going Hungry And It's Only Going To Get Worse - Honolulu Civil Beat

Danny De Gracia: More People Are Going Hungry And It's Only Going To Get Worse

Hawaii is expected to go from 19th in the nation two years ago in lacking enough healthy food to sixth by the end of this year. 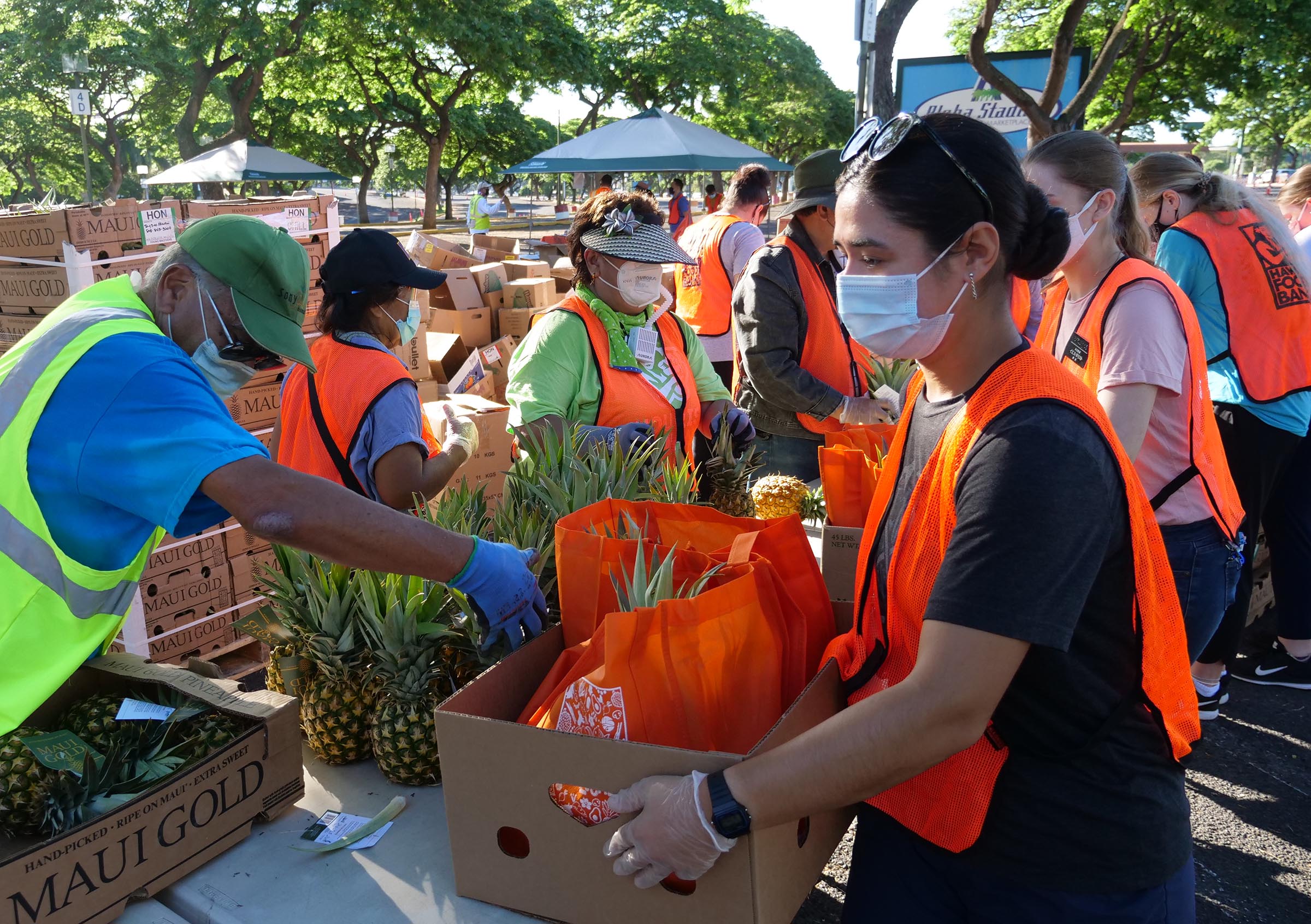 Though COVID-19 vaccines are set to be deployed around the United States starting Monday, even with this welcome development, the ongoing pandemic and its impacts to Hawaii are nowhere near over.

It will take weeks to drop the number of infected persons – both known and unknown – to a manageable level; tourism cannot be profitable so long as restrictions or quarantines are in place; and worst of all, Hawaii’s already existing structural economic problems have been amplified by the crisis.

Gov. David Ige’s recent announcement that he has instructed state agencies to begin preparing for furloughs as soon as January has the potential, even right now, to trigger a food insecurity crisis in the islands.

Health outcomes are significantly linked to socioeconomic status and household income. The less money one makes, or the less purchasing power that one’s money has, the less healthy individuals are likely to be, and the greater the risk of food insecurity, or lack of healthy or sufficient food.

For all people in Hawaii, the data is even gloomier. Hawaii has a projected 2020 rank of fourth in the nation for highest projected change in food insecurity, or 16.8% food insecure overall, up from 11.2% in 2018. 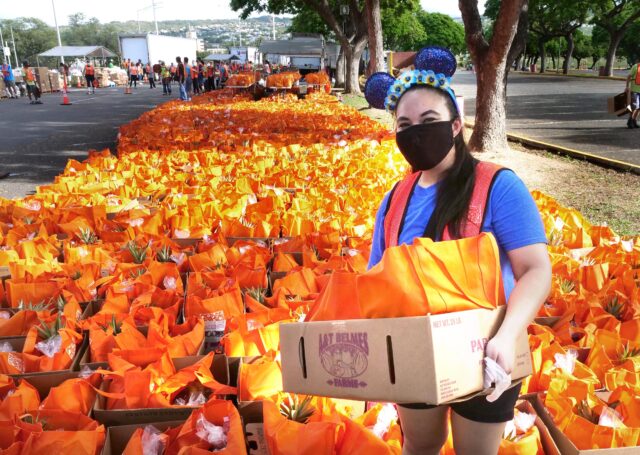 Volunteer Crystal Siruno holds a box of bagged food to be distributed to 2,500 Hawaii residents last month at Aloha Stadium. She said she wore her special Mickey Mouse ears headband to “help spread a little magic” around the free pop-up food distribution event organized by the Hawaii Foodbank.

Just two years ago, the state average of keiki living without access to sufficient healthy food was approximately one child per food insecure household. When looked at on a county level, it came down to 1.3 keiki in Hawaii County per insecure household, followed by 1.2 in Maui County; 1.0 in the City and County of Honolulu; and 0.6 in Kauai County.

For adults, a statewide average of 1.5 persons per insecure household were living in Hawaii in 2018, with the highest reported in Hawaii county at 1.8 per household. And among those who reported being food insecure in 2018, 66% said they could not afford nutritious foods or balanced meals.

Blows to Hawaii’s tourist economy, followed now by reduced income for state government employees if furloughs begin, have the potential to make it even harder for local families to get the foods they need to stay healthy.

As it is, many businesses are barely staying open due to the reduced number of customers as a result of COVID-19. If household income takes further hits from furloughs, it will be harder on everyone from suppliers, to grocers, to restaurants, right down to hungry families.

The Time To Prepare Is Now

Saving money in Hawaii is one of the hardest things to do even under normal circumstances, and in these times of pandemic and economic turmoil, it can be almost impossible. Nevertheless, Hawaii’s people need to take matters into their own hands and begin preparing now for harder times. 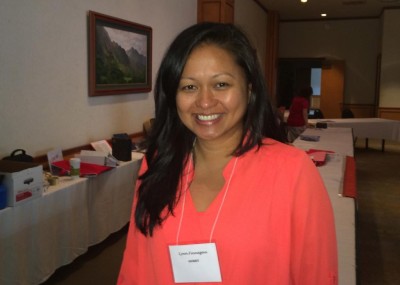 Years ago, during my last session appointment at the Hawaii Legislature, then-Minority Leader Lynn Finnegan shared with me and others in a caucus meeting an ambitious proposal to help struggling locals with a policy package internally nicknamed “Hawaii Saimin.”

I asked what saimin had to do with economics, and, being a mainland transplant to Hawaii, I was quickly schooled by three legislators that saimin, allegorically speaking, represents the collective action of a community to make things work and get people fed.

I must admit, I later spent some time after that meeting on YouTube and at Shiro’s Saimin attempting to research that concept further, but I never forgot Finnegan’s insightful lesson that traditionally, Hawaii locals come together to fix local problems as one. The people who made it in Hawaii’s days of old, just like now, were tough, resourceful individuals who took initiative and prepared in advance for hard times.

Throughout the islands, people and organizations have been working hard to help each other get through the coronavirus pandemic and social and political rifts. We’ve been documenting these efforts in a special Community Scrapbook. Please let us know about any upcoming events or send us your own photos, we’d love to include them!

In that same spirit, as COVID-19 continues to plague us, we need to start thinking about gardening at home and planting fruits and vegetables so that we can start to have a little bit more control over our access to and supply of healthy food. For those who don’t have the ability to garden, now would be a great time to start having shared gardens with friends or family who do have available land. If we can’t afford to buy food in the future, then we’re going to need to start growing it ourselves.

The state and counties should also start to think about the possibility of opening up portions of parks or other public areas and allowing them to be converted into community gardens. This kind of homegrown independence, if you’ll pardon the pun, is precisely the kind of thing that we need not only to stay healthy, but also to impart agricultural knowledge to younger generations.

Elected Officials Still Have A Job To Do

I also still think that our congressional delegation needs to aggressively pursue more federal assistance for locals, especially in the area of food security and funding for local government. As I have said before, when the government tells you to stay home or orders you not to engage in economic activity it deems hazardous, it is the government’s job to provide for you while you are at home.

When the electoral college votes for Joe Biden on Monday, one should also remember that one of his key campaign promises was to fund states with federal assistance so that they don’t have to furlough or cut spending due to COVID-19. Someone should remind the governor and our Legislature that a new president is on the way, and we shouldn’t make drastic statements or take drastic actions that negatively impact the economic condition of our state.

Food insecurity doesn’t have to be our future. Let’s start preparing our community, and properly stewarding our government. 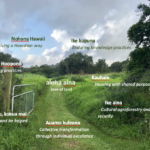 7 Principles To Transform Housing In Hawaii

Joe Biden has promised a lot of things he can't pay for;  either he won't follow through on all his promises or he will print so much money that the dollar becomes worthless.  We shall see.

As I understand it, much of the Micronesian community lives in poverty in very crowded housing. In addition, there are many houseless people (of many ethnicities) throughout the state,  Where do you think any of them could have a garden big enough to feed even one person? These groups have been largely ignored during the pandemic (for example, no thought until very late in the game to translating guidance and restrictions into Micronesian languages--and I'm not sure it's being done now.)  Let's not ignore them when we talk about food insecurity, or make suggestions that would only be possible for people who are better off.

Here an excerpt from Joe Kennedy III's speech on December 9th while resigning from Congress. "the counterweight to the great lie of our times: that the American pie is finite. That for my family to survive, yours must suffer. That the richest nation on Earth is somehow plagued by scarcity â rather than greed." He added, "Loosening that lieâs grip on our country is the work of our generation. For the people who feel unseen, unheard and unpresented. For those most in need of assistance and protection, justice and opportunity, who have been told by their government that there is just no room or money or time or will. And (then) that injustice is a reality etched in stone, rather than a deliberate choice by those in power, about who is worthy and who is not." What does this mean? We have money from the government . Why did we not spend it? Does he mean there is enough money for is all? We just never going see it. Stimulus checks, we all need one, aren't happening this time. But protections from litigation are for business. The checks only were some billions of dollars, cheap compared to other giveaways.Gardening is a great idea as long as you do the weeding too.