Denby Fawcett: Diamond Head Is A Tourist Trap. It's Time To Change That - Honolulu Civil Beat

Denby Fawcett: Diamond Head Is A Tourist Trap. It's Time To Change That

The drop in tourists during the COVID-19 pandemic could give the state a chance to transform the attraction into an unforgettable natural and cultural experience. 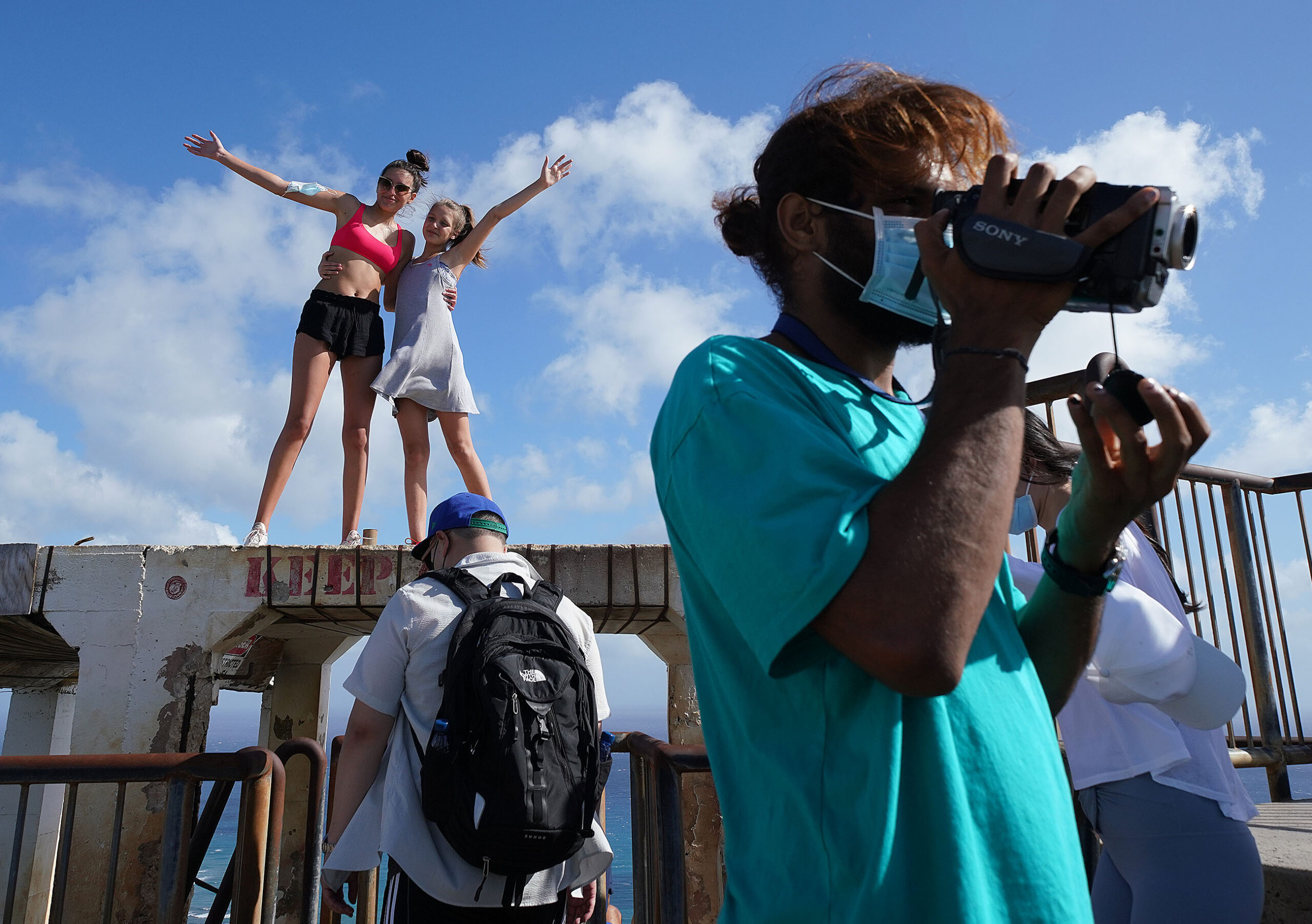 When Diamond Head State Monument reopened after its nine-month pandemic-driven shutdown, visitors were clamoring to get back inside the famous volcanic crater.

Even with scant prior notice, 945 hikers showed up on opening day Thursday, zig-zagging up the trail to the Diamond Head summit to finally be able to enjoy the sweeping views across Waikiki to the Waianae Mountains.

Photographer Cory Lum and I were among those eager to get back in. We hiked the trail the day after the reopening and were struck by how green and lush it had become.

The winter rain was partially responsible for the greenery but more importantly, the landscape had been able to recuperate from the relentless pounding of pre-COVID-19 crowds — an average 3,000 people a day, and on one alarming December day a year ago 6,000 visitors squeezing in.

“People were loving the trail to death,” former Diamond Head coordinator Yara Lamadrid-Rose once told me.

Before the crater was opened every day of the year. Now it will be open from 6 a.m. until 6 p.m. Thursday through Sunday and closed on Christmas and New Year’s Day.

The State Parks Division, the agency that manages Diamond Head, is currently exploring new ways to transform the crater from the tourist trap it had become before the pandemic — a hike many non-residents did merely to tick it off their bucket lists — into the unforgettable natural and cultural experience it ought to be.

With visitor numbers to Hawaii still incredibly low, there is time for the Parks Division to figure out creative ways to make the visitor experience better, although it will be difficult to get additional money to do that especially in the face of deepening state budget cuts and a freeze on hiring new employees.

State Parks assistant administrator Alan Carpenter said one of the key things he learned when the crater reopened Thursday is that visitors are eager for more information.

Additional staff members were deployed to the crater for the initial opening days to monitor visitor numbers and enforce safety protocols, and also to share their knowledge about the crater’s flora and volcanic origins.

“The hikers seemed to be hungry for more information. We need more staff here to share their knowledge,” said Kelly Cheesebourough, an archaeologist who usually works downtown in the Park Division’s Interpretive Program office but was there to help with the reopening.

Assistant parks administrator Carpenter says in the future staff members like Cheesebourough and others might be rotated in for temporary stints to provide enriching experiences for hikers.

Also, interns could be enlisted and volunteers from nonprofits like Kupu Aina, who came in during the closure to work with the Hawaii Youth Conservation Corps on painting and landscaping projects.

Many would agree that Diamond Head must never again suffer the pre-COVID-19 crowds that drove local residents away from the hike, ending up, Carpenter says, with 90% of the crater’s daily visitors being from out of town.

More local residents may start returning to the crater now because if they bring some form of local identification they can walk or drive into the crater for no charge. Previously locals and visitors both had to pay $1 to enter on foot and $5 per car.

Entry fees for non-residents now have increased to $5 to walk in and $10 per car to drive in. Commercial vehicles now also pay increased entry fees, depending on their size.

The monument lost about $1 million in entry fees while it was shut down.

Carpenter says if the trail gets too crowded in the future workers at the parking concession can limit vehicle entry as well as ask people arriving by foot to wait a bit until numbers on the trail are reduced.

And for the long term, Carpenter says they are looking at instituting an online reservation system to limit the number of visitors to the crater at any one time.

That would be similar to the state’s successful online reservations system that started last year to limit overcrowding at Kauai’s Haena and Na Pali Coast State Parks.

A key difference for hiking the Diamond Head trail now is the health precautions. Masks are required at all times in the crater.

When I hiked in the early afternoon on Friday I found it hot to be wearing a mask and at times difficult to breathe.

I noticed more people were taking off their masks as we got higher on the trail and even eavesdropped on a mask fight with a masked hiker threatening to take a picture of a woman hiking without a mask and send the photo to the police.

The unmasked woman behind me muttered, “I can’t believe he said that to me.” But she put on her mask.

It’s clear that without more staffing, the Parks Division will never be able to enforce the required 6-foot physical distancing requirements in the 225-foot long tunnel below the summit and at the summit itself.

When Cory and I hiked, people at the summit were crowded together shoulder to shoulder to admire the view, even though signs said not to crowd or linger.

I saw the same thing when I returned with my friend Alia Pan early Sunday morning to hike up to the top to see the sunrise.

Even more hikers were pressed close together then, but most of them kept on their masks. Maybe because we were there at dawn and it was cooler.

Alia said she felt nervous in the narrow tunnel with the two-way traffic of hikers squeezing in and pushing close to each other.

One of the best improvements in Diamond Head is the new one-way traffic system installed in the Kahala Tunnel through which all vehicles enter the crater.

Before it was an accident waiting to happen with two-way traffic including cars, trucks and large trolley buses. Pedestrians were forced to inch their way along the tunnel’s side on a barely 2-foot-wide path with only flimsy plastic poles between them and the traffic.

Now a traffic light allows alternate one-way traffic in the tunnel and the footpath is more than double in size with new brighter lights illuminating the tunnel’s interior.

Carpenter says he hopes to see a day in the future when staff and volunteers can be deployed to many different parts of the crater to increase the depth of the experience for visitors. 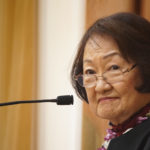 I am so surprised there is no mention of the tourists climbing beyond the fencing to pose and take selfies and hang out. Your pictures show this! We visited in February from the UK and were horrified to see so many tourists ignoring signs to stay within the viewing areas.  We got abuse from people when we told them they should not be climbing the fencing.  Would gladly pay a bigger entry fee to provide funds for a warden at the top to control behaviour and help with conservation. Such a beautiful viewpoint.

In the early 1980's, parking was free, trail was ok, no lights in the tunnel and spiral stairs (it was fun going in the dark or once in awhile others carried a flashlight), no huge crowds, heard about the concerts in the crater but never got to attend one.  In the 1990's still like the 1980's.  In 2015 had to pay for parking, lights in the tunnel, lots of tourist, improved at the top, still a nice view.I still bring guest up there as I believe it is something great to do on Oahu.

Just thought I would share my idea.   Goal: Create a perimeter ecotrail near or at the top of Diamond Head for people (tourist and locals alike) to enjoy a 360 panoramic view of the Ocean, Waikiki, the mountain and east Oahu.   The State can utilize the parking near KCC and create a revenue generating fee just like Haunama bay.  Everyone will enjoy it simply for the views and the ease of walking the trail.  Environmental studies and recommendations can be done to limit the impact of the trail in relation to erosions.    I truly believe that it is feasible.