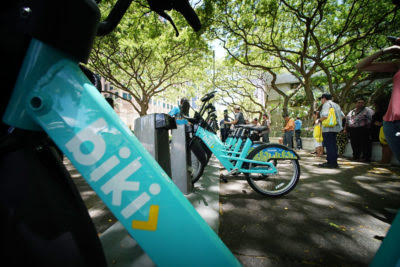 Honolulu’s popular Biki bike share program has attracted a huge ridership during its three and a half years in business.

A new audit requested by City Council members points out that the program, a partnership between the city and Bikeshare Hawaii, so far has collected more than $5.6 million in bike rental fees and hundreds of thousands of dollars in sponsorship fees and advertising fees.

However, the audit points out that the city has not asked Bikeshare Hawaii to share with it any of those revenues.

Now that Biki is successful and on the verge of expansion it should be required to start paying city fees and should work out a profit-sharing agreement as recommended by acting Honolulu auditor Troy Shimasaki. He says that’s the way it works in some other cities with bike share programs.

Biki also should address one of its key shortcomings: the program needs to pay more attention to the concerns of the people it is supposed to be serving.

Biki is a bike rental company managed and operated for the city by Bikeshare Hawaii, a nonprofit that works in partnership with a for-profit company called Secure Bike Share Hawaii. That company is a part of the Secure Parking Group, an international parking and maintenance firm headquartered in Sydney, Australia.

Critics are irked by what they say is Biki’s tendency to slap down new bike rental locations without giving residents and businesses that are affected ample warning to voice their concerns before the commercial entity appears seemingly out of nowhere on their front steps.

In 2017, when the program was being rolled out, Kakaako resident Ed Hampton said he was surprised to learn that a Biki station was about to be placed in his neighborhood of Kolowalu Park with no warning.

“They cut down two plumeria trees with white flowers, threw in some gravel and put up the bike docking station,” Hampton said Friday in a phone conversation.

Hampton said he was worried. “Bikes rolling through the grass of the park where very young children play on a play station and elderly people walk and adults do yoga on the ground was a dangerous mix,” he said.

He and other residents of the Hokua, Koolani and Kalia condominium buildings brought more than 100 signatures of protest to the Hawaii Community Development Authority and offered 10 other nearby sites for possible Biki station relocations, but to no avail.

“They had carte blanche to put the bikes where they wanted. You could speak out, but it was a waste of time,” Hampton said.

The audit shows the city gives the outfit exclusive rights to do business on public property without making it pay any of the permit or concession fees normally charged to other commercial firms  — resulting in a sizable revenue loss to the city.

The audit released Dec. 4 said the bike share program receives “a myriad of city exemptions to support its operations that are not formalized and lack transparency.”

Auditors said that in 2019 the city lost out on nearly $500,000 in revenue from 44 parking meters taken away to make room for Biki stations and from permit and concession fees that were waived for the use of the public’s land.

“Bikeshare Hawaii is falling short of its responsibility to be transparent and justify its use of city property,” the auditor said.

Also, the city structured its contract in a way that cut it out of any of the $5.6 million Bikeshare Hawaii received from rentals as well as the $1.4 million it has received in fees paid by sponsors to get their advertising on the bikes and other “adopt-a-bike” revenues.

The city and the state kicked in a combined total of $2 million dollars to get the bike program running.

According to the audit, the city lets Biki select where it wants to put its rental stations with little oversight after city officials issue Biki its permits to set up the rental stations on parts of city streets, sidewalks and recreational parks at no cost — valuable public land in the heart of Honolulu’s business and tourist districts.

The city’s justification for the special treatment was that Bikeshare Hawaii and its for-profit partner were taking on the financial risk to provide Honolulu with an environmentally friendly transportation service that reduces traffic congestion, improves residents’ health and makes it easier for people to ditch their cars to take short trips around town.

In return for the benefits it receives, Biki should be willing to pay attention to input from residents before it places its commercial rental stations in areas where people have objections about the placement.

When Biki was about to put a docking station at Pualei Circle at Diamond Head in June 2017 with no warning, residents hauled out their beach chairs and staged a sit-in at the “no-parking zone” where a Biki truck was pulling in to install the rental bikes.

The protesters objected to the commercial operation in the residential area where hundreds of people reside in 12 apartment buildings. Biki’s then-CEO Lori McCarney called off the planned installation.

McCarney also changed Biki’s plans when residents at the Diamond Head Ambassador objected to having a bike docking station installed in front of their condo.

“People should not have to protest after a bike rental station is installed; they should have a say before it happens,” said City Council member Ann Kobayashi, who authored the resolution calling for the Biki audit.

Cheryl Severn said she was surprised to see a Biki station appear with no notice in front of Leahi Beach Park near her Diamond Head residence on March 26, the first day of Hawaii’s coronavirus lockdown.

“Squeezing a rental bike station onto a sidewalk by a bus stop where people walk, bike, and there are cars coming down a narrow road around a blind curve, is an accident waiting to happen,” Severn said Friday in a telephone conversation.

“The bikes now cover part of a beautiful lava rock wall distracting from what was supposed to be a visual window across the park to the sea,” she added. “And the bike rental is a commercial rental in a residential area.  It should have been vetted with the public before they put it in. You have to be fair.”

Bike Share Executive Director Todd Boulanger said the residents weren’t given prior notice about the station because its placement on the wide sidewalk on Diamond Head Road didn’t affect residents by removing parking spaces or obstructing a residence or business.

Boulanger said he explained during a series of neighborhood meetings that the Leahi Beach Park installation had been an emergency move after Biki equipment was damaged by sprinklers at the Kapiolani Community College campus location and Biki was unable to find a mutually acceptable location on pavement with its KCC liaison.

The program is reaching out to the community as it expands, he added. “Planning for public bike share transit is very similar to planning for public transit,” he said Monday in an email. “The establishment of new service areas is a very public process with community meetings and presentations.”

The Biki rental station on the sidewalk front of Leahi Beach Park has been a contentious issue at the Diamond Head, Kapahulu, St. Louis Heights Neighborhood Board No. 5 for the last five months, but critics have so far been unable to get Bikeshare Hawaii to relocate it.

“The Biki pilot has demonstrated that this method of green transportation has been embraced by both residents and visitors to our island,” he said in a statement. “Department of Transportation Services is committed to adopting  the necessary changes and reforms identified in the audit, and working with Bikeshare Hawaii to ensure this essential service remains an available transportation option.”

I agree. City officials should adopt when possible the financial and oversight reforms identified in the audit, and while they are at it, urge Bikeshare Hawaii to be more responsive to the concerns of residents unhappy about Biki stations that have been plunked down in front of their residences and parks. 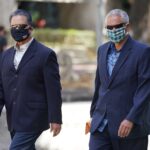 Louis Kealoha Ordered To Pay Back His $250,000 Retirement Settlement

Biki is a privileged, monopoly courtesy of Kirk Caldwell, who sent other bike share companies like Lime packing.  There are dozens of bike and scooter companies all over metropolitan areas across the nation and Biki is one of the lower tech outfits which still uses cumbersome, ugly docking stations that take up sidewalk and parking spaces.  In addition, to Biki needing to pay the city for their usage and profits, they should remove their docking stations from public areas like Diamond Head road, just before the lookout, as they a billboard eye sore and create a hazard for runners and walkers that now need to get around the bikes.  There are numerous examples of these big, ugly docking stations popping up all over town.  Question is why they are allowed at all on public property and if so, why are they getting a free ride?  Something for mayor Rick to scrutinize.

Tell me how a company can just set up shop all over town without debate, at no cost and profit millions, with no input from impacted residents, and have the local government kick in millions to start them up while taking a big financial hit yearly?Are you kidding? No accountability?Think of what the city could do with the money spent funding these guys?

BiKi bikes are used by students, lower income people and the green crowd. There is definitely a place for a bikeshare program like BiKi on Oahu. The car crowd, business owners and NIMBYs (Diamond Head/Leahi etc.) will always oppose bikeshare stations that take up public parking and sidewalk areas. They will whine that bike lanes are taking up too much on public roads etc. Etc. The City and BiKi can come to an agreement on rent but please donât bash bikeshare programs.