Denby Fawcett: Some Want Permanent Security Barriers At Capitol, But At What Cost? - Honolulu Civil Beat

Fencing and blockades mar the open spaces of one of the most beautiful buildings in Hawaii and reduce public access to the workings of government. 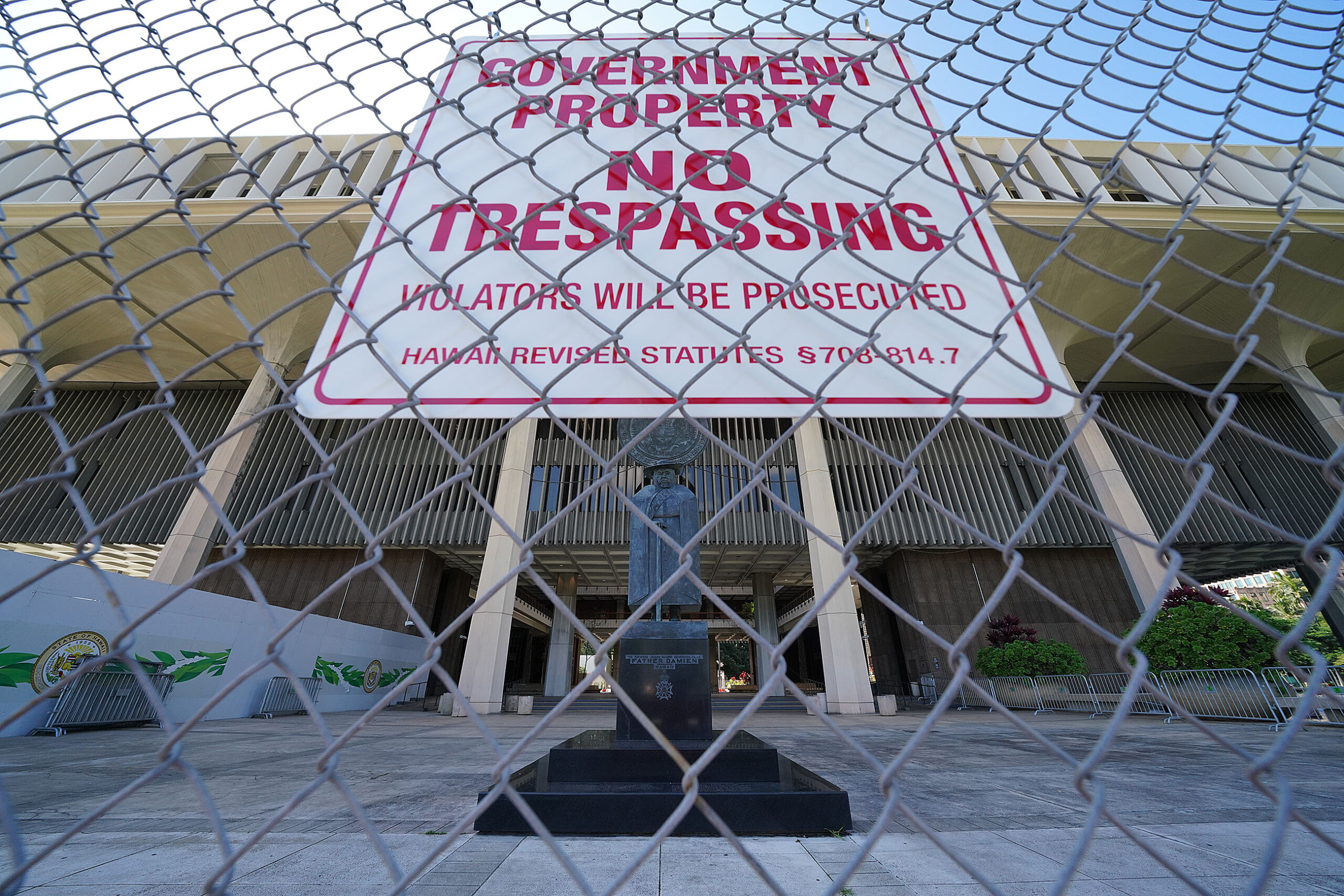 The Hawaii State Capitol  — designed to be the most open of all capitol buildings in the United States — today is surrounded by barriers.

The statue of Father Damien by Marisol Escobar at the Beretania Street entrance gazes out forlornly from behind the chain link fencing like an inmate in a prison exercise yard.

It’s not a pretty sight. The barriers were erected last week in response to an FBI report warning of violence at all state capitols in the days leading up to the inauguration of President-elect Joe Biden on Wednesday.

So far, there have been only peaceful protests at the Capitol and the Hawaii Department of Public Safety in a news release says its sheriff’s division “has not received word of any credible threats to Hawaii’s Capitol Complex.”

The seven-foot high fences at the Capitol are supposed to be temporary — to be removed after Jan. 22.

However, at least two state lawmakers say they will be introducing legislation for security to be increased at the Capitol permanently with metal detectors at all entrances to detect weapons and barriers on the Beretania Street side of the building to keep a terrorist from driving into the rotunda.

Sen. Chris Lee says additional security precautions at the Capitol are needed now more than ever in today’s climate of profound political division and violent outbursts ginned up by misinformation on the internet.

However, he does not want security like the ugly fencing up at the Capitol now.

But a salient question is at what cost does the need for safety barriers mar the open spaces of one of the most beautiful buildings in Hawaii and reduce public access to the workings of government?

Common Cause Hawaii Executive Director Sandy Ma says, “It is a sad state of affairs when we are looking to adopt such barriers in the name of public safety when the effect is to keep the public away from elected officials.”

The 5,000-member Common Cause Hawaii is a nonprofit dedicated to making sure government serves the people, not just private interests.

Ma says that while she is aware of the need to protect all people working in the State Capitol, a balance must be worked out when “Hawaii already has many hurdles to public access.”

She is especially concerned by Lee’s proposal to prohibit public parking in the Capitol building which she says would make access difficult for people who can’t walk long distances and people with disabilities.

Lee argues that increased security would enhance public access by making people feel safer to air their views without fearing physical violence from extremists who want to silence them.

“I want to have additional security while maintaining the sense of access and openness the Capitol was originally designed to promote,” said Lee, in a phone interview.

In his address to the Legislature on Feb. 23, 1969, Gov. John Burns captured the open spirit of the then-new Capitol building saying, “The open sea, the open doorway, open arms and open hearts — these are the symbols of our Hawaiian heritage … it is by means of the striking architecture of this new structure that Hawaii cries out to the nations of the Pacific and of the world this message: ‘We are a free people … we are an open society … we welcome all visitors to our island home.’”

In 2019, Lee failed to pass similar legislation asking for more security at the Capitol.

He expects his measure will pass this year because of recent violent events in public buildings including a state sheriff allegedly killing a homeless man in the Capitol rotunda in 2019.

He also noted that due to “increasing threats even in Hawaii from extremists, the plot to kidnap the governor of Michigan, and the mob overrunning the U.S. Capitol, I think there’s a good chance for action this year because everyone wants to make sure there are basic safety precautions in place to protect our staff, and especially to make sure the public is safe.”

In a climate fraught with fear after the deadly rampage at the U.S. Capitol Jan. 6, you have to wonder if any government building can ever again be open on all sides like Hawaii’s Capitol.

Rep. Gene Ward says he will be introducing his own bill this session for more security after he tried unsuccessfully in 2016 and 2018 to gain approval for bills to create a security master plan for the Capitol.

Ward called what is happening nationally “a wake-up call.” He says that Hawaii is way behind what other states already have done to protect their capitols.

“We can’t turn a blind eye to the lack of security that has been facing us for years. It is good to have openness but we should not be naïve about safety precautions,” he said in a phone interview Saturday.

Ward says even with the current public access restrictions at the Capitol during the coronavirus pandemic, there has been plenty of opportunity for public engagement with lawmakers by phone calls and emails.

“In the past, the only people who were here in person most of the time were lobbyists,” he said.

The temporary barriers at the Capitol now will serve the additional purpose of making clear that the public is barred from the normally festive Hawaii Legislature that opens Wednesday.

This year due to safety precautions and the pandemic it is closed to the public except for the invited family members of the lawmakers.

Times change. Hawaii is not the free-spirited, optimistic place it was in the 1960s when the State Capitol was built.

The islands along with the rest of the world are in the throes of a global pandemic and part of a nation torn apart by violent cultural and political divisions.

Before moving ahead with extreme security measures to restrict access to the State Capitol, it is important for policymakers to move slowly with input from architects, artists and security experts on how to meet today’s security needs without sacrificing the beauty and openness that makes most of us feel good every time we pass by the building. 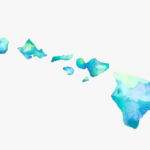 Its been nearly 26 years, since Tim McVeigh set off an explosion that crushed the Alfred P. Murrah Federal building in Oklahoma City.  Honolulu not be left out of the aftermath, decided it needed to barricade it's Federal Building on Punchbowl St.  Since then the Federal government has increased it's tracking and the distribution of bomb making materials like the Ammonium Nitrate used in the bomb.  What hasn't changed is the alignment of Halekauwila St., which eliminated public parking and installed ugly cement guardrails that remain to this day, even though there is absolutely no threat to the building.  This ploy by government officials to spread fear and cut off public access to government is reprehensible.  Our feeble state legislators want us to believe that what happened 5000 miles away under completely different circumstance is almost immanent here and so we need to spend money the state doesn't have to protect them and shut the public out of having access to government.  That's not only wrong, but just BS.  Don't believe the hype, as we will end up with another Federal building sham and no access to the peoples house.

Times have changed, and it will continue to change.  More security is sorely needed at our Capitol.  So let the experts and architects find a reasonable solution that respects democracy while keeping our representatives and citizens safe from harm.

None of us likes the idea of losing what we once had, be it not having to wear masks or open access.  I remember the old Hilo airport, a three foot tall chain link fence separated planes and passengers from those greeting an arriving passenger or those bidding Aloha to a departing passenger.  The  TSA with attendant requirements are an example of what we have lost.  The world is a different place and discourse seems to be the new "Normal" .  No to chain link fencing, but wrought iron is inevitable, unfortunately, itâs just the way it has become.