How One Local Food Program Is Helping Hawaii's Farmers And Families

DA BUX offers a model worth replicating — and expanding. 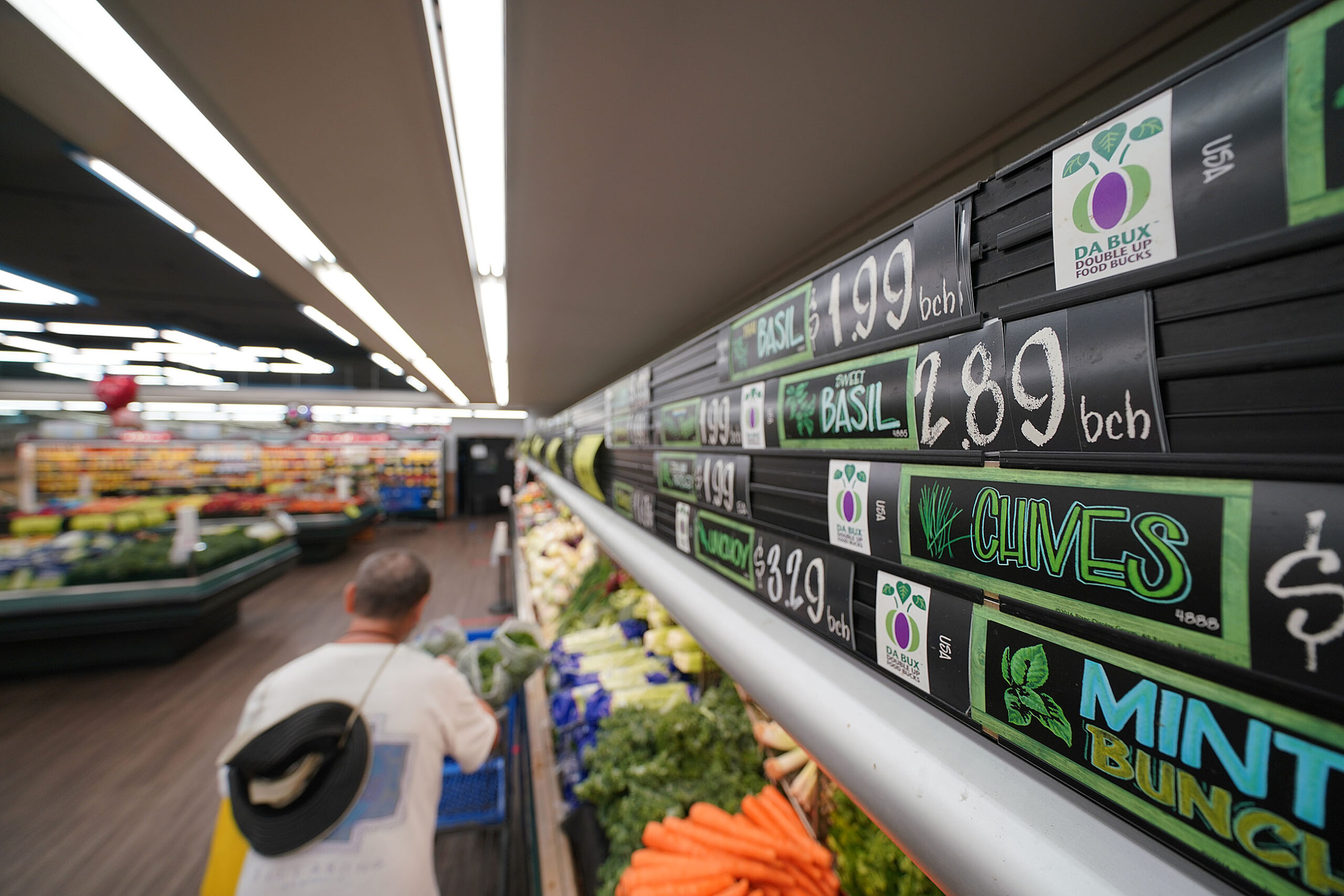 When Dawn Marquez goes grocery shopping at Shima’s Supermarket in Waimanalo, her children aren’t just in tow — they’re leading the charge toward their favorites. Her 7-year-old son Laakea makes a beeline for the cucumbers and her 6-year-old daughter Lilinoe heads for the apple bananas.

Dawn attributes their choices to a program called DA BUX, which doubles the value of government food assistance when that assistance is used to buy qualifying local food items, like the cucumbers and apple bananas her children now seek out.

The “Double Up Food Bucks” program launched nationally in 2014. It arrived in Hawaii as DA BUX in 2015 with a pilot program at farmers markets on Hawaii island.

In 2017 a federal grant expanded DA BUX on Hawaii island. In 2019 the program expanded to all islands. It’s administered locally by The Food Basket in partnership with the Hawaii Good Food Alliance and runs in conjunction with the federal Supplemental Nutrition Assistance Program, or SNAP.

Here’s how it works: Through DA BUX, SNAP benefit dollars — what used to be known as food stamps —  are doubled when they’re spent on qualifying local food items at more than 70 participating retail locations statewide. Those items tend to be the sorts of foods Dawn now seeks out to place in her shopping cart: items like cabbage, kimchee, luau leaves, watercress, green onions, poi, oranges, tofu and tomatoes.

Even before the pandemic upended so much in the islands, DA BUX was succeeding. Now more than ever, it is changing lives for the better in four very tangible and important ways:

DA BUX is a program that works — and that should be expanded.

It’s well documented that COVID-19 has placed staggering financial strain on Hawaii’s farmers and other food agriculture producers, many of whom sold largely to hotels and restaurants prior to the pandemic.

Multiple restrictions and drops in customer sales have led those businesses to decrease their purchases from local farmers and ranchers, with some scaling back operations or downsizing their workforce.

Before the pandemic, there were approximately 7,328 farmers across the state and only 6% of them had a net income greater than $50,000. Even when the visitor industry was growing, many local farmers operated at a loss — an estimated 57% of them in 2017.

Farms in Hawaii are, on average, three times smaller than farms on the continental United States, which means that local farmers have a hard time matching economies of scale.

Many local grocers require large and consistent volume, which only 5% to 10% of local farmers currently provide. CSA programs, which help consumers engage farmers more directly, help but do not entirely make up for losses.

It’s not just farmers having a hard time. Consumers are too. Food costs in Hawaii are 82% higher than the national average and Hawaii imports approximately 90% of its food.

This over-dependence on food imports subjects residents to added shipping costs and external market fluctuations. It also threatens the sustainability of food producers throughout the islands and places the entire population directly at risk of food shortages in the event of natural disasters and economic disruptions.

Not only does Hawaii have the highest cost of living in the nation, over the course of the pandemic the state has gone from having one of the lowest unemployment rates in the United States to having the country’s very highest: 14.3% in October 2020.

Even before the pandemic, 11% of Hawaii’s population received SNAP benefits.

In 2020, the number of people enrolled in SNAP increased enormously and Hawaii’s farmers sustained significant losses.

Meanwhile, local agricultural food producers have been losing an estimated $2 million in sales per week as a result of the shutdown of restaurants and hotels.

DA BUX is changing this picture.

Times Supermarkets, which signed on last year as the second major supermarket chain to participate, noted that supporting DA BUX would both encourage SNAP beneficiaries to make healthier food choices and help Hawaii’s farming industry. Said Times’ president Chris Borden at the time, “This initiative addresses two growing concerns that our community and lawmakers here in Hawaii have been struggling with for a very long time.”

Farm Link Hawaii joined DA BUX in October 2020. Founder and CEO Rob Barreca notes, “SNAP and DA BUX have been incredibly important to enable low-income households to support their local farmers and ranchers … SNAP recipients can order produce, dairy, eggs, meats, seafood and more on our online marketplace and pay using EBT at our pickup locations in Kalihi and Haleiwa.”

A side benefit of DA BUX is the better placement that local grocers now give to local food producers, which helps ensure customers are aware of those products.

On Hawaii island, the Hawaii Ulu Cooperative lost virtually all of its food service customers between March to November 2020 and even saw some of its customers go out of business.

Shapiro recently noted that pre-pandemic the co-op was 95% dependent on food service customers and that it has learned the hard way not to have any single customer or even customer segment (such as food service) make up the majority of its sales.

DA BUX Is Worth Replicating

Last fall, a combined commitment of $500,000 from philanthropic partners was matched with another $500,000 commitment by the State of Hawaii, raising a total of $1 million to grow the existing DA BUX program.

Those who joined the Stupski Foundation and Ulupono Initiative in this private-sector match included the Harry and Jeanette Weinberg Foundation and Kamehameha Schools. The program also accepts monetary donations through The Food Basket.

Based on the projected spend-down rate, current funding of the DA BUX program will last through June 2021.

As Hawaii’s leaders consider further appropriations or application of available federal COVID-19 relief dollars to continue and even expand DA BUX, we urge leaders to consider the multiplier effect of this important program as well as the incalculable benefit to the long-term health of Hawaii’s future.

At Shima’s check out, Marquez is intensely grateful for the program.

She joined early in the pandemic, after her employment at Iolani Palace was interrupted on March 23. She attempted to go back to work on May 6, but another shutdown followed. Adding to the uncertainty and budget tightening was that unemployment took months to kick in.

“As a family we eat better and if we buy local and keep money in the economy, farmers and locals benefit,” she says. The added value of her shopping dollars averages around $15 to $20 each time she visits the grocery store and sometimes totals as much as $40.

Marquez appreciates the focus on fresh local produce for another reason: health. As a diabetic, she says, it’s important for her to keep her sugar levels in check. Sweet potatoes in particular are a good alternative to rice, along with Manoa lettuce for the occasional lettuce wrap.

The added savings also means being able to put those extra funds somewhere else, like buying better proteins instead of cheaper processed meats.

“It made us be more innovative,” she says. She now cooks with her kids, time that has allowed them to grow closer and even take advantage of the learning opportunities in measuring out and completing recipes.

To Laakea and Lilinoe, the so-called new normal is simply the norm. The habits they are forming today, in the food they seek out and value, will shape that future and their part in it. 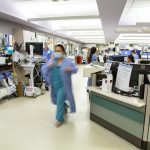 Itâs a wonderful program but many of us on the Big Island canât take advantage of this program. Those of us in the Ocean View area often have no transportation and the nearest grocery store that offers this service is the KTA in Captain Cook. The Kau area has a large number of kupuna and poorest folks on the island. Many here canât even access the monthly food drop locally as well. You have to have internet to find out when  food or even testing for covid is happening. There are a lot of people falling through the "safety net" out here.

Da Bux should continue beyond June 2021 and expand eligibility to include others who may not qualify for food stamps. These folks are undergraduate and graduate students who have minimal income by depending on family support, individuals making less than $75,000 annually before tax, and anyone traveling more than 15 minutes by foot from their home to a participating retail location of the program. Not only should the government encourage consumption of produce via Da Bux, letâs get more folks walking or bicycling when they go shopping. Da Bux is worth funding and expanding instead of wasting money on the Hawaii Agribusiness Development Corp.

prior to "the Bux" buying poi was a luxury item, and so were many of the other items. Big mahalo to the farmers, and I hope you are being rewarded too.