Anti-nuclear protesters carrying on a legacy of activism join with Pacific Islanders who carry a legacy of loss. 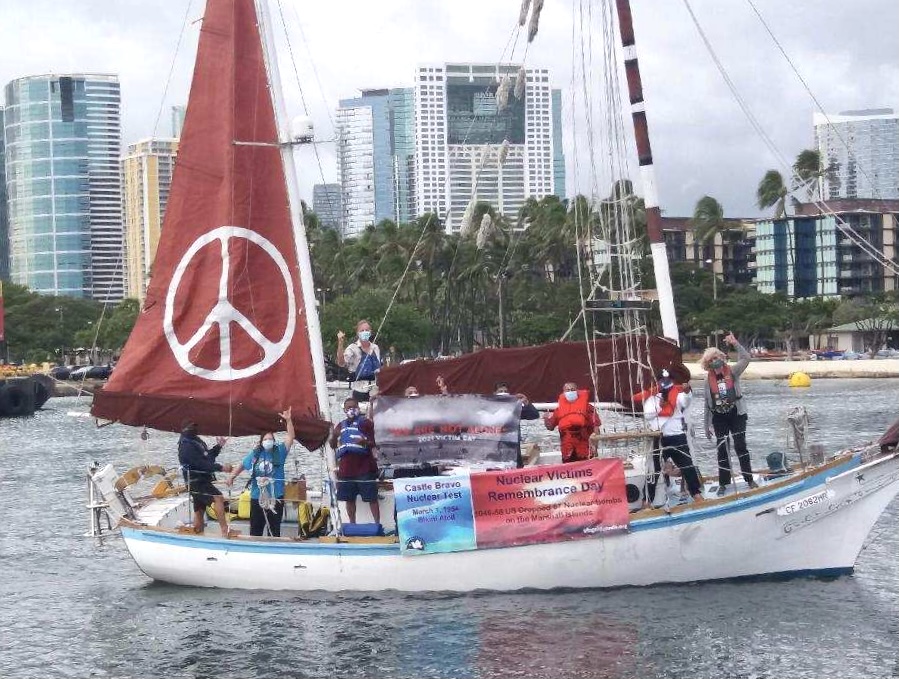 Over 60 years ago, the Golden Rule sailboat and its dedicated crew of volunteers braved the seas to protest nuclear weapons being tested in the Pacific.

For 75 years, the people of Bikini in the Marshall Islands have been waiting to go home after they were moved off their island so the United States could have a target for nuclear weapons testing.

This week, members of both groups joined together for a protest and commemoration that they described as both heartbreaking and uplifting.

March 7 is Bikini Day, marking the day in 1946 when 167 people were asked to leave the island so America could test its bombs. Last Monday, about 30 of their descendants now living on Oahu gathered at Magic Island with members of the Veterans for Peace Golden Rule project.

It was part protest, part memorial, part summit between activists who have worked against nuclear weapons and people who are still, generations later, working to reclaim what was lost in all that destruction.

“On March 1st every year, we respect the memory of the people who endured the Castle Bravo nuclear blast on Bikini Atoll which not only evaporated an island, and destroyed the beauty and purity of Bikini Atoll, but also forever affected the people living on Rongelap, Utiri, Likiep, Wotje and other islands at the time of the blast. Rongelapese saw the brightness in the sky that early morning of March 1, 1954 and caught and played with the nuclear flakes landing on their and their islands … Today, just 4 workers live on Bikini Atoll, no one else. Of those 167 people who left Bikini that day, only 11 are still alive. Just over a week ago, Bubu Tomaiea, who the US removed from Bikini in 1946 when she was 9 years old, just passed away. She would have been 84 years old on March 9th. She longed to be back on Bikini, but sadly her wish did not come true.”

Barbara Cooney, volunteer for the VSP Golden Rule project, organized the event. She wasn’t sure who would show up or how the day would play out, but it turned out to be both casual and powerful.

About 30 Bikinians joined about 20 Golden Rule supporters and other anti-nuclear activists. The Bikini children sang the anthem that was written after their ancestors were forced to leave their homeland, and Nixon Jibas translated the lyrics for the English-speaking participants:

No longer can I stay here, it’s true

No longer can I live in peace and harmony

No longer can I rest on my sleeping mat and pillow

Because of my island and the life I once knew there

The thought is overwhelming.

Rendering me helpless and in great despair

My spirit leaves, drifting around and far away

Where it becomes caught in a current of immense power

And only then do I find tranquility

“It has been many, many long years that the Bikinians have been singing that song. Bikinians just want to go home,” Jibas said. ‘They dream for the day they can lie down on their sleeping mat and pillow, on the beach in Bikini on a cool night with a glorious sunset over Bikini Lagoon.”

After the informal speeches, crew members took Bikini delegates on a sail in the waters off Magic Island. COVID-19 rules allowed for 10 people on the boat, so that limit was strictly followed. “Our boat is called the Golden Rule,” Cooney said. “What else could we do?”

The sail ended up being a fun ride in brisk winds.

“The group on the land were waving to us on the boat and we were waving back to them. It was quite fun. I mean, a fun way to commemorate a protest, I think,” Cooney said.

After the 15 megaton Castle Bravo weapon — a bomb more powerful that those dropped on Hiroshima and Nagasaki — was dropped in the Marshall Islands in 1954, a group of Americans was outraged and vowed to stop nuclear testing in the Pacific.

In 1958, the crew of the Golden Rule left California to attempt to sail to the U.S. nuclear testing site in the Marshall Islands. The Coast Guard boarded the vessel in Honolulu and the protesters were jailed, but their actions brought attention to anti-nuclear protests and according to National Geographic, “initiated a tradition of protest boats carried on most notably by Greenpeace.”

Many years later, Golden Rule was restored by the group Veterans For Peace. In recent years, it has sailed along the U.S. West Coast to educate communities about the threat of nuclear war. In August 2019, Golden Rule sailed to Hawai’i and the plan was to continue on to the Marshall Islands, but pandemic travel restrictions canceled that voyage. The small sail around Magic Island, however, was a satisfying alternative.

“It was so mutually gratifying, both for the peace workers and the Golden Rule project and for the Bikini people who were affected by what happened,” Cooney said. “We were grateful for each other. It was very personal.” 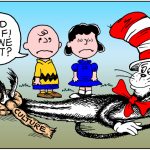 Nuclear technology is part of man's relentless scientific progress.  Like all the other discoveries, this one is a genie out of the bottle now.  The danger today is proliferation to totalitarian regimes such as the Islamic Republic of Iran and the Democratic People's Republic of Korea.

Thank you for the story.  There was a growing dive tourism program on Bikini more than a decade ago.  Some how the Bikini local government and the Marshall Islands government did not exploit the opportunity.

"Destroy a village to save a village"This sums up the US policy of "Mutual Assured Destruction" to save the world from all those who dare to disagree with the US way of life. A US life style where the planet suffers from overconsumption, the rich get fabulously rich and don't pay taxes, while country dives deeper into debt and poverty grows spilling out onto the streets. Exceptionally armed with a foreign policy that liberally bombs the world daily to bring freedom or death whichever may come first. The collateral damage of this scorched earth policy, that destroyed Bikini and mistakenly bombs wedding parties in Iraq, is ignored by policymakers and the public, while journalists that point out this inconvenient facts, like Assange, Snowden, Manning are prosecuted.I thank Ms. Cataluna for shining a light on this small handful of people with feelings of concern for the victims of US foreign policy, and are not manipulated or calloused by "love it or leave it" nationalism.