For years, residents of Waimea have tried to reclaim a historic site for what it really was. 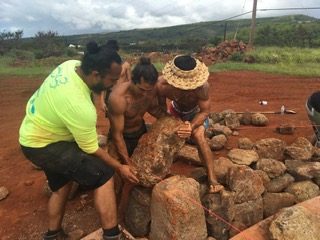 After years of working toward the day, looking forward to the moment when the King’s presence would be returned to his ancestral home, Aunty Aletha Kaohi awoke to gray skies.

“There was rain, ua liʻiliʻi, a spiritual rain. Very light,” said Kaohi, a revered elder and historian from Waimea, Kauai. “I kept asking the ancestors to clear it so we could get this done.”

Kaohi and other community members formed Friends of King Kaumualiʻi in 2012 with the goal of re-claiming the site that has been known as “Russian Fort” and re-establishing the original name of the sacred area, Pāʻulaʻula. Kauai’s King Kaumualiʻi was raised there by his mother, Chiefess Kamakahelei, and it was the site of two ancient heiau as well as the burial place of alii.

In contrast, the “Russian Fort” name wasn’t attached to such deep history. In the early 1800s, a Bavarian doctor working for a Russian trading company struck a deal with Kaumualiʻi to build a fort in the area with promises of help from the Russians to defend the island against invaders. Hawaiians built the fort, but Russians never occupied it. Instead, it became a place Kaumualiʻi and his royal government used and defended in battle. In 1970, it became a state park and was called “Russian Fort Elisabeth” despite its brief, tenuous association with Russia.

Friends of King Kaumualiʻi began an education campaign to remind Kauai what the island’s last independent king did and what he believed in. Kaumualiʻi brokered a deal with Kamehameha I to annex Kauai rather than go to war. Kaohi teaches Kaumualiʻi as a peace-loving King, a strategist and a diplomat who chose peace over war to spare his people.

The group decided to erect a statue to Kaumualiʻi, thus reclaiming the site, which is on the makai side of the road just before entering Waimea on Kauai’s west side. The group received a state grant-in-aid of $220,000 in 2018, and commissioned artist Saim Caglayan to create an 8-foot statue based on a depiction of Kaumualiʻi by painter Brook Kapūkuniahi Parker, which appears in the book “Arm Wrestling Kamehameha” by Lee Croft.

Before the statue could be placed at the site, a group of 65 community members gathered to build a proper base. Some of the kupuna who were there had been involved in trying to restore the original name of the site since the 1980s.

On March 12, the day the statue was to arrive at the Waimea site from where it had been kept on the North Shore, the group gathered to witness the process looked nervously at the skies. Just as the truck carrying the statue turned into the area, the clouds opened up and the rain poured down.

Westside Kauai is the dry side of the island, but when it rains like that, it’s a deluge and mud puddles quickly turn into lakes. The soil is so rich, it forms a sticky mud. The crane that was to lift the statue onto the base got stuck in the mud. There was no way to get the statue close enough to place it onto the base. Crews from Kikiaola Construction had to MacGyver a forklift to push the crane into position. Then finally, finally the statue was lowered into place.

“It was a real story of menehune magic,” said Maureen Fodale of Friends of King Kaumualiʻi. “Menehunes from Kikiaola got it done.”

The people gathered around the statue decided it sure looked like Kaumualiʻi was smiling. Together, they recited his name chant, which they suddenly realized spoke of the rain that is the welcome for the king.

“He kanaka kūhea hale ka ua,” Kaohi said. “Rain is the person who calls welcome to the house. It all made sense. He was home.” Kaohi is a direct descendant of King Kaumualiʻi.

On Saturday, a small blessing ceremony was held to mark the re-dedication of the archeological site. The event was limited to a small number of attendees due to COVID-19 safety protocols, but was videotaped for a virtual presentation that will be released later this month.

The statue is in place but the work is not over. The Friends of King Kaumualiʻi group will continue their education and awareness campaigns, sponsoring art contests and song compositions, speaking to students and community groups.

A moment that happened years ago still sticks with Kaohi. She was once invited to speak to a group of fourth graders on the island and asked the students if they knew anything about Kaumualiʻi. She was dismayed when the best answer she got was from a bright-eyed child who called out, “Highway 50!”

She was determined at that point to make Kauai’s king known for more than that. 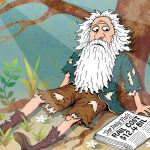 This saddens me about our island. We are so desperate to be proud of something we glorify a dead king. How is this inspirational? A king is born into royalty. You cannot attain it thru intelligence or hard work. It's just dumb luck. We need statues of great ideas or achievements. At least the statue of Captain Cook in Waimea is of a man who changed the world; someone who made something of himself from modest common beginnings. Isn't that more inspirational?As Hawaiians we need to look at science or art or technology as places to find inspiration. Find a better way to harness electricity from the tides. That is our future. Even America only became powerful when they broke with their royal past. Statues of royalty do nothing for our future.  (Klayton Kubo Waimea).

There is a backstory and the Russians are not happy about this. The re-naming is more geo-political than this article lets on.