Mary Moriarty Jones says she wants to slow down traffic on Leahi Avenue with 30 new parking stalls, but residents say it's unsafe. 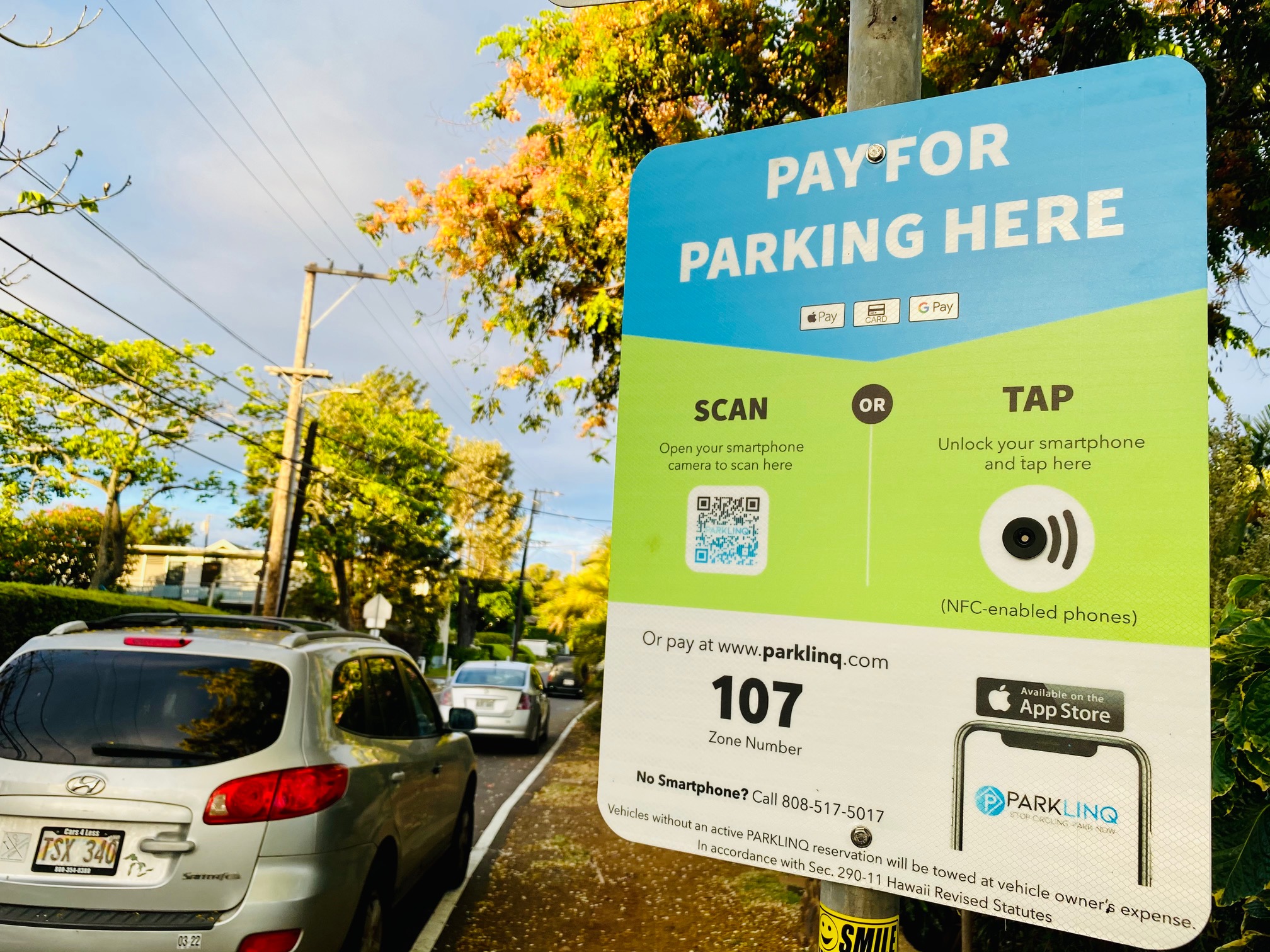 In a phone interview Sunday, Jones said she altered the road last week by creating 30 parking stalls on one side to slow the speeding cars that have made the road dangerous, especially for children attending nearby Waikiki Elementary School.

The 70 who gathered at Pualei Circle to protest were additionally angry that, beginning Monday, Jones began to charge for parking in her newly created parking spaces. Up until now, parking on Leahi Avenue has been free.

Jones’ company, Safe Leahi LLC, took over ownership of the stretch of Leahi Avenue from Monsarrat Avenue to Noela Drive in October from its former owner, King Lunalilo Trust.

The trust — wanting to avoid future liability — signed over the section to Jones in a $10 quitclaim deed.

Jones told Civil Beat in November that after four years of frustration, she felt she had no other recourse than to take over Leahi Avenue when the city was asked and repeatedly refused to put in safety improvements — even though city officials were fully aware the road went through a school district where dozens of children walk each day.

She said over the years the narrow road had become a shortcut for speeders and a danger to pedestrians of all ages.

Jones, a Native Hawaiian and a civil engineer, is the mother of two young children at Waikiki Elementary School. She says she gave up trying to walk her children to school because the road was too dangerous.

Curtis Chee, who organized the protest, said Jones’ installation of parking stalls on one side of Leahi Avenue — supposedly to make it safer — has turned it into a one lane road traveled by cars going in two different directions, now having to dodge each other to avoid collisions.

“We are all in favor of creating safer streets and protecting children but this has created chaos,” he said. “It’s a nightmare, unsafe for us to drive.”

Chee is president of the apartment owners’ association of The Gregg Apartments on Pualei Circle.

While he was speaking, cars drove by, some honking their horns. One man yelled, “Give us back two lanes.”

Another driver who said her name was Kylie Brown shouted out of her vehicle at the protesters, “Why are you so selfish? Don’t you care about the safety of the children on this street?”

Protester Nancy Wassman said, “This has gotten us up in arms. It is not making any sense. Leahi needs to be two lanes and free from ridiculous paid parking spaces.”

Wassman, a Pualei Circle resident, said, “I was all for street safety when she bought the road, but this is making our quiet residential neighborhood feel like a commercial parking lot.”

Jones sent out emails on June 8 to the management of the 12 apartment buildings on Pualei Circle, abutting Leahi Avenue, to alert them she would be altering the road to slow down speeders and also charging for parking on one side of the street.

Drivers have to inch around cars in the parking area Jones has created on the makai side of Leahi.

The mauka side of the road remains open as a pedestrian walkway.

Yield movement makes the road narrower and forces drivers to put on the brakes.

Jones says yield movement is a common traffic calming method similar to what drivers already experience on nearby Wilhelmina Rise, Sunset Avenue and parts of Pahoa Avenue and on many narrow roads in Kapahulu and Kaimuki.

Pualei Circle resident Bob Rameyer said this sounds good as a concept but in reality it is creating hazards for drivers on Leahi, some of whom appear confounded about where to pull off to get out of the way of oncoming traffic.

Jones says she is modifying the road as she becomes aware of potential safety hazards and has already removed one parking stall from the front of the community garden and three parking stalls in an area that would have made it difficult for vehicles trying to turn onto Leahi Avenue from Monsarrat Avenue.

“It is one thing to see a plan on paper and another to see it in reality,” said Jones.

Jones said, “I understand that nobody wants to pay for parking but it is the only way to be self-sustaining — to pay for insurance, maintenance and future road safety improvements.”

Some critics at the rally suggested that Jones is motivated less by safety than by money. A couple of speakers claimed Jones and her husband own the company hired to tow cars, Allen’s Towing, and PARKLINQ, the company collecting parking fees.

“I have heard those rumors a million times,” she said. “People love conspiracy theories. My family has absolutely nothing to do with either of those companies.”

Her quitclaim deed from King Lunalilo Trust prohibits her from making any money from the road. Profits can be used only for road maintenance and improvements.

Jones says it’s a shame that only the critics who call news outlets are getting heard, instead of the people who email in favor of what she is doing.

One of her supporters, Joan Ellis, wrote in an email, “I realize some area residents are unhappy about the recent changes, but Leahi Avenue is so much more than just a place to park a car or a shortcut to Paki Avenue. Parents with baby strollers, children, people walking their dogs, and walkers and runners should not have to be constantly dodging speeders to stay safe.”

The protesters say they will urge city officials and City Council members to stop Safe Leahi’s road changes and end its quest for parking fees.

Jones says rather than trying to vilify her, the critics should take their protest to Honolulu Hale to reprimand the city for failing to carry out its duty to assure the safety of public roads next to schools, parks, and residences.

“Protesters should demand that the city start managing and improving this and many other private roads in Honolulu,” she said.

But the city says that under current law it is prohibited from managing Leahi Avenue because it is a private roadway operating under its own rules and regulations.

In an email Monday, spokesman Tim Sakahara said: “The City has been in contact with Safe Leahi, LLC’s attorney of record and understands that the company is not presently interested in conveying the roadway to the City … The City remains open to further discussions with Safe Leahi, LLC.”

Jones said she is surprised and pleased to hear the city express interest in taking over Leahi Avenue because that option has never been offered to her before from any city official. She says she welcomes the city’s openness to have further discussions with Safe Leahi about the future of the road. 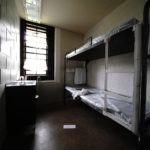 This is what news reporting used to be like.  Facts, lots of facts.  Both sides.  No slant.  Sad that it stands in such stark contrast to most "news reporting," not just in Hawaii.  I happen to know Mary, and that tilts me a bit in her direction.  That is, in my experiences with her over many years she has shown herself to be both competent and well-intentioned.  As best I can tell, there are self-interested people on opposite sides of this street/parking issue.  The complainers now are used to free parking; I get that.  The moms of little school kids like the now-safer conditions; I get that.  Mary is gutsy to take this on; I get that.  Some problems donât have a right answer.  Congrats to Mary and to Denny for standing tall in a place where most people just go along.

Although different in purpose and intent, this private roadway scenario is similar to the Chun brothers who took over numerous Kaka'ako streets for profit.  These private streets, maintained by the city, where high jacked by the Chun's so they could collect parking fees for years.  The real issue is the city adopting these streets and maintaining them for public use, as even private roadways become public thoroughfare if they are used by the public, without limitation for a certain amount of time.  Leahi qualifies as a public street because it has been used for decades by the public.  The city does not want to adopt streets that do not meet city standards of width, sidewalks, storm drainage and the like.  This is the reason why Kaka'ako's busy side streets remain private.  It's time the city adopt, improve and maintain these streets, or simply deem them private, put up gates and like Ms. Jones, let someone charge for usage and improvements.  It will take years of parking fees to build enough capital to widen and improve Leahi St.  It really is the city's responsibility to do it for the public good.