Sports Teams Should Not Be Using Indigenous Names And Identities

Names like the Atlanta Braves and the Cleveland Indians reinforce oppression and discrimination.

Justin Mark Hideaki Salisbury, from Honolulu, is a blind person, teacher of the blind and leader in the organized blind movement. He is best known for his work in disability rights, but his political activism has also spanned education, labor, environmental, women’s rights, LGBT rights and other areas, as well.

I am a teacher of the blind, and I am also American Indian, Irish and a few other ethnicities. Some traditional American Indian men gravitate toward helping professions, such as counseling or education, where being stereotypically stoic and warlike is not desired by most hiring committees.

I will always wonder if the stereotypes incubated by racist team names, logos and mascots influenced some employers’ decisions not to hire me or how much money to offer me. I don’t want my children to wonder the same thing.

I don’t make this about getting offended; instead, I want to focus on oppression and discrimination as facts that we can change. When people try to summarize our opposition to the racist names and iconography by saying that we are offended, this stokes settler colonialist fear.

The logic goes something like this: If the indigenous people are offended, they might get angry, and they might do something to retaliate against us, so we have to keep them under control. This reinforces our oppression.

The Washington football team’s recent name and logo was the most frequently discussed because it was an outright racial slur, but we also see similar issues with the Kansas City Chiefs, the Chicago Blackhawks, the Cleveland Indians, the Atlanta Braves, the Kahuku Red Raiders, the Florida State Seminoles and many others.

I grew up supporting professional sports teams with American Indian team names and logos. In my family, we did not understand our own oppression, and we were actually contributing to it. I can remember my own Washington Redskins gear as a kid. Somehow, I liked the logo.

What I do not like is running into the stereotypes every day.

Some mascots do not directly reference a minority but still promote white settler colonialism. The San Francisco 49ers identity is one example.

We often forget the historical context. The hyped-up gold rush that led working-class white settlers to get into their covered wagons and journey west in search of gold was largely a tactic of the wealthy elites to get the working-class white people to pay the personal costs of carrying out genocide and whitening the American West. The 49ers went west with hearts full of greed for the riches of the land.

Teams with  names like the Cowboys, Miners and Vikings also celebrate white settler colonialism. The Buffalo Bills’ identity comes from Buffalo Bill Cody, who used military resources to kill off the bison (“buffalo”) on the Great Plains, starving American Indians onto reservations. He received accolades for personally killing and scalping Indians.

My brother had a Buffalo Bills helmet as a kid.

Occasionally, we are entertained by a face-off between a mascot celebrating white settler colonialism and an indigenous mascot. This romanticizes only one part of our history, and it leads a lot of people — settler and indigenous alike — to think of our indigenous people as a uniform bunch of warriors.

This keeps the focus only on the attacks through which the colonizers supposedly won their entitlement to our land. Indigenous people were then and still are full human beings with a full spectrum of personality traits.

The mascots are one part of the web of racism, which feeds stereotypes, which affects our implicit bias. I believe these stereotypes are applied to Native Hawaiians, too, even though Native Hawaiians are not and do not want to be labeled as American Indian. If a Native Hawaiian man makes eye contact with us without smiling, are we maybe a little bit more likely to perceive him as angry than we would be if he were haole?

We often make these kinds of judgments without realizing or intending it, but sports teams that have adopted indigenous identities keep the stereotypes alive.

I think it is wonderful that Kahuku made the decision to retire its Red Raiders mascot. I would love it if policymakers could find a way to ban indigenous mascots from K-12 athletics in Hawaii.

I also wonder if we can ask a civil rights oversight agency, like the Hawaii Civil Rights Commission, to issue formal guidance that indigenous mascots constitute racism and can be evidence for hostile work environment complaints. This change might help us to create workplaces with less racism.

This column is only my manao, but I personally feel like there is prejudice against me in my workplace if Kansas City Chiefs and other indigenous football apparel is being displayed and worn around me. 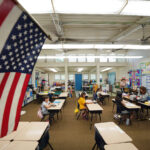 Eric Stinton: Teachers, Don't Be Shy About Talking To The Media

Justin Mark Hideaki Salisbury, from Honolulu, is a blind person, teacher of the blind and leader in the organized blind movement. He is best known for his work in disability rights, but his political activism has also spanned education, labor, environmental, women’s rights, LGBT rights and other areas, as well.

I don't agree with the writer at all.  It's about sports and creating a name recognition and fan loyalty.  Sure there are some names that can be considered derogatory by some people, but there are many that would feel the opposite.  If you don't like them, don't support the team or sport.  UH calls themselves the Rainbow Warriors, so who's offended and shall we change that moniker to not offend someone?  I feel issues like this are more a part of this cancel culture and oversensitivity to just about anything.  Really people that are, it's not as bad as you would like everyone to believe.

The pressure is on for teams to abolish nicknames of indigenous people. But Cowboys?To stereotype cowboys as being as a symbol of "white settler colonialism" totally overlooks & marginalizes the existence & legacy of the many African-Americans who worked as cowboys in the cattle/ranching industry. They made up about 25% of these workers during the late 1800s. Do these men not count for something?Let this be a lesson to everyone: Don't be in such a rush to "cancel" something you don't have full knowledge/understanding of.

It feels me with pride when others "appropriate" elements of my culture in a thoughtful and respectful way. When they do so clumsily, I am also happy because it gives me a laugh. Even when they do so in a twisted and overtly disrespectful way, I do not feel offended - on the contrary, seeing someone make a fool of themselves gives me yet another reason to have a laugh. Virtue signaling and manufacturing enemies to deflect attention from the real problems plaguing our society is easy. I would rather make friends.