Vaccine opponents are trying to co-opt the Hawaiian words for love and social responsibility, but their actions irresponsibly undermine public health. 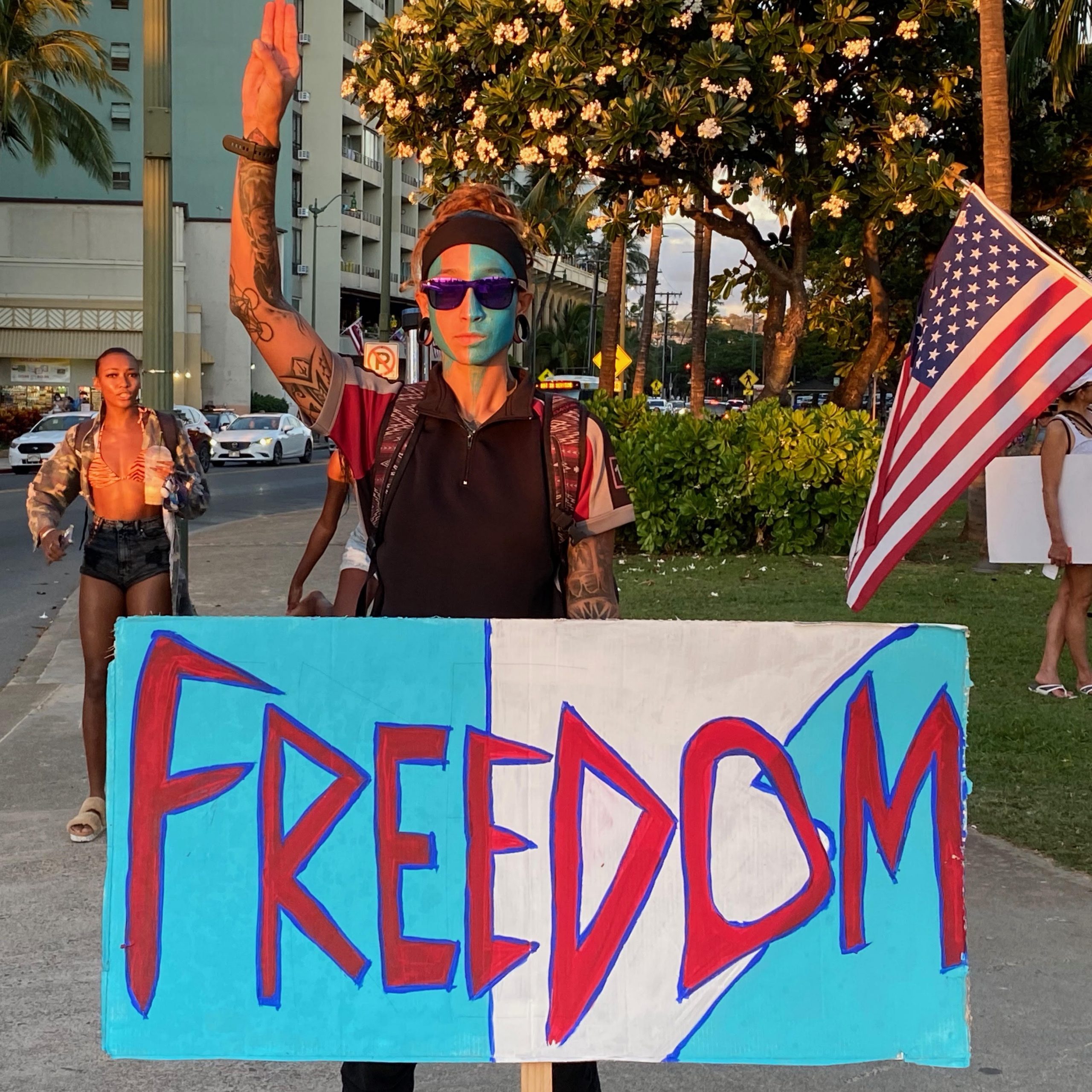 As more and more government agencies and businesses impose vaccine mandates in an effort to reduce soaring Covid-19 infection and hospitalization rates, anti-vaccine activists are becoming more strident and more astounding in their opposition.

And now on social media, the hard-core vaccine resistant are promising new protests against Honolulu Mayor Rick Blangiardi’s announcement Monday that starting Sept. 13, proof of vaccination or a recent Covid test will be required to enter certain establishments on Oahu.

Hawaii’s most vocal vaccine protesters are using the Hawaiian words for love and social responsibility — aloha and pono — in their continuing anti-mask, anti-vaccination, anti-public health campaigns that are anything but safety minded or responsible.

Consider: The Knights of Aloha, Aloha Freedom Coalition and the Pono Coalition for Informed Consent.

Their actions are clearly not pono and clearly not motivated by the sentiment of far-reaching love for community embodied in the Hawaiian word aloha.

The group’s mission statement posted on Instagram is to “maintain freedoms, preserve aloha and protect ohana.”

What kind of aloha is it, when the group espouses masks are useless to prevent Covid-19 when masks clearly work?

How is it protecting ohana when the Aloha Freedom Coalition dismisses mandates to encourage vaccination as a communist plot, like a few of the sign wavers did on Saturday?

It’s not aloha to try to undermine the fact that Covid-19 vaccinations, although not a complete barrier to infection, are the best means available to prevent severe illness, hospitalization and death from the coronavirus.

And how can it be pono for the Pono Coalition for Informed Consent to spread inaccurate medical information while it promotes unapproved drugs to treat Covid, including the anti-parasitic drug ivermectin and the malaria drug hydroxychloroquine?

State Health Director Libby Char, who usually stays out of the fray when it comes to quack medical claims, quickly called out Pono’s false statements as un-pono.

“I want to be clear — hydroxychloroquine and ivermectin should not be used to treat COVID-19. Taking unprescribed large doses of ivermectin or doses intended for animals can cause serious harm,” she said.

State Sen. Roz Baker, in a Senate floor speech on Thursday, called for the state’s top medical adviser for Maui County and Pono Coalition co-founder Dr. Lorrin Pang to be fired after he was quoted as telling the Honolulu Star-Advertiser that he supports the use of hydroxychloroquine and ivermectin to treat Covid-19.

Pang has insisted that he is not against the vaccine and is vaccinated himself, but he also supports doctors who prescribe the controversial drugs for Covid even though the Food and Drug Administration has not approved them for that use.

Lt. Gov. Josh Green, a frequent target of vaccine opponents, said in an email: “I’m concerned that the spread of misinformation discourages our community from getting potentially life-saving treatments, like the COVID-19 vaccines.”

For sure, the spread of misinformation about Covid-19 vaccines is egregious, but even more disturbing is the way some vaccine mandate protesters compare themselves to victims of the Holocaust.

It is easy to criticize this kind of rhetoric but more difficult to understand why such inaccurate and hurtful narratives continue to be advanced.

You have to wonder which political faction got together to say, “We will get a lot of support if we compare the mandates unvaccinated people in the U.S now face to the discrimination and death the Jews faced in Nazi Germany; let’s roll with it.”

John Bennett, the chairman of the Oklahoma Republican Party, posted a video on the party’s Facebook page that equated vaccination mandates to the Third Reich forcing Jews to wear yellow stars in Nazi Germany. Bennett refused to back off his statements after other Oklahoma Republicans slammed him.

Republican Congressman Thomas Massie of Kentucky tweeted that Covid-19 restrictions in the U.S. were like the horrors suffered by Jews in concentration camps during the Holocaust. His tweet featured the image of a tattooed hand.

Georgia Republican U.S. Rep. Marjorie Taylor Greene, a QAnon adherent, was one of the first to try to appropriate the pain of the Holocaust and grossly and falsely analogize it to the supposed discrimination of having to show proof of a Covid-19 vaccination.

“In appropriating deep symbols of Jewish pain, these bad actors undermine not only the gravity, nuance and suffering of the Holocaust, but also of centuries of historical anti-Semitism, in service to their own need to be public martyrs,” she said.

“They cast about for some touchstone for their perceived injustice, landing on the Holocaust as the ultimate exemplar of persecution in the modern era. In so doing, Holocaust-invokers add themselves to a long and sad history of borrowing the pain of others to lend credence to their own.”

Most of Hawaii’s mask and vaccination resistant have not been as fixated with Holocaust references as those on the mainland, although occasionally they grumble on social media that they “feel like they are living under Hitler.”

Such casual offhand comments make it clear they could never understand what it would have been like to live under Hitler and that they have no idea how to show aloha and be pono during the most critical medical emergency of this century. 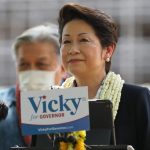 Lee Cataluna: Vicky Cayetano Managed to Stay Out of Politics, Until Now

Aloha to All. I must tell you this comparison to Nazi Germany is totally off base. Now, if Public health officials came to your home, smashed your windows, took all your belongings, forcefully separated your family, tattooed your arm and then gave you the covid vaccine then you may have a gripe. They didn't. You don't. Stop standing in the way of progress, it is quite frustrating.

I am not against anyone getting vaccinated if that is their choice but how can health officials call it life saving if in June of this year before the vaccines were widely distributed, we had less than 100 cases per day and now with 60 plus percent of Hawaii vaccinated, we have over 800 cases per day?  The vaccine passport program will not stop the spread if only unvaccinated people are required to test. Fully vaccinated individuals can just as easily be carriers of the virus and spread it throughout the community. Everyone should be required to get tested regardless of vaccination status. Not all who oppose the mandates are anti-vaxers. Many who oppose the mandates are vaccinatedâ¦they are supporting peoples right to chose. Although Hawaii is its own state, we are still in America where we are fortunate enough to have rights and freedoms like the freedom to make individual health decisions. When the government starts to take those rights away from the citizens, that is a step towards communism.

Because we have different, safer, ideas of how to keep ourselves and our community safe and want the freedom to choose, does not mean we are selfish. As Ronald Reagan said "We are 1 generation away from losing our freedom". I believe it is our duty to defend it. What is the next right you are willing to give away in the name of safety. I have always ask for a 2nd, sometimes 3rd medical opinion. Why now, are we not allowed to hear from other medical professionals with medical degrees and experience. I listen to a variety of opinions and make up my own mind. These brave doctors have nothing to gain by speaking the truth. Sadly, they have lost a lot, their reputation and career.