Lee Cataluna: In Waikiki, The Best Of Times, The Worst Of Times - Honolulu Civil Beat

Lee Cataluna: In Waikiki, The Best Of Times, The Worst Of Times

A longtime Waikiki store owner survived the pandemic shutdown and the summer surge of tourists but still worries about what lies ahead. 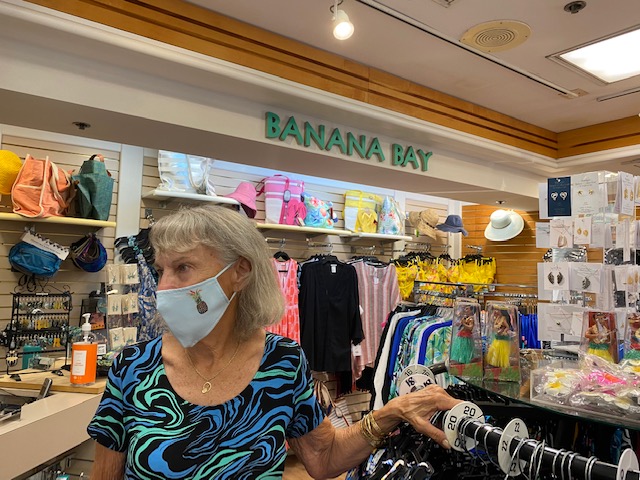 In December, the number of empty storefronts along Waikiki’s Kalakaua avenue was startling. So many businesses could not survive pandemic shutdowns and travel restrictions.

Now, many of those empty spaces are reoccupied with new businesses aiming to catch the huge wave of tourists that swept into the islands over the summer. More ABC Stores have popped up on Kalakaua Avenue, along with some big-name boutiques.

Maureen Kilcoyne’s Waikiki clothing shop is unusual in that it is locally owned, has been open in Waikiki since 1962 and was an original tenant in the Waikiki Outrigger when the hotel first opened. Kilcoyne has weathered many storms.

But in December, Kilcoyne’s Banana Bay boutique was just holding on.

The Waikiki Outrigger was the only beachfront hotel in the area that stayed open during the pandemic, providing rooms to the military and first responders. In June 2020, the Outrigger launched a program of safe-cleaning protocols and offered special rates to Hawaii residents weary of pandemic restrictions and anxious to enjoy a “staycation.”

Banana Bay had mostly local customers during that time. A loan through the Paycheck Protection Program and a grant of $10,000 from the City and County of Honolulu Small Business Relief program also helped keep the little store alive.

Then, vaccines became available, travel opened up and tourists started coming back to Hawaii, arriving in record numbers.

This summer was the best Kilcoyne ever had in all her years in business.

“The lobby was so full with people checking in, you could barely walk through,” she said.

She was able to go back to a full staff of six at the store. Everyone on her team chose to be vaccinated, and as a business owner, Kilcoyne was relieved she didn’t have to decide whether to make it mandatory.

Over the summer, many of the customers she talked to were first-time visitors who couldn’t afford to come to Hawaii before. Discounted airfares and hotel rooms, and an “eat, drink and be merry for tomorrow we may die” attitude borne of nearly a year and a half of pandemic, had inspired them to make the trip to experience paradise.

Over the summer, the line for the popular Duke’s Waikiki restaurant started at the hostess stand, went past the front of Kilcoyne’s store and clear down to the beach. That was just the daily line for reservations. People would wait for an hour and half just to get a reservation, then two to three hours more to be seated. At night, there were so many tourists and buskers on Kalakaua that people couldn’t walk on the sidewalks.

Her stockroom is an extra bedroom in her house. Before the summer surge of business, Kilcoyne had been thinking about turning that room into a fun room for her grandchildren.

Some of the product lines she usually sells in her store were hard-hit by the pandemic and had fewer items to offer. One challenge has been trying to bring in plush toys for the store. They’re just not available.

“Most of them are made in China or the materials come from China, so when China shut down, that affected the supply. I’ve tried to buy from so many different vendors,” Kilcoyne said.

When a delivery of boxes showed up at her store, she eagerly checked the invoices to see if it was an order of stuffed animal toys. (It was.)

But tourism numbers at the level Hawaii experienced this summer were problematic.

“Obviously, since I’m in the tourist business, I don’t want them not to come,” Kilcoyne said, but her customers were saying that they felt Hawaii was too crowded. They also complained that there weren’t enough activities available.

In the last two weeks, the number of tourists in Waikiki dropped in a palpable way. It’s not nearly as crowded and frantic. Visitor arrivals go down every year as summer comes to an end and schools start back in session.

“I’m used to this drop in numbers after summer,” Kilcoyne said. “If it wasn’t for Covid, we’d be fine.”

But the threat of Covid hangs over everything. Kilcoyne worries about the skyrocketing number of Covid cases in Hawaii and whether that will force businesses to close their doors.

Even though she had the best summer ever, she’s not sure she could weather another shutdown this fall.

“A lot of people were just holding on. This was a jolt we didn’t need,” she said. “If this article was written two weeks ago, it would be the happiest story.” 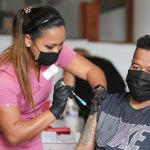 I know it seems like we've had a record number of tourists this year, but we haven't. Data from the HTA show that we've had significantly fewer tourists in 2021 compared to 2019. In June, tourists arrivals were down 16.5% compared to 2019. In July hotel occupancy was down 3% in 2021 compared to 2019, despite lower hotel room inventory (July tourist arrival data are not yet available).I think there are a few reasons for the misperception of "record" tourists:1) We had a year with nearly no tourists, and the contrast now is startling.2) There are fewer businesses and less capacity to serve tourists, due to closures and occupancy limitations, so the businesses that are open are unusually busy.3) There are fewer workers to serve tourists, because staffing has not reached pre-pandemic levels.I think the good news is that these things will correct themselves over time. One thing is certain though - we'll start to see more tourist arrivals from Asia, as well as from cruises, so tourist arrivals are likely to increase in the future.

Economic dependency on tourism is an awful rollercoaster in a pandemic. Dependency is a nice way to put it.But some industries in the pandemic have fared very well. Which are those? Real estate industry and landholders; investment; tech; and even groceries. How can Hawaii build economic resilience?

It's really too bad we don't even try to diversify our economy. It might be "impossible" to replace tourism, but even an extra 20% capacity would help weather the uncertainty.