Denby Fawcett: The Unseen Cost To Taxpayers Of Vaccine Exemptions

State and city governments are allowing their workers to avoid the vaccine for religious or medical reasons, but processing the requests and keeping track of the workers takes time and money. 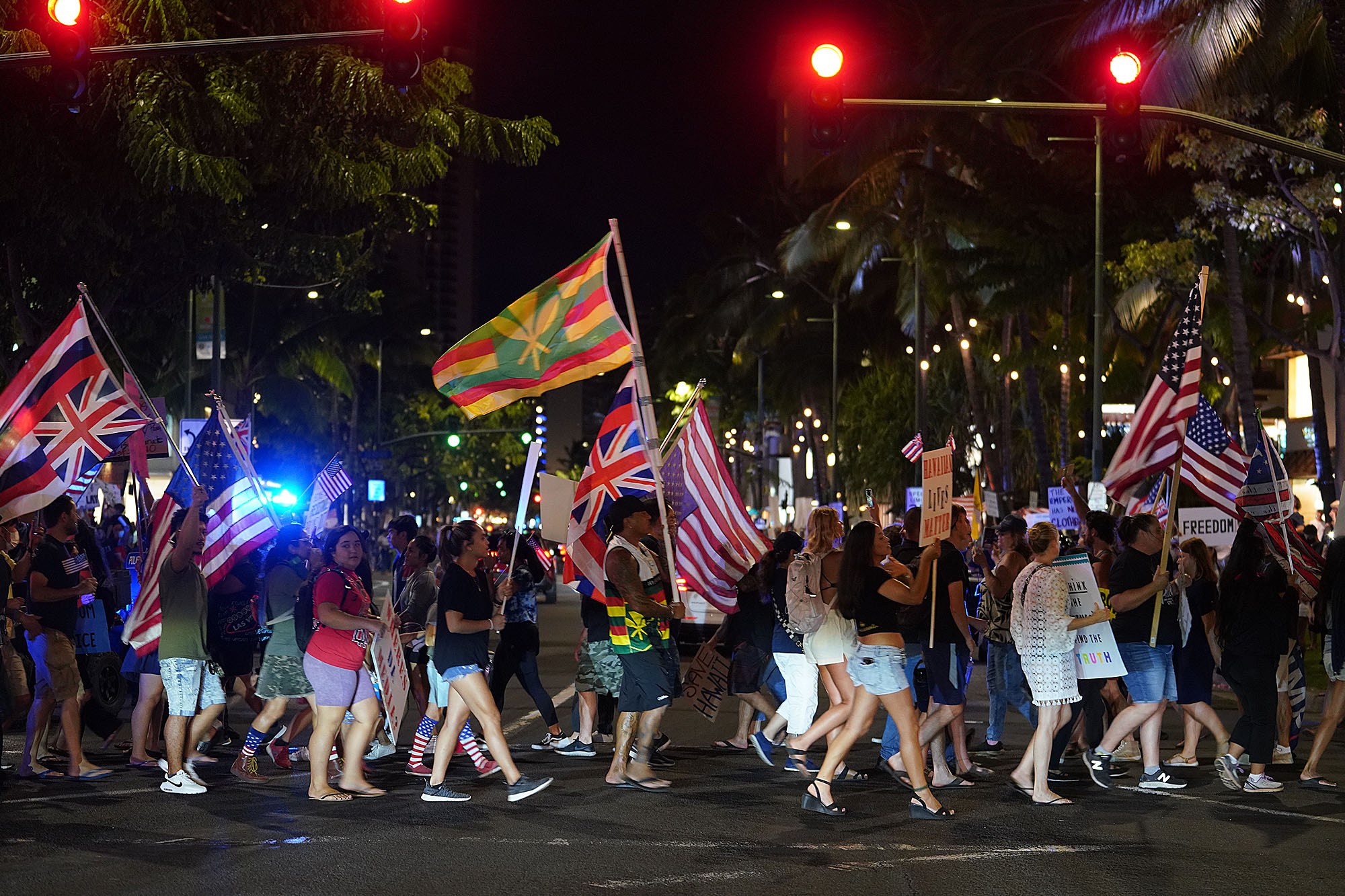 Nobody is forcing anyone to get a Covid-19 vaccination despite what anti-vaccination protesters decry as their loss of freedom to control what goes into their bodies.

Maybe they are demanding the freedom to infect themselves and others with Covid or the right to slowly die on a ventilator, but let’s not go there.

Gov. David Ige’s emergency proclamation of Aug. 5 requires government workers to get Covid vaccinations. Also, a federal directive asks all private businesses in the U.S. with 100 or more employees to impose vaccine mandates.

But nobody is being forced by being held down and jabbed with a needle, as some protesters would like us to believe. Hawaii state and the city and many private businesses offer a way to sidestep vaccination if an employee agrees to weekly Covid tests.

But even that generous accommodation is not enough for the most hard-core shot shunners. A handful of vaccine resisters in Hawaii are refusing both the shots and the option of testing.

When that happens, human resources departments carefully consider, case by case, the request of each person seeking a religious or medical exemption to avoid the shots or to get out of testing altogether while putting the exemption-seeker on unpaid leave until the case is decided.

If employees refuse to get vaccinated or tested, they face “discipline up to and including termination.”

You don’t hear yet of many city or state employees getting fired. However, Honolulu Emergency Medical Services spokeswoman Shayne Enright confirmed that a city lifeguard was fired on Friday for refusing to get vaccinated or to file for an exemption to do weekly testing.

Interestingly, Honolulu lifeguards and other first responders, including police and firefighters — the workers charged with saving lives — are the employees in large number refusing the life-saving vaccinations. More than a thousand have signed on to a class action lawsuit pending in federal court, claiming that the vaccination and testing requirement violates their civil rights.

Attorney Michael Green, representing the first responders, says the lawsuit seeks to invalidate the government mandate asking workers to either get a vaccination or agree to weekly testing under threat of discipline, including firing for non-compliance. He said the mandate should be lifted for all government workers, not just first responders. He said what’s needed is a reasonable Covid testing requirement.

Lawsuits aside — and there are others — the point I want to make is this minority of employees refusing to get vaccinated not only risks the health and even lives of their co-workers — it also unnecessarily costs taxpayers and private businesses money.

The cost can be calculated in the extra time and staffing to process and review requests for exemptions, to keep track of employees’ Covid test results, making sure workers get tested weekly and for the city, shifting around workers to cover for employees to whom the city grants at least two paid hours off per week to travel to and receive their tests.

Also, it is important to point out that weekly Covid testing does not provide the same level of protection to fellow employees as full vaccination. Covid test results are only as good as the day they were taken. Someone who comes to work after a negative test result could contract Covid during the week after the test and affect others.

Tamara Addison, human resources director for Oahu Transit Services, Inc., said in a text that 173 workers, or about 8% of 2,076 workers for the private nonprofit that runs TheBus and TheHandi-Van, have requested testing instead of vaccinations. That’s costing OTS about $10,000 a week for the department’s allowance of the two hours of paid time off per week to get tested.

Nine OTS employees are refusing even the testing.

The City and County of Honolulu also is allowing employees who opt for testing instead of vaccinations two hours of paid time off the job each week.

City employees must apply for a medical or religious exemption to qualify for the testing option.

If the city employees accepted for the testing option fail to keep up with their weekly testing appointments, they are put on unpaid leave until their employment status can be determined. They can be fired.

According to information the city made public Sept. 7, about 9% of some 10,000 employees had refused vaccination and opted instead for testing.

The state Department of Education says about 9% of its workforce is not vaccinated and has been offered the option of weekly testing. DOE spokeswoman Nanea Kalani says fewer than 10 individuals out of 22,000 teachers and DOE office staffers have refused both vaccinations and testing, and as such could be subject to termination.

Wada said in an email that he has not tabulated the extra expense for monitoring, administering and managing employees’ weekly Covid tests as well as reviewing requests from employees to opt out of testing altogether. But he admits, “It is an additional workload, primarily for the HR and Administrative services staff of the departments.”

State employees must pay for their own Covid tests, which they are required to get on their time off work.

When an employee is granted an exemption from both vaccination and Covid testing for medical or religious reasons, the employee must go through a secondary one-on-one review with a person designated by the employee’s department.

The state suggests that designees responsible for reviewing these cases can look to the U.S. Equal Employment Opportunity Commission website for guidance to determine if an employee seeking accommodation is motivated by health reasons or a religious reason generated by a “sincerely held belief.”

Interestingly, the commission says an employer is not required to provide a religious accommodation “if it poses more than a minimal cost or burden.”

Wada says, “If that analysis determines that the employee cannot do all the essential functions of their job while still ensuring the safety of the fellow employees in the workplace, they may be terminated.”

Wada says he can’t think of many jobs that would allow for an unvaccinated and untested employee to work safely with others.

Hawaii has opted for political reasons to offer a small, highly vocal minority a way to duck getting vaccinated and that is the cost we as taxpayers now must bear.

Honolulu labor attorney Jeffrey Harris, in an email correspondence, says public employees have no constitutional right to a religious exemption from vaccination.

He calls it a “fool’s errand” for a government reviewer to try to determine what constitutes a “sincerely held belief” because the legal definition of religion is very broad under U.S. law and it is illegal to give a religious exemption to a person professing belief in one religion and to deny it to another since all religious beliefs must be treated equally.

Harris is a partner in the firm Torkildson, Katz, Hetherington, Harris & Knorek. He has practiced labor and employment law in Hawaii for more than 40 years.

Harris says a key question for both public and private employers is whether granting a religious exemption from vaccination causes more than a trivial or minor cost. If so, the exemption request may be denied.

He says the costs to government and private employers are anything but minimal when you count expenses such as paying employees for time off to get the shots, the recurring administrative costs to verify and record the employees’ weekly vaccination records, and legal costs from civil lawsuits if an employee should file a tort claim saying he or she got Covid-19 because some co-workers were not vaccinated.

All this makes for an interesting discussion of the legal and cost issues employers are facing. Hawaii has opted for political reasons to offer a small, highly vocal minority a way to duck getting vaccinated and that is the cost we as taxpayers now must bear. 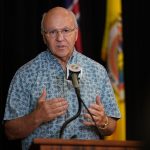 This was not informative nor useful in anyway.  You're creating a stigma for those who hold strong beliefs.  You are also talking about employed people who pay their fair share in taxes.   There are several reasons why we pay taxes and one of those is to reduce inequality.  Testing reduces fear, establishes a safe work environment without discrimination or prejudice.

When you talk about the cost of CV-19, a good place to start is with the initial $2B that the Fed's paid out for the initial development of a vaccine to both Pfizer and Moderna and that was just for phase 1.  Since there isn't a CV-19 playbook to follow, protocols and strategies change almost daily, but the fact remains that testing is the best way to provide a safe environment for others.  Vax status, although helpful, does not provide complete immunity and it is relevant that CV-19 can be contracted and passed to others.  That being said, it would be safest for everyone to be tested under this latest mandate.  Why not?  It's in everyone's interest.  Spend the money on testing, make it easily accessible and free of charge, like the vaccine and we all win.  It not only sends the right message, but treats everyone equally.

I wonder how many of the government employees who refuse to be vaccinated are members of far right groups that oppose other government actions. If that's the case, they should take a hard stand on their values and walk away from their federal/state/county jobs. No one should have to work for an employer that goes against their strongly held personal beliefs. Now that would be a principled action.