How Do You Build A Community From Scratch? This Homeless Advocate Is Trying - Honolulu Civil Beat 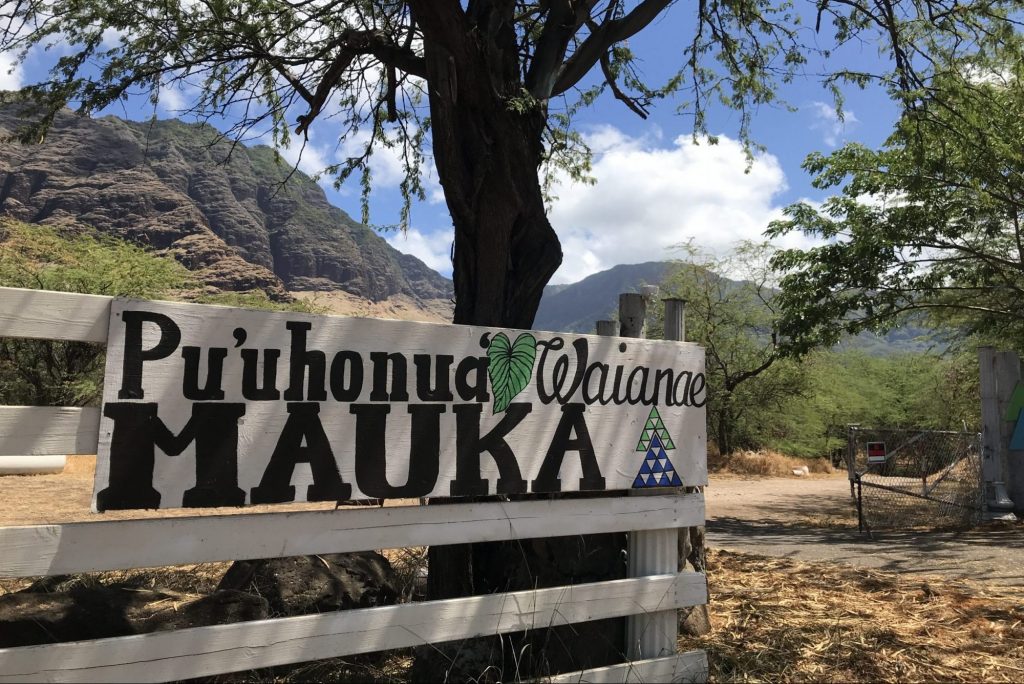 How Do You Build A Community From Scratch? This Homeless Advocate Is Trying

The homeless community that has long occupied space next to the Waianae Boat Harbor has big plans to move to permanent homes at a new site.

Sitting under a popup tent on a swath of land on Waianae Valley Road dotted with young fruit trees and neatly stacked piles of abandoned tires, Twinkle Borge has a clear view of both the future and the past of Hawaii’s largest and longest-standing homeless community.

In the distance, Borge can see the ocean and the distinct A-frame roof of the canoe hale at the Waianae Boat Harbor, where close to 150 people currently live in tents and structures cobbled together from shipping pallets and tarps. Behind her sits nearly 20 acres of long-fallow agricultural land that she hopes will soon contain dozens of carefully designed tiny houses for all those people, alongside rows of fruit-bearing avocado, papaya and banana trees.

Borge, the longtime leader of the community now known as Pu’uhonua O Waianae, has always encouraged people living at the Waianae Boat Harbor to consider themselves not homeless, but simply houseless. Now she’s working to make a place for them to be houseless no longer.

Dynamic Community Solutions — the nonprofit that Borge helped found — purchased the Waianae Valley land in March 2020. The group hopes to start construction on the first tiny homes for the village sometime later this year.

Creating a nonprofit, earning a seat at the table with state lawmakers and community leaders, fundraising nearly $1.5 million to purchase the land — not to mention spending more than 15 years fighting to keep the state from evicting or “sweeping” people from the Waianae Boat Harbor — has been a monumental task.

But her toughest work may lie ahead: Creating permanent homes for an entire community, in a state with exorbitant construction costs and a seemingly intractable affordable housing crisis.

What has made the Pu‘uhonua encampment unique is the strong sense of community among residents and the leadership of Borge, who relies on her ability to forge relationships with everyone from drug addicts to state lawmakers to keep peace, connect people with social services, and prevent campers from being evicted by the state.

Continuing that sense of community at a new location — and building relationships with neighbors who don’t want to see more than 100 formerly homeless people move nearby, are just a few of the challenges facing the project.

Most efforts to house homeless people in any large scale way fail because of the high cost of developing housing and objections from people who live nearby, says James Koshiba, a volunteer on the project and board member with Dynamic Community Solutions.

Borge and the team working with her believe that they can overcome both of these challenges through relationship-building: reducing housing costs by creating communal spaces and using volunteer labor within the community for things like security. They also hope to overcome any disapproval from future neighbors by being good stewards of the land and improving the area through service projects.

If Pu‘uhonua O Waianae’s housing project succeeds, Koshiba believes it can be an example for other communities in Hawaii — and not just ones built to lift people out of homelessness.

“It’s all part of demonstrating that living well as a community together may provide a different model for how to thrive,” he said.

Big Plans For The New Site

DCS purchased the land on Waianae Valley Road on March 6, 2020 — the same day that Hawaii announced its first identified case of Covid-19. The $1.5 million purchase was entirely funded by private donations, Koshiba said.

Borge has long had a vision for a communal village that would provide a more permanent and stable environment for people living at the boat harbor, but for years it was essentially “a pipe dream.”

“I never thought people would give us a chance and listen to us, or even actually believe in us,” Borge said.

When DCS purchased the land, the plan was to roll straight into the next phase of fundraising and quickly begin construction. That all changed because of the pandemic, with workplaces shutting down, the costs of construction materials skyrocketing, and energy at Pu‘uhonua shifting to keeping Covid-19 out of the community.

Instead, Borge and residents from Pu’uhonua have spent the last 18 months working to rehabilitate the land, Koshiba said. They’ve cleared out old tires that littered the property, hauled out old cars that had been hidden and abandoned in the brush, dug out playground equipment dumped on the lot.

They’ve also been working with architects, engineers, and farmers to refine their plans for the site. Early plans for the village featured a mix of individual one-room structures and larger communal cooking and living facilities, along with shared bathrooms and showers.

The exact details of the project are still being ironed out. Koshiba says the city’s Department of Planning and Permitting has been very helpful, and that licensed architects are going to make sure all the structures meet all safety requirements.

The community is able to bypass certain zoning and permitting requirements, Koshiba says, because it was essentially grandfathered in as a project under Gov. David Ige’s last emergency proclamation on homelessness. The proclamation, which has since expired, suspended a number of laws and ordinances related to housing construction, paving the way for several other innovative housing projects to move people out of homelessness, including Kahauiki Village.

While Borge and her crew have been cleaning up the property, they’ve also been refining their farming plans. About half the land will be dedicated to growing tree crops like avocado, papaya and banana. The crops will be used to feed people living in the community.

“An idea we’re trying to test and demonstrate is that having a tight-knit community and people that can live as a community makes it possible to actually also live more affordably,” Koshiba said.

Even if DCS can raise funds for all the construction costs and keep the community debt-free, it will still need a regular income stream to cover operating costs like water, electricity and property taxes. Koshiba says they are trying to keep rent — or what they refer to as a “community contribution” — to an average of $250 a month per household.

People who can’t afford that will be able to put in sweat equity and contribute to the village in other ways. For comparison, Kahauiki Village, which was built on land leased from the state for $1 a year, charges $725 a month for a one-bedroom unit.

The Importance Of Community

Scott Morishige, the state’s homelessness coordinator, says he supports any effort to increase the state’s housing inventory. But he’s hesitant to say that Pu‘uhonua — in its current form at the Waianae Boat Harbor or its planned future location — is a model for others in the state to follow.

What he’s taken away from years of working with Borge and spending time at the makeshift village at the Waianae Boat Harbor is the importance of community.

“That sense of support and community is just as important, if not more important, than actually having a roof over your head,” Morishige said.

Communal housing isn’t for everyone, Morishige said, but there are definitely some people who really benefit from that type of support.

Outreach workers have told Morishige that often when they find permanent housing for someone who has been living in an established homeless encampment, it takes days before the person starts sleeping in their new apartment because it’s so difficult being disconnected from people they had been living near.

Morishige says in the last five years, there’s been a shift in Hawaii — both within his office and among service providers in the state — to try and tap more into that sense of community among many people experiencing homelessness and figure out how to foster different types of housing models.

That transition can in part be traced back to Borge and the Waianae community.

In the last six years, Borge has become something of a state celebrity and an outspoken advocate for people experiencing homelessness in Hawaii. Borge has flown to neighbor islands — and even the mainland — to talk to community leaders and lawmakers about efforts to address homelessness in their communities.

“I think the value of the Pu’uhonua is that because they were very active in telling their story, they made a really clear effort to communicate what made their community unique,” Morishige said. “And I think that helped people in the broader community better understand the need for that type of community support.”

Demonstrating their value as a community is one of the ways that people living at the Waianae Boat Harbor have been trying to overcome objections to their future move to Waianae Valley Road.

When news spread that Borge’s nonprofit was purchasing the land, someone distributed flyers to mailboxes throughout the community that said in capital letters, “WE MUST STOP THE HOMELESS COMMUNITY FROM BEING BUILT.”

“It hasn’t been an easy road,” Borge said.

Borge said she and others from the nonprofit went door-to-door introducing themselves to people in the community. And they’ve stepped up their community service efforts.

“It’s much harder to oppose an affordable housing development in your community, when homeless folks are actually showing up at the neighborhood board meetings and saying, ‘Here’s what we’ve done this week to serve this community,’” Koshiba said.

People from Pu‘uhonua helped clean up the bathrooms at Pokai Bay. Twice a week — when they have extra food to share — members of the group’s outreach team drive up and down the Waianae Coast conducting their own outreach to homeless people living in the area — bringing them food, working to help connect them with services.

It’s unclear, however, whether those efforts have been successful in winning over new neighbors.

Borge said she chose the Waianae Valley Road location in part because many people living at the Boat Harbor have family living near that location. The road is also serviced by DaBus, which will make it easier for people to get in and out of town.

She hopes having a permanent home, along with the possibility of a closer connection to their families, will help many of the people living at the Waianae Boat Harbor improve their lives.

“Maybe once if the people come and do move back home, maybe they will start feeling better about themselves,” Borge said.

Still, the move will be hard for many people who live at the Waianae Boat Harbor.

Rose Loke Chung-Lono, who has lived at the harbor for more than a decade and helped Borge organize the nonprofit, said she feels a strong connection to the land there — and in particular, the trees — that have sheltered her for so long.

But, Chung-Lono said, she’s walked around the new property enough to know that the trees there need caretaking too. She is hoping for a spot at the new village that looks down on the boat harbor, so she can feel connected to the old site.

Having Chung-Lono settled into her new home, welcoming everyone from the Boat Harbor site into permanent housing — that’s what Borge said she is looking forward to.

“It’s our forever home,” Borge said. “You never hear me say, ‘This is my property. You will always hear me share, ‘This is ours.’”